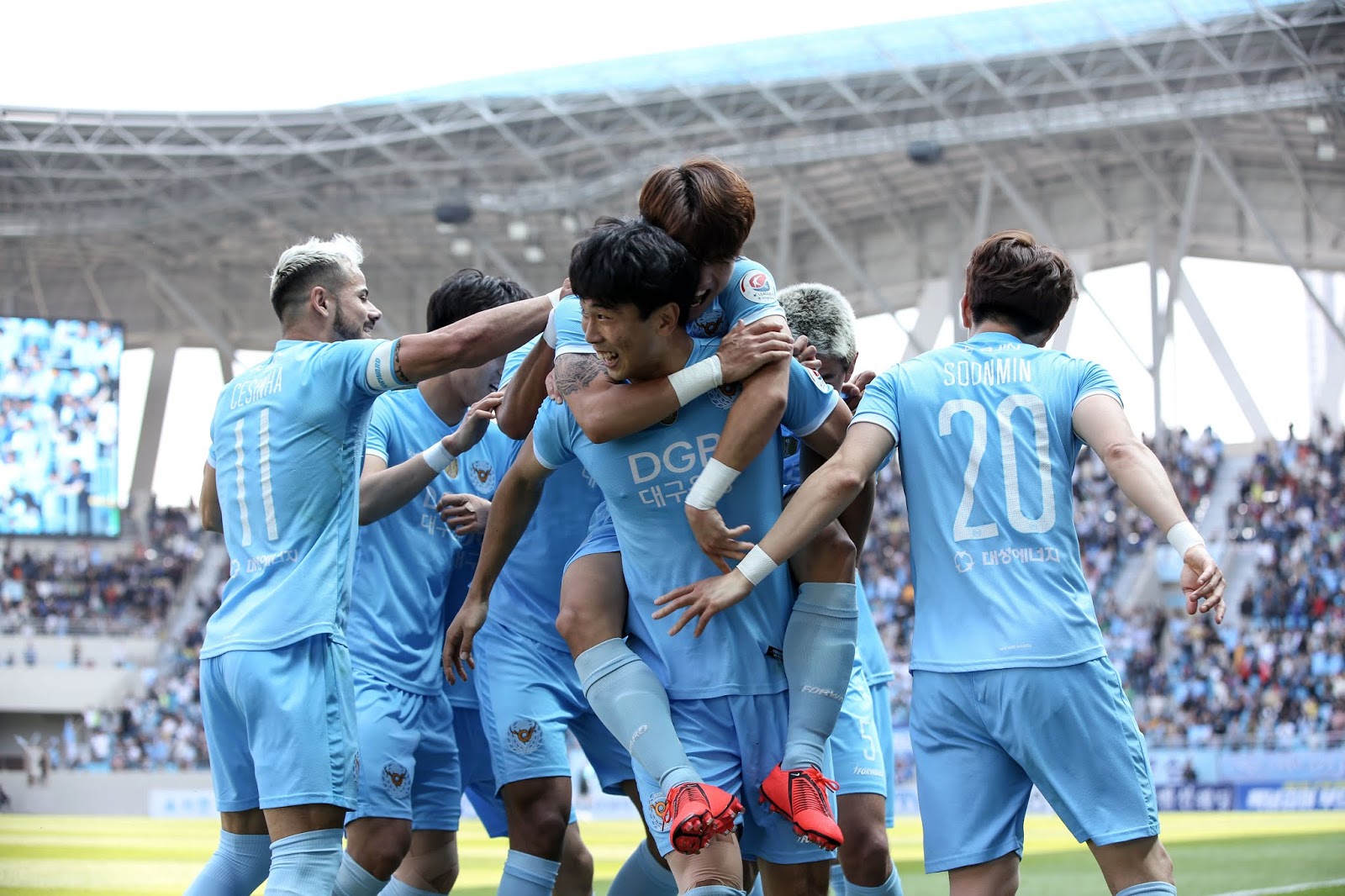 As the K League 1 enters its ninth round, three sides sit atop of the table level on points and separated by goals scored. Sunday afternoon sees two of them go head-to-head as first placed Jeonbuk Hyundai Motors hosts third placed FC Seoul with Ulsan Hyundai looking to capitalise later on as they take on Gyeongnam FC. Elsewhere, Friday night football returns as a Pohang Steelers side under new management welcome Suwon Samsung Bluewings, while Saturday sees a winless Jeju United take on an out of form Sangju Sangmu. All this and more in your guide to Round Nine.

Friday night football returns to the K League 1 this weekend and this time it sees Pohang Steelers welcome Suwon Samsung Bluewings to The Steel Yard as both sides try to improve on positions a far cry away from their pre-season expectations. All eyes will be on the Pohang dugout however as caretaker Kim Gi-dong takes the helm for his first match since being officially appointed on Tuesday after the club parted ways with Choi Soon-ho. Kim is very familiar with the club, having played for the side between 2003 and 2011 before taking up a role on the coaching staff in 2016. His first task though will not be easy given that he will be without two of the club's winter signings in David da Silva and Vladan Adžić who sit out with suspension.

Suwon Samsung Bluewings are a side that have undergone some initial teething problems with their new manager Lee Lim-saeng, but things slowly seem to be turning around after guiding his team unbeaten through their last six fixtures across all competitions. There will be some disappointment in their last result however, a thrilling 3-3 draw with Gyeongnam FC in which Suwon defender Hong Chul had seemingly snatched all three points at the death, only for his side to cede an equaliser moments later in injury time. Prior to these three goals conceded, Suwon had only allowed one in their previous five and it may be no coincidence that this may have been due to the absence of centre-back Jo Sung-jin who was injured for the Gyeongnam game. Manager Lee will certainly be hoping his defender will be fit enough to return for Friday's clash.

Both Sangju Sangmu and Jeju United head into this fixture with some of the worst form in the league. The home side are rooted to the foot of the table and are the only remaining side across both professional divisions yet to chalk up their first win. Last weekend saw their unwanted streak continue after they were humiliated by a ten-man Gangwon to the tune of four goals to two. Forward Magno Cruz managed to score both of Jeju's goals but the worry is whether or not anyone else can convert. Despite the signing of Aguilar and Yun Il-lok in the winter transfer window, two players renowned for their chance creation capabilities, the goals are still yet to arrive. Jeju lead the league in key passes and also passes into the final third yet have found the net just six times. Only Incheon United have scored fewer this season.

After their promising start in the opening three rounds, Sangju Sangmu continued their winless run into their sixth game, with just one goal scored during that period. Admittedly, there is no shame in defeat to the K League reigning champions Jeonbuk Hyundai Motors, but the manner of the defeat will not have instilled confidence in manager Kim Tae-wan. There are new recruits lined up to join for the summer but, until then, the manager may see this as a winnable fixture that could help arrest their slide down the table.

Gangwon FC enter Saturday's match off the back of a convincing 4-2 win against Jeju United, despite having ten men for the majority of proceedings and prior to any goal being scored. The red card handed to Lee Jae-kwoun will mean he misses the next two matches but the majority of the same squad should still be available for selection. Daegu would be wise to play close attention to youngster Kim Ji-hyun. The 22-year-old attacker has featured in all eight rounds in some capacity but only for an average of 49 minutes per fixture. However, in his brief appearances, he has scored three league goals plus one in the FA Cup, resulting in increased playing time of recent. He could certainly be hoping to continue his progress on Saturday.

Daegu FC suffered defeat midweek at the hands of J.League outfit Sanfrecce Hiroshima, losing 1-0 at home and making qualification to the knockout rounds considerably trickier. However, the club's league form has been impressive of late, with the side running out 3-0 winners last weekend against Pohang Steelers. Manager André will be without his team's top-scorer Kim Jin-hyuk however, who has been a mainstay in the Daegu attack this season. Kim has began his military training and made his farewells to the crowd at the weekend. Fortunately, striker Edgar Silva has returned form injury, starting in the Champions League match midweek. He will be expected to take up the goal-scoring mantle once more.

Life in the league without former manager Jørn Andersen finally got underway last weekend as Incheon United traveled to face a high-flying FC Seoul in the first Gyeongin Derby of 2019. Caretaker manager Lim Jung-yong set out his side to stifle his opponents however and earned a hard-fought goalless draw to give the side their first point in six matches. Given that his team continues to be without key attacking talent Stefan Mugoša through injury, shoring up the backline will likely continue to be Lim's priority over the next few rounds as he steadies the ship for his eventual replacement.

Seongnam FC, on the other hand, are defying those who predicted them to struggle after moving up the table to 5th with an unlikely victory over title-chasers Ulsan Hyundai. They may consider themselves lucky in some respects given how proceedings went, yet they can be encouraged by a clean sheet and perhaps a feeling that they do once again belong at this level after two years in the second division. Incheon should be wary of the threat posed by Éder. While two goals is certainly not startling, the winger boasts championship-winning experience from his time at Jeonbuk and was important in Seongnam's promotion push last season.

Jeonbuk come into this game after a positive result midweek where they defeated J.League side Urawa Red Diamonds for the second time in a fortnight in the AFC Champions League. Manager José Morais opted to use the strongest side available to him for the clash, but with the fixture being in Jeonju, his players should be well recovered to go again on Sunday afternoon against bitter rivals FC Seoul. Son Jun-ho will be unavailable however after being sent off in the team's previous K League match against Sangju Sangmu. Lee Seung-gi or Han Seung-gyu are likely to deputise for the former Pohang Steelers man. Jeonbuk are also without a number of players through injury including Adriano and Ibini, yet right-back Lee Yong made it to the bench on Wednesday night and could be set for his first appearance of the league campaign come Sunday afternoon.

FC Seoul are having a season far removed from last year's disastrous campaign and surprisingly find themselves in the early days of a title race. A victory in Jeonju would likely seal their credentials as title-chasers yet they will know full well how difficult to achieve, having last won away to Jeonbuk on the final day of the 2016 season to lift the title. Having recently been thwarted in the Gyeongin Derby however, manager Choi Yong-soo may choose not to experiment with his lineup to the same extent as he did in that match. Choi will be hoping striker Aleksandar Pešić can find his scoring boots again after bagging three goals in two league games prior to the Incheon match as he may prove the best chance of breaking the champions' resolve.

The final match of the weekend sees two sides fresh off the back of midweek AFC Champions League action. Tuesday evening saw this Sunday's hosts Ulsan Hyundai travel to Japan to take on J.League champions Kawasaki Frontale in what transpired to be a hard fought and well-earned draw for the Horangi. Having also dropped points the weekend prior in the league to Seongnam FC, Ulsan will certainly want to capitalise on the result in Jeonju with victory here and not let the opportunity to potentially return to the summit slip them by. Manager Kim Do-hoon fielded a full strength squad in Japan and is likely to do the same this weekend, although he will be without the services of midfielder Shin Jin-ho who sits out through suspension.

Gyeongnam FC returned to Korea after a midweek away match in Japan against reigning Asian champions Kashima Antlers. Claiming an unlikely victory, Gyeongnam can come back to their league responsibilities buoyed after previously enduring some inconsistent form. Last weekend, for the second time this season, they rescued a 3-3 draw in injury time thanks again to a Bae Ki-jong equaliser. It was Kunimoto however who found himself on target against Kashima, but the man who assisted him, Jordan Mutch, will not be available as he serves the second game of his suspension.

If you would like to download this episode, you can find The K League United Podcast on a number of platforms linked below. You can also catch the show every Thursday on Football Nation Radio.