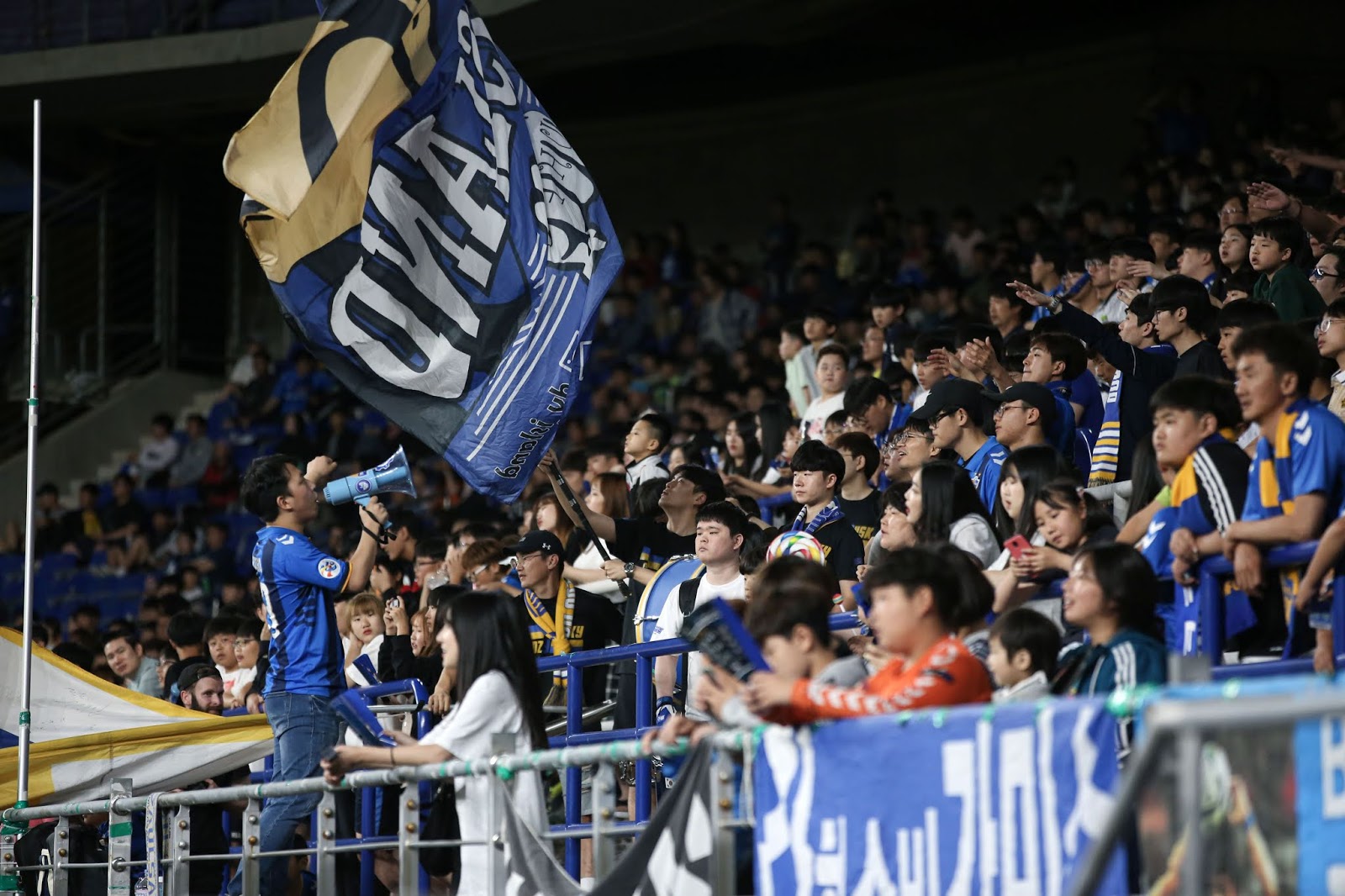 K League 1 returns after the international break with an eye-catching schedule as the season enters the summer months. Saturday evening sees all of this year's AFC Champions League sides take stage, with the highlight undoubtedly being the East Coast Derby between Ulsan Hyundai and Pohang Steelers. Sunday evening sees two more matches with the headline act in the form of a Super Match between FC Seoul and Suwon Samsung Bluewings. These fixtures and more previewed in K League United's guide to Round 16.

Saturday evening sees one of the division's lowest scorers play host to the K League's leakiest defence as Seongnam look to put an end to their seven-match unbeaten run when they host last year's runners-up Gyeongnam FC. Seongnam have only scored three times in their last seven games but had been holding strong at the back until recent rounds. Heavy defeats to Ulsan and FC Seoul have caused concern and a goalless draw against a ten-man Incheon United side in the last round will have done little to allay the fears of the support. Unsurprisingly, Seongnam currently boast the unwanted title of the lowest shooting accuracy in the league, with just 32.32% of their attempts on target. Manager Nam Ki-il will be hoping this weekend's opponents may continue their generosity, however, as he looks to keep his team away from the relegation positions until he can bring in a new striker in the soon-to-be-open summer window.

Gyeongnam have continued to not fare well this season, with their last league win coming in March against Daegu FC eleven rounds ago. The team have been scoring though, having only been shut out on three occasions during this period, but the winter departures of Choi Young-jun and defender Park Ji-soo have really left their defence exposed. The side have faced the third highest number of shots in the league this season, ranking close to bottom for interceptions, defensive duels and shots blocked. It is little wonder why they are averaging over two goals shipped per game this year as they continue to invite pressure. Manager Kim Jong-boo will be hoping the international break will have given his team ample time to work on the training ground as they look to better their position and move away from near the foot of the table.

Ulsan Hyundai's last defeat in the league was six rounds ago to their bitter rivals Pohang Steelers and they will be afforded a chance to act out revenge this weekend when the Steelers head to the Munsu Football Stadium. Ulsan Hyundai will also have one eye on their knockout leg with Urawa Red Diamonds next Wednesday, but manager Kim Do-hoon would be unlikely to rest key personnel for a derby that means so much to their supporters, especially as the Horangi continue to chase Jeonbuk in the title race. One player that could be of importance to the manager is midfielder Kim Bo-kyung. Since returning to the K League at the start of the year, Kim has been turning in some sensational performances, scoring five goals and earning a recall to the Korean National Team in the process. Pohang will undoubtedly have to be wary of the threat the former-Cardiff man poses.

Pohang Steelers come into this match on the back of some worrying form, picking up just one point in their last three and losing their last two, scoring zero goals in the process. One player that manager Kim Gi-dong will be hoping for a strong performance from is attacker Kim Seung-dae. Kim only has three goals to his name this season, yet is vital to the construction of chances in this Pohang side, racking up four assists and boasting the fourth highest number of through passes in the division. Having also scored the winner when these two sides last met, he is certainly the player to watch in this weekend's East Coast Derby.

Saturday evening also sees both ends of the table clash as a struggling Incheon United side welcome a title-chasing Jeonbuk Hyundai Motors. Incheon's results have picked up in their last two rounds, recording a win and a draw against other relegation-threatened outfits Jeju United and Seongnam FC respectively, with recently installed manager Yoo Sang-chul seemingly seeing his recently employed methods taking hold. Incheon will be without Jung Dong-yoon this weekend after the defender saw two yellow cards in his team's match against Seongnam in the previous round.

Jeonbuk Hyundai Motors head into this game knowing that, while they have a crucial AFC Champions League fixture midweek, they cannot afford to drop many players and potentially cede ground in the three-way title race that is forming between themselves, Ulsan and Seoul. This match will also see winger Moon Seon-min return to his former club. Moon has been on form for Jeonbuk in recent weeks, scoring three in the last two rounds as well as assisting another. Could he come back to haunt his previous employers? One player that manager José Morais will be without is influential left-back Kim Jin-su. Kim saw a straight red for a bad tackle in Round 15 and will sit out of league duties for the next two weeks.

Daegu ended their two-game goal drought with a solid 2-0 victory over Pohang Steelers in Round 15. It is also worth mentioning that, while they have been trying to rediscover their goalscoring touch, they have not conceded in their last three matches despite two of those being against title contenders Ulsan Hyundai and FC Seoul. Daegu have looked good value this season, with their lofty position of fourth being a natural progression from their last season form last year which saw them lift the FA Cup. Boasting the second youngest side in the division, it is players like Kim Dae-won and Jung Seung-won who have really come to the fore the season. However, it continues to be Cesinha who takes the headlines. The Brazilian is the most fouled player in the league, possibly because he is one of the most feared. He leads the number of shots in the division and also has a sizable involvement in the team's attacking build-up.

Gangwon FC continue to defy early season predictions of struggling as they sit in sixth. The team have not won in three outings however and are expected to face difficulties against a Daegu side who defeated them 2-0 when they met earlier this year. Fortunately for Gangwon, the return of Uros Đerić's scoring form, with the striker find the net three times in the last four matches, should bolster them just in time for the summer run-in. Having finished second in an enthralling golden boot race last season, the Serbian's return will be very much welcome by the Gangwon faithful.

Having been unable to overcome Jeonbuk, despite having a man advantage for the majority of proceedings, Sangju Sangmu look to bounce back when they welcome a struggling Jeju United side on Sunday evening. The military side are still fifth, however, and are performing above initial expectations, although their recent form has been fairly inconsistent with the team not charting two consecutive outcomes since March, whether it be a win, loss or a draw. Striker Park Yong-ji will be key if they are to achieve a positive result. Park has clocked up six goals for the campaign so far, five of which being the first goal in a game, placing him joint second in the golden boot race. With three of those goals coming in the last month, the player is in fine form and may well be hoping to capitalise on Jeju United's poor showings.

Despite the managerial upheaval, Jeju United still find themselves one position above the bottom by the number of goals they have scored. Having kept just three clean sheets all season though, and having conceded the second highest number of goals all season (26), their defence has proven itself to be overly-welcoming to opponents. Their two biggest threats available will be their two foreign attackers Magno Cruz and Tiago Alves, each with four league goals for this year. However, the Islanders are without key player Elías Aguilar, one of the league's most proficient passers, as the midfielder is on international duty with Costa Rica.

The K League's biggest rivalry plays out for the second time this season on Sunday evening, as Suwon Samsung Bluewings travel to Sangam to face FC Seoul in the Super Match. FC Seoul have found themselves performing well this season, with the capital club sitting just two points off the league summit and a far cry from their eleventh-placed finish last season. Manager Choi Yong-soo has certainly reinstilled some life into this team, with signings such as Aleksandar Pešić adapting to life very well in his new surroundings, scoring seven goals and leading the scoring charts. The striker was injured for the first Super Match of the season and Seoul visibly missed the threat he provides. If he features this Sunday, he has an opportunity to write his name into the history books of this heated fixture.

Suwon Samsung Bluewings come into this match off the back of both an exciting yet frustrating 1-1 draw with Gangwon FC, costing them further ground in the league as they continue to play catch up after their poor start to the year. It has been a while since Suwon last claimed a league victory over Seoul, with their fans having to remember back to April 2015 when their team claimed an astonishing 5-1 victory over the capital club. You need to head back six months earlier to find the last time they won at Seoul. Still, with players such as Australian international striker Adam Taggart in the side, someone with five league goals to his name in this campaign, there is a hope that perhaps the Bluewings could pull off an upset and dent their rival's title hopes.