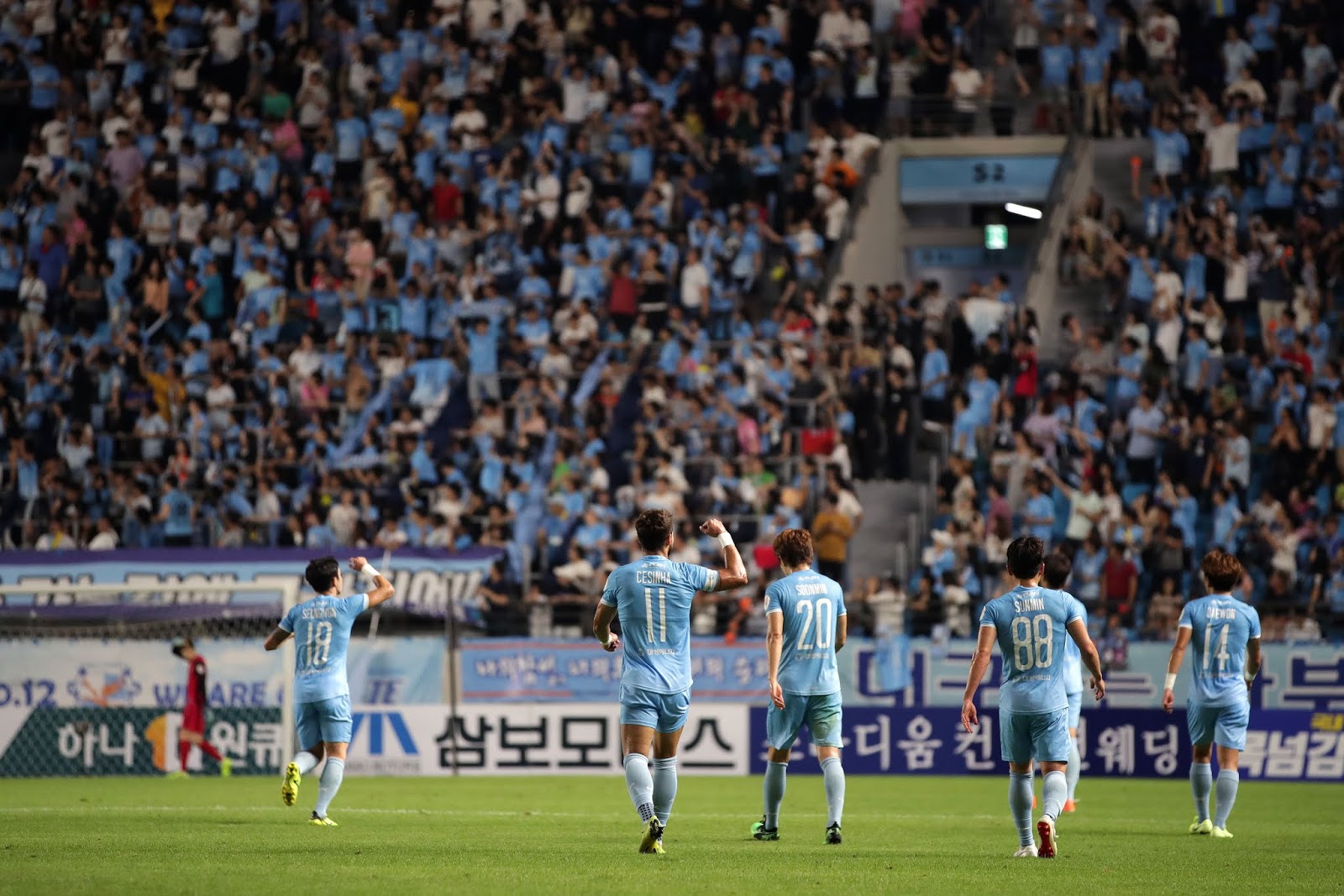 This weekend sees the final round of fixtures prior to an international break and many teams will be wanting to head into the fortnight under positive circumstances ahead of the K League 1’s final run-in. Suwon Bluewings open the weekend this Friday evening as they host Jeju United before Pohang Steelers play Seongnam in a battle between 9th and 8th. However, the marquee match of the weekend sees champions Jeonbuk Hyundai Motors travel to rivals FC Seoul on Sunday evening as the away side look to keep up the chase for this year’s title. These games and more in K League United's preview to Round 28.

Suwon Samsung Bluewings were left stunned last time out as they fell 2-0 to a struggling Gyeongnam FC in Changwon, undermining there strong showing against Gangwon FC the week prior and making it four losses in their last six outings. Worryingly, they have lost three of those matches at home but can perhaps find comfort in their last home win coming against Jeju United in the first week of July. As always, Suwon will be hoping their star striker Adam Taggart will be firing once more. The Australian has a whopping 16 league goals this season and will fancy his chances against the league’s most leakiest defence. Suwon will be without Jeon Se-jin for this encounter after the 19 year-old attacker collected his third yellow card of the season against Gyeongnam.

Jeju United salvaged a late point through a superb 93rd minute Aguilar free-kick against third-placed FC Seoul, a point which lifted them off the foot of the table and up into eleventh. Jeju have still not won in seven matches however, and are going to need to start turning some of their draws into victories if they are to escape potential relegation. Jeju have also been struggling to score of late, finding the net just twice in their last four outings. Their top scorer continues to be former FC Seoul winger Yun Il-lok with eight goals to his name for the season. With no suspensions to be concerned with, manager Choi Yun-kyum should have a full strength selection to select from for this encounter.

A wonderful Wanderson display salvaged a victory for Pohang Steelers in their last match where they let a 3-1 lead slip to Incheon United in addition to losing striker Stanislav Iljutcenko to a red card. With the scores tied at three apiece, Wanderson’s two late efforts, in addition to his first-half goal, ensured the home fans left happy and the influential winger left with the match ball. He even assisted Pohang’s two other goals in that game, just to further underline his influence. While Pohang may rue the loss of their striker Iljutcenko for this match, they at least have one player they will be able to rely on for this weekend’s encounter.

Seongnam put in a well organised performance to stave off what was a dominating Jeonbuk display. The Magpies had initially taken the lead through a Lim Chae-min penalty, but were pegged back late on, leaving Jeonju with a welcome draw. Seongnam have been in good form of recent, dropping just four points over their last six matches, claiming scalps against Suwon Bluewings and FC Seoul along the way. Manager Nam Ki-il will be without Lim Seung-gyeom who is suspended through yellow card accumulation, while influential winger Éder seems likely to also be sidelined as he makes his awaited return from injury.

FC Seoul come into this enchanted against rivals Jeonbuk off the back of some inconsistent form. The Capital club have picked up just five points in their last five outings since their 4-2 defeat to Jeonbuk in July, and see fourth place Daegu gradually closing the gap to seven points. With Seoul ten points off 2nd placed Jeonbuk, Choi Yong-soo’s team are caught somewhat adrift in third with little chance of bettering their position but a lack of focus could see them lose it if not careful. Seoul drew 1-1 with a then-bottom Jeju United in the last round, conceding in the final minute after another under-par display. Fortunately, Choi has no players suspended for this fixture and will be hoping a notable victory against the champions could give his team and their fans the required lift before the international break.

After wrestling top spot away from Ulsan the week prior, Jeonbuk Hyundai motors ceded their place at the summit after struggling against a well-organised Seongnam FC outfit. It took a late Samuel Rosa effort to give José Morais’ men a point to takeaway. It did extend their unbeaten run in the league to sixteen matches although that will matter little if they are not able to keep up with the league leaders. With a fully fit squad, free of suspension, Jeonbuk will look to also extend their unbeaten run against Seoul on Sunday, a run that stretches back seven matches, whilst hoping results elsewhere fall in their favour.

Gangwon’s attacking form a few rounds prior seems to be quickly fading after they lost 3-1 to Daegu FC, making it their fourth match in a row with a victory. They have also conceded three goals in three of these last four games, implying that the decline attacking form is bringing defensive lapses to the fore. This could be made worse this weekend as defender Yoon Seok-young is forced to sit out this encounter through yellow card accumulation. Gangwon have won both encounters with Gyeongnam this season though and will remain confident of continuing this run on Sunday.

Gyeongnam recorded another home victory last time out, seeing off the traveling Suwon Bluewings by two goals to nil. It was the Reds’ second home win in a row and only their fourth of the season, a far cry from last season’s campaign where they finished runners-up. The victory moved the side three points clear of the relegation spots and saw summer addition Uroš
Đerić add two more goals to his tally. Last season’s second-highest top-scorer has four goals in six games since moving south to Gyeongnam from Gangwon and will be hoping to come back and haunt his former employers this weekend. The away side will be without midfielder Ha Sung-min, however, who sits out through suspension.

Incheon United left Pohang deflated last weekend after the elation of their spirited comeback from 3-1 down was short-lived, eventually losing 5-3 and sinking to the bottom of the table. Incheon United had looked to be turning a corner in recent weeks, picking up a number of hard fought points with their defence looking increasingly solid thanks to their summer additions such as Rashid Mahazi (who was absent from proceedings). However, they succumbed too easily on Sunday evening and will be concerned about the damage the league leaders will be capable of inflicting.

Ulsan Hyundai saw off military side Sangju Sangmu 5-1 to take advantage of Jeonbuk’s slip up elsewhere and regain control of the title race. It was a comprehensive performance from the Horangi and saw them return to winning ways against tricky opposition after being humbled by the champions the week prior. Amongst the goalscorers was once again midfielder Kim Bo-kyung. Kim has been a revelation since returning to the K League last winter, notching up eleven goals and six assists so far this season. If Incheon are to stand any chance of coming away with points, they would do well to keep the former Kashiwa Reysol player quiet in this encounter. Ulsan will be without Kang Min-soo as well as manager Kim Do-hoon who will be sitting out his third match of a five game touchline ban.

Off the back of the aforementioned humbling at the hands of the Horangi, Sangju Sangmu will look to bounce back this Sunday against Daegu. Up until the last round, Sangju had been faring well, winning three games on the bounce to help maintain their stay in the top half of the table and they will quickly want to get back to winning ways, especially with twelve players, many of whom are key, set to leave in two rounds time and return to their parent clubs. Sangju are on course to finish in the top half for the second time in their history, but know they have a better chance of collecting points now than they do in three weeks time. Manager Kim Tae-wan nearly has a full selection of players to call upon, although he will have to make do without defender Kwon Wan-kyu who is suspended for this encounter

Daegu FC returned to fourth in the league after defeating Gangwon FC 3-1 at home. Daegu had been struggling up until recently, but looked to have turned a corner since the return of striker Edgar to the side a few rounds ago. The forward's return has not only given the citizen club a boost to their attacking options, but has freed up midfielder Cesinha to allow him to create more opportunities for this teammates. Not all went well for the home side as left-back Kim Dong-jin was shown a direct red card for a foul, initially ruling him out for this weekend’s encounter. However, after review from a disciplinary panel this week, the card has been rescinded.