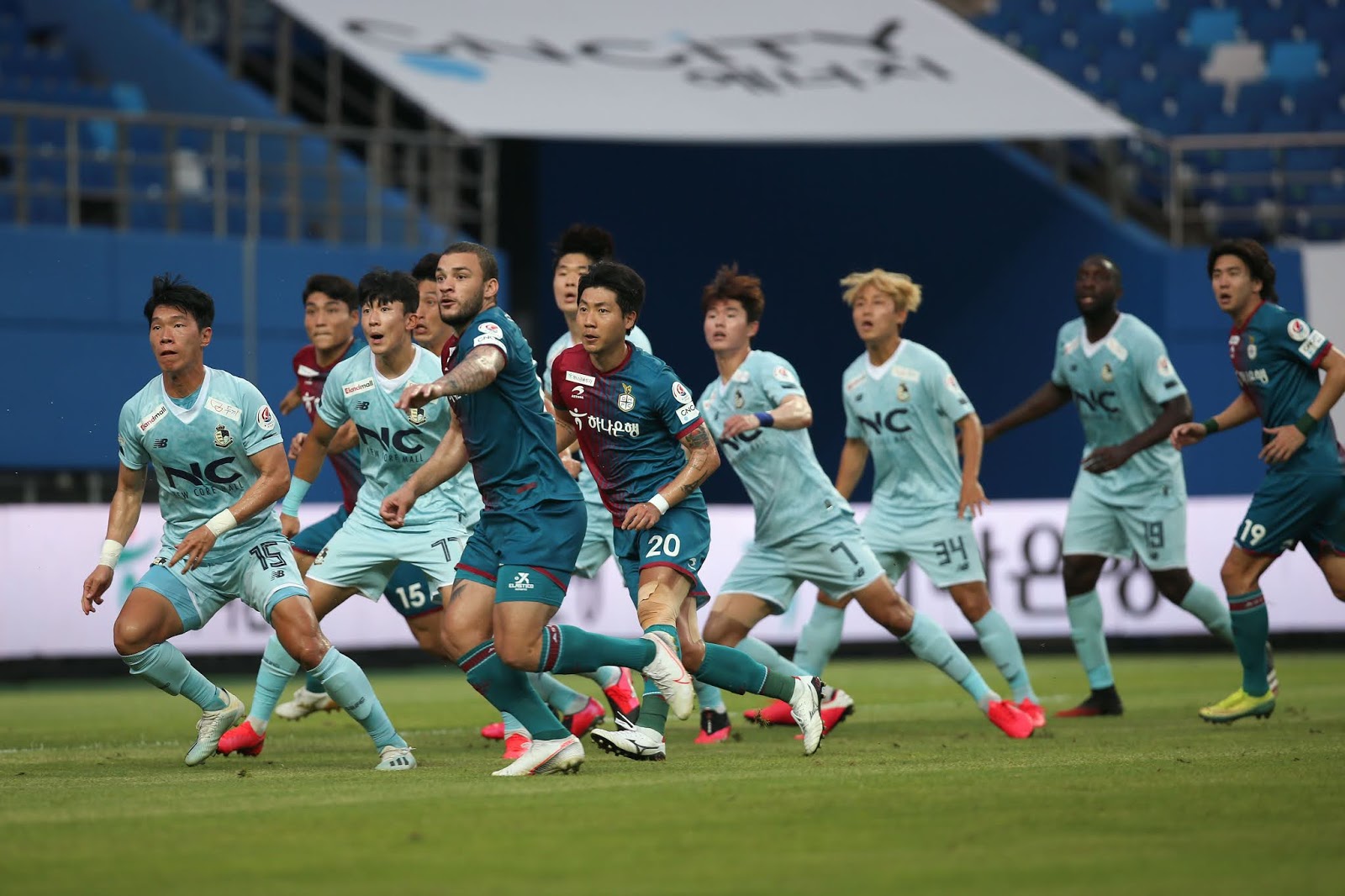 With Jeju United's win over Daejeon Hana Citizen last weekend, it's currently a two horse race for the title between them and Suwon FC heading into this weekend.  Both sides have relatively winnable matches as Jeju goes on the road to face a Bucheon FC 1995 side who have lost their last six, while Suwon FC are also away from home to visit a Chungnam Asan side who have won only once on their home patch in 2020.  K League United Jeju columnist Branko Belan looks at the match, team, and player to watch in Round 20. 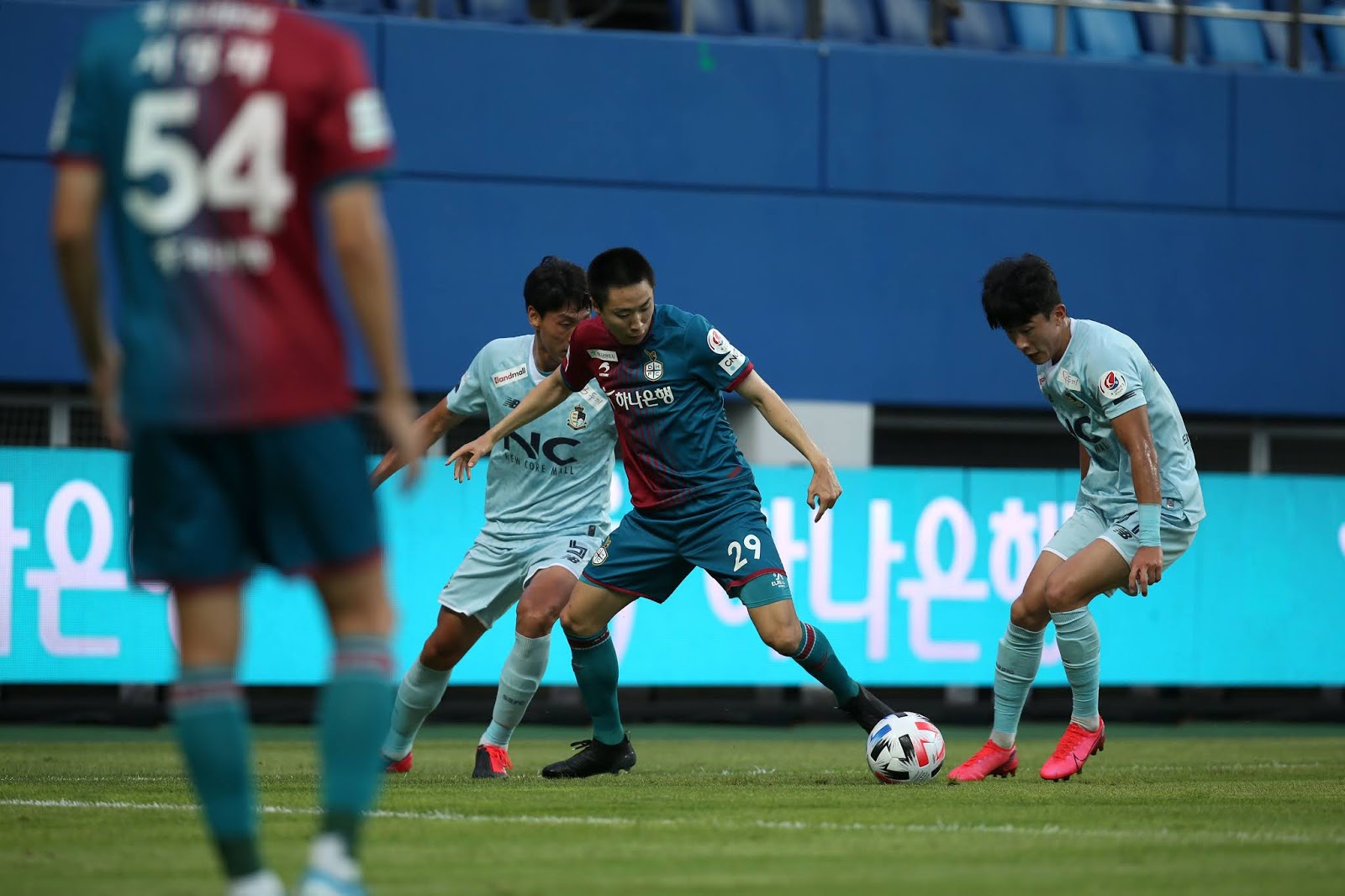 The recent departure of Hwang Sun-hong has initially had a negative impact on the club as they fell by a two goal margin last weekend to league leaders Jeju United.  Andre Luis was left out of the squad for the first time this season, and his absence was felt.  The Brazilian's twelve goals rank second in the division and his presence will be critical if the side is to bounce back from a loss against a team they had beaten twice before this season.  Daejeon simply must play their best players if they are to mount a challenge for first place, but the way things look currently, a playoff place may be the best they can hope for.  It is essential for the Purples to get a result at home this weekend.

How Seoul E-Land finished on the wrong end of the result against Chungnam Asan last weekend is remarkable to say the least, considering how dominant they were in the second half.  Leandro has been a constant threat for them this season and has quickly established himself as one of the most dangerous offensive players in the division.  They are currently only two points out of a playoff position but also face Suwon FC away next week and then Gyeongnam FC the following week at home.  Consider that they finish the season away to Jeju United on November 1st and then finish their schedule at home against Jeonnam Dragons on the 7th and it is easy to see how important it is for them to take their opportunities as the season winds to a close. 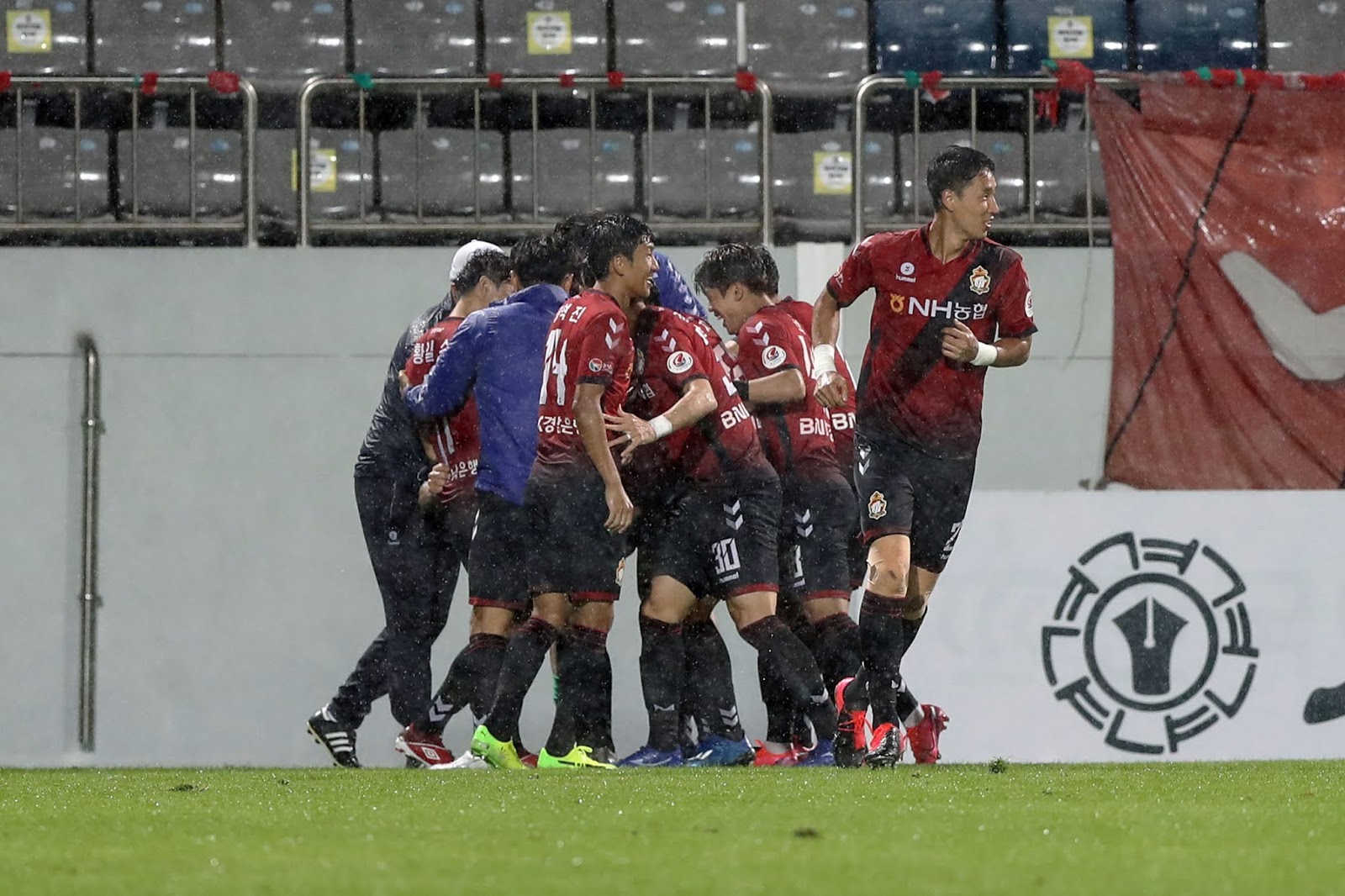 While they come into weekend play on the back of consecutive draws, the Reds' match-up with Ansan Greeners is the beginning of a stretch in which they also play Chungnam Asan, Seoul E-Land and FC Anyang taking them into the month of October.  They have an opportunity now to re-establish the momentum which made them one of the hottest teams in K League 2 in the month of August.  Baek Sung-dong and his eight goals have had a lot to do with the team's recent success.

Another player who has featured prominently for them since seeing his first action with the side in early July is right back Choi Jun.  The 21 year old has made ten starts for the club thus far, with nine of those seeing him play maximum minutes.  He wasn't getting a chance earlier in the season at his parent club Ulsan Hyundai under Kim Do-hoon, so the loan deal has worked out well for all involved, especially the player himself.  Should he manage to stay healthy, he will be a key man for them down the final stretch. 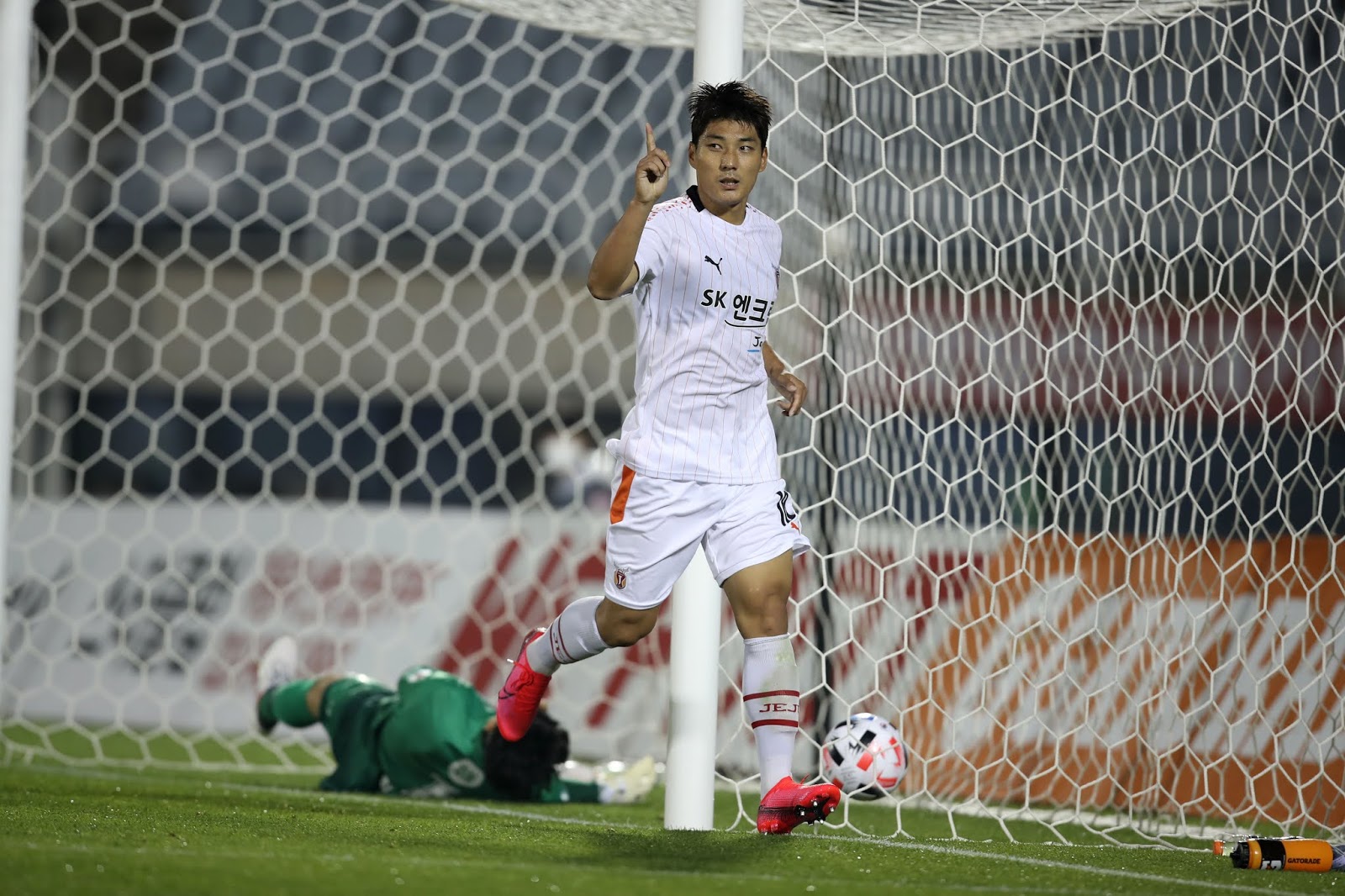 A man reborn of late with three goals and one assist in his past three matches.  The opponent this weekend is Bucheon FC 1995, a team he has already scored against this season.  In fact, his injury time winner in their first meeting back in May set the Islanders on a seven match unbeaten run before they lost for a second time to Daejeon Hana Citizen at the end of July.

He was brought to the island to score goals, and thanks to recent performances, now finds himself back in the good graces of Nam Ki-il once more.  His seven goals overall are good for sixth in the current scoring table, but his output of late is what really should have observers around the league taking notice.  The title could be all but decided in the next month, so the fact that he is hitting his stride at this point in the season is an indicator that the team as a whole is firing on all cylinders at just the right time. 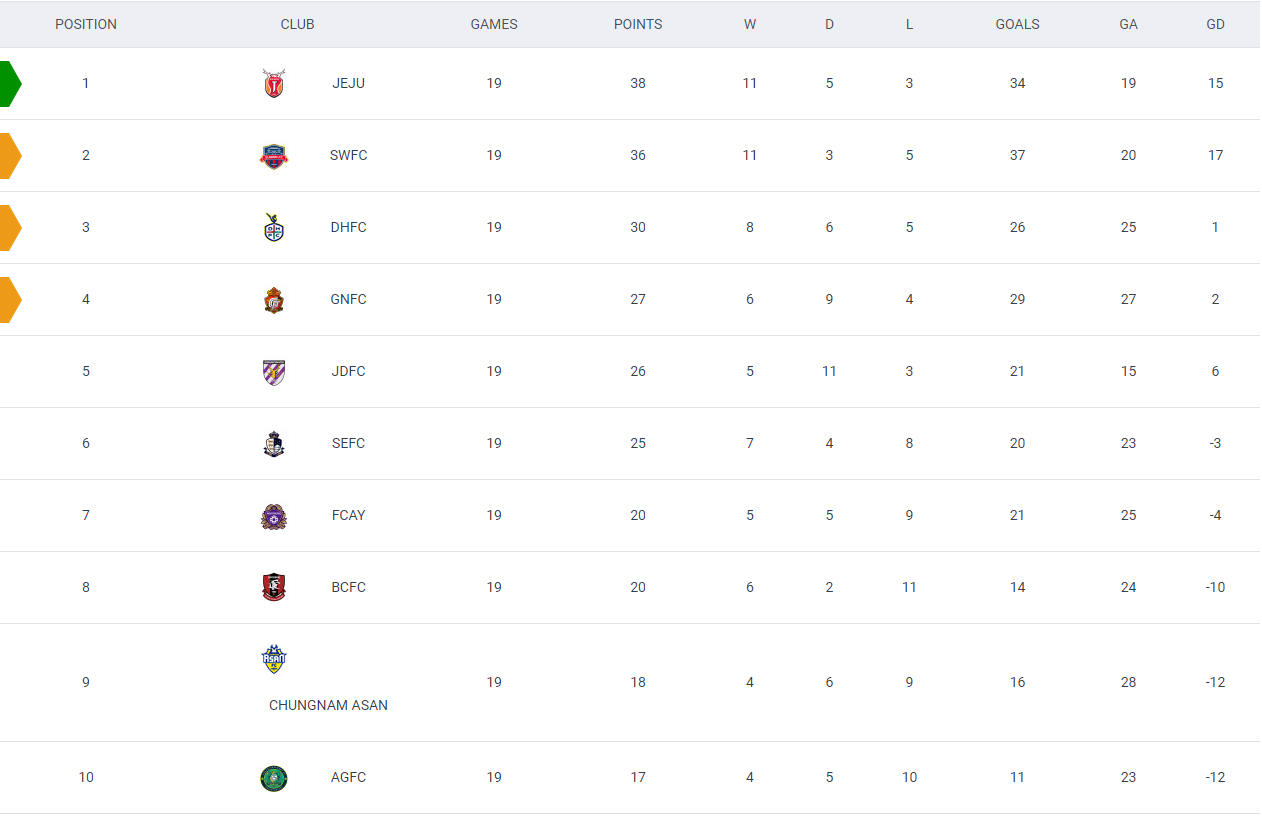