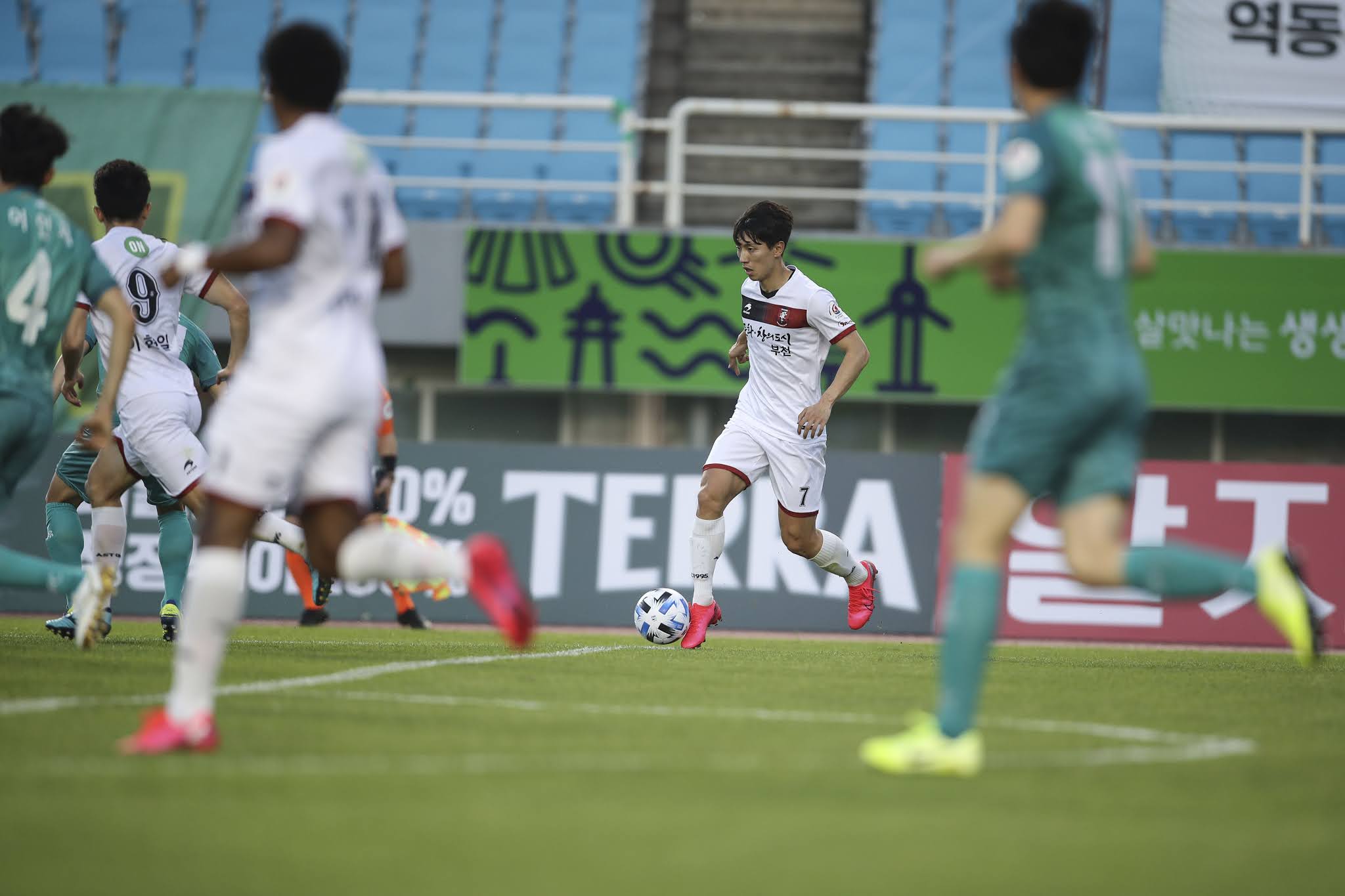 With two matches postponed, the final round of fixtures in Hana 1Q K League 2 is split into two. This weekend champions Jeju United are away to Chungnam Asan looking to extend their impress unbeaten run to 16 while Bucheon FC 1995 are at the Wa~ Stadium Ansan to take on a Green Wolves side which is fighting tooth and nail to avoid the K League 2 wooden spoon. Elsewhere, runners up and playoff finalists Suwon FC are away to FC Anyang. 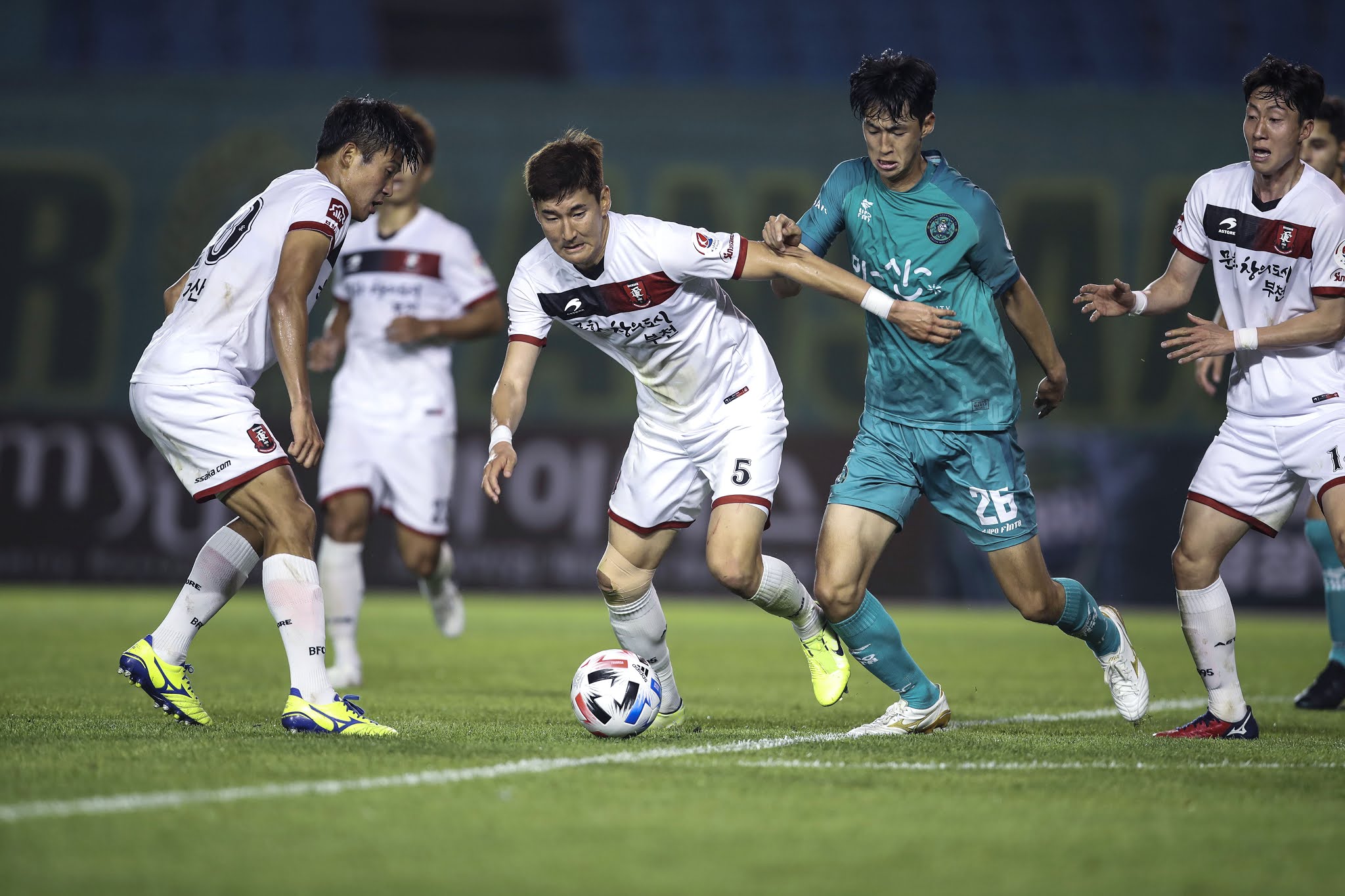 Two teams battling it out to end the season on a high meet at the Wa~ Stadium on Saturday when Ansan Greeners face Gyeonggi Province neighbours Bucheon FC 1995. Wind back to 2019 and Bucheon were in the midst of their unbeaten run to sneak into the playoffs, eventually displacing the Green Wolves who narrowly missed out. Heading into this Saturday's match both teams have identical form records of one win in five with two draws and two defeats each.
Bucheon, despite sitting in seventh place, have managed to rack up the second most passes in K League 2 this year, only Gyeongnam have made more. Bucheon can also boast of having the best ratio of passes per minute of possession with 14.5. Ansan Greeners, meanwhile, will be doing their utmost to avoid finishing bottom of the league. The Green Wolves are three points ahead of Chungnam Asan, but have scored four goals fewer. A win for the Owls over champions Jeju United could see Kim Gil-sik's Greeners side slip to the bottom of the table. Ansan, though, have the best defensive duals win percentage in K League 2 with 59.16%. 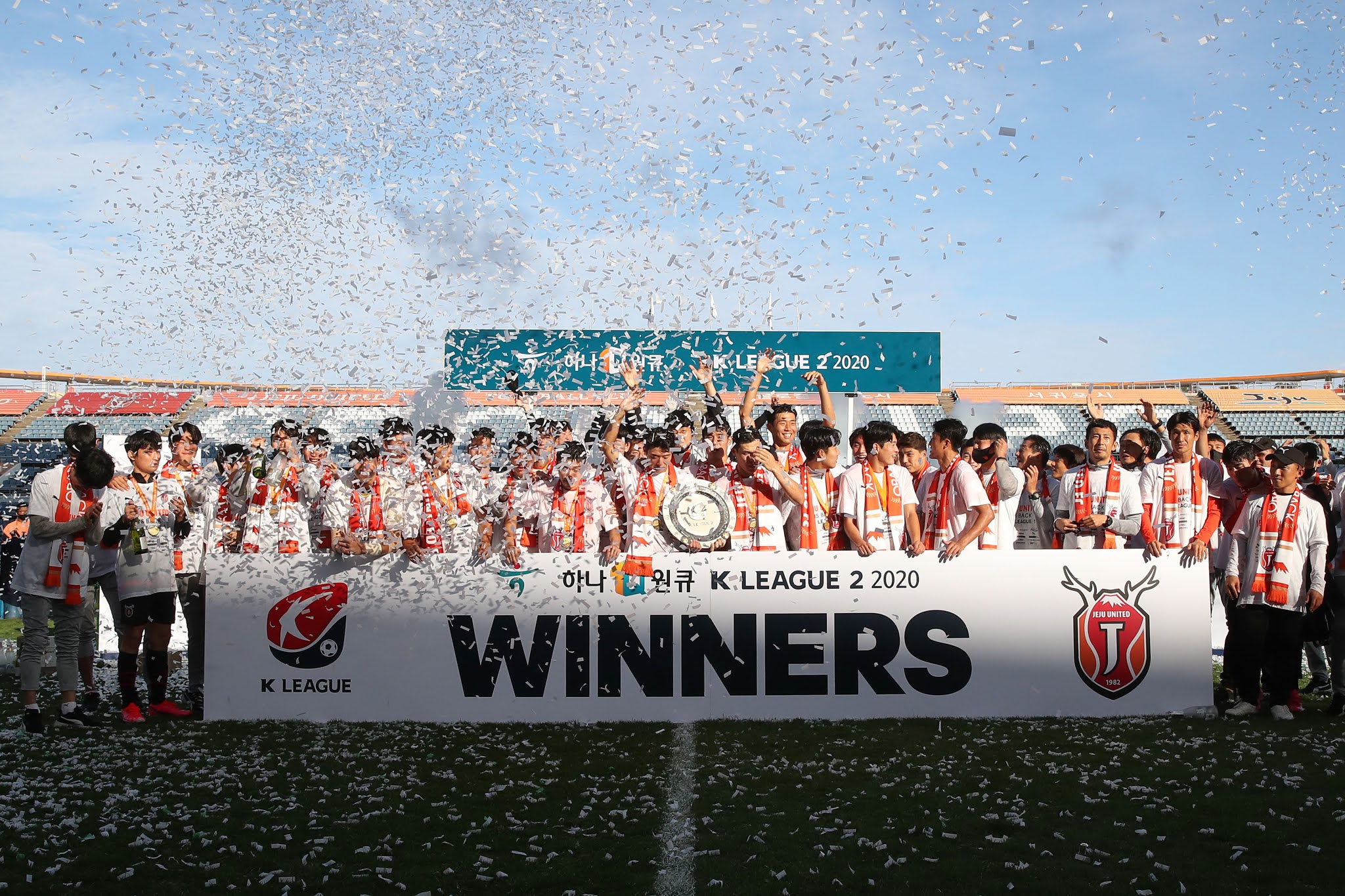 With one match to spare, Jeju United were crowned as 2020 Hana 1Q K League 2 champions. Nam Ki-il's men now have the chance to cap off the season having gone 16 matches unbeaten when the Tangerines take on basement side Chungnam Asan this weekend. Jeju have proved to be worthy champions having scored 49 goals, the second most in the division, and can also boast of having the steeliest defence having shipped just 23. Jeju travel to Asan this Saturday to take on Park Dong-hyuk's Chungnam side who are searching for a first win in five. From the two previous meetings this term, Jeju emerged as victors on both occasions winning 2-0 on the island in August and at Yi Sun-sin Stadium in June. With the title sewn up, Coach Nam may opt to rotate things but whoever is selected to wear the tangerine shirt will want to cap the season off in style.
[READ: Jeju United win Hana 1Q K League 2] 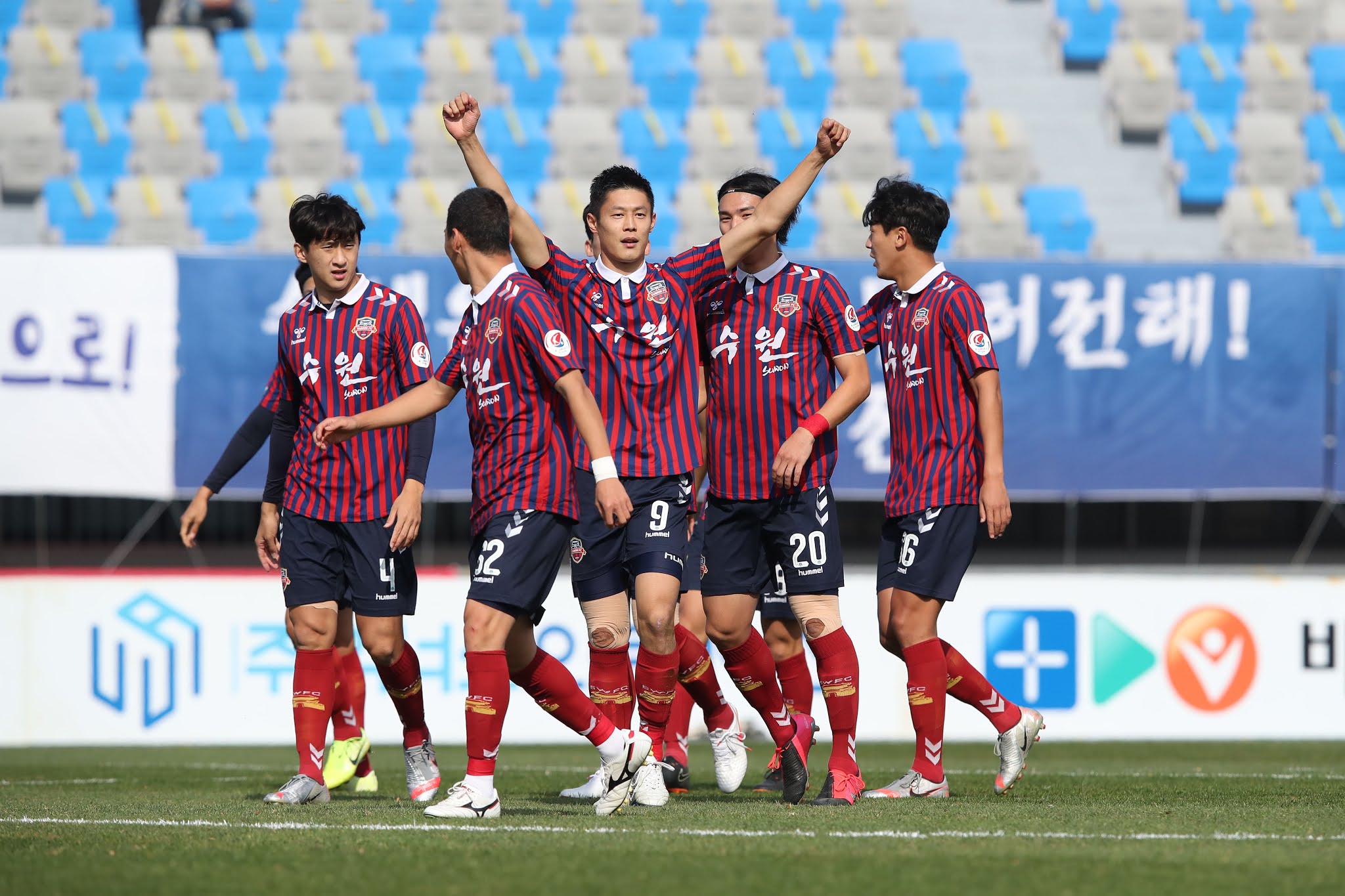 Suwon FC head into the final match of the season knowing that second place is secured, as is a place in the Promotion Playoff Final. With a couple of weeks between Saturday's last match of the campaign and the final itself, Kim Do-kyun's men will be looking to end on a high. Suwon ran out 2-1 winners last weekend, denting Gyeongnam FC's playoff hopes whilst and scoring both goals is MVP nominee An Byong-jun. An is on 20 goals for the season and also leads K League 2 in terms of shots made, shots made per 90 minutes and has made the most headed shots with 29. The North Korean has scored 40% of Suwon's goals this year and will be hugely important heading into the playoffs. Suwon face Anyang this weekend, a team which An Byong-jun has scored against already this season. 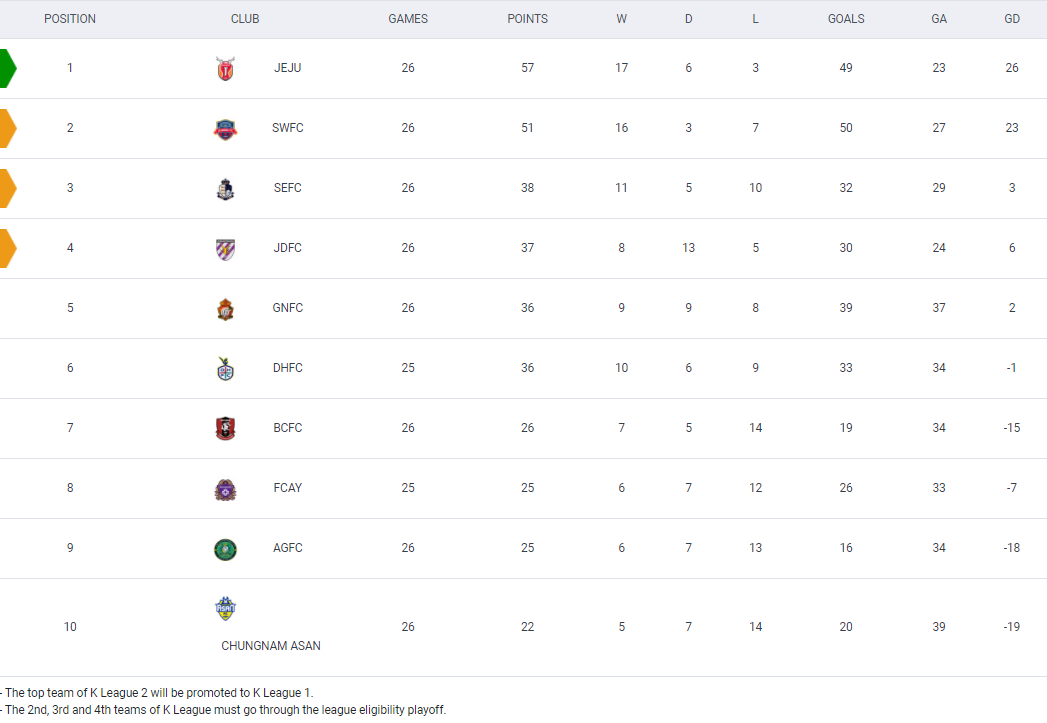 Gyeongnam FC vs Daejeon Hana Citizen, and Seoul E-Land vs Jeonnam Dragons have been postponed until Sunday 21st November