What K League Means To Me: Connor Chapman 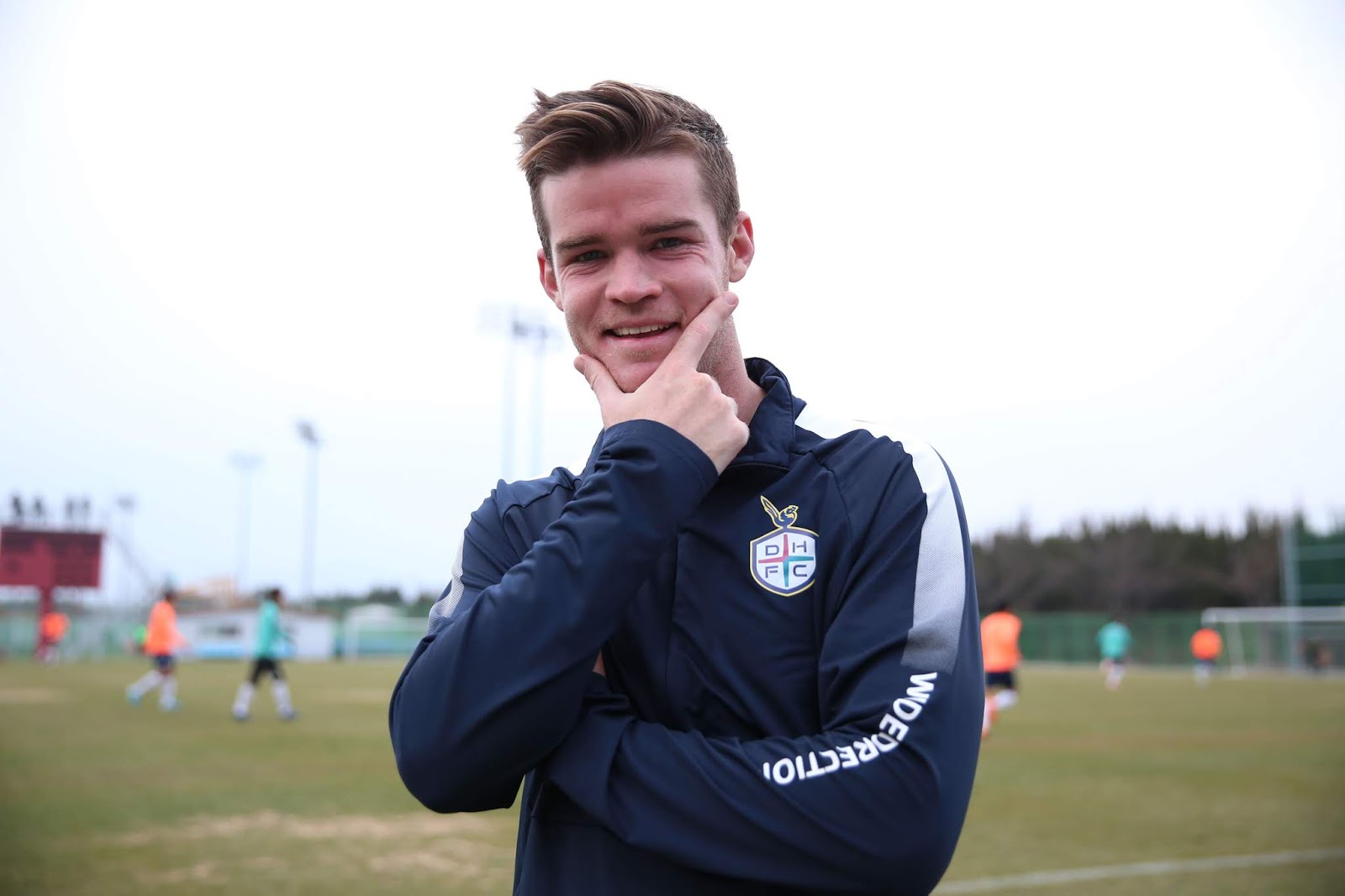 Foreign players come and go, a lot of those who do stay seem to fall in love with K League and Korea and stay here for a long time. Daejeon Hana Citizen's first marquee signing since the Hana Financial Group takeover was Australian defensive midfielder, Connor Chapman, could be the latest foreign star to stay on these shores long term. The former Incheon United and Pohang Steelers man returns to Korea after a one-year absence, and speaking exclusively to Paul Neat, as part of a regular series of interviews with foreign stars who have really taken to life in Korea, Chapman reveals how happy he is to be back.

Welcome back to K League and to Korea, I don't think it's too much of a surprise to see you back, it is no secret that you didn't want to leave Pohang, but I think it is a surprise that you have joined a K League 2 team.

Obviously, with Hana [Financial Group] taking over and the project that they have here, I think they have high expectations, I think they expect to get back to K League 1 in one year. For me, that was my goal as well when I came here. You see the players that they have signed, big signings in terms of Korean players, good foreign signings so I think it was exciting. Obviously, I would have loved to have come back to K League 1 but the lower teams in K League 1 and K League 2 are probably similar so I think to come and, hopefully, have some success, and get promotion that's the aim and it excited me and hopefully, within one year we can do it.

Was it a move that you were trying to make happen, or did it come out of the blue?

There were a few clubs in Korea interested, obviously because I had been here before. As I said, this one was probably the most exciting. Me and my wife love living in Korea, my football style suits the Korean football style. I feel that Daejeon with Hana Bank, what we are being told, is that they are going to invest a lot into the club. They already have, we have got a great coach [Hwang Sun-hong], the president [Huh Jung-moo)] has been great so far, I know that they have started to add more things to the club, and I think if Daejeon gets to K League 1 they will probably be one of the biggest clubs in Korea. I think that the most exciting part is if we get promotion that they will really invest in the club, invest in it even more. With investment you are most likely to have success and I think it can be one of those clubs that can be top two, top three, top four (in K League 1), that can fight with the Jeonbuks and Ulsans and clubs like that.

What is it about K League and South Korea that you like so much?

I think, obviously the people, the food, it's a beautiful country, it's safe, the football. The football is a different level to the A-League, I think. At the top end, it is probably a little bit better technically. It's obviously different, so you saw Jeonbuk went to Sydney [AFC Champions League], and they drew 2-2 so I think it's different styles. It's hard to say which one is better or not but the way they play football [in Korea], they're very technical. So, as a player, to have technical players around you it makes it easier for you. And even if you miss a pass by a metre they're still technically able to take care of it. So, for me, as a player, it helps my game knowing that there are technical players around you and it makes you a better player as well.

Some foreign players come and go, some come here and end up staying a long time. Dejan, Osmar, Cesinha for example, someone who you mentioned earlier, do you see yourself staying here long term?

Daejeon haven't had the best of times in recent years, finishing bottom of K League 1 and K League 2 within just a few seasons so the takeover came at a time when the club needed a lift. I am sure the fans are frustrated that the season hasn't got going yet, but it must be the same for the players too?

For sure, we haven't lost a game in pre-season yet. We versed Incheon, Gangwon some K3 teams so we have had some really good results. The team is doing well, I think. André Luis and Bruno Baio, who has obviously been here before (Jeonnam), have settled in really well. I think André Luis is going to be a very exciting player, not only as a K League 2 player but I think his quality is K League 1. If he was in K League 1, I reckon he would be one of the best in the league, up there fighting with Césinha and players like that. 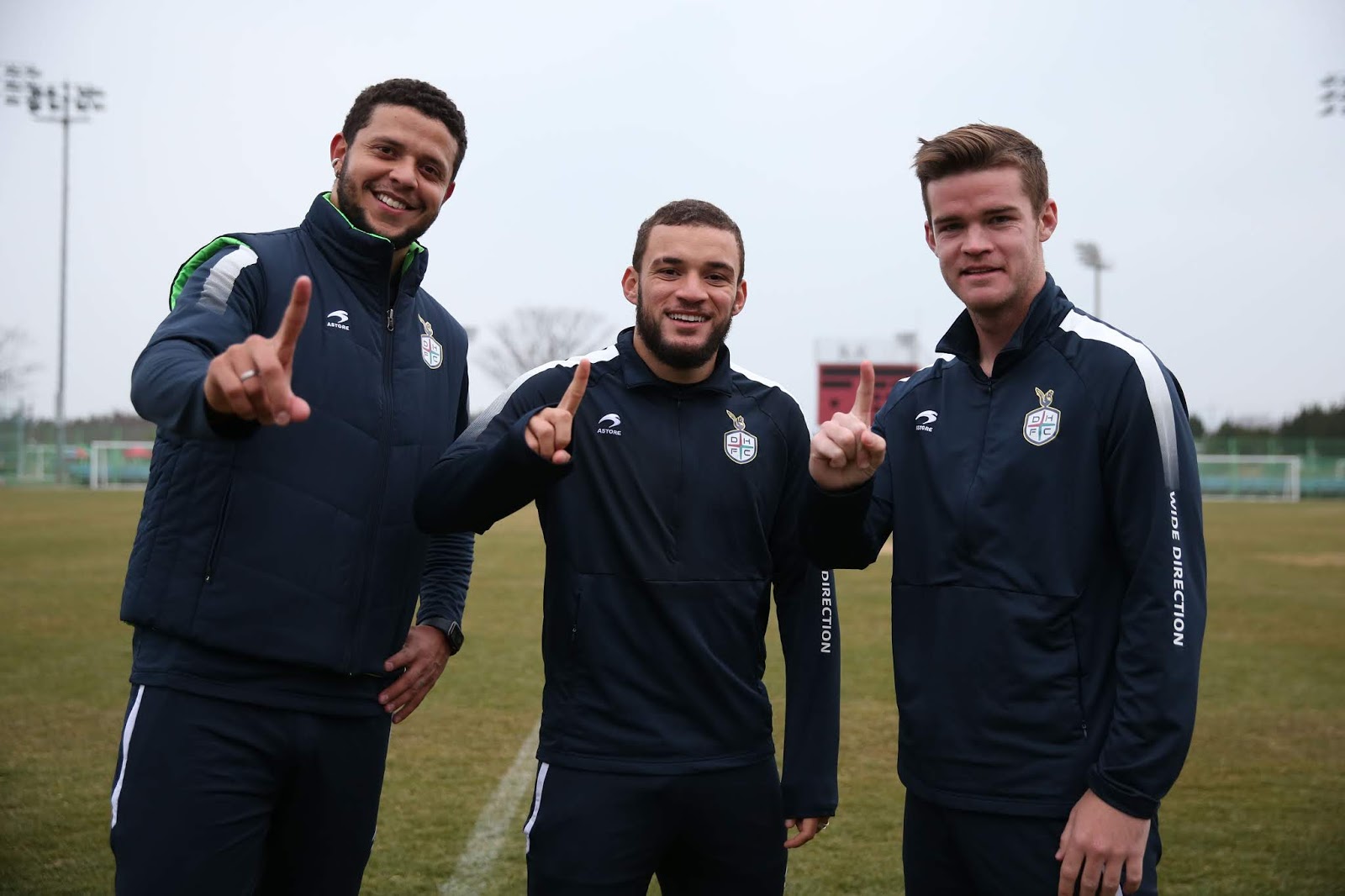 I think the signings we have had are very exciting, we have got some experienced players like [Cho] Jae-cheol from Gyeongnam FC, [Kim] Dong-jun the goalkeeper who is one of the best in Korea so there's a good mix of players in our team and I am sure that Daejeon won't be happy with anything less than promotion this season.

It's a difficult league to get out of as well with just one team winning automatic promotion so it's going to be a fight between the likes of Jeju, Gyeongnam, and Daejeon. It's going to be a really tough league.

For sure, Gyeongnam have kept a lot of their players, Jeju the same so they've got K League 1-quality players. They've invested in foreigners, they have a proven K League 1 goalscorer, so I think it is going to be a very difficult league but you've still got the playoff positions as well so you never know, teams like Anyang could up there as well. K League 2 is a difficult league, from what I have heard it's a different style than K League 1, a little bit more defensive some of the teams, a bit more direct. So, it'll be interesting to play in it and you've got three teams there (Daejeon, Jeju, Gyeongnam) that could play in K League 1 so I think it's going to be very exciting and hopefully, we are the team that gets to the top.

There's going to be a lot of interest in Daejeon, not just for the players who they have signed, but also because of the manager too. Hwang Sun-hong has won K League titles, what's it like to work with him?

I think, personally, it has been a great experience so far. We went to dinner with him the other day and people were asking for his autograph, he's a player that played in four World Cups, he has a lot of experience, and I think if anything the time off that he had, I think he has refined his coaching and for us foreigners, it has been one of the better clubs I have been at so far with how they have taken care of us. They are really trying to make sure that we feel comfortable. And, so far, we have had good pre-season results, I feel like we are going to try and play exciting football but try to win as well so for me it is exciting. 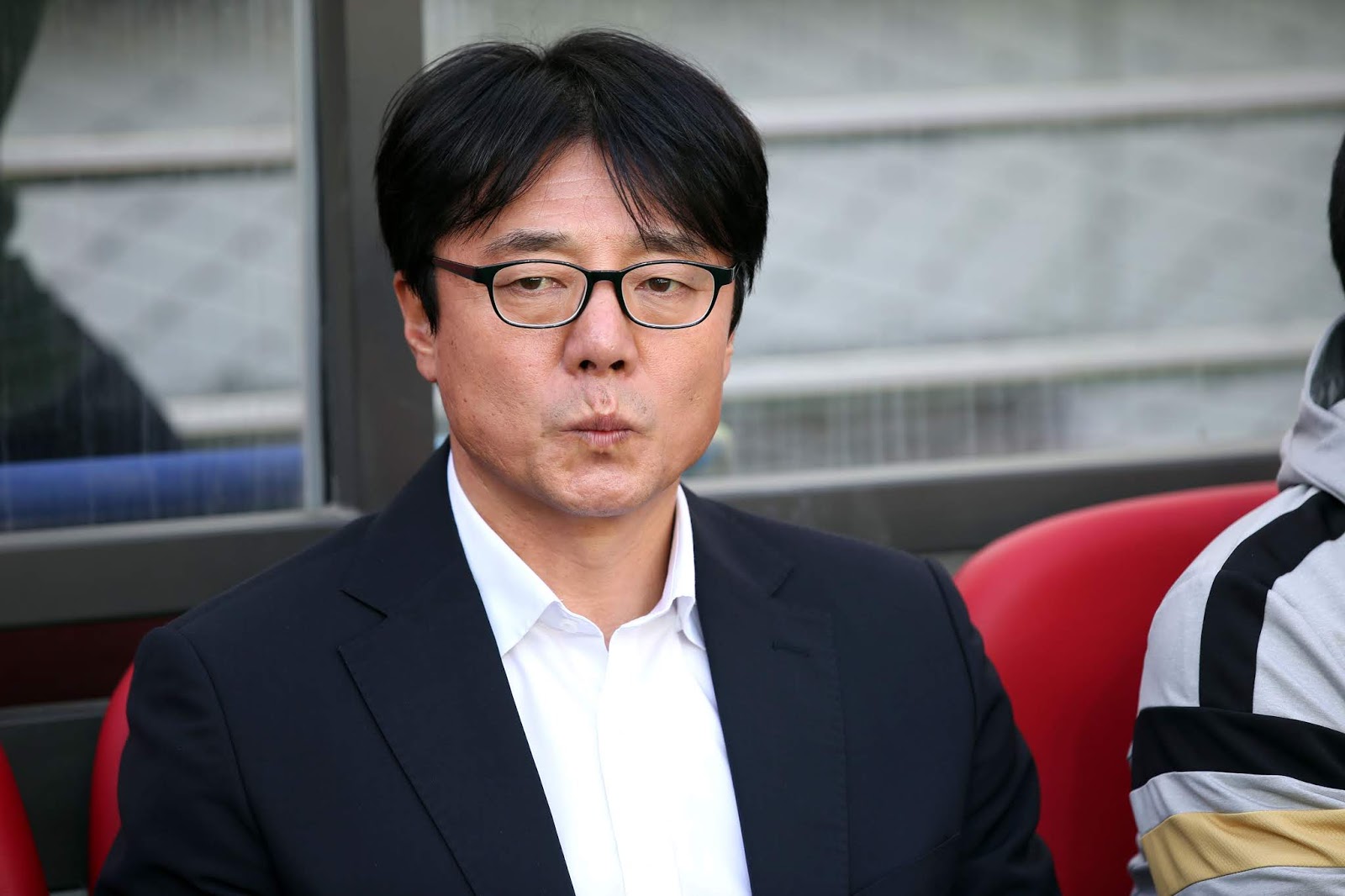 There's going to be a lot of intrigue surrounding Daejeon this season for many reasons but, Hwang Sun-hong being the manager will definitely be one of them.

Yeah, and we've got a president as well who is very experienced, he coached the Korean National Team, he's had some success in his coaching career as well so I think to have him as a bouncing board for ideas I think it's great. I think the people that they have brought in too, they've all got a lot of knowledge and have been in football for a long time. Everything is there to have success, now it's just up to us to do it.

You mentioned some pre-season friendlies, judging from reports it seems as though you are going to be deployed as a holding midfielder, is that the role which the club has signed you for specifically?

Yeah, so far that's how it's been going as a number six; screening and helping the defence out and that sort of stuff. But, you never know with injuries, I am always able and willing to go into centre back if I'm needed to be there. But, I think the main role, my job will be to play number six, yeah.

What are your thoughts on Daejeon's young centre back Lee Ji-sol?

I think for a national team player you have to step up and he's been to a World Cup (U20 FIFA World Cup, Poland) and got that experience of playing on a big stage so I think if he wants to be in the full Korean National Team, it's perfect that he's playing and getting a lot of first-team experience now. 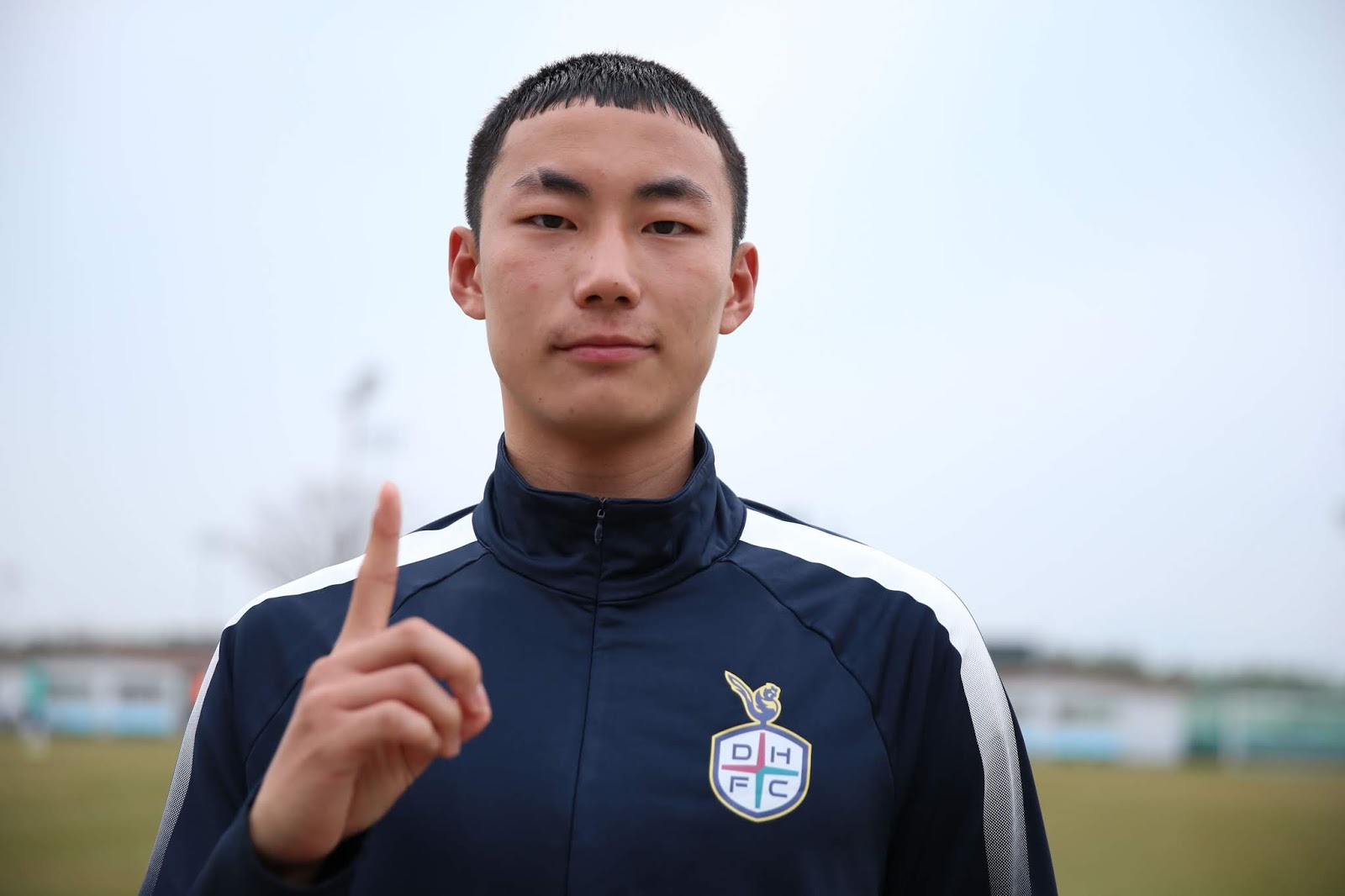 He plays with a European style, he's very comfortable on the ball, he likes to play out from the back. In the next few years it will be for him to get stronger and all those sorts of things because, for sure, I could see him playing in Europe. The next stage for him would be to play a lot of games, have success here and then either go to a bigger team or get promotion with Daejeon or aim to get into the National Team.

How about any other young players at the club?

Kim Se-yun, he's a midfielder/winger also from the Korean National Youth Team. The difficulty is playing against players your age and then going up and versing men, a lot of it is about strength. But, as a player, I am sure that he will refine and change the way he plays and I think he's a great player, you can tell that he's a smart player. If you can adapt your game, the quality that he has as a technical player he will be able to get around men's football.

What can we expect from Daejeon tactically or formation-wise?