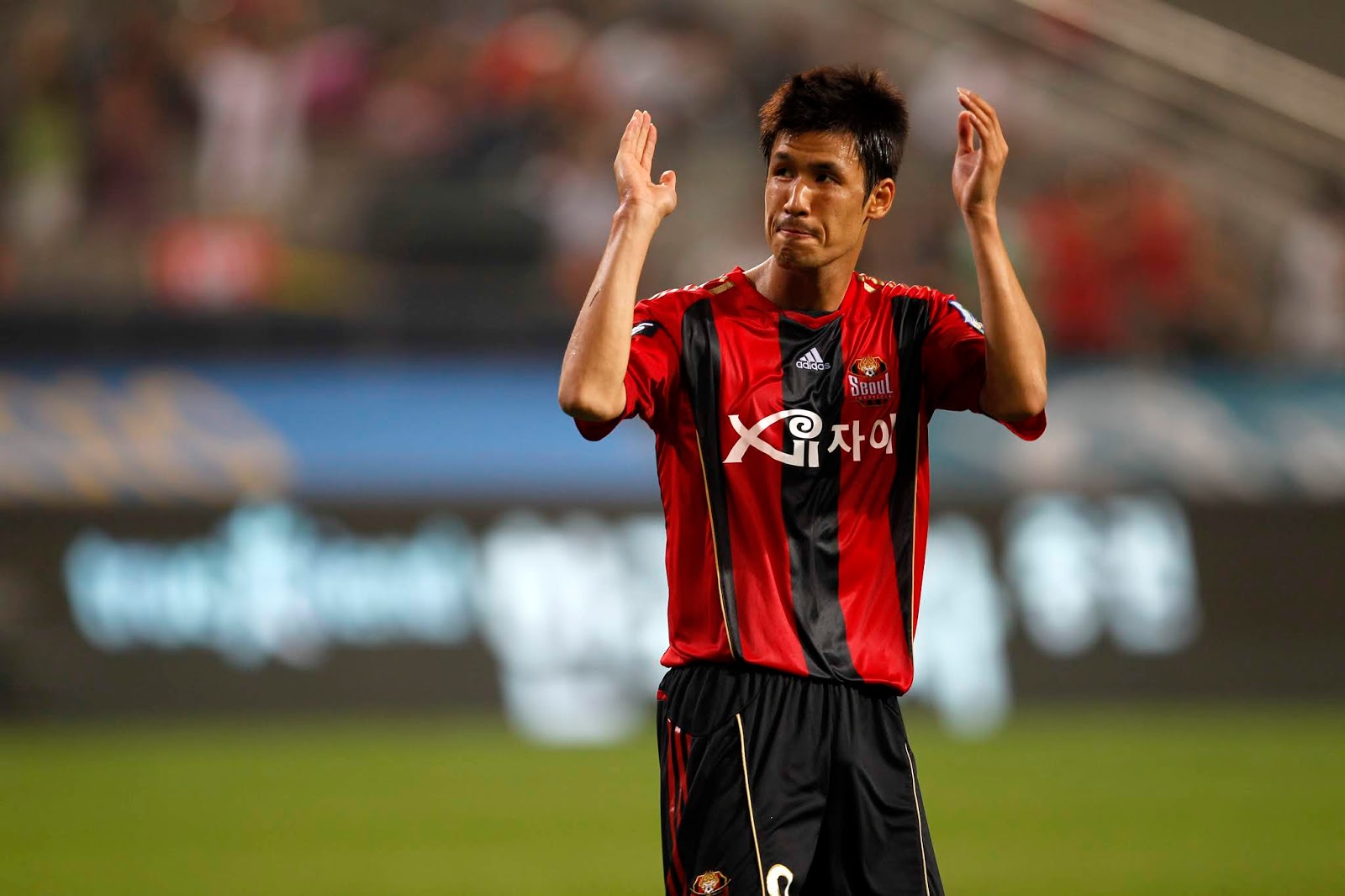 What was it like breaking through into the first team at Anyang Cheetahs and then going on to win Rookie of the Year in 2003? Did you feel pressure afterwards?

First of all, at that time the manager Cho Kwang-rae was very considerate of me. I think he gave me chances to play in the first team based on my potential. There were lots of good players in the team at that time who gave me a lot of help and I trained as much as I could to be as good a player as I could be. The outcome of that was the Young Player of the Year Award and for that I am very thankful. After that, though, I didn't feel any pressure because of it. But I felt like I had a certain level of responsibility to perform as best as I could for the fans who had shown me a lot of support.

Despite scoring in the K League Final against Suwon Bluewings with FC Seoul, the team was unable to win the 2008 K League Championship. How did you pick yourself up after that?

That was the most disappointing day in my football career. Even now I can't forget it. The team had good flow and we were performing well. The players had good chemistry so it was a great opportunity for us to win the title but unfortunately we missed it and it is more of a disappointment than can be imagined. But, with the disappointment of losing in the final, we worked even harder and went on to win the title in 2010. It hurt but I see it as a good memory in that regard.

Two years later you were on the winning team and scored in the second leg against Jeju, at long last you lifted the trophy. How did that feel?

I was so pleased. Personally, it was an opportunity for me to grow one step further as a player. At that time, Jeju had a lot of pace and had good players like Koo Ja-cheol so it wasn't easy. But, as a team we felt confident and so we were able to overcome them. In football, mentality is important. There are a lot of players who don't get to experience what it's like to lift a trophy. Even now it still makes me happy.

It was a double crown that year too with the League Cup, was that your favourite season in K League?

It was. That was the most memorable year for me. The double crown was not easy, though. Also, my son was born that year and I felt that, as a player, I had become a man so it was a time where life changed a lot for me. It was the best moment in my life, for sure.

Was it an easy decision to leave for Europe? Did you have aspirations of doing so or did the move come out of the blue?

My dream was to play in Europe. There were other opportunities but the timing or the conditions weren't right but then everything seemed to fall into place. Although I went to Europe at a slightly older age, it was my dream so I had to go. I prepared as best I could and I didn't give up; I take great pride knowing that my dream became a reality.

How would you assess the 2012 title, you joined midway through the season but helped the team win the title again. How did this one feel compared to 2010 with it being a regular season and no playoffs?

I came back to Korea to fulfill my military service and after being discharged re-joined FC Seoul again. At that time, Seoul were playing well and so, for me personally, I had to work even harder to get into the team. We won the title and I scored the last goal which was a huge honour and is a great memory. There are a lot of differences between a regular league and a playoff system. For me, winning the league outright is more meaningful and so I am really happy I was able to achieve it. As a spectacle, the playoff system is exciting but to be the best team throughout the whole year and win the title was very satisfying. 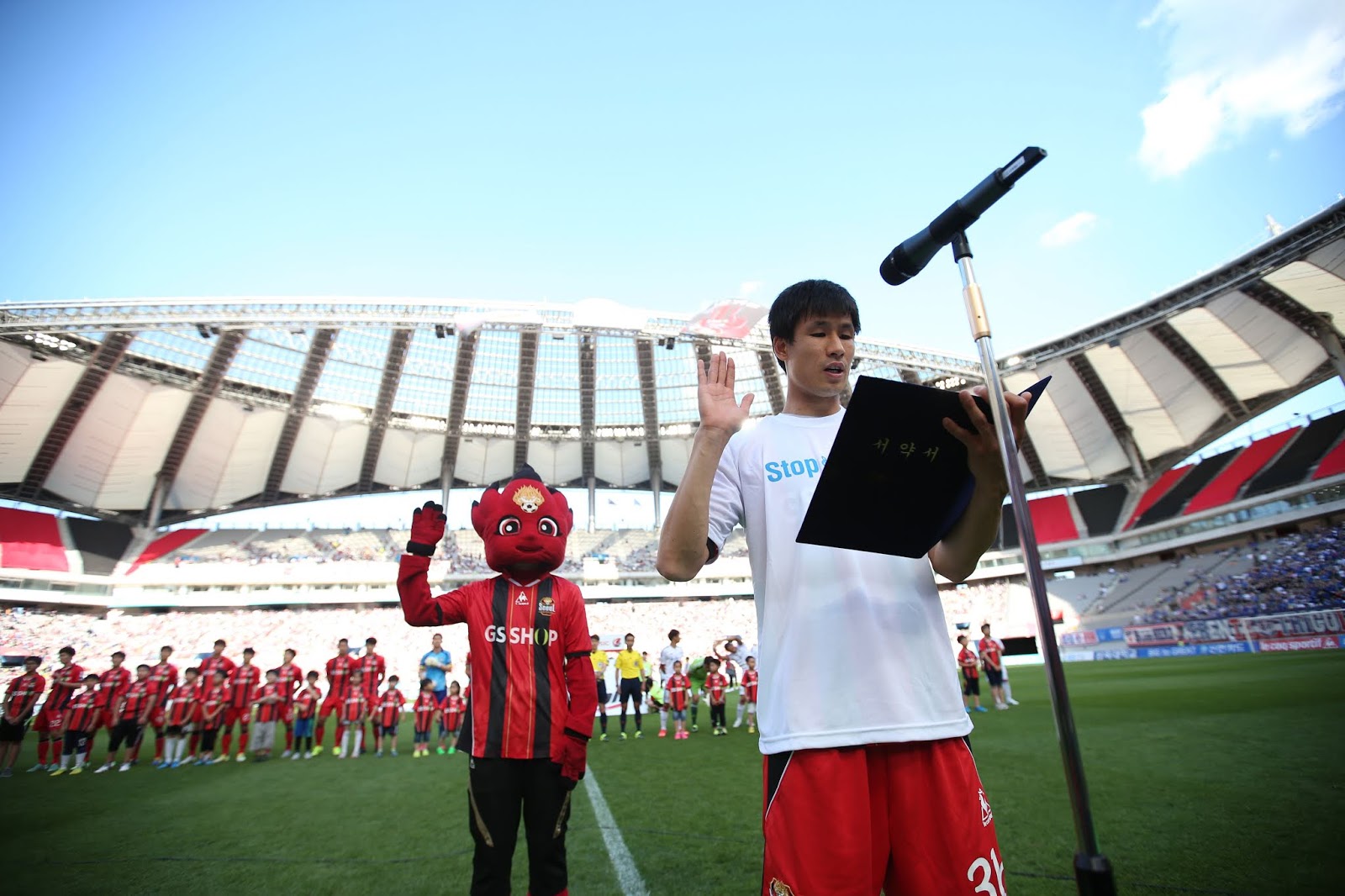 Was it a difficult decision to leave FC Seoul in 2015?

Even if I went back now it would still be a difficult decision and was the most difficult decision I made throughout my professional career. But, to get more playing opportunities and to feel a little bit more valued I made up my mind to leave. There was a certain pressure, a weight on my shoulders, because if there was a chance that it could prove to be the wrong decision then I would have to take responsibility. But, looking back, I don't think it was the wrong decision and was motivation to keep going. So, to Seoul and to Gwangju I am very grateful.

It proved to be a good decision, you won the 2016 MVP with Gwangju but why Gwangju? How did it feel being the MVP?

It was my first MVP award as a professional and it was possible because of all the people who supported me. The manager, Nam Ki-il showed a lot of faith in me. All the people at the club from that time too, I would like to express my thanks to them. 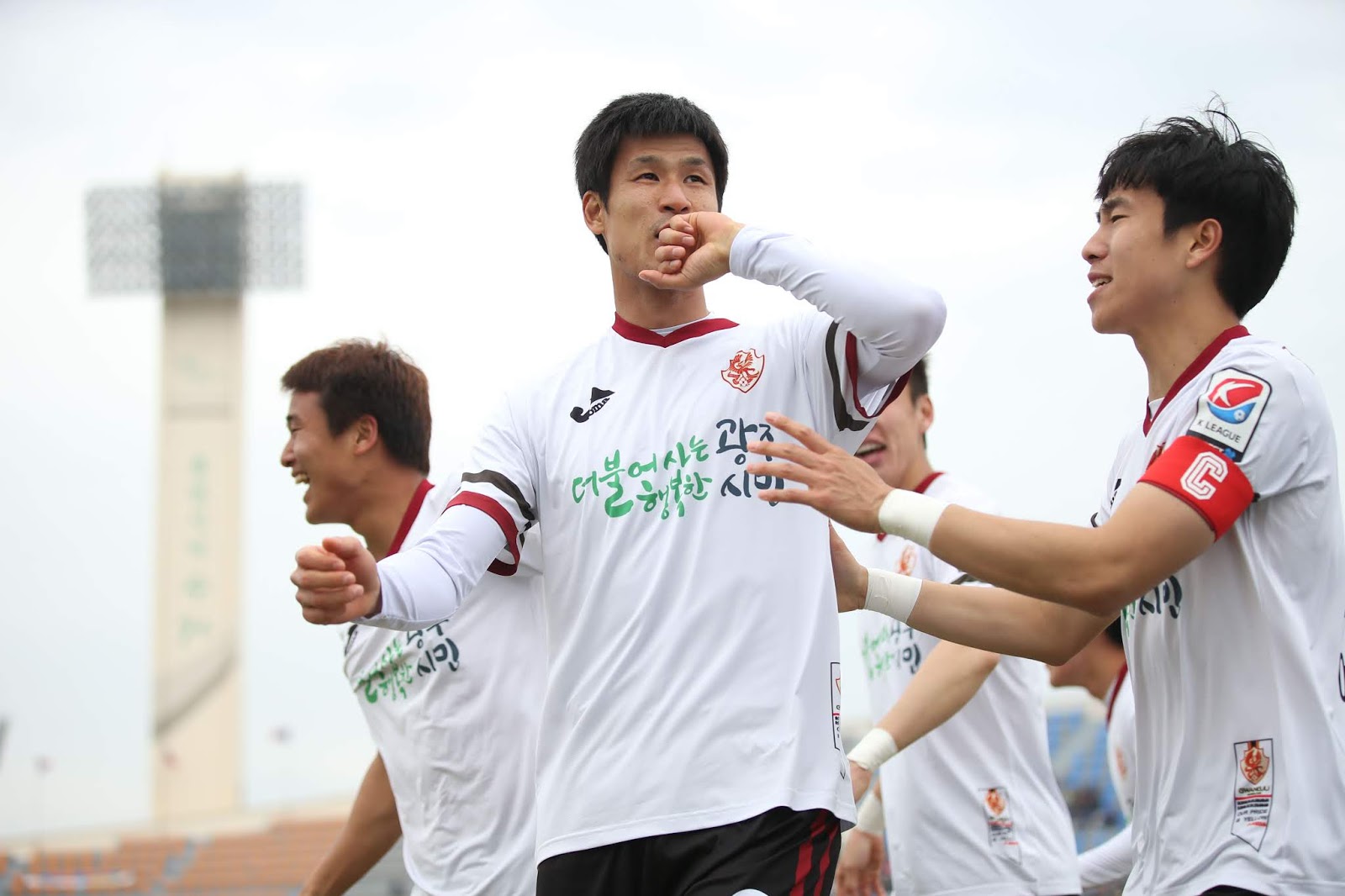 Gangwon next, and the Korean galacticos with a number of high-profile signings such as yourself, Han Kook-young etc. How would you assess your time at Gangwon?

I enjoyed my football during my three years at Gangwon. But I felt as though I wasn't able to perform as well as what was perhaps expected of me to due to injuries which is a shame, and for that I am sorry. Nevertheless, I cannot forget that period in my career because of the Gangwon officials and all fans who supported me.

As an experienced striker with an exemplary goal-scoring record it was a surprise to see you move to K League 2 with Jeju United. What attracted you to the club? I am sure there would have been offers...

I thought about it a lot. But where I play isn't important, more so how I can help the team and so that's why I chose Jeju. The club appointed Nam Ki-il, a manger I have a lot of respect for, he is someone who has faith in me and so it wasn't a difficult decision in the end. I want to achieve promotion with this team, hopefully we can do that. I am excited for this next chapter in my football career.

What are your own personal targets this season? What is your role expected to be?

I don't have any personal objectives this season. I just want to do everything I can to help the club achieve promotion. As one of the experienced players in the squad, I know what I have to do to try and help unite the players. I want to lead by example off the field too and do my best to help the young players, share my experience and show that we must never give up. If you do that then you can achieve your goals. 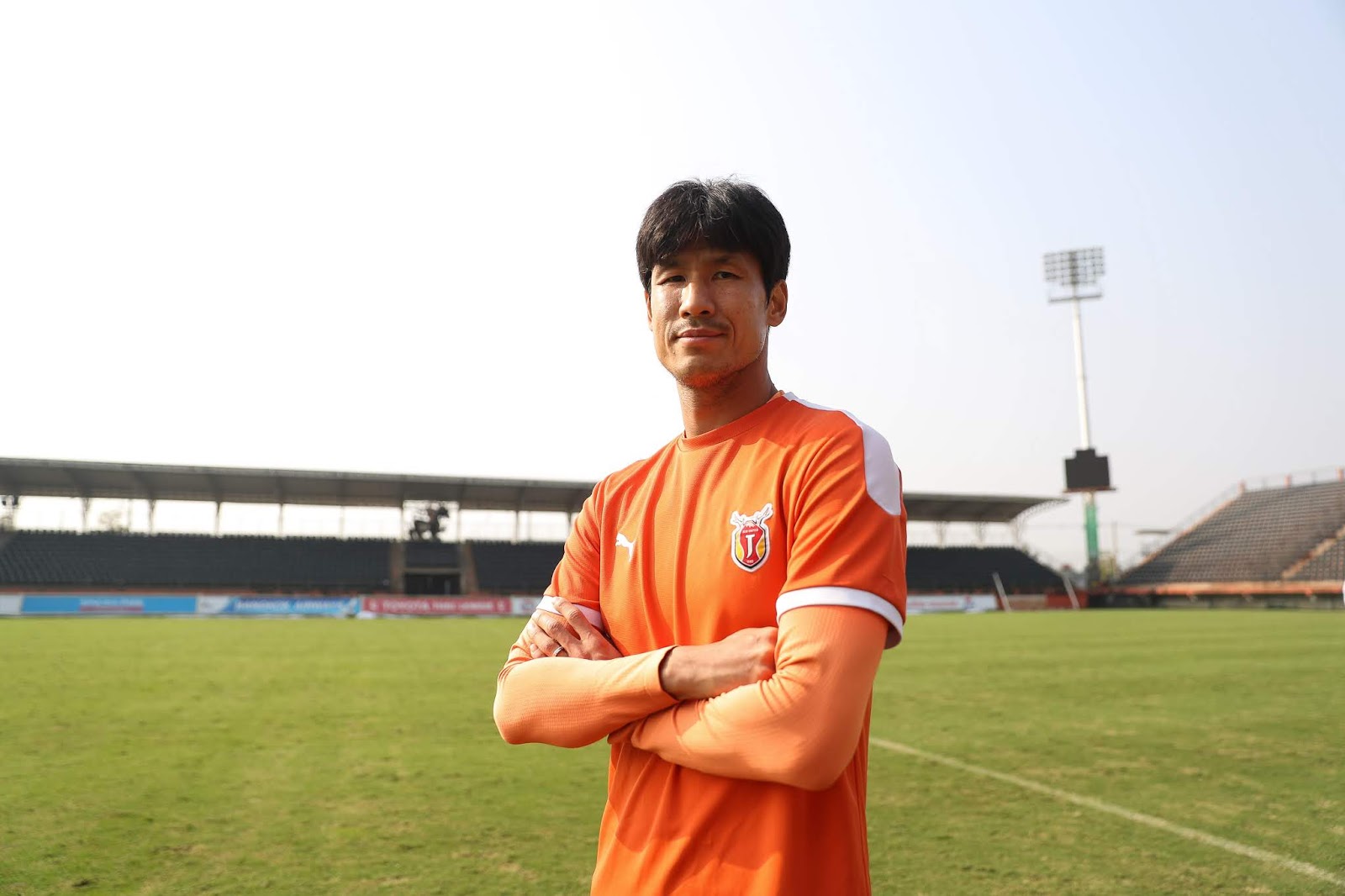 Have you thought about what you would like to do after you retire? Coaching?

The reality is that I don't have a great deal of time left as a player. But, as long as I am a professional footballer than I will give it my all when I am out on the pitch. I haven't given what I will do after retirement much thought but I aim to do something that I am good at and something which I enjoy.

You have had a great career, if you could press a magic button that takes you back to the very beginning and you could relive it exactly the way it was, would you?

I would definitely push that button. I still love football and my passion is getting stronger. But if I was able to go back then I would work even harder to become a player who had an even greater influence. So, for that reason, I would press the button.