After bouncing back from East Coast Derby disappointment with a comprehensive win over Sangju Sangmu in Round 6, Pohang Steelers welcome K League 1 leaders Jeonbuk Hyundai Motors to the Steel Yard in hope of causing an upset and staking their claim as legitimate challengers this season. K League United editor Matthew Binns previews this encounter.

Pohang Steelers travelled to Sanju last Saturday looking to get back to winning ways after losing to rivals Ulsan Hyundai the week prior. The match was an entertaining affair but it took just under forty minutes for the deadlock to eventually be broken. Pohang goalkeeper Kang Hyeon-mu cleared the ball up the pitch and into the path of Iljutcenko who then took it into the box and calmly finished to give the visitors the lead. However, it took just three minutes for Sangju to muster up an equaliser. Pohang's Kwon Wan-kyu failed to clear far enough and Moon Chang-jin's reactionary header from the edge of the box played through Oh Se-hoon who slotted away on his Sangju debut. Pohang did manage to retake the lead just before the interval, however. Manuel Palacios did well down the right to get the ball into the box to Iljutcenko, who then laid it off to the edge of the area for Paločević to convert.

The second-half started as quickly as the first ended, with Pohang furthering their lead in the 48th minute. A poor defensive clearance from Sangju was claimed in midfield by the visitors, with Choi Young-jun playing through Iljutenko to score his fifth of the season. Sangju looked to have brought themselves back into contention when Oh Se-hun converted a penalty in the 70th minute but Pohang were able to wrap up three points when Paločević scored his second of the game nine minutes later.

Jeonbuk lined up in their usual 4-1-4-1 formation with just two changes from their comprehensive 4-1 victory over FC Seoul the week prior. Choi Chul-soon was brought in at left-back while 19-year-old Lee Sung-yoon was handed his debut out on the left. The home side struggled to impose themselves for the majority of the match, perhaps also allowing the visitors some of their better scoring opportunities of the season. However, the backline remained resilient and the score remained goalless by the interval, despite some acrobatic heroics from substitute Murilo just before the half-time whistle.

The second half continued in a torrential downpour, noticeably having an effect on each side's playing style. Jeonbuk were able to eventually break the deadlock, however, after being awarded a penalty for a handball. Lee Dong-gook stepped up and confidently put away his fourth goal of the campaign. Jeonbuk were awarded another penalty later on for a similar offence but midfielder Kim Bo-kyung saw his shot saved by Jeong San. Both sides had shots towards the end but, thanks to some solid goalkeeping from both 'keepers, neither side were able to add to the scoreline. Not the most convincing of wins for the Champions, but they now motor on into midweek still atop of the division.

Over the course of history, these two sides have met each other on 83 occasions, with Jeonbuk leading Pohang by 32 to 30 wins. The last meeting at the Steel Yard back in August 2019 saw Jeonbuk walk away with all three points after goals from Ricardo Lopes and Han Seung-gyu secured a 2-1 win. The last time Pohang defeated Jeonbuk was a year earlier to that on 15th August, 2018, where they thrashed the champions 5-2 thanks to a Lee Sok-hyun hat-trick plus goals from future (and now past) Jeonbuk talent Lee Keun-ho and Kim Seung-dae.

Jeonbuk will be able to welcome back centre-back Hong Jeong-ho and manager José Morais to the fold after both were sidelined for the last two matches through suspensions picked up against Gangwon in Round 4. However, the Champions will be without striker and captain Lee Dong-gook who has been granted permission by the club to take his AFC A Level coaching badge.

Cho Kyu-sung could lead the attack given that Pohang loanee and defensive midfielder Lee Soo-bin cannot line up against his former side. Jeonbuk have two players called up to a Korea U19 training camp but because it isn't officially stated in National Team Operation Regulations nor planned ahead of time,  the U22 rule is still applicable.
Had Jeonbuk been exempt from this rule. Son Jun-ho, Lee Seung-gi and Kim Bo-kyung seemed prised to continue their roles in central midfield. It may also have meant Lars Veldijk being given the nod up front. Hong Jeong-ho could be reinstated to the defensive line alongside vice-captain Choi Bo-kyung in the centre, but given Kim Min-hyeok's effective showings in Hong's absence, it leaves the manager with a difficult decision to make.

Pohang Steelers will be without their captain and defensive midfielder Choi Young-jun as Choi was part of a loan-swap deal to bring the aforementioned Lee Soo-bin to Jeonbuk for a season and therefore cannot face his parent club. Kim Gi-dong should have the rest of his side available for selection though and looks set to line them up in his preferred 4-2-3-1 formation. 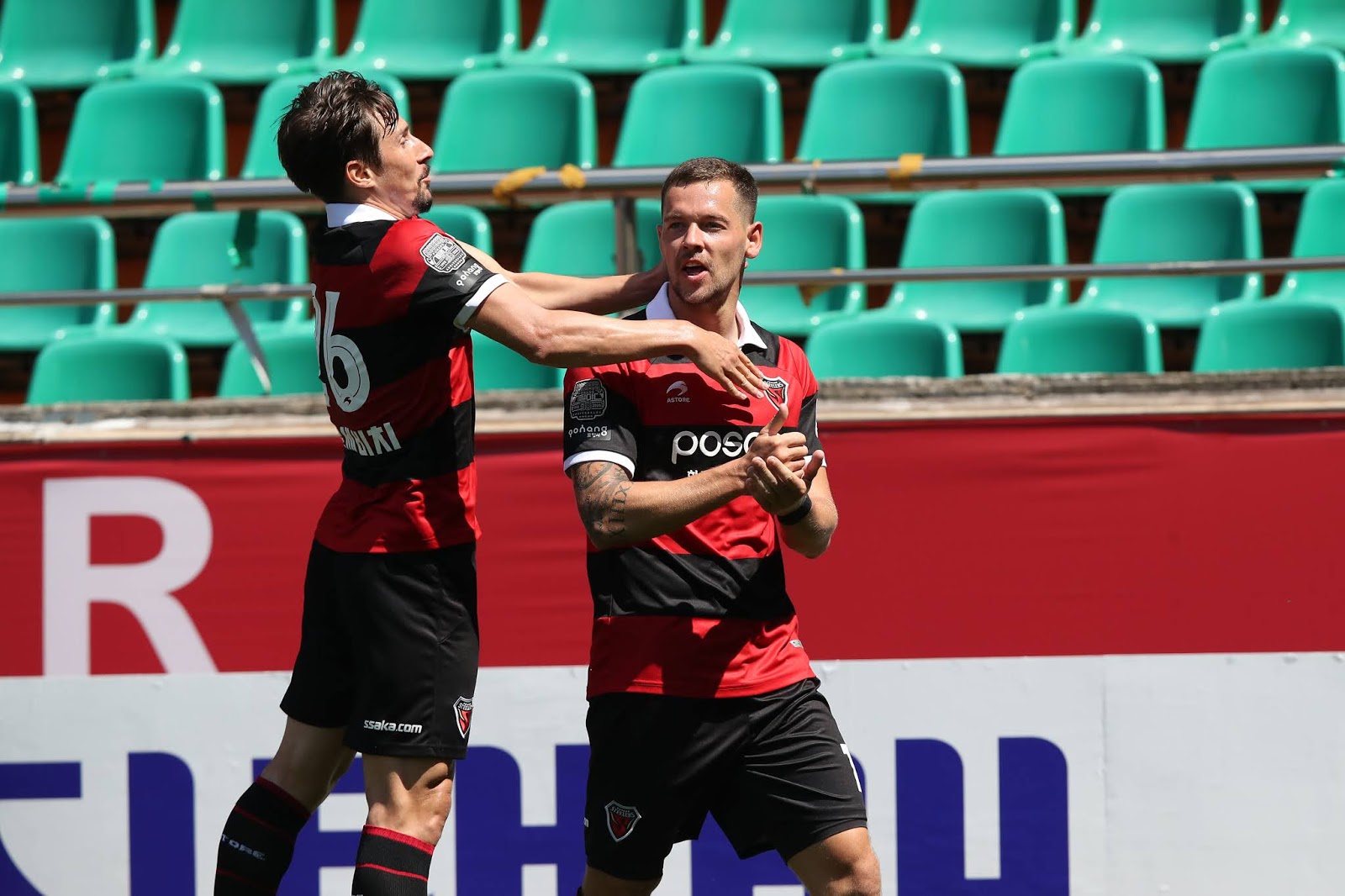 With Pohang boasting an attacking front four likely comprised of Stanislav Iljutcenko up top, followed by promising youngster Song Min-gyu on the left, Aleksandar Paločević in the centre and Manuel Palacios on the right, Jeonbuk's backline look set to be in for a far tougher test than that they faced against Incheon at the weekend.

Iljutcenko leads the clubs scoring charts after six games with five goals and two assists, building on his impressive nine goals in 18 appearances from last season. Furthermore, his partnership with another mid-summer signing from 2019, Paločević is continuing to bloom. The attacking midfielder also has four goals and two assists for this campaign

Song Min-gyu is perhaps another name Jeonbuk should be wary of. At 20 years old, Song is still a developing talent but is currently in his third professional season with the club and will be hoping he can build on the 20 starts earned last year. During his side's encounter with Sangju, Song and Paločević made the most passes between them and it will be a dynamic that the visitors will need to break up.

Finally, Manuel Palacios joined the side in the winter with many hoping he could replace the outbound Wanderson. The Colombian winger scored 11 times for FC Anyang in K League 2 last season and is now making the step up to the top flight. While he is still yet to open his account for the Steelers, he does still pose a threat and he may feel his first goal for his new team is only around the corner.

Pohang will likely be buoyed by their weekend victory whereas Jeonbuk may lament the fact that they were unable to win in a more convincing fashion. That said, Jeonbuk's defence is more resilient than that of Sangju's and should prove to be a test to the Steelers' attack. With their top scorer missing in Lee Dong-gook though, Jeonbuk may be concerned about their own forward line and will be hoping the rest of the side can step up in his absence to replace the threat he has continued to pose this season. This match may well prove to be a closely contested encounter.