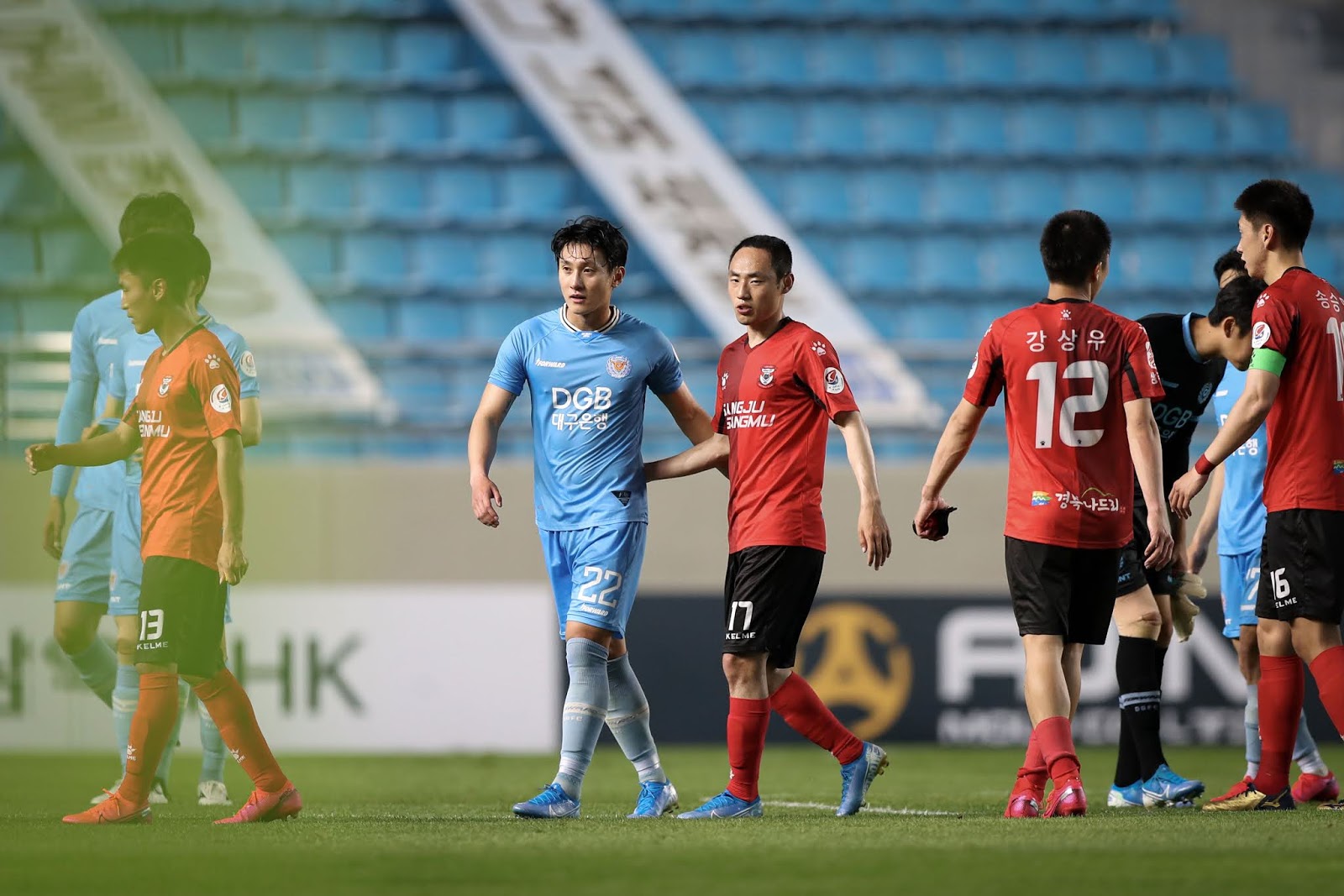 Halfway into the regular season before Final Round, Sangju Sangju are set to host Daegu FC this Saturday at Sangju Civic Stadium in Hana 1Q K League 1. Can the Soldiers extend their unbeaten run to six, or will the Sky Blues get back to winning ways? With two points separating third-placed Sangju and fifth-placed Daegu in the table, K League United's Daegu FC correspondent Muyeol Jung previews what can be expected from this clash in Round 12.

Sangju Sangmu exited the FA Cup in Round 4 after losing to Pohang Steelers 2-3 after extra time. The visitors Pohang went ahead when Stanislav Iljutcenko opened the scoring, but Jeong Jaehee equalised and got Sangju back on level terms at the break. In the second half, former Pohang man Heo Yongjoon scored his first goal for the military side on 58 minutes, but less than ten minutes later Pohang responded with Choi Youngjoon's effort from distance and made it 2-2.

With the scoreline 2-2 at full time, extra time followed and the game looked on course for a penalty shootout as extra time was running out. Then, on 120 minutes Pohang had a stroke of luck when the German striker Iljutcenko got Pohang's third through a deflection and sent the Steelers to the next round of the FA Cup.

Daegu FC bowed out of the FA Cup after falling to Seongnam FC 2-4 by a penalty shoot out. Daegu's caretaker boss Lee Byunggeun fielded his side with marginal rotation, showing desire to finish the game in regulation time, but later it turned out to be a disaster for the side. The first half was underway with the hosts' dominating possession, but there was little to enjoy until Daegu's maestro Cesinha put his side ahead right before the half time whistle. With a slightly precarious 1-0 lead for Daegu, Seongnam made their only chance count when defender Lee Changyong headed home from a corner on 76 minutes.

The game headed into the extra time after Dejan's curling effort cracked the post before the full time whistle. Despite renewed efforts in extra time, neither side were able to get close to scoring. Seongnam got through to the quarter-finals after the Magpies shot stopper Jeon Jonghyuk stopped Shin Changmoo and Kim Daewon's efforts in the penalty shoot out.

Sangju Sangmu are far behind the Sky Blues in head-to-head records with only three wins compared to Daegu's ten in a total of 22 meetings. However, the gaps between the two sides look relatively marginal in recent meetings as five of the last ten games ended in a draw, while Sangju and Daegu bagged two and three wins, respectively.

The first meeting of this season, played on Daegu turf, saw the points shared at full time after Cesinha's astonishing flicked goal with a back heel was cancelled out by a Sangju equaliser from Song Seungmin.

For the midweek FA Cup tie, manager Kim Taewan fielded his side entirely with the newly recruited players and back-ups who need game minutes, while their regulars the likes of Oh Sehun, Moon Seonmin, Moon Changjin, Park Yongwoo, and Kwon Kyungwon completely rested. Therefore, Sangju are expected to line up at their strongest capacity without any concerns of fatigue or suspension.

Ahead of the trip to Sangju, Daegu FC caretaker Lee Byunggeun will have to figure out the best way to line up his side following extra time against Seongnam. In the midweek FA Cup tie, players such as Cesinha, Kim Daewon, Jung Seungwon, Kim Sunmin, and Jeong Taewook played 120 minutes.

It will be good news for the gaffer if the injured Edgar da Silva (Achilles), Hwang Soonmin (unspecified), and Kim Wooseok (unspecified) can return in time, but they still remain doubtful.

What's the recipe behind Sangju's success?

Although Sangju Sangmu will be relegated to K League 2 at the end of this season regardless of their final position in the table, the military side are doing a superb job in the league, sitting third in the table. In their last five league games, they are unbeaten with four 1-0 victories and a 1-1 draw.

What are the reasons for their success? Is it just because of national team level talents in the squad such as Kwon Kyungwon, Moon Seonmin and Park Yongwoo? It could be. However, provided Sangju are the military side in which players constantly come in and out in the middle of the season, gaffer Kim Taewan should deserve more credit for their achievements.

The former Daejeon Citizen defender became the full time manager for Sangju in 2017 after 15 years work for the military side as a coach. Since then, the 1971-born manager always shows great humility and attributes the credit to his players in interviews, but his great work with Sangju is widely understood to be based on his managerial ability and high degree of understanding to the military entity and the football club through his long first-hand experience.

For this season ,when Sangju are confirmed to be relegated, Kim is steering the Soldiers well through continued encouragement for his players to improve themselves as footballers. Silverware with Sangju may not be easy, but regardless, Kim Taewan really deserves more credit.

Who will salvage Daegu FC?

It appears that back-to-back defeats have demoralised the Sky Blues, who had been running strongly until they knelt down to Ulsan 3-1 at home last weekend.

In their two recent defeats, Daegu looked unable to quickly move forward in build-up play which could be attributed to do with the absence of Edgar da Silva and Hwang Soonmin who are both out with injuries. Accordingly, the gaffer tried to make do with playing Cesinha upfront in place of Edgar, but the fellow Brazilian usually drops in and finds himself outside the box, resulting in Daegu being outnumbered near the goal mouth. In order to replace Hwang Soonmin, Shin Changmoo and Jang Sungwon were given a chance, but neither seem to have been able to nail down a regular place due lack of match fitness or being played in an unnatural position.

With such a short turnaround in scorching summer heat, fatigue will be a factor that decides the winner for this game. Sangju Sangmu rested their key players who come to the game very fresh and fit, while Daegu FC will have to go through the game with burnt out players. Daegu may find it difficult to handle Sangju's attacking assets like Moon Seonmin and Oh Sehun.