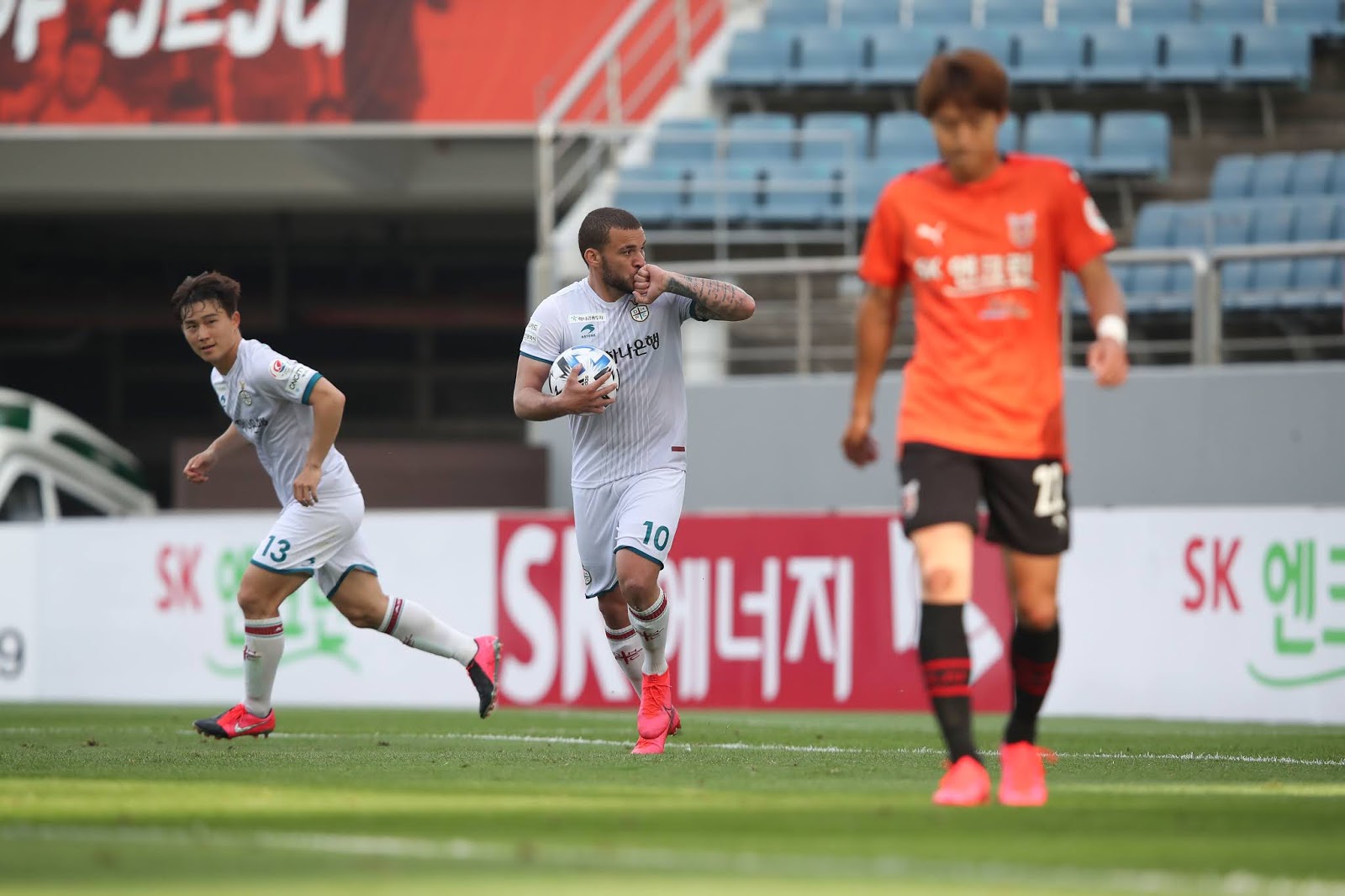 The pick of the action in Round 12 of the 2020 Hana 1Q K League 2 season is the third hosting second clash at Purple Arena as Daejeon Hana Citizen host Jeju Untied in a game which could have huge implications. Elsewhere, Suwon FC will look to preserve their lead at the top of the table away to FC Anyang while Jeonnam Dragons look to cement their place in the playoff places with a win over mid-table Gyeongnam FC.

The rest of the K League 2 promotion contenders will be hoping that FC Anyang can pick up a result when the Violets host league leaders Suwon FC on Saturday. Anyang's 2-0 away win over Chungnam Asan ended a win-less run of six matches, enough to move up to eighth in the table and just two points behind relative giants Gyeongnam FC. Suwon FC, meanwhile, only have a slender lead at the top of the table, sitting two points above Jeju United but four above Daejeon, the team they comfortably dispatched last weekend. Suwon picked up a 3-2 win when these two sides met at Castle Park earlier in the season. But, after being three goals to the good after 33 minutes, goals from Kim Kyeong-min and Yoo Yeon-seung for Anyang ensured of a nervy finish.

Seoul E-Land host newly-founded Chungnam Asan this Saturday while in the midst of some indifferent form. Last time out the Leopards succumbed to Jeju United after a 2-1 away win over Gyeongnam FC the week before. E-Land, though, sit sixth in the K League 2 table and just two points off the playoffs. A win over ninth-placed Asan could be enough to mount a push for for the top four the capital club. Chungnam, meanwhile, were unable to build on their mini revival as, after a 2-1 win over Gyeongnam which preceded a 1-1 draw away to Suwon FC, the Yellows fell 2-0 to Anyang at home last week. Park Dong-hyuk's side still only have one win this term. Seoul came out on top when the two sides met in May, Leandro firing in from the spot in the third minute. Seoul will be without striker Richard Sukuta-Pasu through suspension as well as Choi Jae-hoon. Asan will be without skipper Park Se-jik.

Bucheon FC 1995 were once riding high, sitting atop of the K League 2 summit after a solid start to the new campaign. However, the Reds have just one win in their last six outings in all competitions, including an FA Cup exit to K4 side Ulsan Citizen. Last time out Bucheon suffered a 2-0 loss away to Jeonnam but, back at home and against the team which is propping up the table, Song Sun-ho's men will fancy themselves. Ansan Greeners, meanwhile head into Saturday's encounter without a win in their last five with three defeats and two draws in all competitions. Such form has seen Kim Gil-sik's men drop to the foot of the table. However, a win against Bucheon could take the Green Wolves up to eighth place should results elsewhere go their way. Three points for the Reds, meanwhile, could just be enough to creep back into the playoff reckoning. Bucheon were the victors when these two sides met earlier in the season, winning 2-0 thanks to goals from Lee Hyeon-il and Lee Jeong-chan. Overall, from 13 meetings, Bucheon have six wins to Ansan's five and only two draws.

A run of three games unbeaten with two wins and a draw has propelled Jeonnam Dragons up into the playoff positions, leapfrogging last week's opponents Bucheon in the table after a 2-0 win over the Reds. With just five points separating first from fourth, the Dragons have their sights set firmly on the top three. Up next for the Jeon Kyung-jun's men, however, is another side who have sights set on climbing further up the table. Following relegation from K League 1 last year, Gyeongnam FC were tipped as being one of the favourites to win promotion in 2020. However, Seol Ki-hyeon and his men make the trip across to South Jeolla Province on the back of five games without a win in the league with three draws and two losses. A third Gyeongnam win of the season would do wonders in the Changwon-based outfit's pursuit of the playoffs. These two sides have met twice already this season, once in the league and once in the FA Cup. Whereas the league fixture ended in a 0-0 stalemate, Jeonnam ran riot against Gyeongnam in a 4-0 FA Cup 3rd Round win on July 1st. Jeonnam will still be without the services of  striker Julian Kristoffersen as the Norwegian is suspended.

Daejeon will be looking to put last week's 4-1 defeat to Suwon FC behind them when they take on fellow promotion favourites Jeju United this Sunday. The Purples will have Bruno Baio suspended which gives manager Hwang Sun-hong something to think about ahead of this third versus second clash. Daejeon have the second-best attack in the league but Islanders have won their last five away matches and have the second -est defence in the league. Jeju United came from behind to seal a 2-1 win in the capital against Seoul E-Land last weekend. Under the stewardship of Nam Ki-il, Jeju United sit second in the K League 2 table and just two points behind Suwon FC. The Tangerines have the second stingiest defence in the division having shipped just eight goals from 11 matches, three of which came against Daejeon in the first meeting this season . Daejeon made the one-hour flight to the Island on 23rd May in Round 2 of the 2020 season for what was the first meeting since 2015. On that afternoon, Jeju managed to let a two-goal lead slip and concede two in the last 10 minutes to lose 3-2 to Hwang Sun-hong's men. Key player Kim Young-wook is suspended for United with former Daejeon youth prospect Kang Yoon-seong likely to deputise.