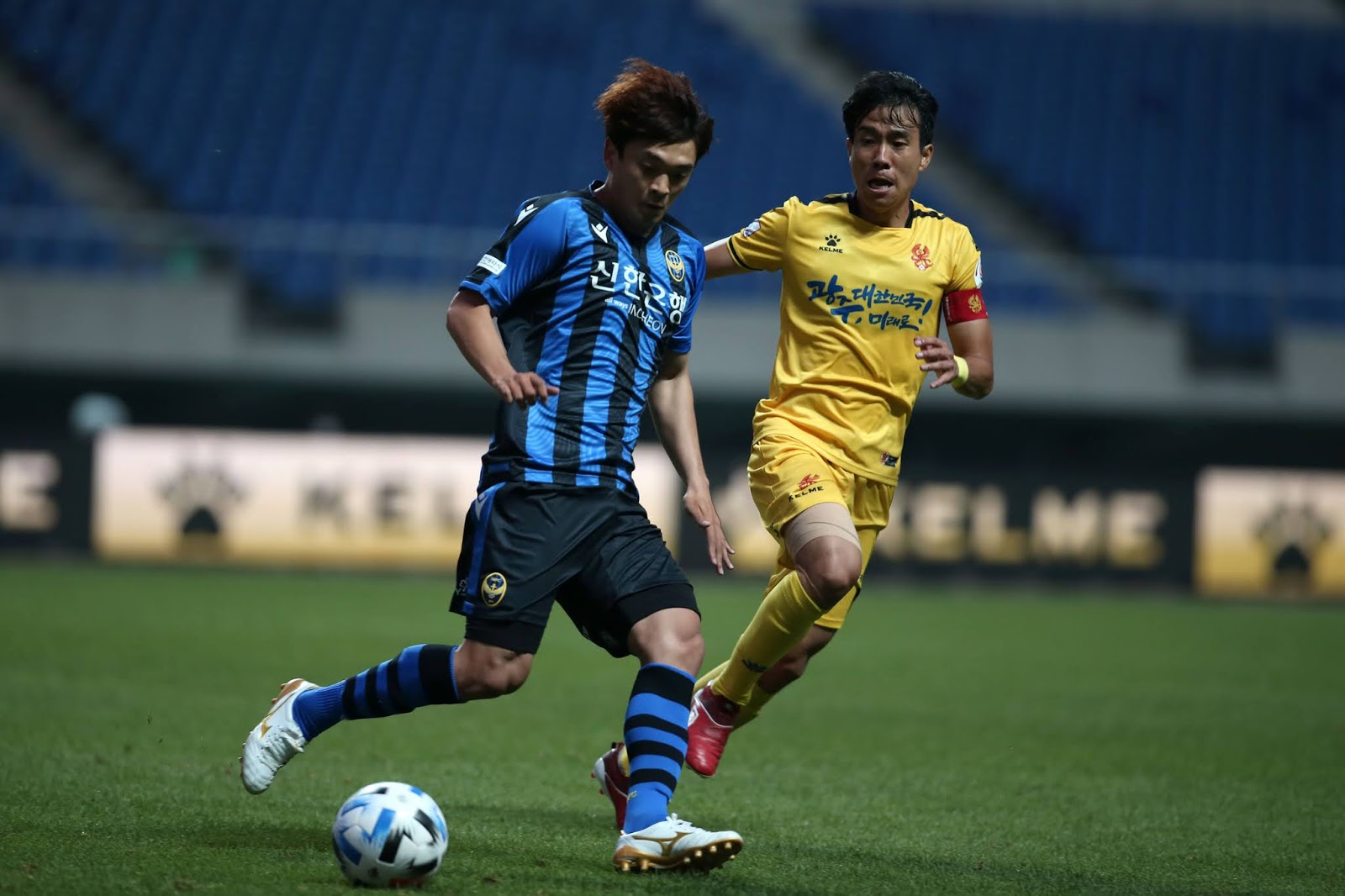 Ulsan Hyundai retained their position at the top of K League 1 last weekend with a dominant win away at much-fancied Sangju Sangmu. Travelling to an unpredictable Busan IPark side this time out, fans of the Horangi will also be intrigued by the result in Jeonju as second-placed Jeonbuk Hyundai Motors take on third-placed Pohang Steelers. There's a season-defining fixture at the bottom of the table as steadily improving Incheon United host out-of-form Gwangju, while FC Seoul make the short journey to Seongnam FC. Peter Hampshire previews this weekend's fixtures.

Jeonbuk Hyundai closed the gap to league leaders Ulsan Hyundai back to three points on Sunday after watching Ulsan Hyundai lay down a marker the day before. They did so in comfortable fashion, dispatching FC Seoul by a three-goal margin. Goals from Han Kyo-won and Lee Seung-gi put Jose Morais' side 2-0 up at the break before the Portuguese boss introduced Gustavo for his debut. The former Corinthians striker headed home a debut goal at the back post before fellow newcomer Mo Barrow made a positive impact from the bench. Both came off the bench once more as Jeonbuk progressed to the FA Cup semi-finals on Wednesday, beating Busan IPark 5-1 with Gustavo netting a hat-trick. Veteran striker Lee Dong-gook remains an injury doubt.

Pohang Steelers salvaged a point against battling Incheon United to move up to third in the table. Falling behind to Stefan Mugoša's penalty, K League 1's second top goal scorer Stanislav Iljutcenko equalised almost instantly but Kim Ki-dong's side were unable to find a winner. Aleksandar Paločević continued his recovery from injury playing 30 minutes from the bench to add to the 10 he managed a week prior. His return to the starting line-up would likely see Manuel Palacios return his more natural position on the wing. Meanwhile, Kim Sang-won has settled into the starting 11 at left back in recent games. Shim Dong-woon grabbed two late goals as Pohang also progressed to the FA Cup semi-final with a 5-1 victory away at FC Seoul.

Seongnam FC collected a second consecutive clean sheet against Gangwon last time out and they're in action at Tancheon once more hosting an FC Seoul side looking for their first league win in five. With Incheon United showing signs of improvement, both these sides know how important three points could be for their season. With recent signing Na Sang-ho getting up to speed, Kim Nam-il has been able to name an unchanged side in his last two league games. However, both these sides face a selection dilemma of having played FA Cup quarter finals in midweek, in which Seongnam set up a semi-final tie with Jeonbuk by virtue of beating Suwon Samsung Bluewings. Earlier this season Tomislav Kiš netted his first goal for the club in the reverse fixture.

Choi Yong-soo's Seoul didn't lay too many punches on Jeonbuk last time out. Sitting 11th in the league, Choi will be hoping the high-profile capture of Ki Sung-yueng will engineer an upturn in their fortunes. Ki is not expected to feature just yet, but the former Swansea City and Newcastle United midfielder is no doubt an impressive capture to influence the dressing room. Seoul fans will be hoping Osmar is available for selection, especially having been so key in his side's 3-1 win over Seongnam last season. Choi selected a full strength team in the FA Cup quarter final defeat to Pohang, with Kim Jin-ya and Adriano perhaps pushing for starts after settling for spots on the bench.

Incheon United appear to have arrested their poor form heading into the second half of the season. Three straight draws have demonstrated a more solid back line with Incheon having taken points off three of the league's top four sides. Consecutive 1-1 draws urgently need to be turned into wins if they are to close the five-point gap to safety and Ji Eon-hak and Stefan Mugoša's form gives fans cause for optimism. Rashid Mahazi is doubtful through injury, meaning caretaker boss Lim Joong-yong will likely opt for Mun Ji-hwan to play centrally, although there are positives on the injury front with captain Kim Ho-nam pushing for a start having returned to the bench of late.

Gwangju's house warming party at their new stadium was spoiled by Suwon Samsung Bluewings last time out, with the Yellows falling to a 1-0 defeat. Running out of ideas to break down a stubborn Suwon defence, Gwangju's key men Felipe and Yeo Reum cut frustrated figures. Gwangju's fantastic form in June will seem a distant memory for Park Jin-seop, who will be without central defender Rustam Ashurmatov thanks to his late red card last weekend. Brazilian talisman Felipe stands fourth in the K League goal scoring charts and will look to get on the end of crosses from top Korean youth talent Eom Won-sang. Set piece specialist Lee Eu-ddeum is a doubt through injury, replaced by Lee Soon-min against Suwon.

Gangwon have arguably played some of the most pleasing on the eye football in K League this season but remain stuck in mid-table and nine points behind the Asian Champions League reckoning. After a narrow defeat at leaders Ulsan, Kim Byung-soo's side ground out a point at Seongnam last time out. Returning to Ulsan for the FA Cup quarter final in midweek, Gangwon started well but succumbed to a three-minute Yoon Bit-garam brace early in the second half. Gangwon lost 2-0 to Sangju in the reverse fixture earlier this season thanks to a Kang Sang-woo penalty and Moon Seon-min strike, but can take heart from the corresponding 2019 fixture whereby Kim Ji-hyun's goal started off a comfortable 4-0 victory.

Sangju Sangmu legend Kim Tae-wan has once again manufactured a great team dynamic at the military outfit and performed admirably in having his side compete at the top. Capable of beating any K League side on their day, Sangju did uncharacteristically collapse against Ulsan last time out. Taking the lead through Kang Sang-woo after just four minutes, it looked as though the Horangi would be added to recent scalps of Jeonbuk and Daegu. Kang is enjoying a stellar season, involved in a lot of Sangju's best moves and netting on six occasions. Boss Kim will be without Park Byung-hyun through suspension.

Suwon Samsung Bluewings recorded their first league win since June to leapfrog Gwangju into ninth in the table. A 1-0 victory courtesy of Park Sang-hyeok's pinpoint strike off the post, Suwon put in a really organised performance to keep a first clean sheet in five games. With Adam Taggart absent, Sulejman Krpić led the line with Ko Seung-beom putting in an impressive performance in midfield. Caretaker boss Ju Seung-jin reverted to goalkeeper Yang Hyung-mo, having dropped Yang for regular keeper No Dong-geon a week prior. Suwon let a one-goal lead slip to Daegu as recently and game week eight with Cesinha turning on the style late on. However, the Bluewings did have the better of encounters last season remaining unbeaten as Terry Antonis marked his debut with an assist to feed fellow countryman Adam Taggart in Daegu. Taggart was absent for victory in Gwangju and for the FA Cup defeat to Seongnam so is unlikely to feature here.

Hoping to be more fresh than their opponents having not played in the midweek FA Cup quarter finals, Daegu returned to winning ways in style having lost their previous three in all competitions. Dejan Damjanović swept home Jeong Seung-won's cross to open proceedings before Cesinha scored arguably the goal of the weekend, showing sublime control from Gu Sung-yun's long-range pass to curl home from the edge of the box. The only blemish from the evening for Lee Byung-geun will have been Kim Woo-seok's stoppage time dismissal, which means he is unavailable for selection. Nishi Tsubasa can return from suspension but key men Edgar da Silva and Hwang Soon-min remain injury doubts.

After impressing in recent weeks, Busan found the short trip to Daegu a step too far and fell to a 3-0 defeat. Park Joon-kang's sending off and subsequent suspension may see Lee Sang-jun return in a reshuffle at the back with veteran left back Yun Suk-young a long-term injury doubt. Resurgent of late with four straight wins catapulting the Royals into the FA Cup quarter finals, Busan did not concede in three home outings prior to their midweek cup exit to Jeonbuk. Kwon Hyeok-kyu has taken plaudits for his central midfield performances, with the 19-year-old freeing up the U-22 selection quota for Choi Pil-soo to return in net. Cho Duk-jae's Busan are coming into a tough run of fixtures on paper, facing three of the league's top four. Perhaps with this in mind, Cho made 10 changes for the Jeonbuk match resting star men Lee Dong-jun and Kim Jin-kyu.

Winning 10 of their last 11 in all competitions, Ulsan Hyundai strengthened their claim for the K League title with a 5-1 win away at Sangju Sangmu. Despite falling behind, Kim In-sung's equaliser preceded a Júnior Negrão brace before Lee Dong-gyeong rounded off the victory in style with a fine curling effort. Júnior  now boasts 17 league goals in 13 appearances and is a major part of the reason why Ulsan have netted over two goals a game on average. The Brazilian scored against Busan earlier this season in a 1-1 draw but was not required in Ulsan's last visit to the Gudeok, a 2-0 FA Cup victory in 2018 on their road to the final in Daegu. Eyeing a potential league and cup double, Kim Do-hoon oversaw progression to the FA Cup semi-final in midweek to set up an East Coast Derby against Pohang.