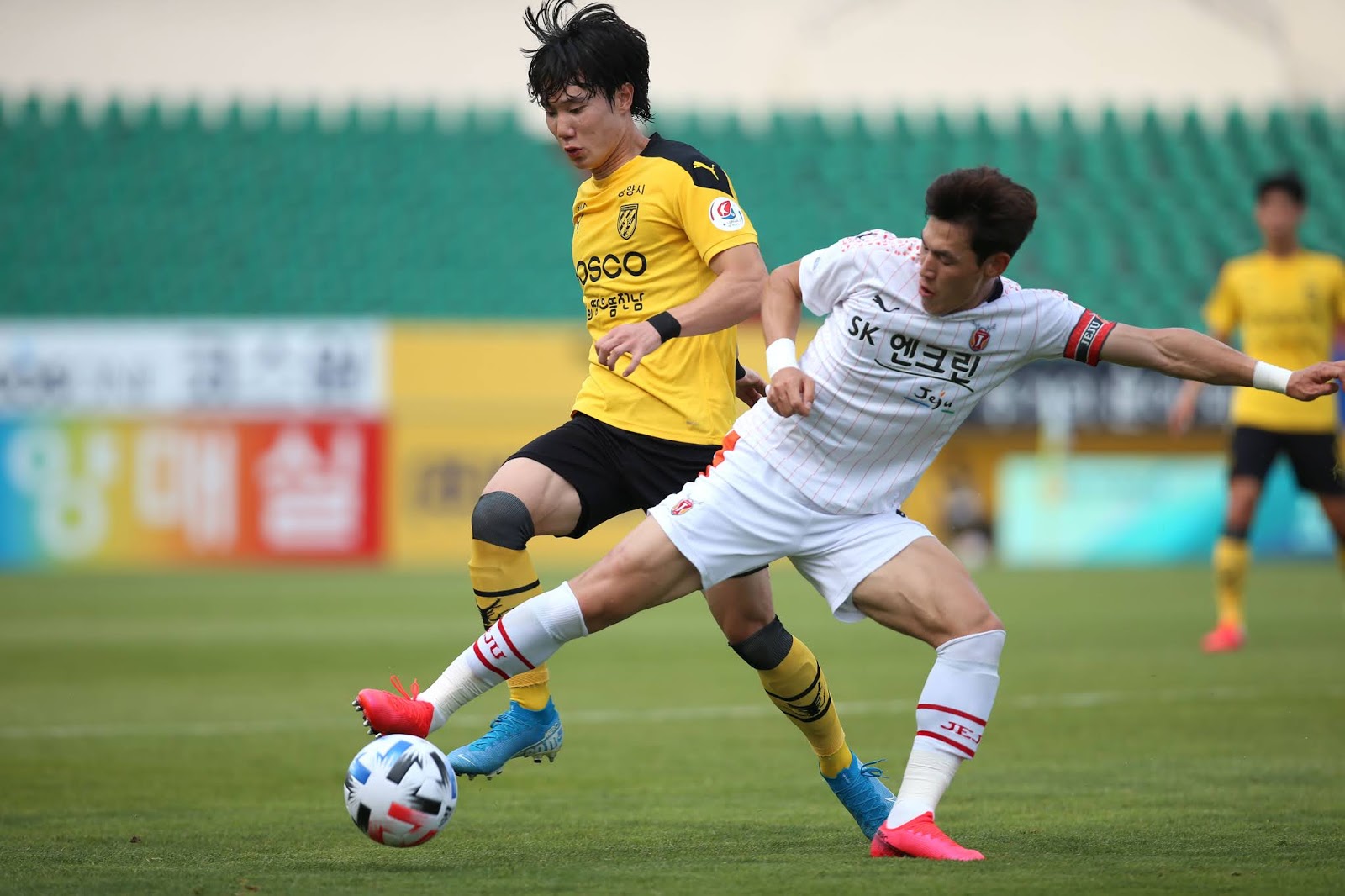 Fans are back in stadiums at long last and this weekend in Round 13 of the 2020 the Hana 1Q K League 2 campaign there is no shortage of intriguing matches. Third host fourth as Jeju United welcome Jeonnam Dragons to the island in a game that could have playoff implications, and fifth take on sixth as Seoul E-Land will look to ward off any revenge sought by Bucheon FC 1995 who let a two-goal lead slip to lose 3-2 when the Leopards and the Reds met earlier in the campaign. For all that and more, K League United provides a comprehensive guide to Round 13.

Chungnam Asan got back to winning ways last time out, coming from behind to beat Seoul E-Land in the capital. The result was Asan's second win of the season and enough to secure eight place in the table. Up next is the visit of Daejeon Hana Citizen, another team who picked up a positive result after defeat the week previous. The Purples overcame Jeju United at home in a 2-1 win to move up to second but are still four points behind league leaders Suwon FC. A win for Hwang Sun-hong's men would at least be enough to keep them in second. Asan, meanwhile, could jump up to seventh with a win should results elsewhere go their way. The two sides played out a 2-2 draw earlier in the campaign, Andre with a brace for Daejeon, Armin Mujakic and Jang Soon-hyeok for the Owls. Interestingly, these two sides have the worst defensive records in the league with Asan shipping 19, Daejeon 18. Daejeon will be without Park In-hyeok through suspension and Lee Kyu-ro through injury but defender Lee Woong-hee is nearing a return while striker Bruno Baio is back after suspension. For Asan, Austrian forward Armin Mujakic is out after picking up a fifth yellow of the campaign last time out.

After a damaging defeat to Daejeon last time out, Jeju United will be determined to bounce back this coming weekend. However, up next for the Tangerines is the visit of Jeonnam Dragons, a side one place and two points behind Nam Ki-il's men in the table. When these two sides met earlier in the season it was the Dragons who came out on top with a 1-0 win thanks to centre back Kim Ju-won's 59th minute strike. The Dragons boast of the meanest defense in K League 2 with just even goals conceded and are on a run of five unbeaten in the league with three wins - including two 4-0 wins - and two draws. However, Jeon Kyung-jun's men have just one away win this term, Jeju just one home defeat. Kim Young-wook is back in contention again after missing the defeat to Daejeon through suspension. The Dragons have no players unavailable through suspension but midfielder Hwang Ki-wook has the unwanted record of the joint-most yellow cards in K League 2 thus far with six.

The classic top versus bottom clash takes place on Saturday as league leaders Suwon FC host Ansan Greeners, the side who currently prop up the K League 2 table. A professional performance and the subsequent 2-0 win over FC Anyang last time out kept Suwon FC top of the league with a four-point cushion. The league's sharpest shooters with 27 goals also boast of the second tier's most dangerous striker in An Byong-jun who has 12 goals in 12 league appearances already. Ansan Greeners, meanwhile, sit bottom and make the short trip across Gyeonggi Province on the back of five league games without a win. The Green Wolves, however, have kept two cleansheets in a row having drawn 0-0 with both Gyeongnam and Bucheon in their previous two matches. Suwon came out on top in a 2-0 win in previous meeting this season, An Byong-jun and Cho Yu-min on the scoresheet in mid-May. Last term, Ansan managed to pick up a 3-2 win at Castle Park on 17th August, emerging as 3-2 victors.

Despite being tipped to be one of the front runners in K League 2 this term, Gyeongnam FC find themselves in the bottom half of the table. The Reds have just two league wins to their name in 2020, one of which was against their opponents this Sunday - FC Anyang. Seol Ki-hyeon's Gyeongnam team are without a win in their last seven with four draws and three losses. Up next is the visit of FC Anyang who make the long trip south to Changwon with a less-then-stellar record themselves. Kim Hyung-yul's men have just one win in eight and sit ninth in the table. The previous meeting this term ended in a 3-2 Gyeongnam win for what was the first encounter in three years. In 2017, Gyeongnam recorded three wins to Anyang's one and have lot at home to the Violets just once in six matches overall - a 1-0 reverse in October 2017. An Anyang win on Sunday could see them move level on points with Gyeongnam, for the Reds, however, a win is a must if the south coast side are to mount a playoff push. Neither team have any players unavailable through suspension but Gyeongnam centre back Lee Kwang-seon is one yellow away from a one-match ban.

Sixth placed Seoul E-Land sit just three points off the playoffs having picked up four wins and three draws so far this term. Chung Jung-yong and his men have, however, lost their last two heading into Sunday's meeting with Bucheon FC 1995. In both games, the Leopards let a one-goal lead slip to end up losing 2-1, first to Jeju United in Round 11 then to Chungnam Asan last weekend. Sunday's visitors to Jamsil, Bucheon, are also without a win in their last two and have just one win in seven outings. This mid-season slump has seen the Gyeonggi Province outfit slip outside the playoff places and into 15th - two points above Seoul E-Land. A win for the Reds would put further daylight between the two teams whilst also get Song Sun-ho's side's playoff push back on track. A win for Seoul, meanwhile, would show that the Leopards are serious about promotion this year. There has been no shortage of goals when these two sides have met of late having played out five-goal thrillers in both of their two previous K League encounters. Bucheon will be out for revenge after letting a two-goal lead slip to end up on the losing side when the two teams met in June this year. The Leopards will be without the services of midfielder Choi Jae-hoon due to suspension but forward Richard Sukuta-Pasu is back after a one-match ban.