After both progressing to the FA Cup semifinals midweek, Saturday evening sees Jeonbuk Hyundai Motors host Pohang Steelers in a battle between second and third as both sides look to keep up with K League 1 leaders Ulsan Hyundai. K League United's Head of Editorial Matthew Binns previews the match.

Jeonbuk manager José Morais opted for a strong line-up in midweek's cup action while his counterpart Cho Deok-je may well have been focusing on this weekend's fixtures. Busan made ten changes from the previous weekend's defeat to Daegu FC. Despite this, it was Busan who got off to a positive start with Gustavo Vintecinco heading in within four minutes. However, the home side's lead would be short-lived when Jeonbuk striker Cho Kyu-sung headed into the top-left corner of the Busan goal not long before the half-hour mark.

Within a minute of the restart, Jeonbuk had taken the lead through Han Kyo-won when the winger was at hand at the far post to tap in a Son Jun-ho corner. Substitute Gustavo Henrique would then also add to the visitors tally, pouncing on a spilt ball from Busan keeper Kim Jeong-ho. Gustavo would then bag his second with a header moments later before slotting in to make it five for Jeonbuk and a nine-minute hat-trick for himself, ensuring his side's progression to the semifinals.

FC Seoul continued their run of disappointing form with defeat to Pohang Steelers in the FA Cup. It took 12 minutes for Song Ming-kyu to open the scoring cutting into the box from out wide on the left and sending in his shot with the aid of a deflection. The visitors then doubled their lead in the 30th minute when a goalmouth scramble saw the ball fall to Kim Kwang-suk who buried it with ease. Seoul did manage to pull one goal back moments later however when Jung Hyun-chul headed in Ju Se-jong's free-kick.

The second-half saw the Steelers attempt to push on, yet they were unable to find their third until late when Stanislav Iljutcenko broke the Seoul offside trap in the 83rd minute to effectively seal the points. Pohang did not end there though and capitalised on the dispirited home side, finding two further goals in injury time through Shim Dong-woon and Iljutcenko to seal progression through to the semifinals.

This will be the 85th meeting between the two sides with Jeonbuk leading narrowly on victories 33-30. Pohang last won in Jeonju in May 2018, however, claiming a 3-0 victory against what was admittedly a rotated Jeonbuk squad who had one eye on a crucial AFC Champions League knockout match in a few days time.

When these two sides met earlier in the season, Jeonbuk came away with all three of the points after a late injury-time winner from Kim Min-hyeok sealed it for the visitors. Earlier in the match, Pohang's Lee Sung-mo had opened proceedings before Han Kyo-won equalised.

Jeonbuk come into this match with a couple of names missing. Striker Lee Dong-gook remains an injury doubt while loanee defensive midfielder Lee Soo-bin will be ineligible to play against his parent club. With Lee Soo-bin also being one of Jeonbuk's U22 options, the ramifications elsewhere on the pitch mean that Cho Kyu-sung will likely keep the striker spot with Gustavo starting from the bench once more.

Having played a strong squad midweek, there may also be some rotations from Jeonbuk manager José Morais. Given the stature of their opponents though, it seems unlikely that the core of the side will be altered too much. Lee Yong will probably return at right-back after being rested midweek and Modou Barrow could well be handed his first start on the left if the manager feels Murilo or Kunimoto need to recuperate.

Pohang Steelers will also have close to a full selection but will be without captain and defensive midfielder Choi Young-jun. Choi is on loan from Jeonbuk as part of a swap deal with Lee Soo-bin and therefore cannot play against his parent club on Saturday. Alterations to accommodate could lead to Nam Jun-jae being handed his first start. While Pohang also fielded a strong side midweek, they too may be cautious about rotating given that they are facing Jeonbuk so a similar squad to last weekend is anticipated. 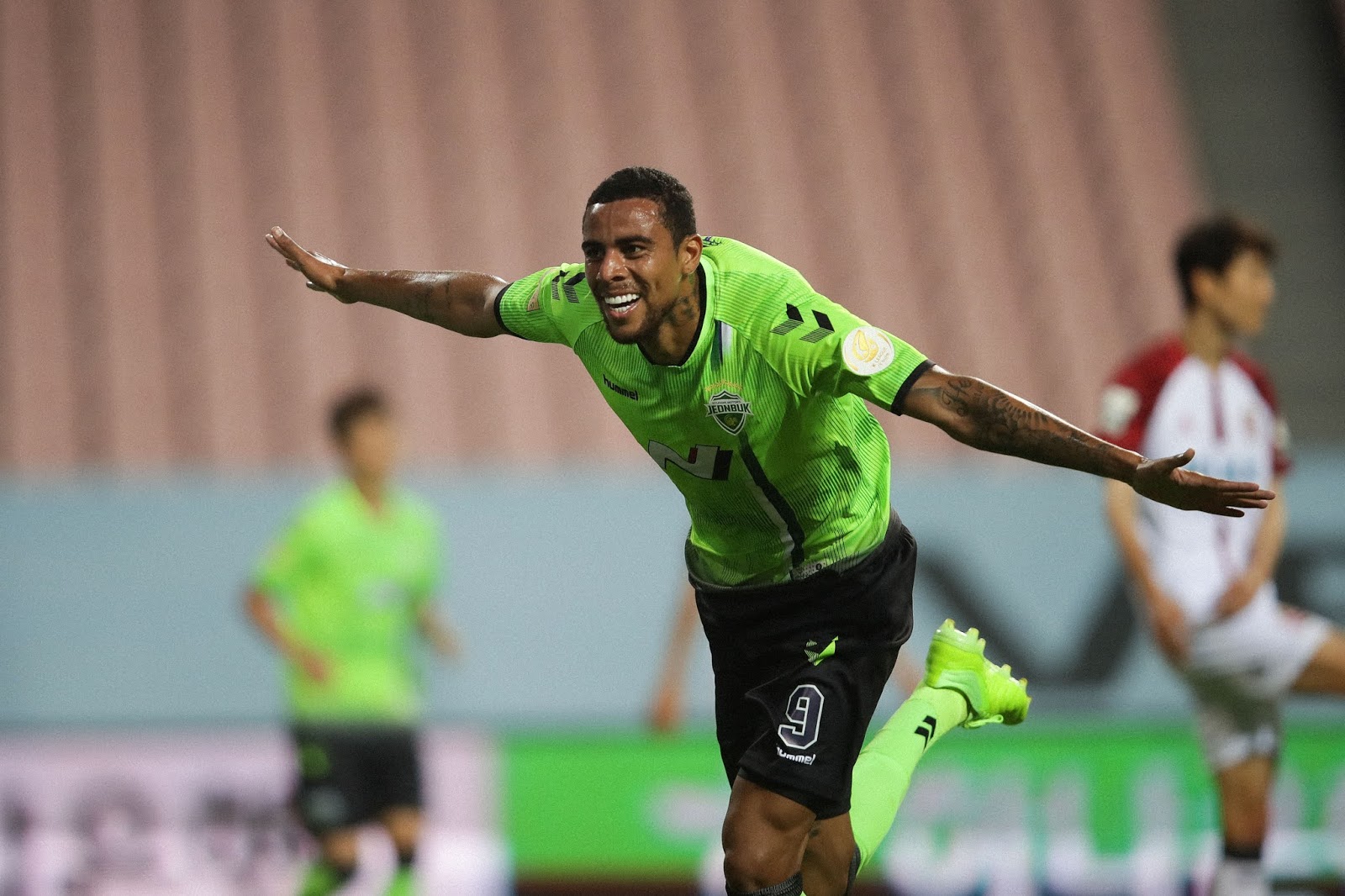 Ahead of last weekend, there were question marks raised over Jeonbuk's lack of depth up front with Lars Veldwijk having transferred to Suwon FC and Lee Dong-gook injured. The club announced in the run-up to the match the signing of Gustavo Henrique from Brazilian side SC Corinthians for a significant fee but, as with all signings new to the league, there were concerns the player would need some time to adapt.

Two second-half substitute appearances in four days since and the striker nicknamed 'Gustagol' has stormed into Korean football with four goals already to his name. His first proved to be a close-range header against FC Seoul before scoring another with his head against Busan IPark in between two tap-ins, which he had found himself in the right position for.

Gustavo is expected to make a cameo from the bench once more this weekend as Jeonbuk will likely field Cho Kyu-sung to meet the U22 quota but, if Pohang's defence find themselves tiring, a second-half introduction for the Brazilian could prove to be of benefit to the Green Warriors once more. Worryingly for the rest of the division, Jeonbuk are now scoring again just as the season reaches the halfway stage. 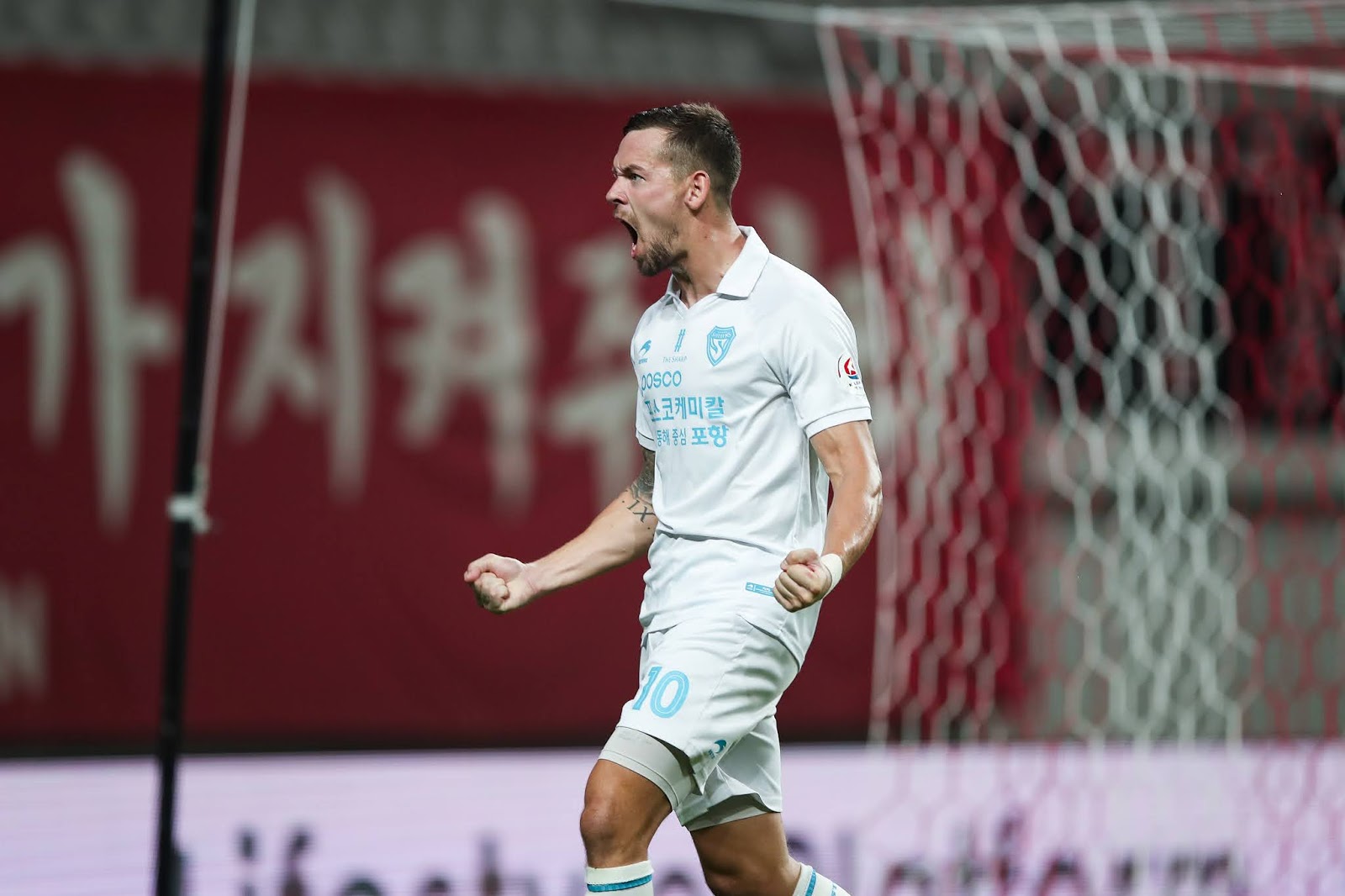 While Jeonbuk fans may well be excited about their new striking addition, Pohang Steelers forward Stanislav Iljutcenko has been keeping his side's fans entertained as he continues to find the net each week on a consistent basis. Last weekend saw the German score his tenth K League goal of the season, surpassing the nine he scored in 18 matches last year after joining in the summer.

Unfortunately for Iljutcenko at present, his goalscoring exploits are being somewhat overshadowed by Ulsan Hyundai's Junior Negrao yet they certainly should not be overlooked. Combined with support from Manuel Palacios, Song Min-kyu and Aleksandar Paločević, Pohang have created one of the divisions most formidable front four, with Ijutcenko leading the charge and terrifying defences.

Last time these sides faced, Jeonbuk opted to field Kim Min-hyeok at centre-back with a remit to closely mark the striker. While Kim has been dropped in favour of Choi Bo-kyung, the home side may look to a similar strategy in order to keep Iljutcenko from getting on the scoresheet.

Jeonbuk's last few league matches have been against struggling sides in the division and, because of that, the North Jeolla outfit has often come up against compact defences which they have struggled to break down. Against Pohang they may well be given more space in the final third though it will come at the expense of having to defend against a team that is unbeaten in seven and has only dropped four points in that period. A closely contested affair is expected, but hopefully one with considerable attacking talent on display that will entertain neutrals.