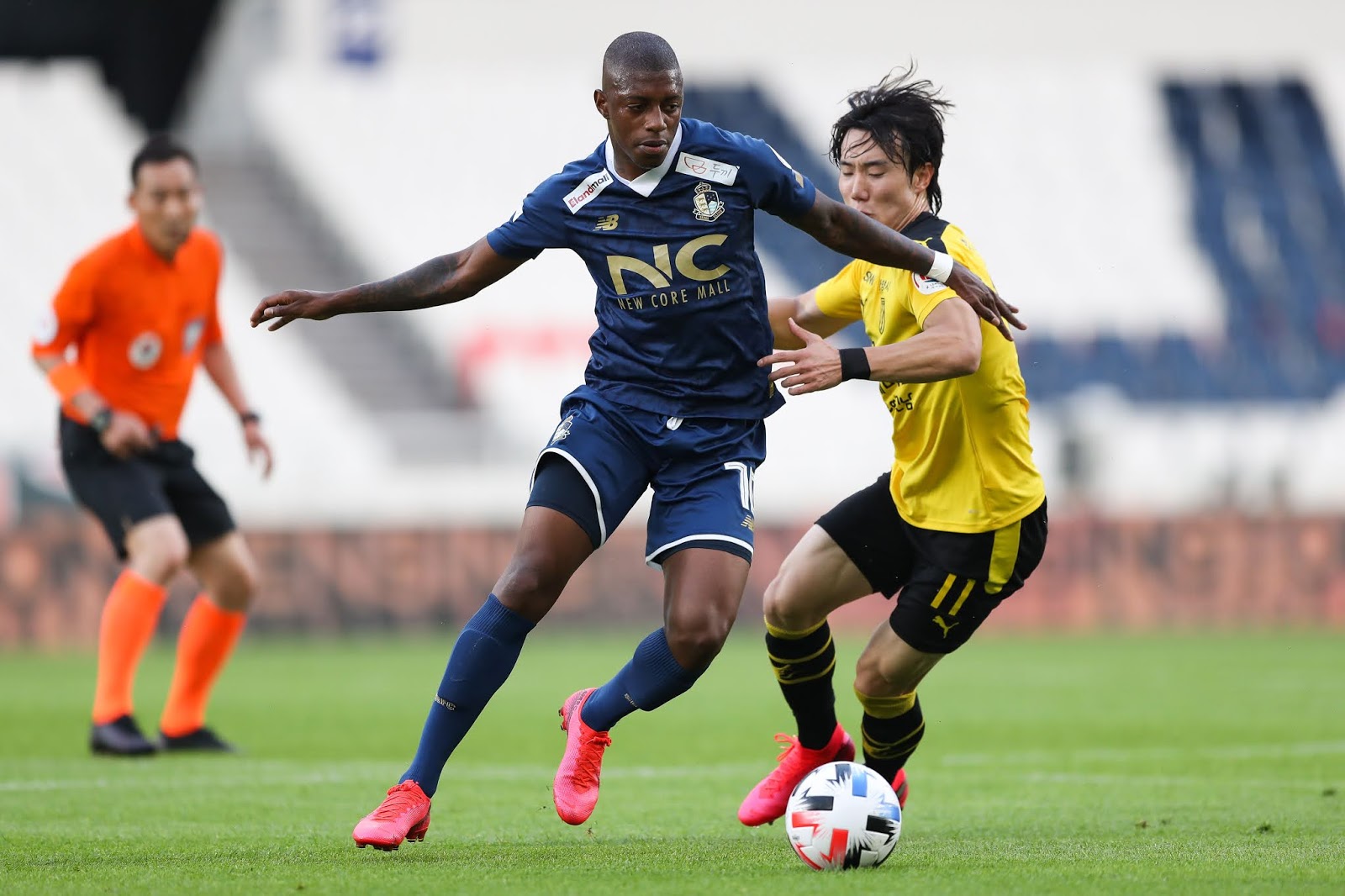 Things remain tight at both ends of the Hana 1Q K League 2 table by virtue of Ansan Greeners' upset of league leaders Suwon FC last weekend. The boys in blue and red did not take advantage of an opportunity to pull away from the pack, as Daejeon Hana Citizen pulled to within a single point of the summit, while Jeju United had to settle for a draw and are now four points off the pace.  The latest round of fixtures sees the latest installment of the Line 4 Derby, while the match of the round sees fourth placed Jeonnam Dragons play host to Seoul E-Land.  Daejeon host Gyeongnam FC, Bucheon are at home to Suwon FC and Jeju United face Chungman Asan on Monday night to round out the schedule.

Ansan pulled out what can be considered the upset of the season with their 2-1 victory over league leaders Suwon FC last weekend. Han Jeong-woo got the hosts out to an early lead after just fourteen minutes, but the Green Wolves would come roaring back with Felipe Augusto leveling proceedings on 39 minutes. Kim Tae-hyun scored the winner on the hour mark.

Anyang currently occupy the root of the table with just ten points from their thirteen matches, but they only have a minus four goal differential, so this one will be much closer than some may predict.

Ansan won the only meeting between the two when they opened the season against each other in May, with Lee Rae-jun's 51st minute strike proving the difference on the night. It is Anyang who have a noticeable edge in the head to head overall, as they have won seven matches to Ansan's three while three other contests have ended in draws.

Daejeon Hana Citizen are now just a single point off the top of the league following their 2-1 victory away to Chungnam Asan last weekend. Goals from Kim Seung-seop and Andre Luis were enough to see off the Owls in a match where the hosts were reduced to ten men for the majority of the second half. The Brazilian has now scored ten goals for the Purples this season and will look to be on target once again against the Reds. Park In-hyeok is the only suspension in the side and is not due a return until at least the end of the summer, if not into the fall.

Gyeongnam currently sit seventh in the table following a narrow one goal win against FC Anyang. Baek Sung-dong scored the only goal of the match in the 51st minute. The win snapped a four match winless streak for the Reds, who can climb the table to fourth with a win, but needs results elsewhere to go in their favor as well.

Jeonnam Dragons were fortunate to come away with a point against Jeju United last time out after the islanders dominated much of the match but were unable find a winner and take all three points. Goalkeeper Park Jun-hyuk was a major reason for the Dragons being able to withstand constant pressure from the islanders as he put in another strong performance as he has done all season, which his league-leading seven clean sheets will attest to. Oleg Zoteev did not play last weekend and his status for the match against the Leopards is still up in the air. The Dragons' new signing Hernandes made his first start last time out and should be strongly considered for the starting eleven again if the Uzbek is unable to go.

Seoul E-Land put on a wonderful display against Bucheon, winning comfortably and convincingly by a 3-0 margin. Leandro put his side in front after thirty minutes, and Won Ki-jong scored a second half brace in a three minute span to seal E-Land's fifth win of the season. The Brazilian brought his goal tally to six on the season and he also leads K League 2 in assists with four. He just recently signed a permanent deal to stay at the club, and with his services intact for the foreseeable future, he could be a player to build around moving forward.

Both teams come into the match off losses, as Bucheon were outclassed by Seoul E-Land, while Suwon FC fell to their fourth loss of the season against the Ansan Greeners. This will be a telling match for Bucheon, who are still in the conversation for the playoffs despite some less than convincing performances in their past two matches. Things will not get easier for them going up against the league's best offense, and it may be difficult to shake the effects of such a heavy loss last round.

Suwon will look to get back to winning ways and they certainly have the firepower to do it, as An Byong-jun has continued his scintillating form virtually all season on his way to thirteen goals thus far this campaign, good for a goal per match clip. The emergence of Masatoshi Ishida has also given the Suwon attack another dimension.There's also the recent arrival of Lars Veldwijk  who joined from Jeonbuk Hyundai Motors in K League 1.

Jeju United missed a golden opportunity to secure all three points against a Jeonnam Dragons side they should have beaten considering how much control they had over the match, but in the end, would have to settle for a draw. Asan, meanwhile, went down to ten men against Daejeon Hana Citizen and despite a valiant effort, being at a disadvantage ultimately cost them as the Purples came away 2-1 victors.

The previous time these two clubs met earlier this season, Jeju won by a two-goal margin thanks to goals from Jung Jo-gook from the penalty spot four minutes before halftime, and Lee Chang-min with a quarter of an hour left.

Nam Ki-il experimented with the lineup against Jeonnam, starting Lim Dong-hyuk as the main striker and it paid off as he scored Jeju's only goal of the match. It does bring a major issue to the forefront for the islanders, however, and that is the lack of a consistent number one striker. Joo Min-kyu has not scored in two months and the club has only scored sixteen goals in their twelve matches thus far in 2020. Philip Hellquist will be one to watch for Asan, as the Swede has notched four goals in his past five matches. Armin Mujakic returns from suspension while Park Jae-woo will serve the first of his two-match ban after being sent off with a straight red against Daejeon.