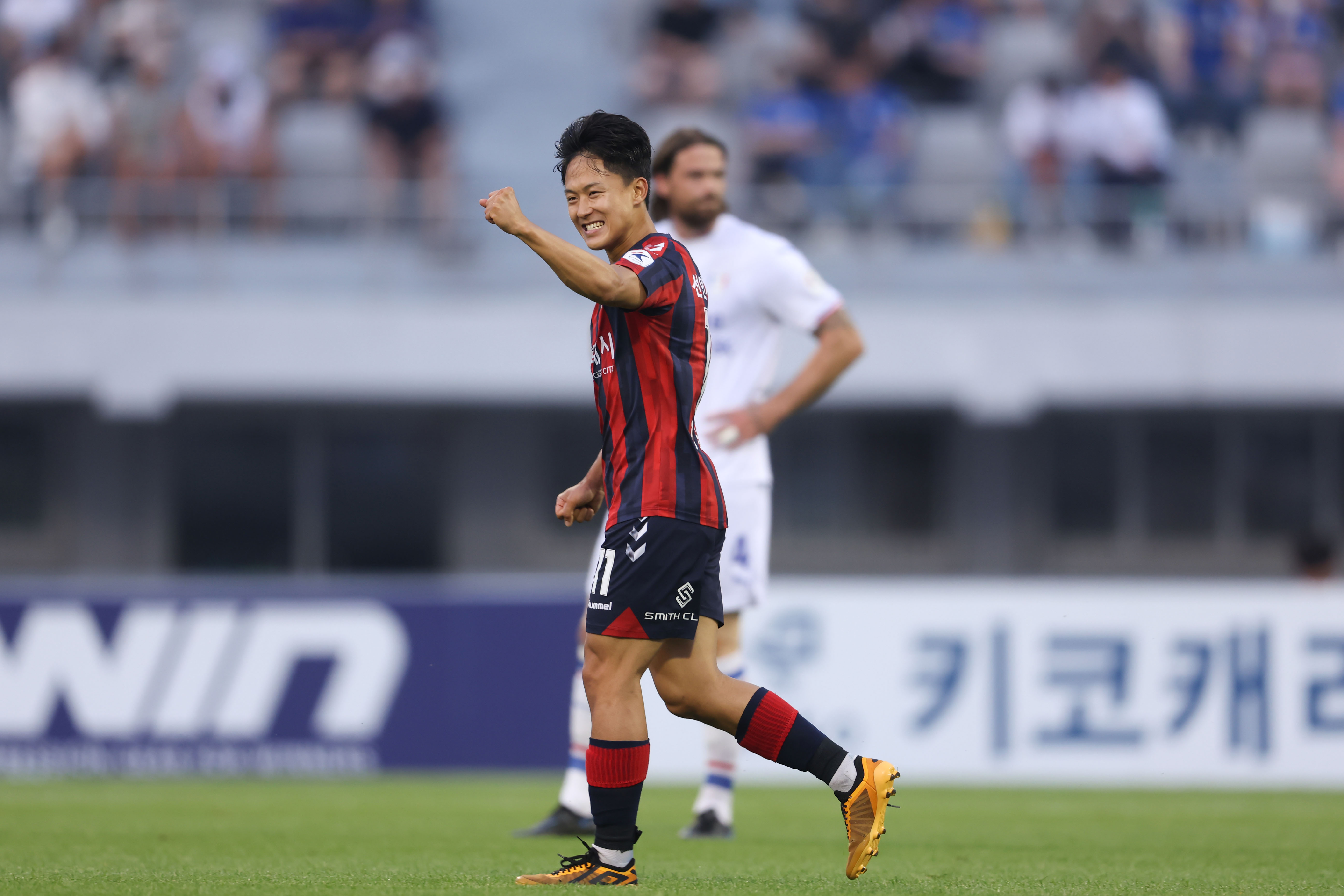 Suwon FC star Lee Seung-woo is having the season of his life, playing regularly, scoring goals and even dancing. The 24-year-old former Barcelona youth says that his desire to play for South Korea at the World Cup is what's helping him have such a great season. Lee sat down with KLeague.com to chat about the season so far and his aspirations for the rest of the year.

Lee Seung-woo: "First of all, I’m enjoying my time here. It's the first time for me to play in the K League, and I had a lot of anticipation for the season when I was preparing throughout the preseason. Overall, I was quite looking forward to the start of the season. Once it did, it turned out great for both myself and the team, which makes me feel that we can end the season on a high."

PN: What made you choose Suwon FC?

LSW: "Everyone, including the director (Kim Byung-do) and the coach (Kim Do-kyun), sounded genuine that they wanted me. Also, it seemed like they could really help me do my best here. It actually was a huge challenge for me, and a tricky choice. I would say the key factor for my decision was the coach (Kim Do-kyun) and the director’s support. I truly felt that the club was very genuine and that's why I chose this team."

PN: What do you like most about Suwon FC?

LSW: "Well, the relaxed atmosphere is one thing, the chemistry between the players, the feeling in general, has made me feel freer than I have at other teams. By doing so, we can prevent any miscommunication or conflicts from happening within the squad. It seems like we have this strong bond as a team to get through the season. I would say it’s a strong point of Suwon FC at the moment."

PN: What has Kim Do-kyun done to help you have this great season?

LSW: "I try to communicate with him as much as possible. It doesn’t matter if it is during the training session or on the pitch. Just like anyone else out there, I myself have some bad habits or things I should improve on. It’s been a huge help to be able to work with the coach, who clearly points out such things and helps me understand. As a coach, he makes it easy for players to understand his demands or needs. So, players can take constructive criticism quite easily."

PN: Why did you choose to sign for a K League club and not one in Europe?

LSW: "As it’s a World Cup year, in order for me to even get a shot to play at the World Cup, I needed to find a way to get as much playtime as possible, to show my skills, to get fit as possible. In that sense, K League seemed like the best option for me to do so. Also, the coach has helped me a lot to feel at home here. I decided that now is the time to settle down, rather than going for another challenge. That mindset led me to K League."

PN: What's it like having so much media attention? Is that difficult for you?

LSW: "It was definitely a weight on my shoulders, but as I came to the K League, that pressure changed into a supporting force for me. When I was in Europe, there were few chances for me to get in touch with the fans, but now that I’m here in South Korea, it’s possible for me to see everyone during the matches.

"Everyone has high expectations, and so is the interest from the media. In that sense, the pressure might have been more compared to my time in Europe. Nevertheless, it’s the life of a football player, which made me work even more and get as fit as possible. From doing so, I believe things will turn out great for me on the pitch. "

PN: Who are the toughest defenders you have faced, both in K League and in Europe?

LSW: "I would say last year's MVP, Hong Jung-ho from Jeonbuk Hyundai Motors. He’s really experienced and strong defensively. Someone I’ve played against in Europe…Leonardo Bonucci who was playing for AC Milan at the time, and now went back to Juventus. He was something different."

PN: Which of your Suwon FC goals has been your favourite so far?

LSW: "I guess the one I scored against the Pohang Steelers at home really stuck in my memory."

PN: Is it your personal goal to win the golden boot this season?
LSW: "Honestly, I don’t really care too much about that. I’m not a striker, and there are different potential nominees like Joo Min-kyu from Jeju (United) and Cho Gue-seong from Gimcheon (Sangmu), who are strikers. I believe Joo Min-kyu scored what, 15 goals by now?  I’d just like to end the season without getting injured."
PN: Is the desire to play in the World Cup what's driving you on and helping you have this great season?
LSW: "Definitely, in the national team, you can grow so much as a player, and also is something that I’ve always been dreaming about as a professional player. I’d like to get into the national team squad regularly, to see how I play against other teams. To see how I have improved over time. My desire to do so is bigger than anyone else out there, and I want to show my eagerness in every training session and match. So, if I do get a chance to get into the national team squad, it would be great motivation and a driving force for me to get better."
PN: What message do you have for the Suwon FC fans?
LSW: "We’re seeing a lot more fans at home games, and the atmosphere has been great. Thanks to that, us players are scoring a lot of goals recently as well. There are a few matches left in this season, which we hope more people can come to watch. By doing so, we can make this city the ‘city of football’ as it is."
Paul Neat
Editor-in-Chief
Translation: Kim Tae-hong
다음 글 2022 Hana 1Q K League 2 Round 38 Preview
이전 글 2022 Hana 1Q K League 1 Round 30 Preview
K LEAGUE