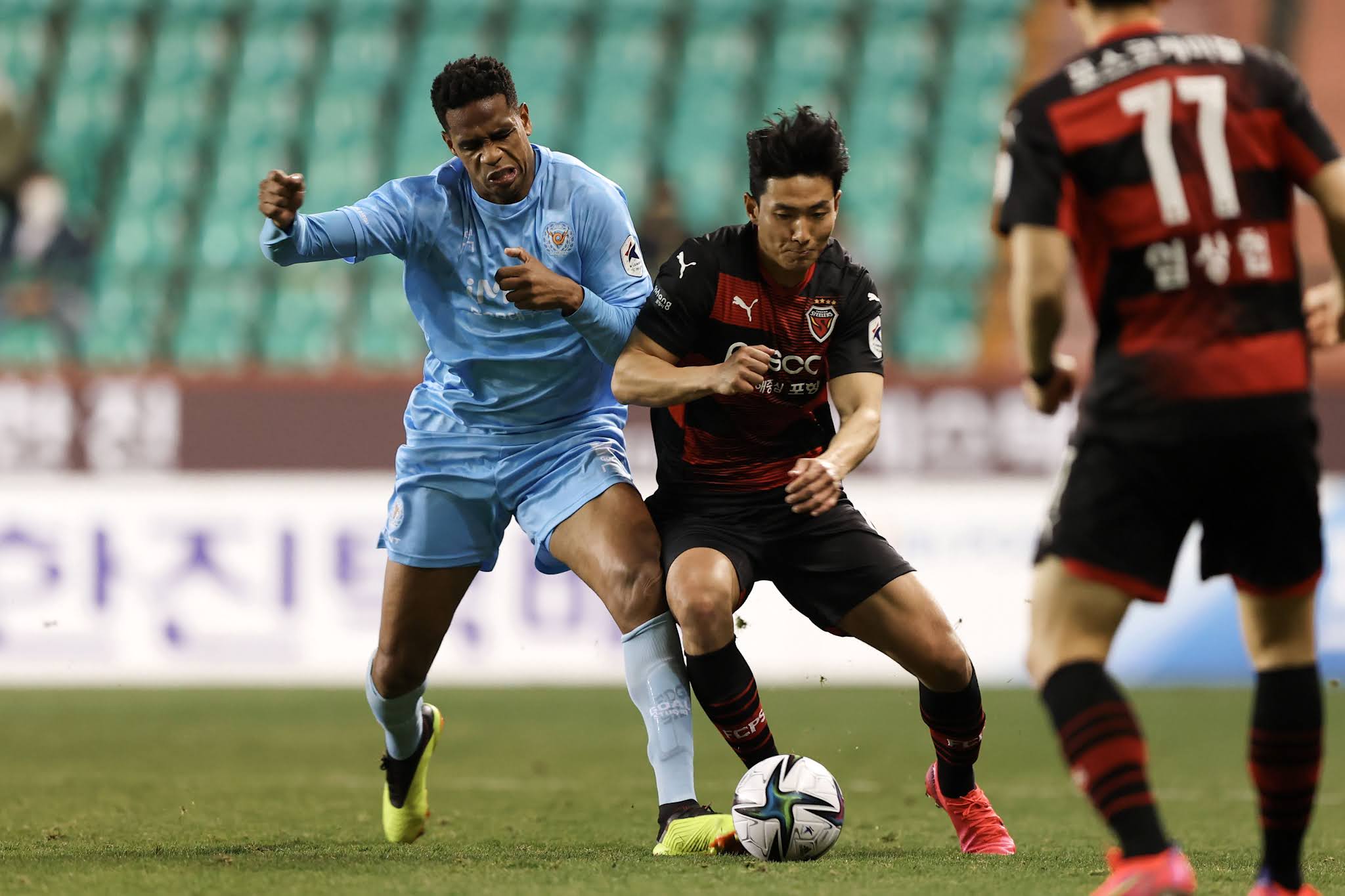 Pohang Steelers and Daegu FC will warm-up for their respective midweek AFC Champions League Round of 16 matches with a 2021 Hana 1Q K League 1 Round 28 matchup. For Pohang, a win would mean that they continue to lead the chasing pack in the race for third. Daegu, meanwhile, will be keen to leapfrog the Steelers in the league table. Who will come out on top at the Pohang Steel Yard this Friday? K League United Columnist Shibajee Das previews the encounter.

A rare away victory at Jeonju Castle last week meant that Pohang Steelers are up to third in the league standings, Go Young-joon scored the lone goal of the contest in the 17th minute against reigning champions Jeonbuk Hyundai Motors. The Steelers' last win prior to that came in mid-August when they triumphed 3-1 against Suwon FC at home. The defeat of Jeonbuk is sandwiched between draws with FC Seoul and Suwon Samsung Bluewings. Therefore, Pohang has two wins, two draws and one defeat in their last five matches.
Daegu FC will make the trip to the Steel Yard on the back of a goalless stalemate and a 3-1 win against the same opposition, Seongnam FC. Prior to that, the Sky Blues had suffered five consecutive league defeats in a difficult run of form in August. In fact, the 3-1 victory over Seongnam is Daegu's solitary league win since the league resumed after the AFC Champions League break. However, they are currently in fifth place in the league standings, just a point behind Pohang.

Pohang Steelers
The home side does not have any recent injury concerns. However, keeping in mind the pivotal midweek trip to Osaka, Kim Gi-dong may want to rest a couple of his star players. Mario Kvesić could return to the starting lineup while Lee Gwang-joon could also start in central defence. 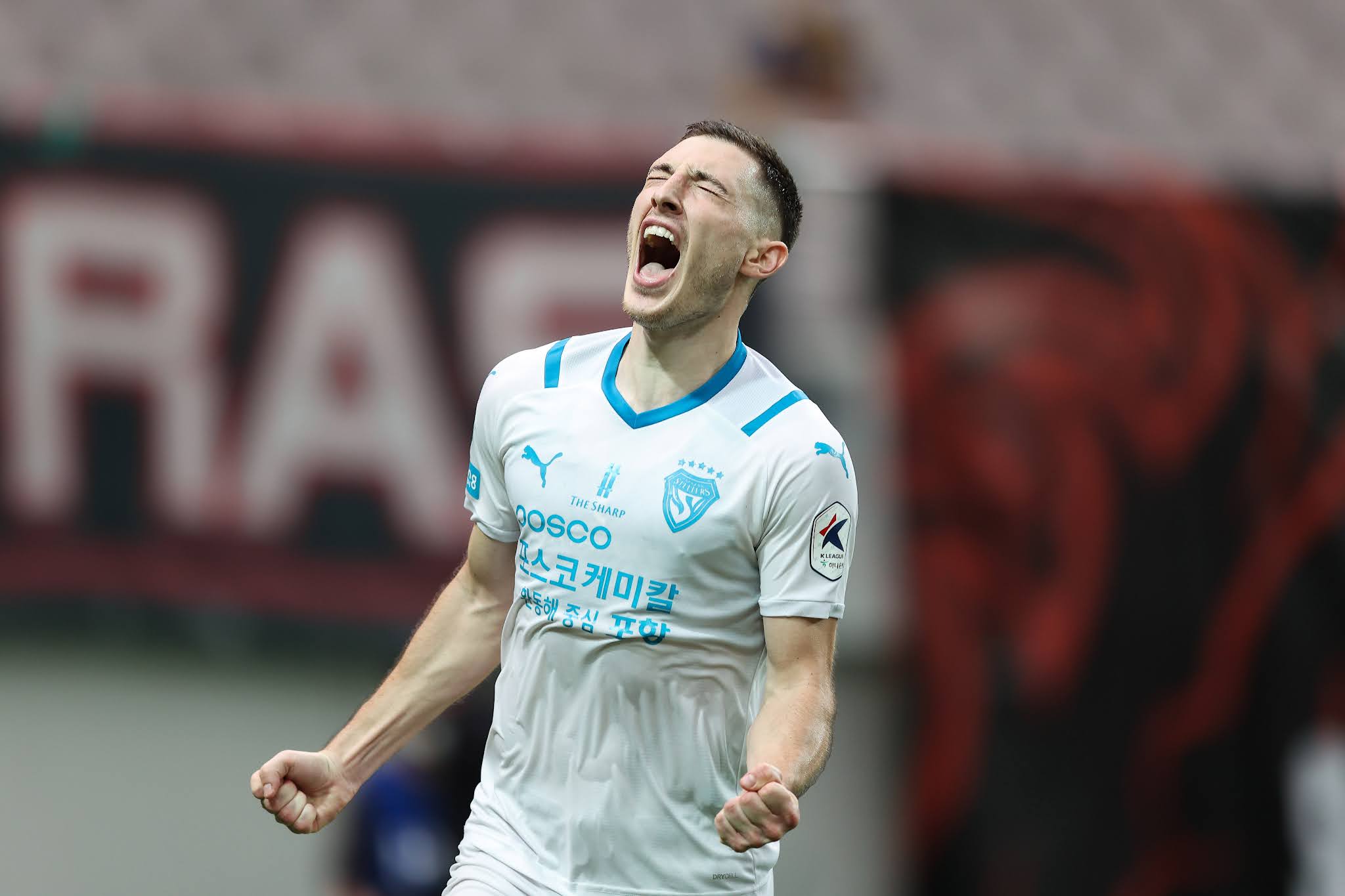 Lee Soo-bin might get the nod in the centre of the midfield. The talented Kwon Gi-pyo is expected to replace either Manuel Palacios or Lim Sang-hyub in one of the wide roles. Borys Tashchy and Kang Sang-woo were altogether absent from the matchday squad against Jeonbuk, with the the latter on international duty with Korea.
Daegu FC
Lee Byung-geun will also make changes to the side, in order to keep the pack fresh ahead of their trip to Nagoya. Hong Jung-woon continues to remain an injury concern, owing to a neck issue. The talismanic figure of Cesinha picked up a hamstring problem but reports in the press have suggested that the Brazilian ace is expected return this Friday. New signing Bruno Lamas had initially started in central midfield against Gwangju FC. However, since then the Brazilian has been deployed in a more advanced role. 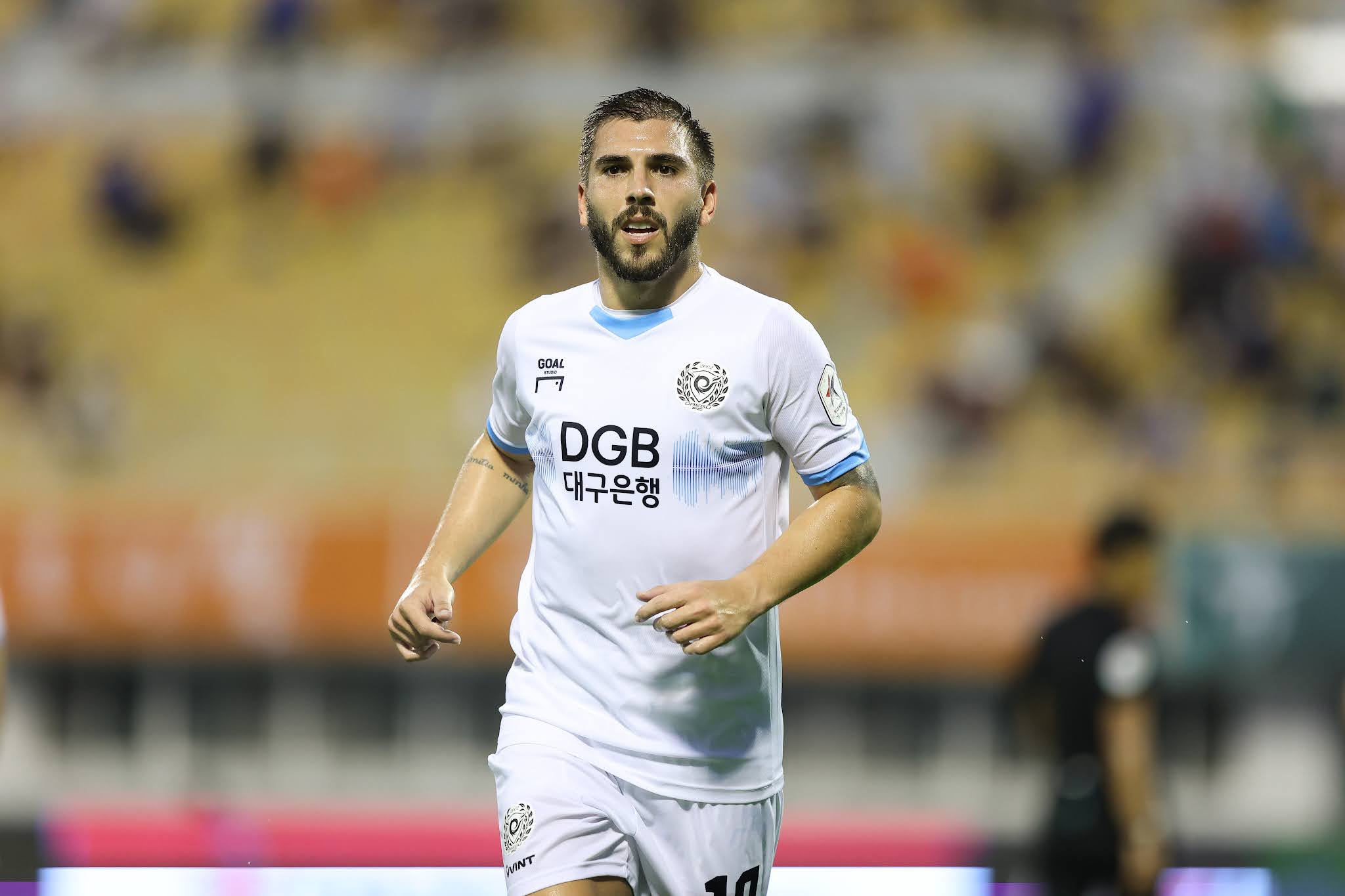 Lamas continues to occupy the pocket behind the two strikers and is once again expected to do so. Veteran Lee Keun-ho could get a start in the attack. An Yong-woo and Park Han-bin might also come into the starting lineup. Tsubasa Nishi rarely gets a start these days, but this match could be one of those rare outings.

The most recent meeting between the two sides came just over a month ago at the DGB Daegu Bank Park. The game ended in a 1-1 draw, with two second-half strikes. Park Byung-hyun opened the scoring for the hosts before Go Young-joon struck to ensure that the points were shared. Back in April, the teams had played out a goalless draw in the corresponding fixture.
Over the years, there have been 48 meetings between Pohang Steelers and Daegu FC. Pohang has 22 wins compared to Daegu's 11 and 15 draws. Over the last 10 encounters, Pohang has picked up just two wins, five draws and lost three matches. The Steelers' last win came last season at the Steel Yard in a thrilling 3-2 victory. The goals came from Manuel Palacios, Song Min-kyu and Aleksandar Paločević  In terms of goals scored, Pohang leads 72 to 53 overall.
[READ: "We can go straight to K League 1" - Jonathan Moya Interview] 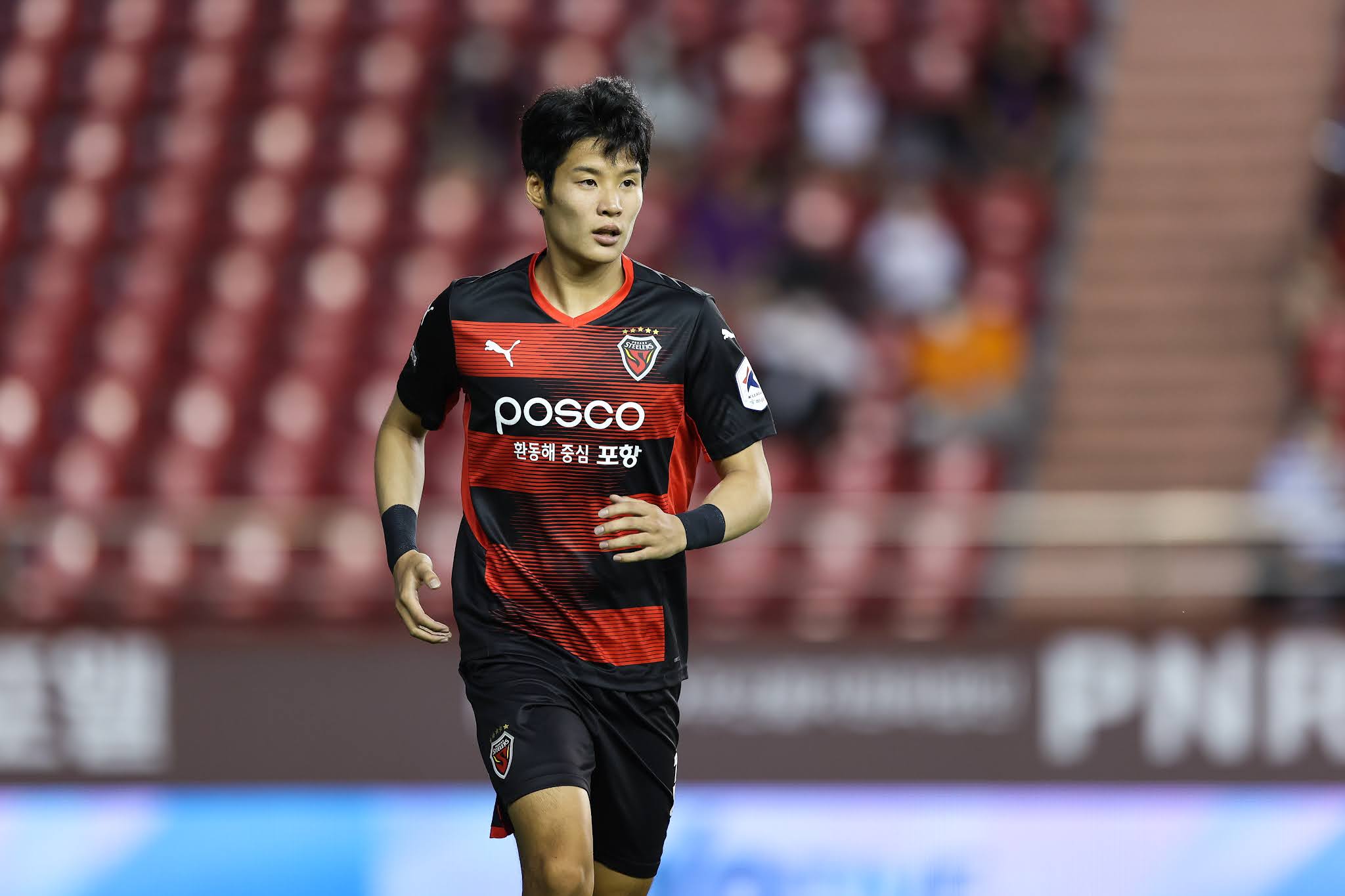 Park Seung-wook has had a fairy tale couple of months. As recently as late June, he was lining up to play for Busan Transportation against Ulsan Citizen in the K3 League. Around the same time, Pohang decided that they needed some depth in their squad and the club came calling for Park. The 24-year-old joined the Steelers on the 6th of July.
Since then, he has gone onto make nine league appearances with eight of them being starts. Kim Gi-dong was eager to utilize the versatility of Shin Kwang-hoon, so he started to regularly use him as a defensive midfielder in the last couple of months. This meant that the right-back slot was vacated where Park Seung-wook seamlessly fitted in and has made the Pohang right-back position his own.
Now with the pivotal AFC Champions League clash just days away, Park Seung-wook will have the final opportunity to impress Kim Gi-dong on Friday. He will be eager to show that he belongs at the highest level and is ready to play on the continental stage. It is shaping up to be quite some story for Park Seung-wook. 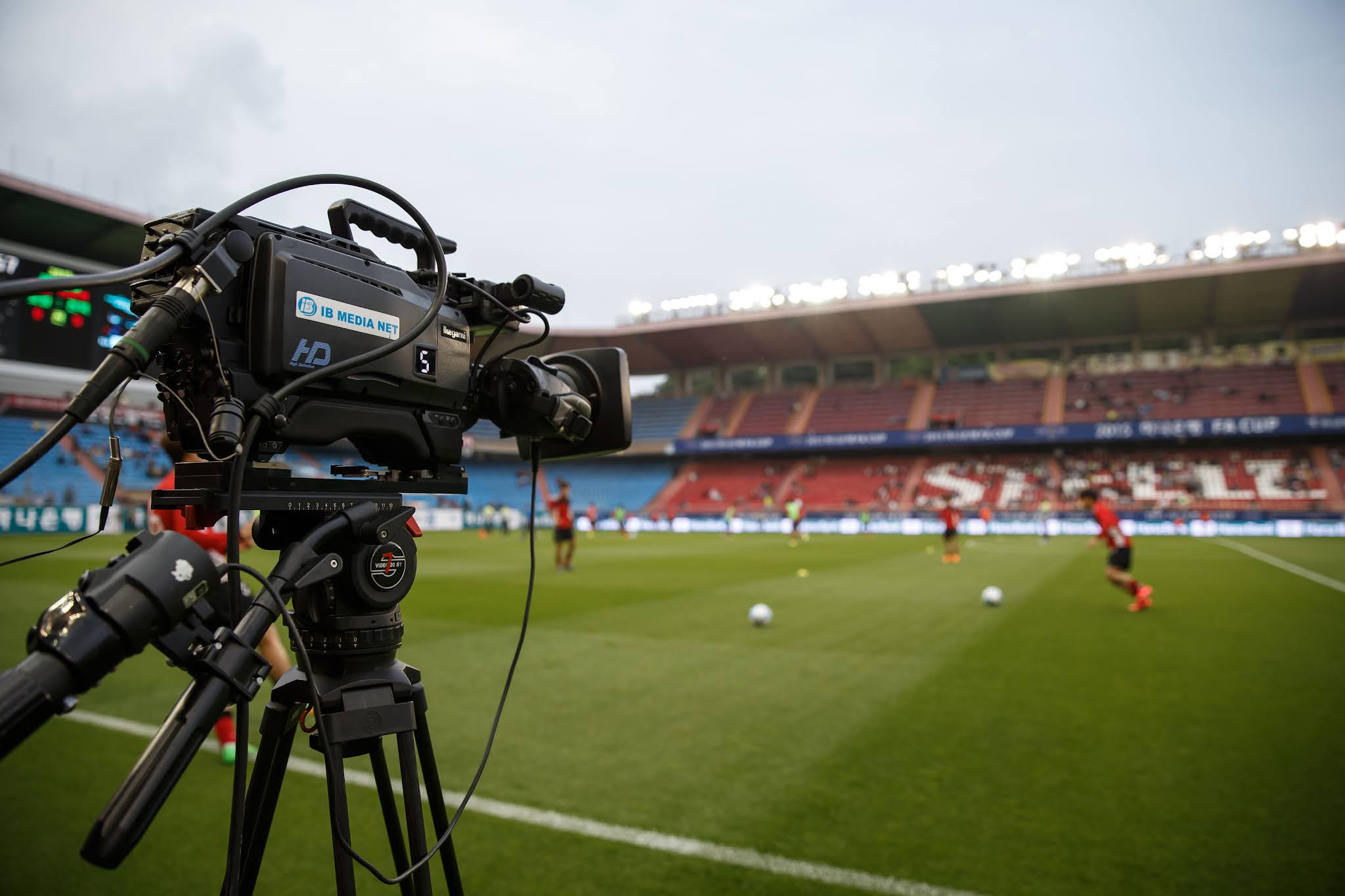