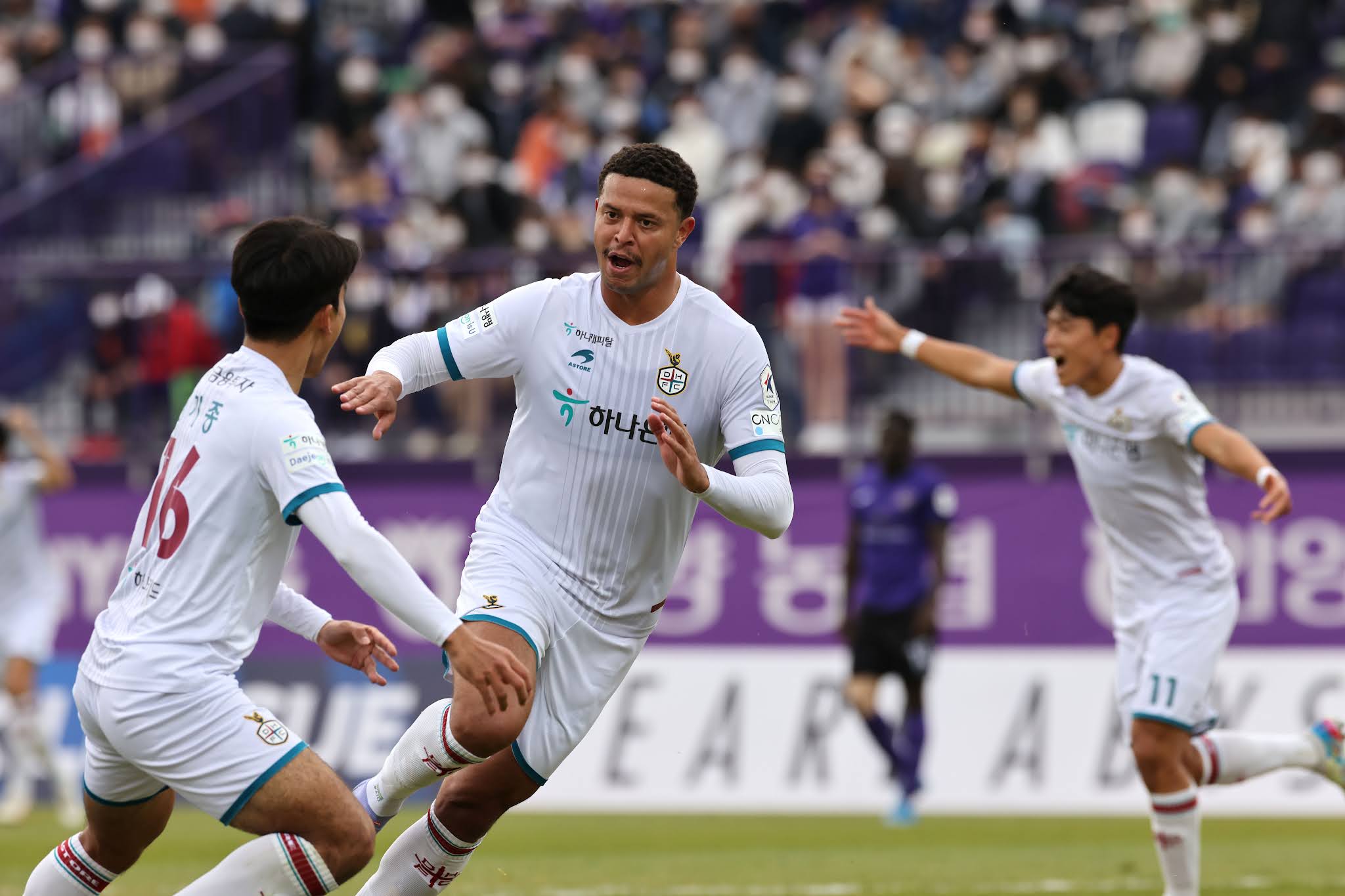 The wait is finally over as this Wednesday Daejeon Hana Citizen will take on Gangwon FC in the first leg of the 2021 K League Promotion/Relegation Playoff Final. The Purples have spent six seasons outside the top flight and so are looking to make a long-awaited return. Gangwon FC, meanwhile, will be determined to avoid being relegated via the playoffs for the second time in their history.

Daejeon Hana Citizen booked their place in the final thanks to a 3-1 win over FC Anyang. Daejeon had to come from behind with captain Park Jin-seop equalising after Jonathan Moya had given Anyang the lead. A Bruno Baio clinched the 3-1 win to make it three wins in five with one loss.
Gangwon FC, meanwhile, have played just two matches under the stewardship of new manager Choi Yong-soo. The first ended 0-0 away to Choi's former employers, FC Seoul. The second was last Saturday's 2-1 win over Seongnam FC, the club's first victory in seven matches. A Kim Dae-won brace was the difference for the Bears.

Despite being on-loan from Gangwon FC, Daejeon's Japanese forward Masatoshi Ishida will be allowed to play for the Purples. It will be the 26-year-old's second playoff final in as many seasons having helped Suwon FC to promotion in the 2020 playoff final.
For Gangwon, Han Kook-young is a doubt through injury having missed the win over Seongnam last time out. Manager Choi Yong-soo will also be sweating over the fitness of Ko Mu-yeol who has missed Gangwon's last five matches with an ankle injury. Suspensions do not carry over from the league meaning that Seo Min-woo, who picked up a fifth booking of the campaign on the final day, will be available. Hwang Mun-ki and former Daejeon defender Rim Chang-woo are both on four bookings but won't be subject to suspensions for the second leg if they are cautioned in the first. However, Kim Ji-hoon should be available having returned from military service with Gimcheon Sangmu.
[READ: 2021 K League 2 Top Threes]

Daejeon have not faced Gangwon FC since 2016 when the two teams were in K League 2. That season, each team picked up two wins from the four meetings, the most recent ending 2-1 to Daejeon in October 2016. Gustavo Sauerbeck and Park Dae-hoon scored in time added on to earn the win. Overall, there have been 24 meetings between the two sides with Daejeon winning 12, Gangwon eight and four draws.
Gangwon won the Promotion/Relegation Playoffs in 2016, eventually beating Bucheon FC 1995 2-1 in the semifinal before easing past Busan IPark with a 1-0 victory in the Promotion Final. Gangwon then faced Seongnam over two legs, drawing the first 0-0 before going up via the away goals rule with a 1-1 draw at Tancheon in the second leg. The Bears came down via the playoffs in 2013, the very first K League promotion/relegation playoff.
This is Daejeon Hana Citizen's first-ever Promotion/Playoff Final. The Purples made it to the Promotion Final in 2018 but lost to Busan IPark and reached the semifinals last year but a 1-1 draw away to Gyeongnam ended the Purples' promotion hopes.
[READ: 2021 K League 2 Award Winners] 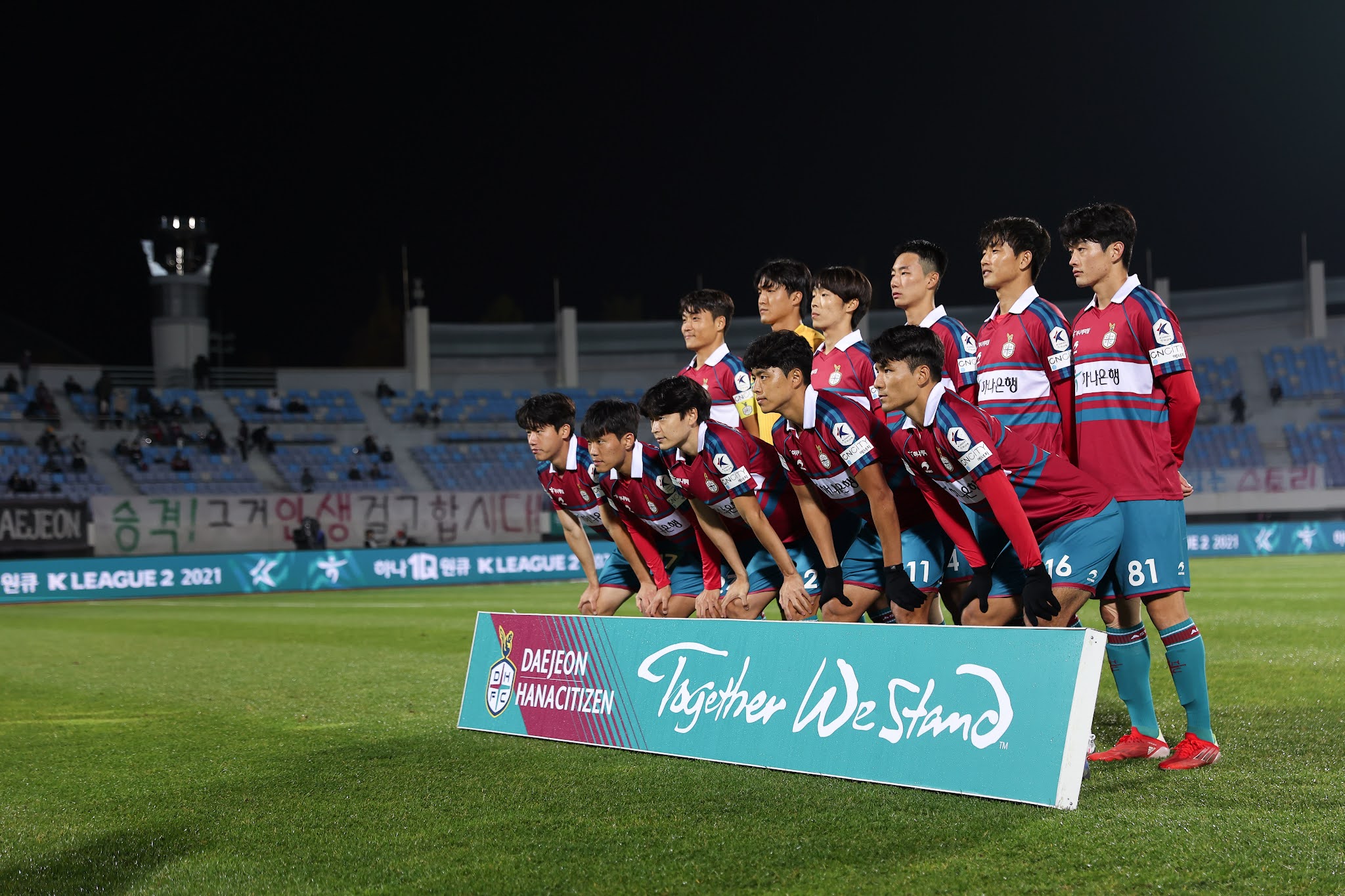 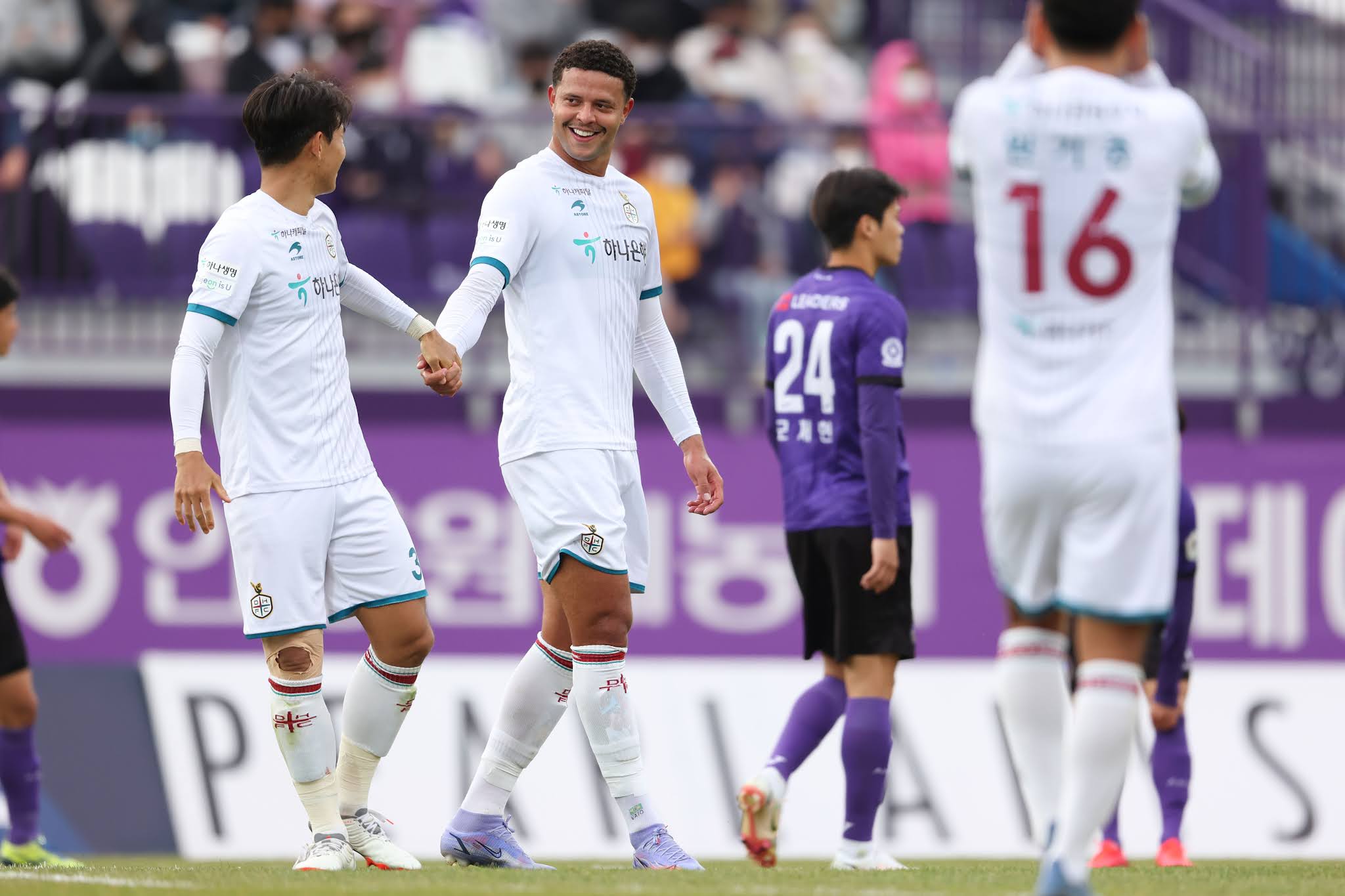 Bruno Baio will almost certainly have a role to play, whether that be from the start or off the bench. Daejeon have the Brazilian to thank for helping turn Anyang game on its head with his two goals. Daejeon's number nine showed neat footwork for both goals but actually ranks fourth in K League 2 for headed shots on goal. He also ranks highly for shots per 90 minutes, sitting fifth in this regard at 3.25 on average. Baio was asked about his role as an impact sub in a recent interview:
"Of course, I want to be in the lineup every player wants to, but I have to understand my spot on the team. And I have to understand what each game asks for, how the game dynamic is and the different characteristics of the opponents. With this context, the final decision is up to the head coach, and I have to be prepared to come in and help the team when I'm called. I always try to pay attention to the game and try to look for where there is space to play. I also pay attention to what defenders are doing and how I can take advantage of the space that they leave to play my football."
Read the full interview: here
Kim Dae-won 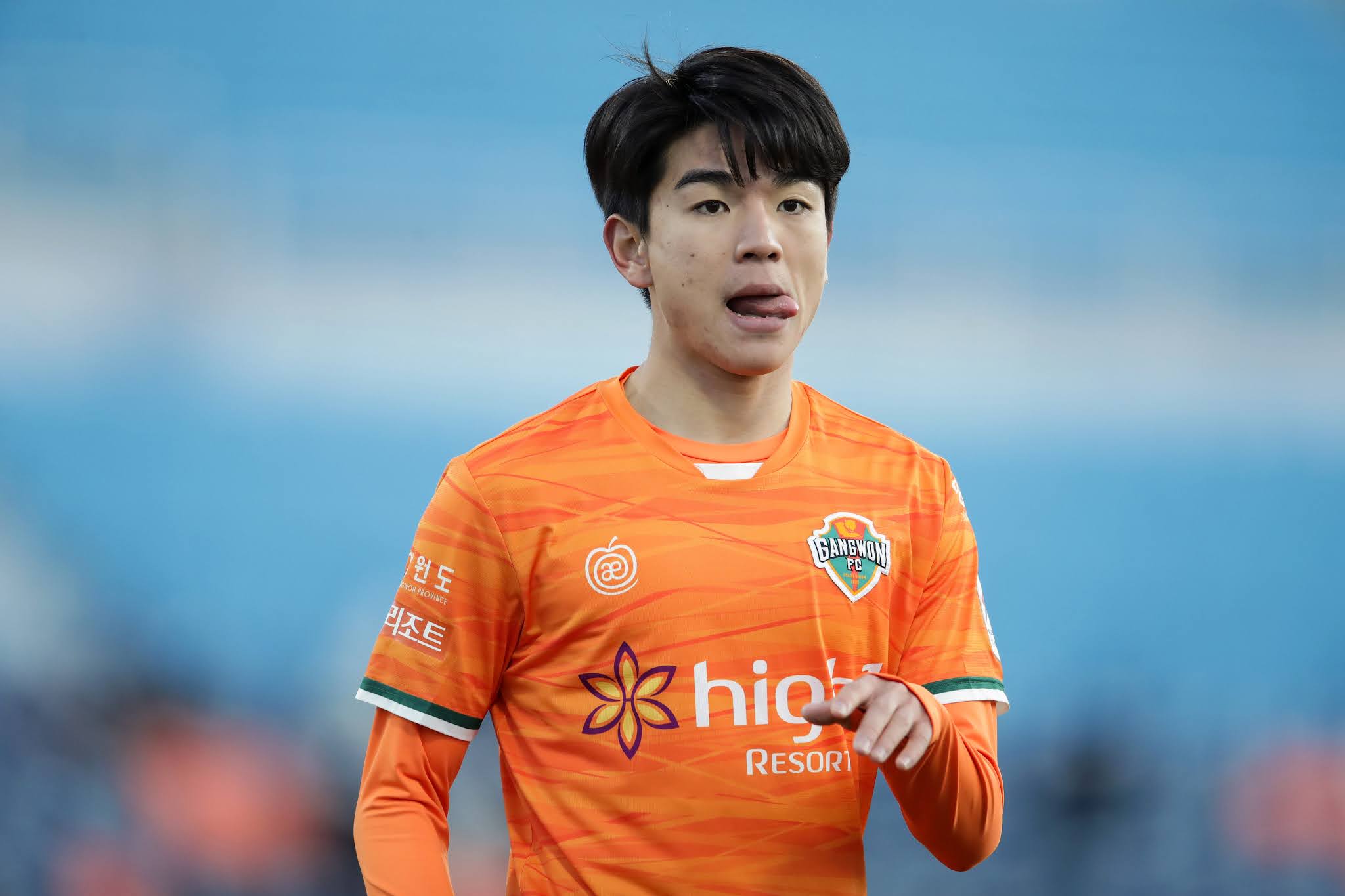 With a final day brace against Seongnam, Kim Dae-won overtook Ko Mu-yeol to become Gangwon's top scorer this season with seven. He is also the Bears' leading assist maker with four. His goals have been worth an additional five points for his team this term while his assists have been the difference in four extra points, the difference between finishing 11th or bottom of the table and suffering automatic relegation. Choi Yong-soo will be hoping that the 24-year-old has his shooting boots packed ahead of the trip to Daejeon this Wednesday. 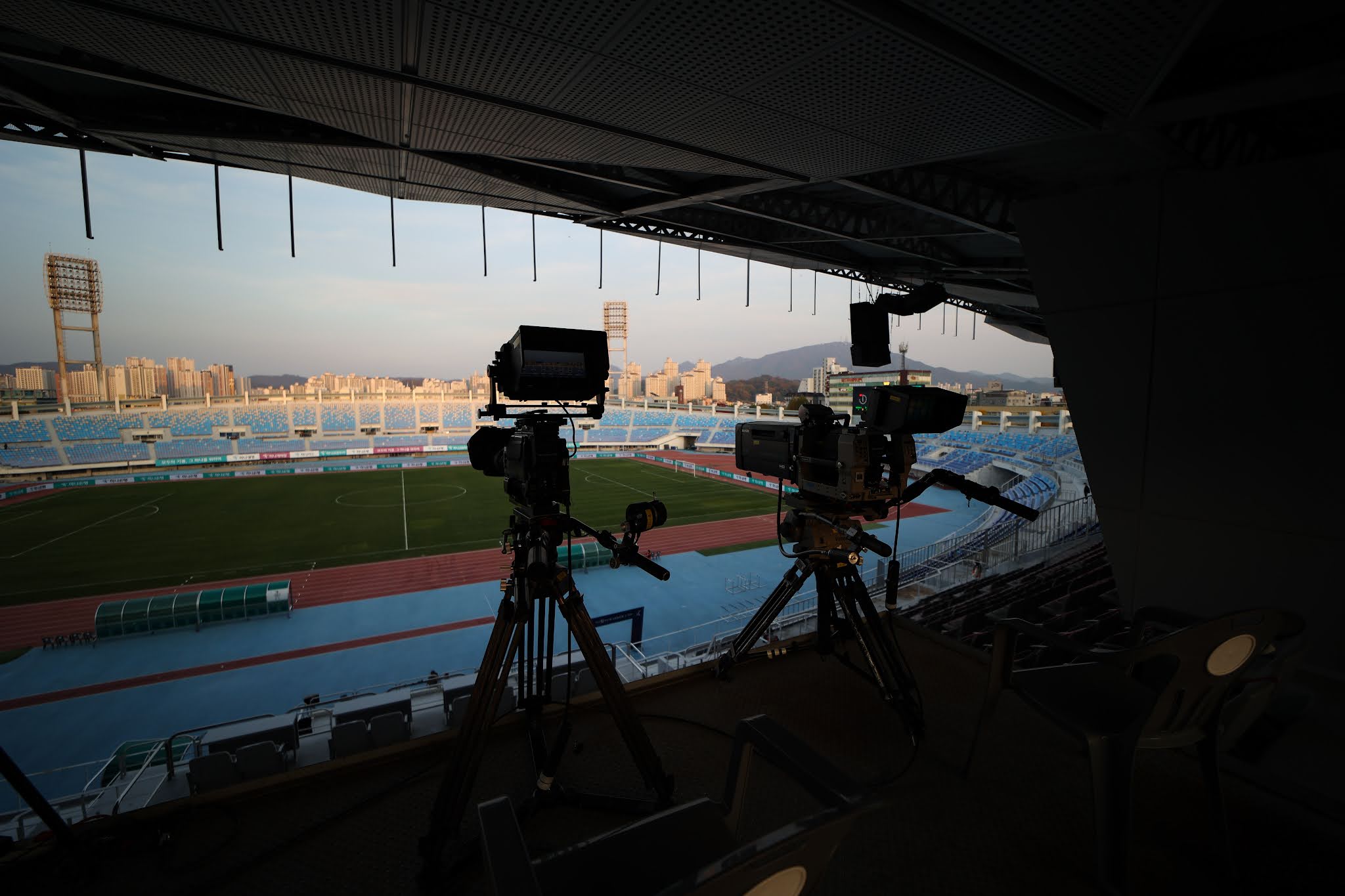