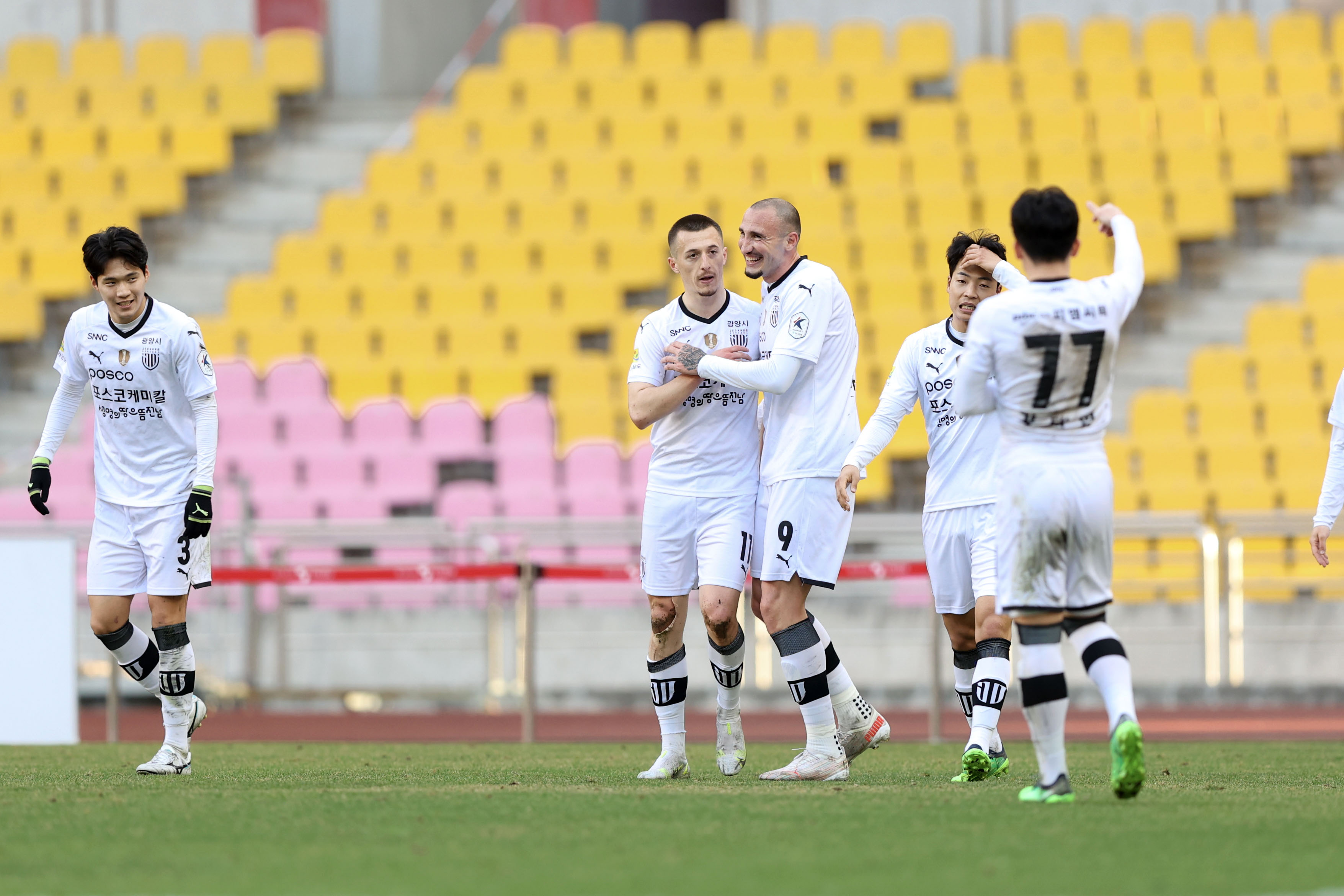 Jeonnam Dragons duo Nika Kacharava and Leonard Pllana say they are heading to the AFC Champions League Group Stage to finish top of Group G and to qualify for the knockouts. The pair sat down with Ryan Walters to talk about the life in K League and their thoughts ahead of ACL 2022.

Ryan Walters: I'm curious, did you guys get in touch before you got to the Dragons? Or was this just kind of a situation of when you showed up and you guys started hanging out?

Leonard Pllana: We just meet each other here in first day. We see each other so we started talking and we got this feeling you know, and now we have this feeling outside the pitch right now. Like we feel very good with each other. We talk, we drink coffee, you know. And now we just try to find each other in the pitch also and to help each other as much as we can."

RW: What would you say was the biggest difference that you've noticed so far between K League and other leagues you have played in

LP: To compare to Swedish League, here it's more like physical and you don't have so many space, you need to do more things to create your space because the defenders, they don't let you have so much space. So now I'm just trying to focus on that and I know that when I get my space, then I know what I'm doing. So this is this was the biggest difference because in Sweden, you have more space and the game is more faster, you know? But here also it's getting better and better for every day.

RW: I think expectations are this season to be in and around the playoff spots and challenging for the title. Nika, you scored the match-winner in the Round 4 match against Gyeongnam. First, did that feel like a significant moment, that goal? Could you feel that on the pitch that it was an important win for you guys?

NK: Yeah, this win was the first one. And before the game, we played 0-0 (vs Chungnam Asan) and we had so many chances, and we didn't score. So we needed just one win just to, again, to feel this confidence that we needed. So after it was easy, because we was playing good, even before we was playing good. But the result was not coming in. But we will show from the beginning that if we continue to play good the rest will come. We needed this win, to feel this feeling like confidence.

RW: For a lot of players, it takes a couple of months, but you guys seem to have really adjusted quickly and really hit the ground running. What's been the main reason that you've been able to find success so early?

LP: Since we came here, I know from the beginning it's going to be tough until we adapt but every time we talk with each other, and we just keep working hard in the training after the training, you know, every time focus, listen to the coaches, and we know that we are both good players, and when we get our chances to score goals and to help the team in everything. So we know that this is going to be better and better every time.

NK: For sure. We have a great team around us that makes our job easier. We have a great coaching staff, we have great teammates who are helping a lot. And yeah, when the team is performing well it's easy to use it to shine and easy to score the goals or make just finishing moves like I say so that's our job to do.

RW: How much did knowing that ACL was on the table factor into your decision to play for the Dragons this year?

NK: Of course, it's a big tournament and of course, it was a big factor that we joined the team and even from without this even for me it was like they had so much interest and so much trust in me that I was not thinking a lot. I just make the decision very quickly. But definitely, it had some factor.

LP: Yeah, same with me also. Jeonnam showed interest since December last year. And I had one more year contract in Sweden with my team, but Jeonnam want me here and they do everything to bring me here and of course, because the ACL, it's a very big factor also. And when I know the interest from Jeonnam I started watching the games from last year and more focus and I see that this team is a big team and they want to achieve something, you know. So when I see that, this year, we are going to play also in ACL and this interest, it was too much for me also. So I decided like 100%, to come here. And I'm very happy to be here because we have a very, very good team. And we can achieve good things this year.

RW: How are you feeling ahead of the trip to Thailand?

LP: I'm very, very looking forward to this. We train hard and we are prepared for this. But for me, it's the first time and I'm very, very excited. And I want to take this opportunity to go there to focus to train hard, work hard and help the team as much as I can. With everything, goals, assists, and the most important thing is just to win many games and to qualify for the next round.

NK: We didn't talk a lot about it because I think it's very different from what I experienced now because the previous Europa League, Conference League I played was not like now, we go in one place, we play like six games, and it will be finished. It was not like this, it's totally different, I think because of this factor it's like everything will finish in 20 days. So we have to be like focused on every game. And we have to give our best because there is no time that we can, we can recover some mistakes. So we have to make less possible mistakes and collect much more points that we can.

RW: You guys are in group G this year along with the Philippine champions, United City, the Thai champions, BG Pathum United, and the Australian champions Melbourne City. Do you feel that this puts Jeonnam in something of an underdog role going against so many domestic champions?

NK: No, I don't think so because we won the FA Cup last season. So we are winners too and we are champions. If they underestimate us, it's better for us on the pitch [if] they're highly mistaken.

RW: Leonard, the Dragons are coming in as a second division side. It's happened in ACL before but it is very rare. Is that something that you feel, puts less pressure on you guys as a team kind of coming in to that?

LP: Of course, people are going to think about this team, that they came from second league from K League but we know we trust each other we have good team. And we have good harmony inside the team. But I can only say that we are not going there to joke. We are going there to work hard and to show the people that we are good football players and Jeonnam is a big team you cannot joke about this. We're going to do good things that.

NK: I want to add also that only we put pressure on us because we know how good our team is and what we can achieve first together. So yeah, that doesn't mean nothing, that we are a second division because our team deserved to be in first league and we will show this in this year.

RW: There are a lot of big names, a lot of big teams. Is there anybody or any team in particular that you're really looking forward to facing?

NM: For me, no matter who will be against us, because we go in every game, we go just to win the game and go to the next round. This is our mindset going to Thailand and it will be like this all season.

LP: Yeah, I agree also with Nika, but I've actually looked for what if we qualify the group. You never know, maybe we're gonna play against Iniesta? You never know. That is big things, you cannot say that it's not a big thing to play against big player like Iniesta. So, I'm looking forward to it but as Nika say, we just got to focus on one game and you just got to work hard.

RW: Has there been any talk amongst the team in terms of goals going into this tournament, like knockout rounds or anything along those lines yet?

LP: As Nika say we are strikers. This is our job to help the team, to score goals to make assists. We want to score as many goals as we can and to go as far with the team.