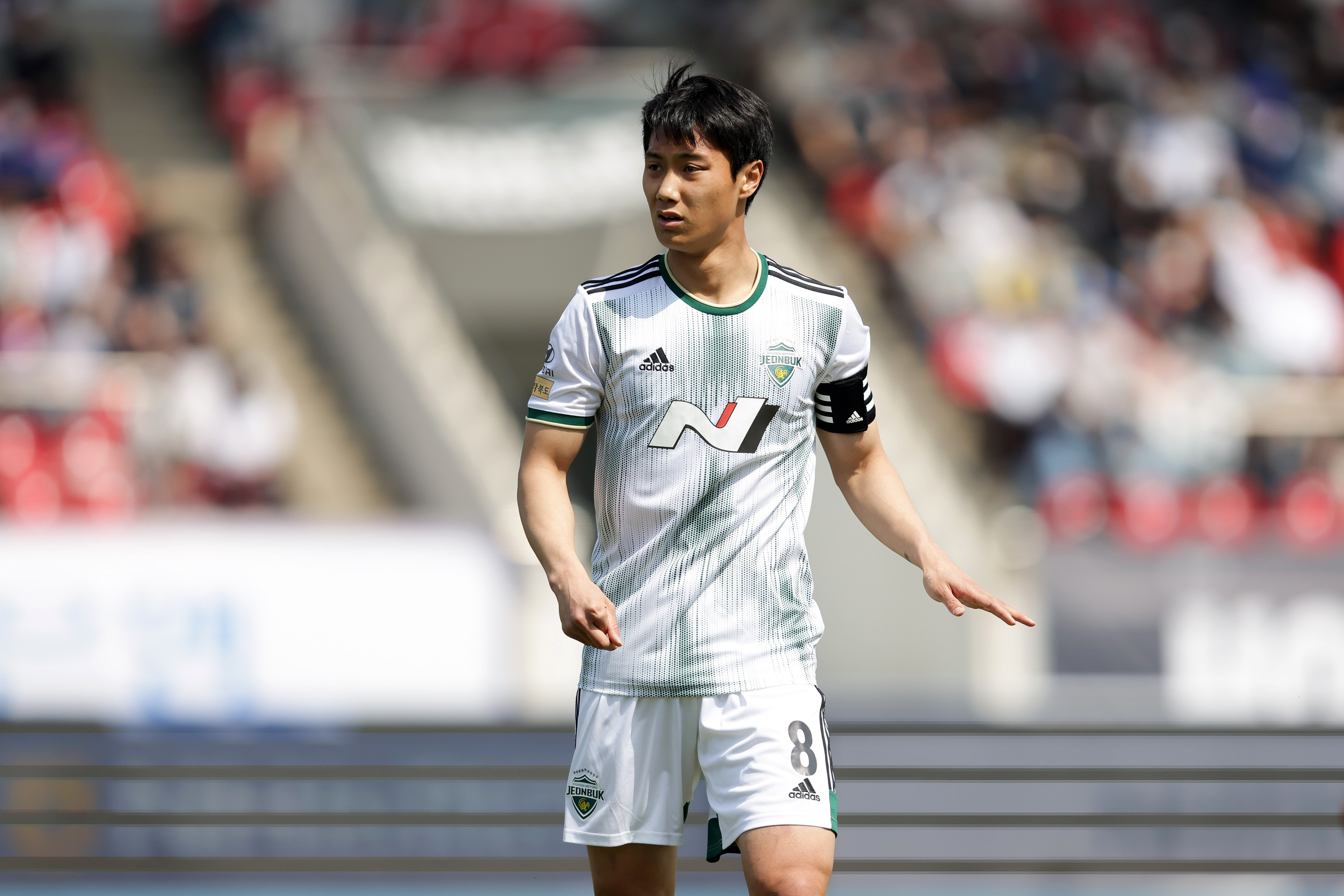 Having made the switch to K League at the start of last season, signing for the Champions Jeonbuk Hyundai Motors, Paik Seung-ho has become a regular fixture in Kim Sang-sik's starting eleven, featuring prominently in the team's successful title defence and named vice-captain for this campaign. Speaking on the eve of his side's first AFC Champions League group match, the Korean international sat down to answer a few questions about his side's chances and his time at the club so far.
Congratulations on being announced as Jeonbuk’s vice-captain for the season and for also captaining your first match for the club against Seongnam. What was that conversation like with manager Kim Sang-sik when he told you that you would be vice-captain and were you surprised?
Well, there was talk of me becoming the vice-captain, but I didn’t know that I would actually be taking charge! During a meeting at the start of the season, the manager told us who would be the captain and vice-captain and to come forward and say a few words, so I thought I should take the role responsibly. I never thought that I would come to the professional stage and take the position of vice-captain, but it is such an honour and it seems to be a position that makes me more responsible. It was an honour to play against Seongnam wearing the armband, but at the same time, I felt that it was never easy to wear.
What areas of your game do you feel you’ve improved the most since joining Jeonbuk?

It’s the first time I’ve played consistently like this on the professional stage, but I think I have improved a lot in my physicality and match sharpness as well as in my understanding of the game. As I play more, I come across similar situations a lot on the pitch where you need to be quick to adapt and react and I think I have developed a lot in terms of coping with those situations and controlling match tempo.
What was your favourite personal highlight from your first year at the club?
I think Iljutcenko scoring that goal against Ulsan was the happiest and most memorable moment. It was a very important game and a very important goal which we were desperate to pull off. It was such a memorable scene with the stoppage-time winner. 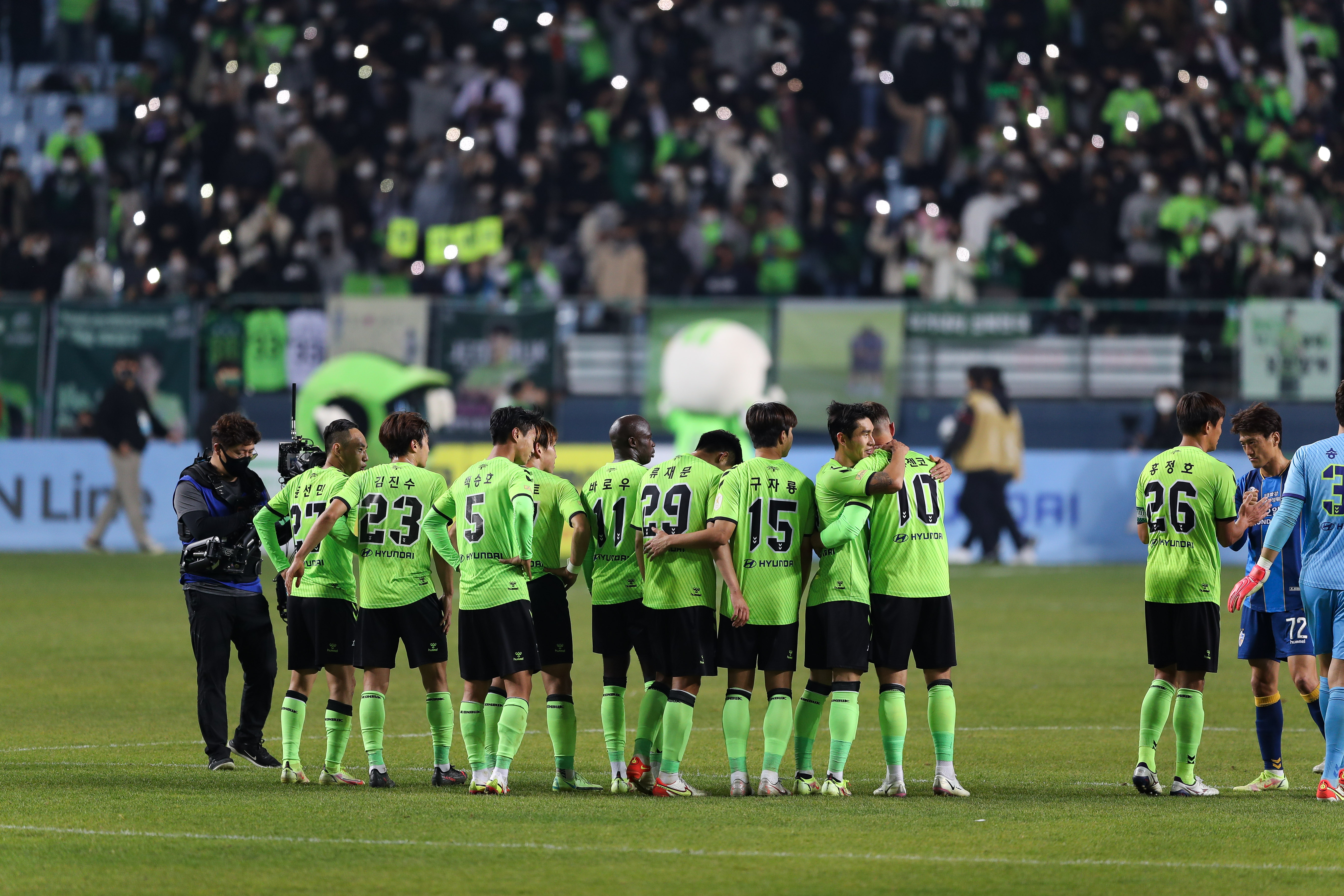 This is both your second year in the AFC Champions League and K League. How do the competitions compare to each other and what lessons have you learnt in your approach to them?
Firstly, we are going to meet teams from Australia, Japan and Vietnam in the ACL this year and the players from other countries have different physicalities and styles of playing, so I think the preparation process is a little different. For instance, when we play against Sydney, they are a very physical and powerful team, so we need to be mentally prepared before we go.
Of course, the K League games also require a lot of preparation, but we all know other teams relatively well as we play them regularly, although the transferred players need to adjust to the preparation process. For example, I am also in my second year in the K League and these are the teams I played last year. I prepare for the league games based on my previous experiences by looking back at what went well and wrong. I think it's a little different in that regard.
I mean, in the ACL, there are teams that I haven't played before, but in the league, there are teams that I've played before. Thus, things may change in the league because of the new season, the new format, and the new players, but we are quite used to playing other teams in the league and I think that's a little difference between the two competitions.
This year’s AFC Champions League will be in a ‘bubble’ like last year’s competition, with each group hosted in one country and played over the span of a couple of weeks. As a player, what are the biggest challenges of training and playing in such an environment? And are there any benefits?
First off, I don't know much about the advantages. The big advantage, it seems, is to be able to do it in one place. When it comes to disadvantages, I would say that we are Koreans, so the food, weather, stadium, etc. lawn management status and lawn style are all different. If you play in other countries, you can say that adapting to the grass is a bit of a disadvantage. Also, if you do it at home, you will have that kind of comfort, but it's hard to play six games overseas.
Last year, the summer group stages saw Jeonbuk win five and draw one, which perhaps helped build momentum for the second half of the season. Do you think this year's group stages could also serve the same purpose?

Of course, we are preparing for better results than last year, and it would be great if we could win six this year, but I think we need to prepare well from the first game and get on the right foot. We need to first focus on Sydney and prepare well, win and then prepare well for the next game, the next game and every game, so that we can have good results and continue the influence in the league like last year. 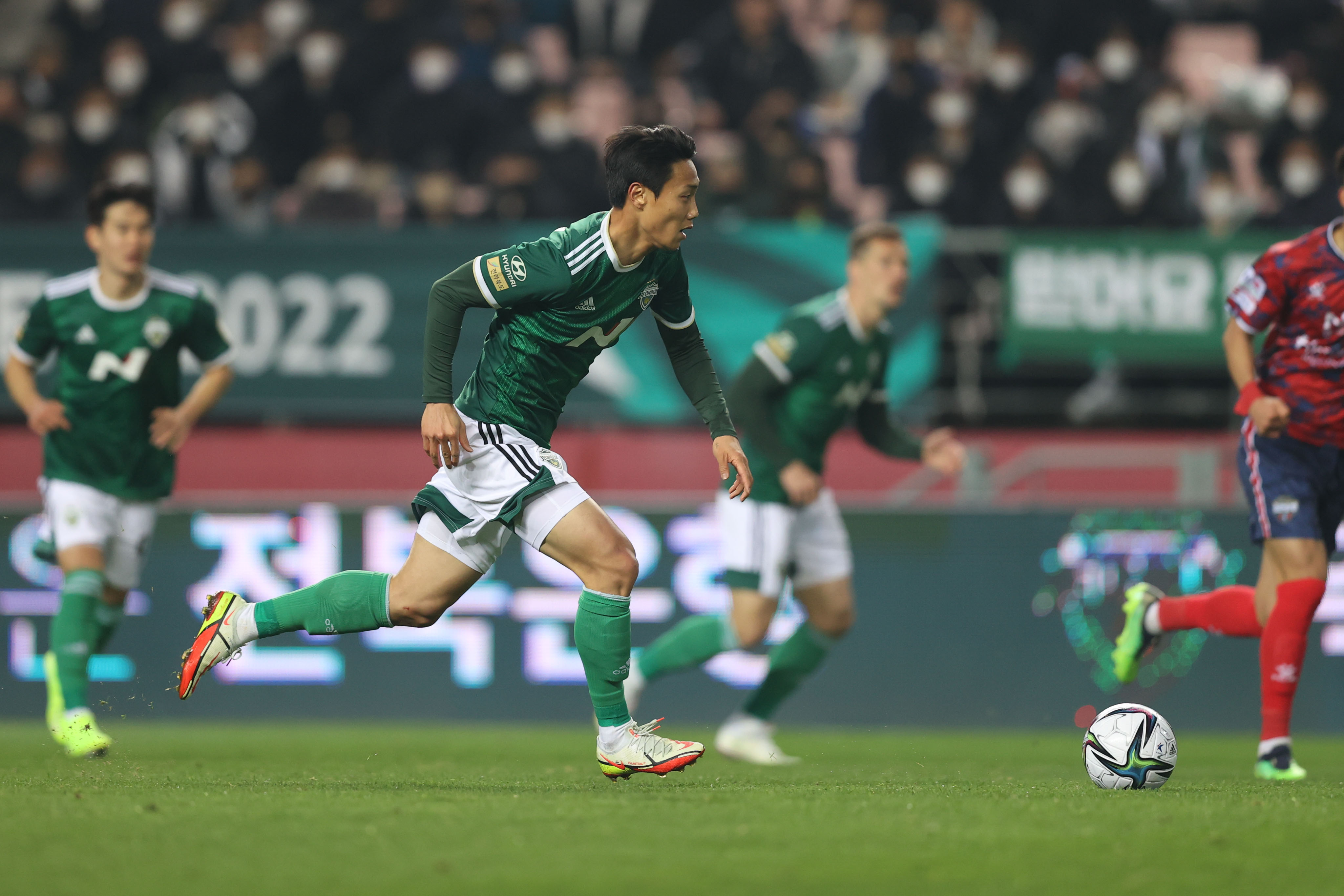 Jeonbuk start the group stages off against Sydney FC on Saturday evening. How important is it to set the tone with a victory in the opening match?
Well, I think that winning the first match and doing up the first button well has a big impact on whether the atmosphere is very good or bad in the dressing room, however, it’s not necessarily always true. When watching previous World Cups, Spain still won the trophy despite losing its first game [2010]. Thus, I guess it's different for each team. Personally, I believe the first match in the group stage is really important because we meet each team twice in the group stage and we need to win the first meeting in order to continue the good atmosphere into the reverse game. Also, by winning the first game against Sydney, we can keep this momentum alive for the next game against Yokohama and the next game.
Yokohama F. Marinos are perhaps the strongest opponent in the group, with them currently 2nd in the J. League. With the team having lost to them twice two years ago, do you think Jeonbuk have a point to prove against them?
Of course, I think we can overcome it if we prepare well. I watched the game when I was abroad, and I remembered it. When I heard we'd be in the same group this year I thought, if we prepare well this time, we can win as Jeonbuk has a lot of good players and we're the best team in Asia.
This year Jeonbuk will also face Vietnam side Hoang Anh Gia Lai who enter this competition for the first time since 2005. How aware are you of the threat they pose and is home nation advantage going to be a concern?

Of course, I'm worried. We get stronger when we play at home and the fans support us. I think it's very helpful in that respect, but personally, since we’re playing in Vietnam, the grass condition and the weather are all tailored to their players, so we have to adapt quickly, but it's the third game, so we will have played our first and second games. I think that we have to adapt quickly so that we can bring good results in the third game. I have a feeling that it will not be an easy match.
Back to the K League, Jeonbuk are behind Ulsan at the moment but it is still early in the season. Last year, Jeonbuk were able to fight back once more to win the title. What is it that has given Jeonbuk the advantage each year and can they do it again this time?

Last year we had a very similar situation in the middle, but there was a pretty big difference in points back then. Back then, I thought it might not be easy but I found it's not like that for senior players or players who have been in Jeonbuk for a long time. If you look at their mindset and preparation, they, incredibly, looked calm and cool as normal, believing that good results will come to us as long as we don’t give up but remain focused on our own preparation and our games. In that regard, I think it’s the club’s DNA that played part in last season’s success. Overall, senior players and the players who have been around for a long time at the club led the team well, remaining calm in those difficult times. 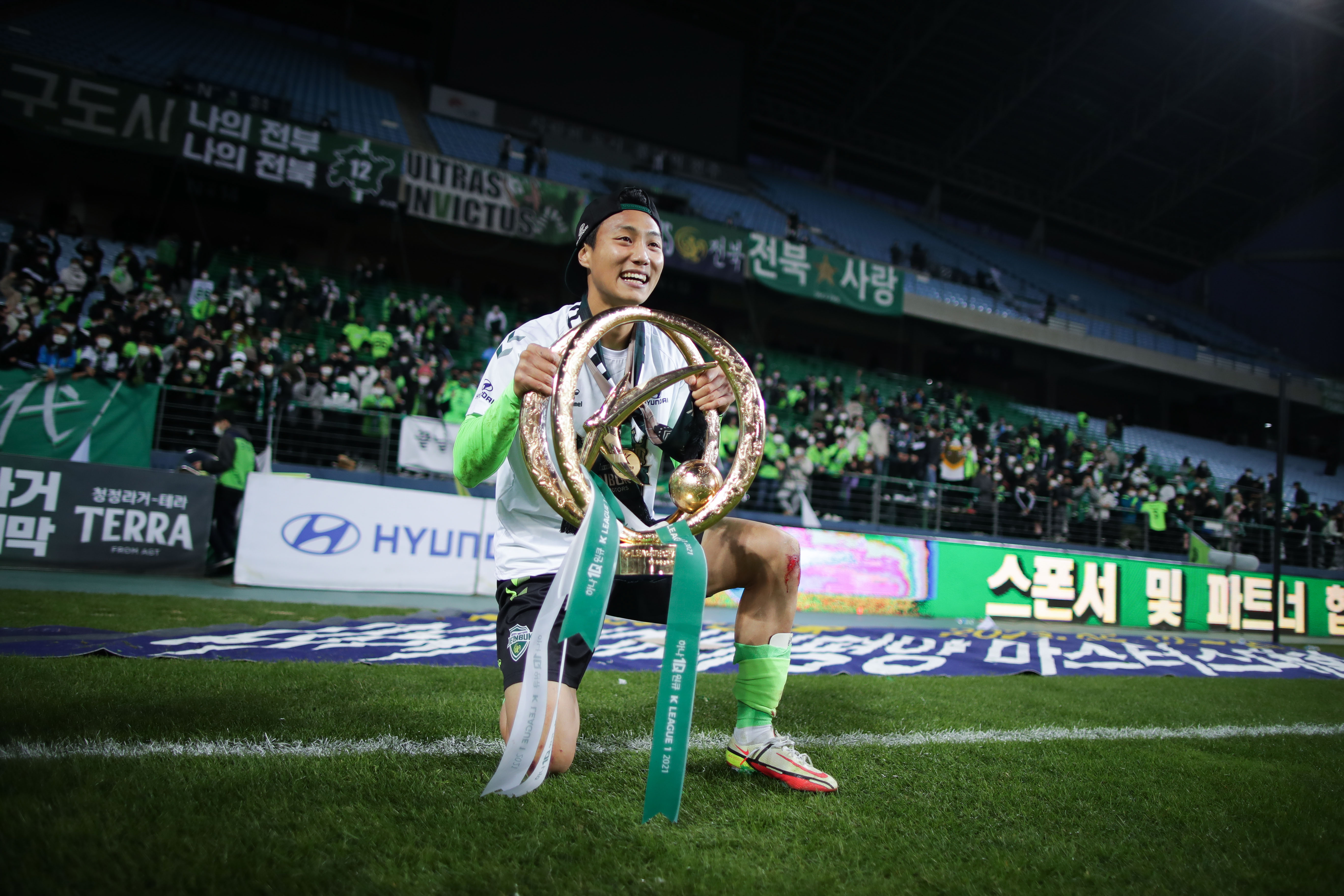 What are your personal goals for this season?
I've been thinking a lot about this season, but my personal goal is to get more assists and more attack points than last year, and I think my goal is to also help the team in every game.
Finally, how far do you see Jeonbuk going in the AFC Champions League this year?
We want to win because we are a team that can win, and we want to show better results than last year. Unfortunately, we were eliminated in the quarterfinals last year, so this year, I want to prepare better and get better results in the ACL.
By Matthew Binns & Jung Muyeol (K League United)
Transcribed by Choi Sunyoung
다음 글 2022 Hana 1Q K League 2 Round 12 Preview
이전 글 K League in ACL 2022 Match Day 3 Preview
K LEAGUE