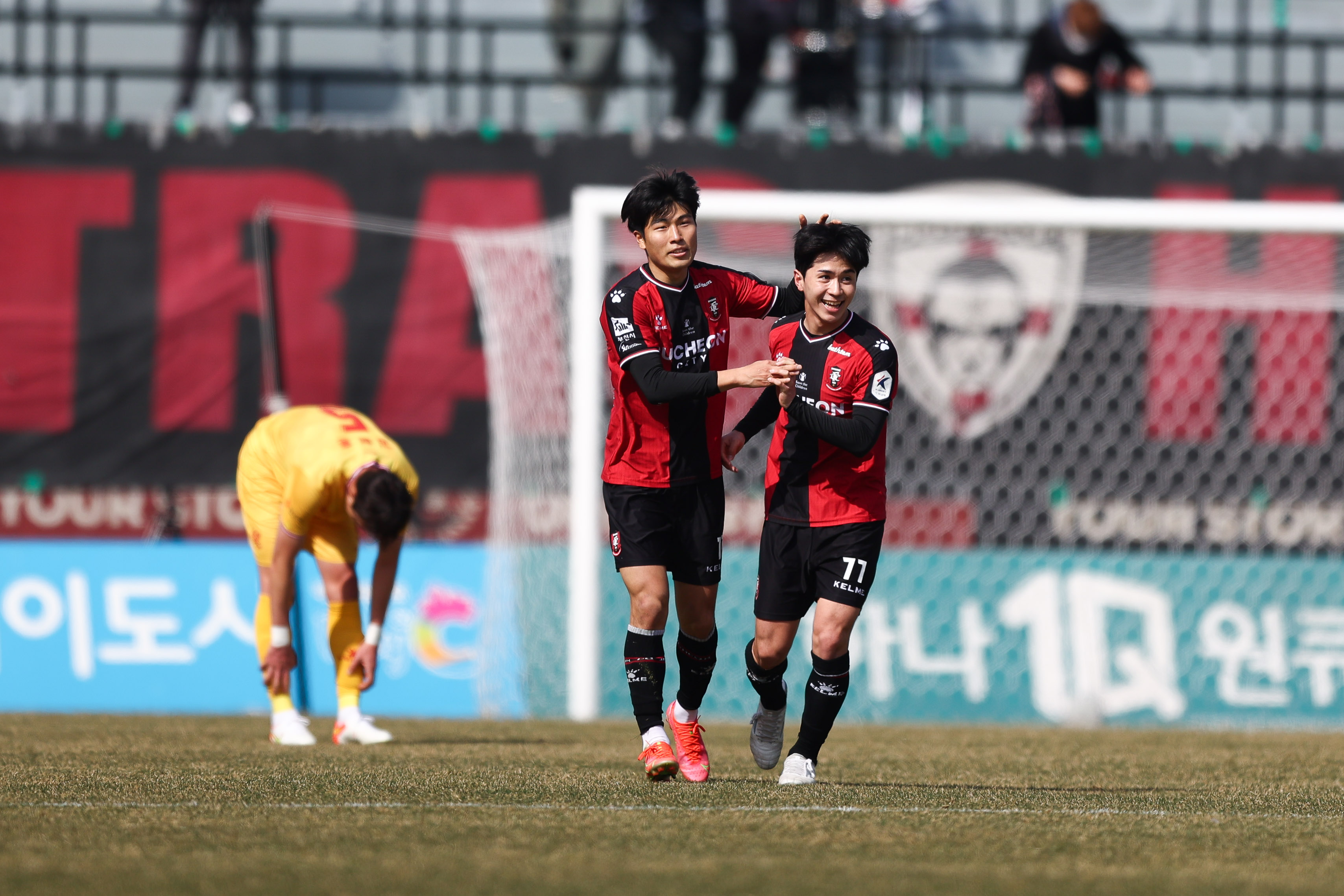 The top two sides in the division go head to head this weekend when Gwangju FC host Bucheon FC 1995 with just a point between them at the top of the standings. Daejeon Hana Citizen have won three in a row to climb to fourth in the table and will look to continue their fine form when they travel to meet Ansan Greeners, who have yet to win this season. Chungnam Asan's Yoo Kang-hyun had a breakout match against Gimpo FC, the Owls' opponent this weekend. Asan are winless in their past three matches and would like to get back to winning ways. 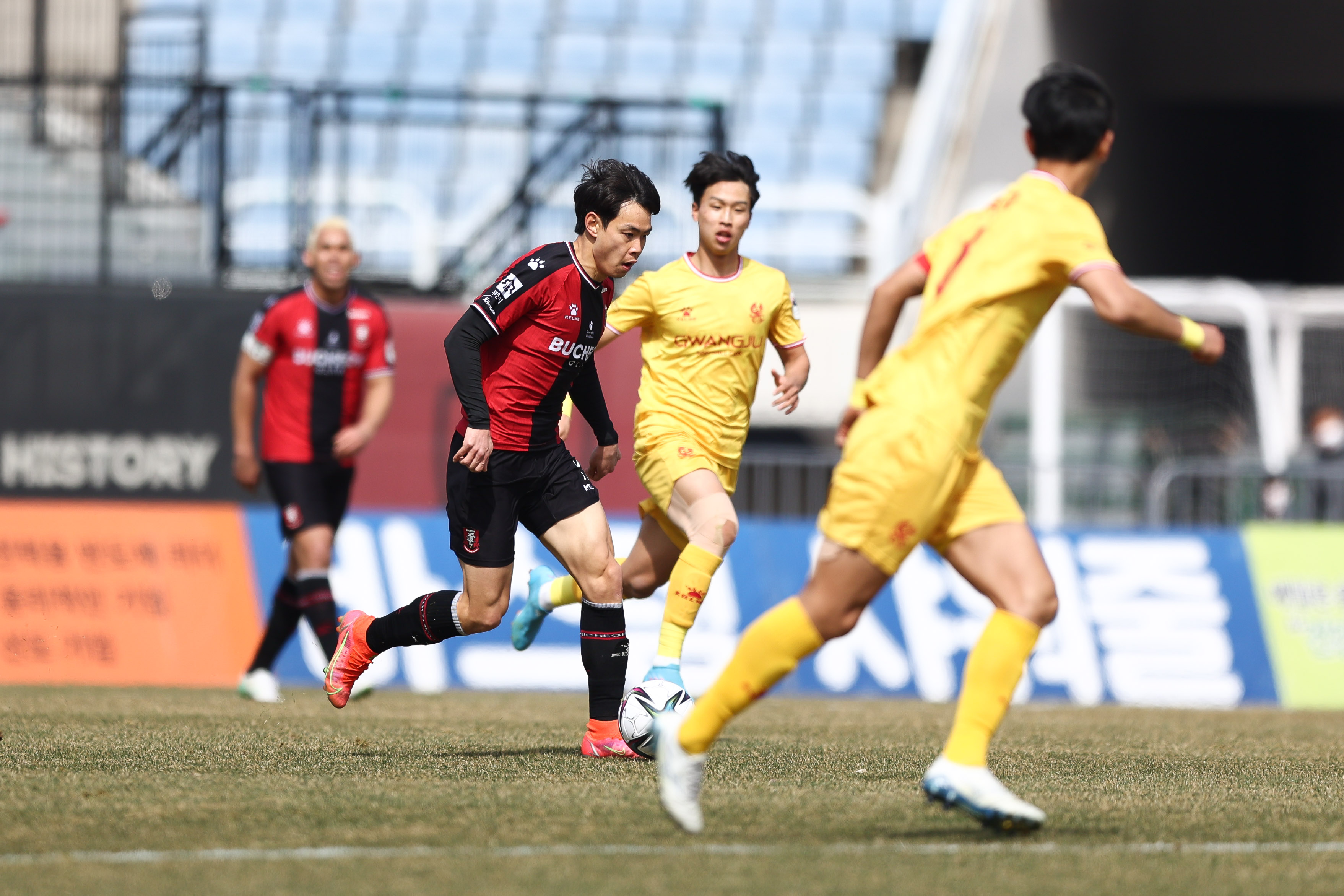 It is no surprise that Gwangju FC find themselves in the thick of the title hunt following their relegation from the first division after last season. It was widely thought amongst league observers that they would have a good chance of going back up right away and with a quarter of the season gone, they have put themselves in a position to do just that. They had to settle for a draw against FC Anyang last time out, but know that a good result against Bucheon could help them build momentum towards creating separation from the rest of the pack as they have a very favorable schedule in May, where they will face Gimpo FC away, then Seoul E-Land and Ansan Greeners at home, followed by away matches against Gyeongnam FC and Busan IPark. If they can roll together a string of results, they may be difficult to catch once the campaign enters the summer.
Bucheon FC 1995 are currently unbeaten in their past five matches, four of them wins, including a 3-2 success over Gyeongnam FC last time out. Jorman Aguilar netted the winner in the second minute of injury time after Kim Ho-nam and Samuel Nnamani had scored the earlier goals. Tiago Orobó scored a brace for the Reds. The first time the sides met this year, it was a 2-0 victory for Bucheon, with Kim Kyu-min and Park Chang-jun providing the offensive spark. The Yellows still have the upper hand in the head-to-head, winning seven times in the series to Bucheon's three, while four matches have ended in a draw.
[READ: "My goal is for Seoul E-Land to be promoted" - Kim In-sung] 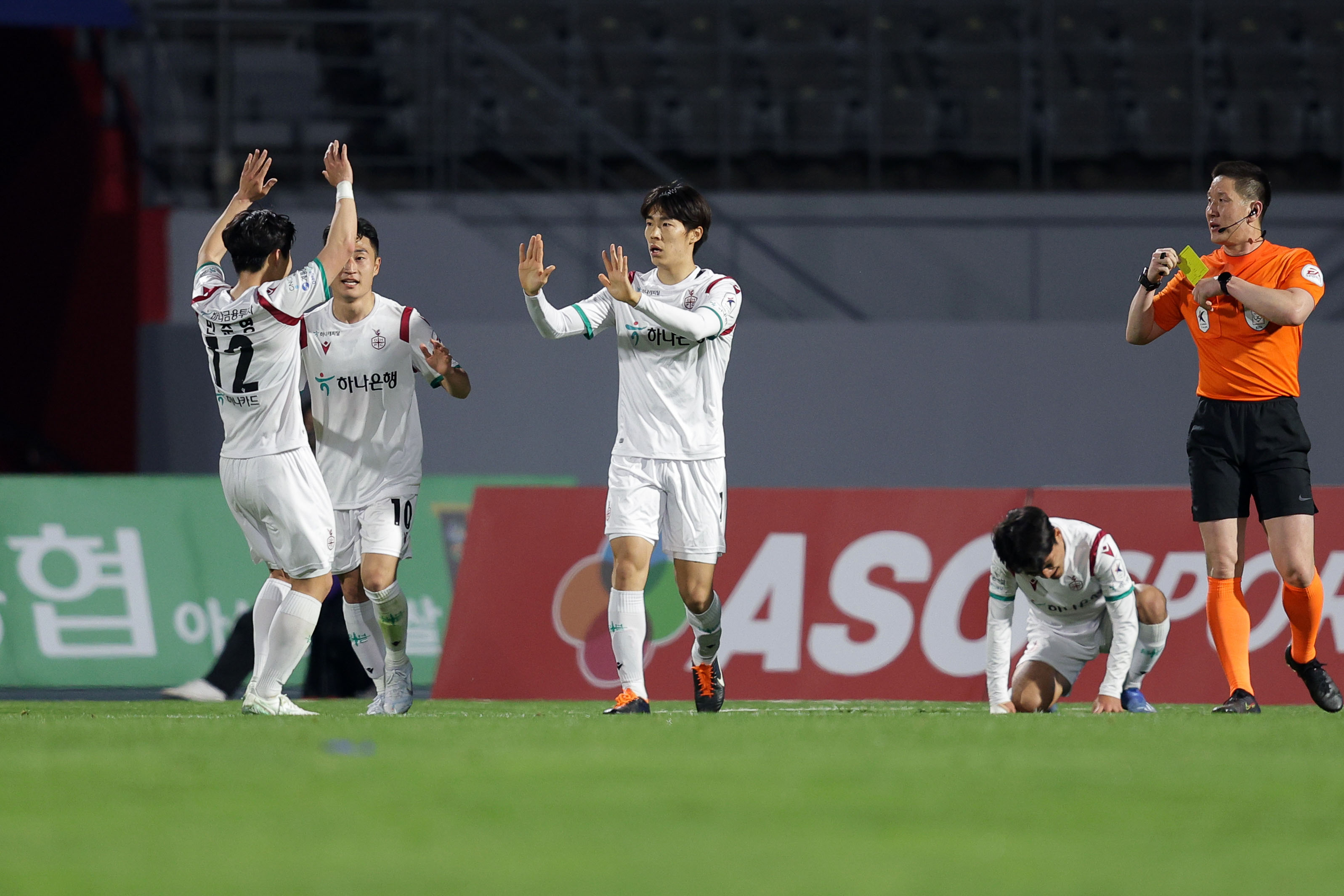 Daejeon Hana Citizen have finally found some consistency this year, rolling off wins in each of their past three matches, including last round's emphatic 3-0 triumph over rivals Chungnam Asan in the first Chungcheong Derby in 2022. There is an air of expectancy this year with the club failing to win promotion last year following the big-money takeover by Hana Financial Group, but a plethora of signings in the off-season are finally starting to gel together and this will be a team to watch as the season progresses.
Masatoshi Ishida continues his fine form this year with five goals in the league, while others like Cho Yu-min, Leandro Ribeiro, and Kim In-gyun have all made valuable contributions as well. As a team, the Purples have scored fifteen goals this year; only Gyeongnam FC have scored more. Ansan have only conceded twelve goals, so could be tough to crack, but their lack of offensive capability (or realization in front of goal) could be enough to spurn Daejeon forward in an attempt to end matters early. Lim Deok-geun will be unavailable for the next two matches for the team after picking up a straight red card against Chungnam Asan. 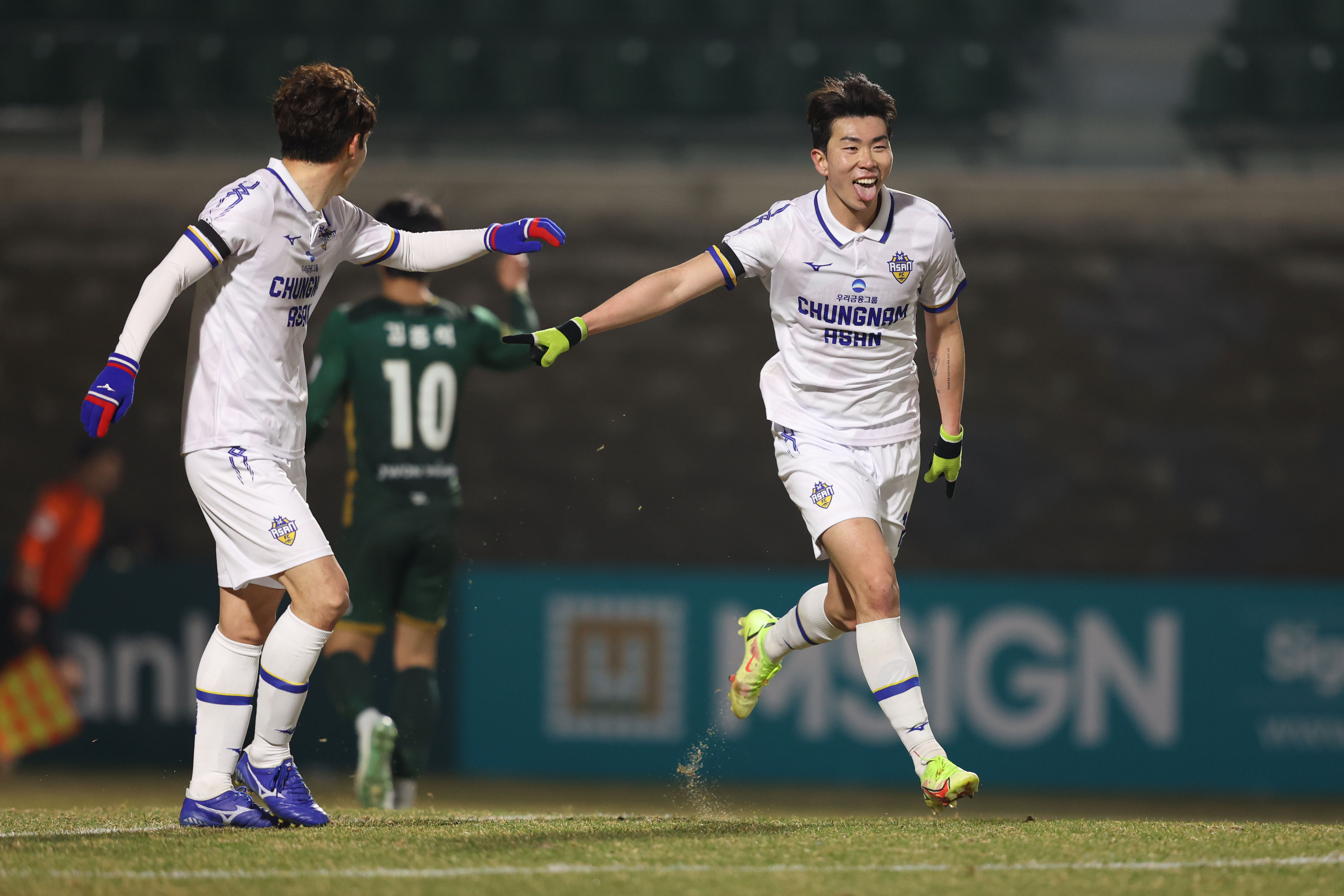 Yoo Kang-hyun was played only as a substitute against Daejeon Hana Citizen on Monday night, so he should be fresh and ready to go when the Owls get set to meet Gimpo FC for the second time this season on Sunday night. In the first meeting, Yoo had his best performance as a professional, scoring the first two goals of his career, while adding two assists in the process in a 5-0 romp.
With the team struggling a bit of late, and with Yoo have scored once since then, this match would serve a twofold purpose, in getting Asan back in the win column, and Yoo back among the goals, with his last marker coming against Busan IPark in a 1-0 win at the beginning of the month. Asan will be looking for their second victory of the season at home and Yoo could be a big part of it if he is able to take his chances well.

Elsewhere in K League 2 Round 12

In the other matches in Round 12, Gyeongnam FC host Seoul E-Land, with both teams seemingly going in opposite directions right now. The Reds have allowed more goals than any other side (22) thus far this year but are also capable of scoring a few themselves. The Leopards snatched three points against Busan IPark, and would love to carry that momentum this weekend as they look to state their case to be in the playoff picture.
Busan IPark host FC Anyang in the remaining match. They are now anchored at the foot of the table having still just one win to show for their efforts in 2022. FC Anyang need a win to restore some confidence after slipping up against division contenders Gwangju FC and Bucheon FC 1995 over consecutive rounds, now five points off the summit and in fourth place on goal differential. 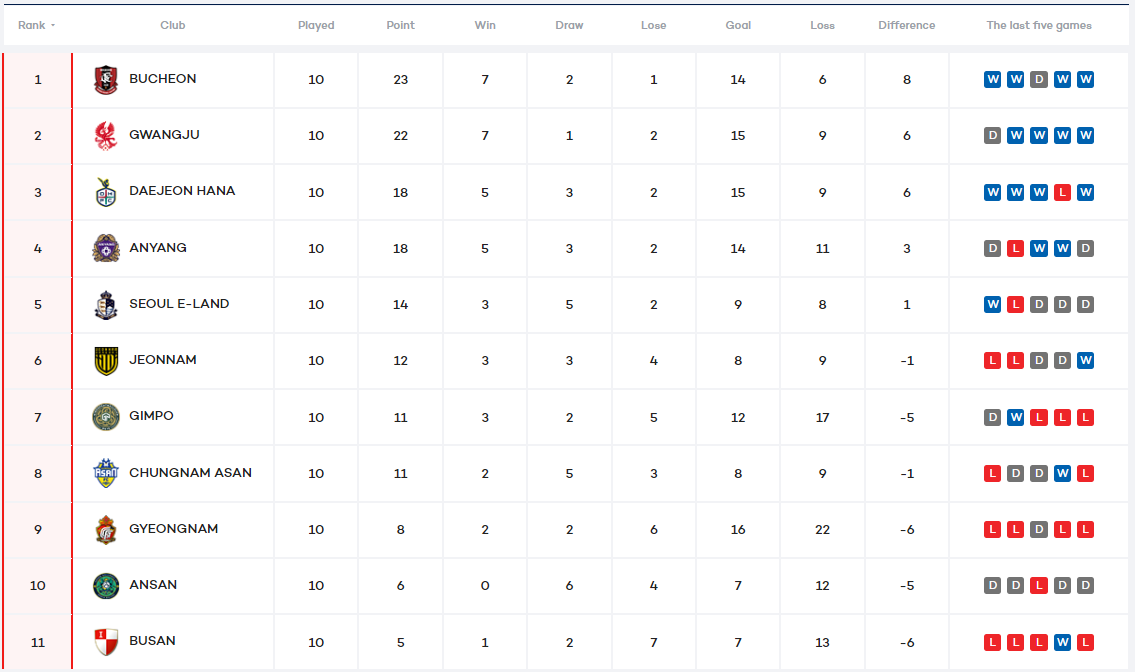