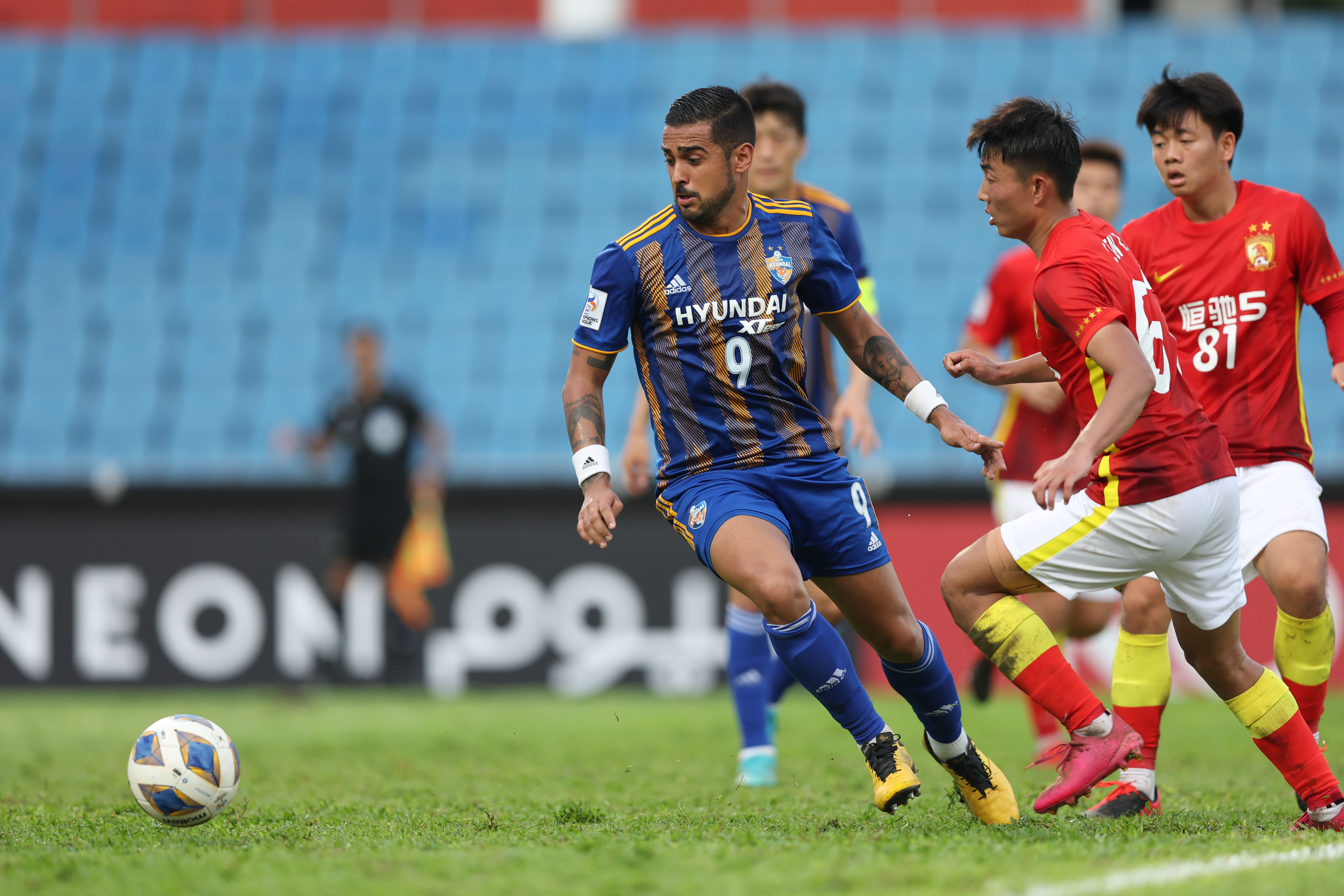 Ulsan Hyundai and Daegu FC bounced back from losses on Matchday Two, recording victories against Guangzhou FC and Urawa Red Diamonds, respectively, while Jeonnam Dragons, despite fighting hard, fell to their second defeat in the group phase against debutants Melbourne City. Jeonbuk Hyundai Motors left it late to defeat a resolute Hoang Ahn Gia Lai. The fourth round of matches sees the reverse fixtures between the same sides from the last round. Which Korean clubs will position themselves for a place in the knockout phase? 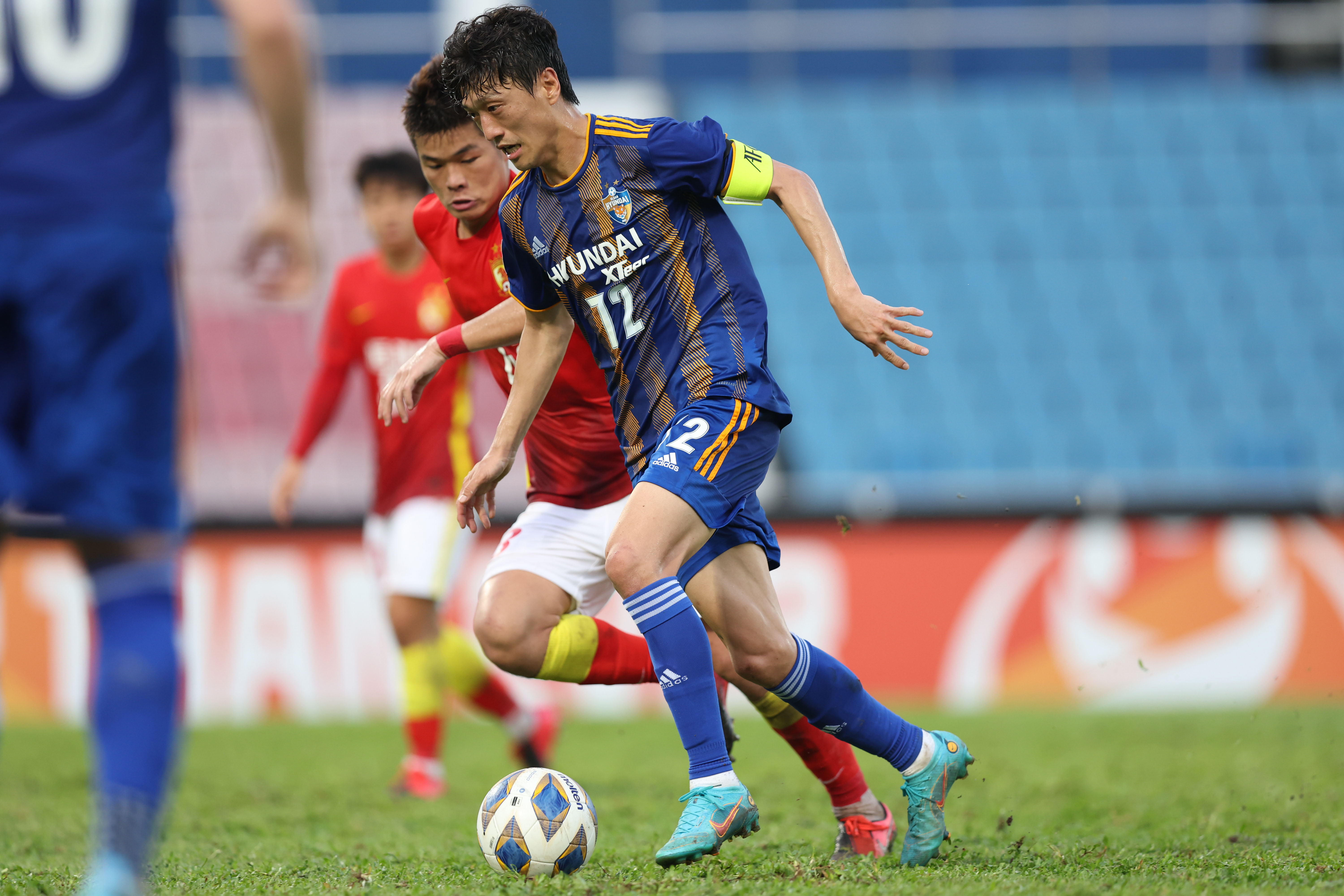 Ulsan Hyundai picked up their first win of this year's competition last time out, but it took some doing. Despite having a distinct statistical advantage in the first half, where they produced sixteen total shots, the overall display was rather underwhelming, as they could only muster a single goal for their efforts. That single goal, however, was one for the highlight reel, as Márk Koszta dipped a nicely placed free-kick past the Chinese wall and goalkeeper Lipan He just before the half-hour mark. Too often, however, possession was conceded in attacking areas as Hong Myung-bo's men could not find a breakthrough in open play.
The second half proved to be better for the 2020 champions, as Park Chu-young and Yun Il-lok both found the back of the net in a space of eleven minutes to seal what was in the end a routine victory for the 2020 champions. The second half was their best display of football at the tournament but they are still a ways off from having hit their best form. While they are expected to get the victory, it is still a pivotal match for them in terms of gaining momentum ahead of their final two group matches against Kawasaki Frontale and Johor Darul Ta'zim.
[READ: "Another season, another chance" Vako Qazaishvili] 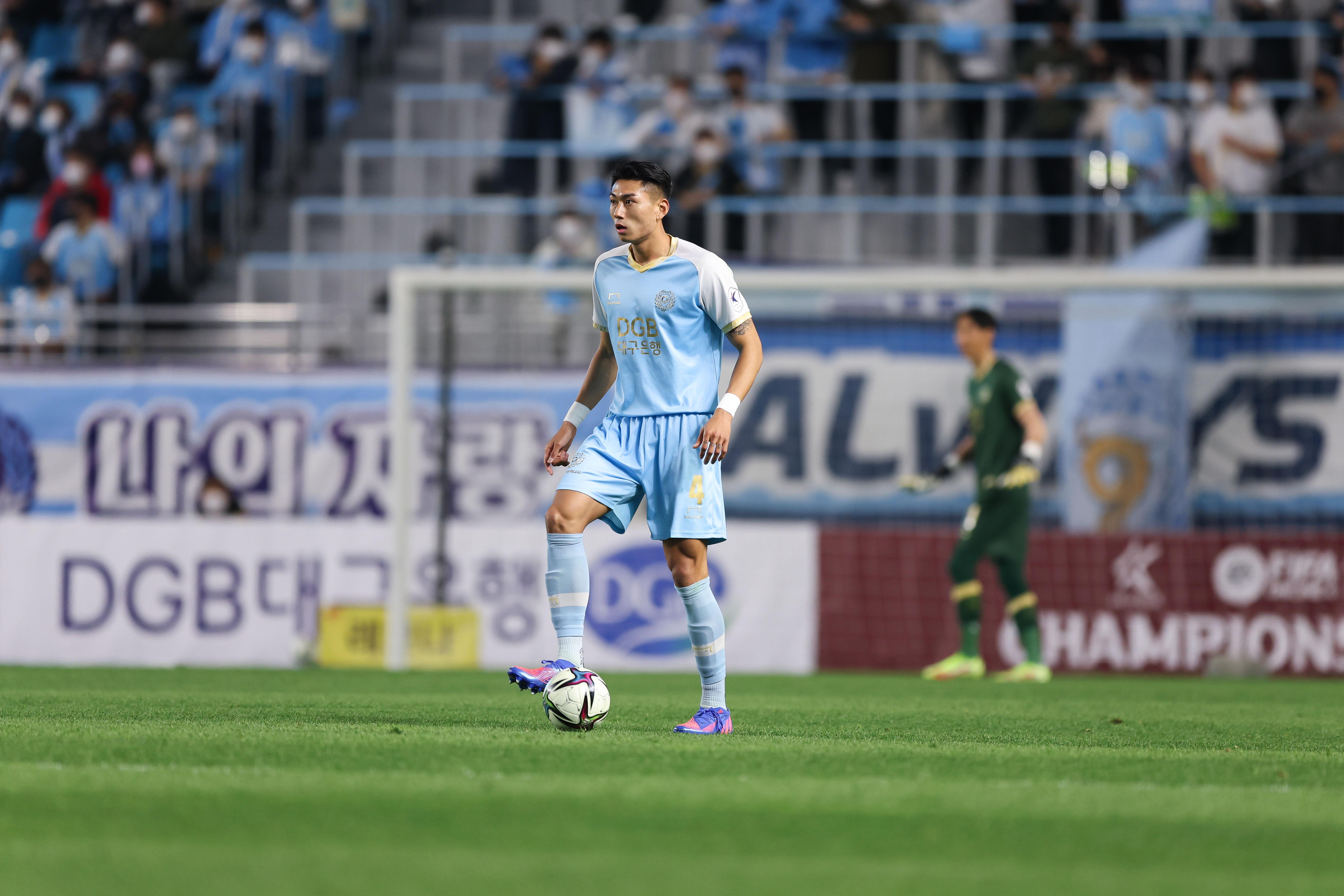 Daegu FC bounced back from a poor performance against Lion City Sailors on Matchday Two to record a 1-0 victory over two-time champions Urawa Red Diamonds, who have struggled on the domestic front this year, as they currently sit tenth in the J1 League, ten points behind leaders Kawasaki Frontale after the first ten rounds of the season. Zeca scored the only goal of the match in the 53rd minute, nodding home confidently from Keita Suzuki's cross from the left, his fourth of the competition.
While Urawa dominated in possession for the majority of the match, it was the Sky Blues who had the better chances throughout. If they are to seal back-to-back victories against the Japanese outfit, they will have to improve on their passing, as their overall accuracy was very low at just 60 percent. The return of Jeong Tae-wook solidified the back line, and Oh Seung-hoon was in the right place at the right time late to deny an equalizer to ensure that Daegu would earn their first-ever win over Japanese opposition on the continental stage. Should they be able to do it again, it could put their foot in the door for the Round of 16. Hong Chul is still out through suspension for the straight red card he received in the match against Lion City Sailors, while Cesinha is still a doubt to play.
[READ: "In ACL the goal is to be champion, we are no different" - Cesinha] 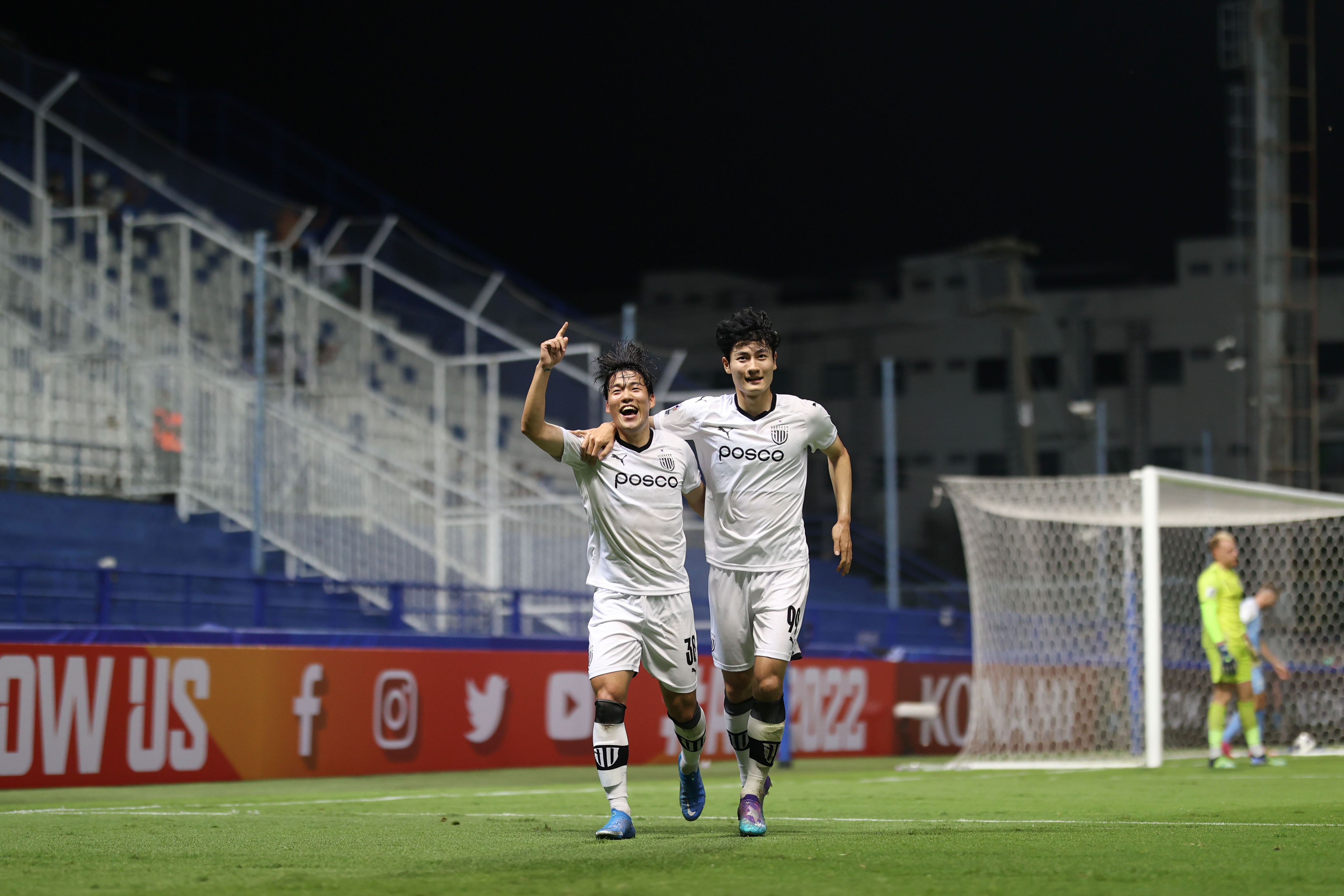 After opening their ACL campaign with a win over United City, Jeonnam Dragons head into the fourth round of matches off of consecutive losses. The first encounter with Melbourne City was a hard-fought affair, with Carl Jenkinson and Lee Kyu-hyuk trading goals within minutes of each other, but Andrew Nabbout's goal in the 22nd minute would prove to be the winner. He dribbled into the area almost untouched thanks to some suspect defending and his effort on goal took a deflection on the way into the back of the net.
Kim Tae-hyun could have drawn his side level just past the half-hour mark, but Thomas Glover palmed his effort over the bar. There were chances for the Korean side to equalize in the second half as well, but Glover was equal to the task. The Australian side now has two wins and a draw from their first three matches and are equal on points with BG Pathum in Group G. Jeonnam on the other hand understand that this could be their last chance to stay in contention for a spot in the competition going forward, but their lack of finishing is an issue which must be resolved. With that in mind, it begs the question of who Jeon Kyung-jun will start up top - will it be Leonard Pllana, who scored in Jeonnam's opening match win, or Nika Kacharava, who started last time out? The choice could have a critical impact on the outcome at the final whistle.
[READ: "We are going there to take first spot": Nika Kacharava & Leonard Pllana] 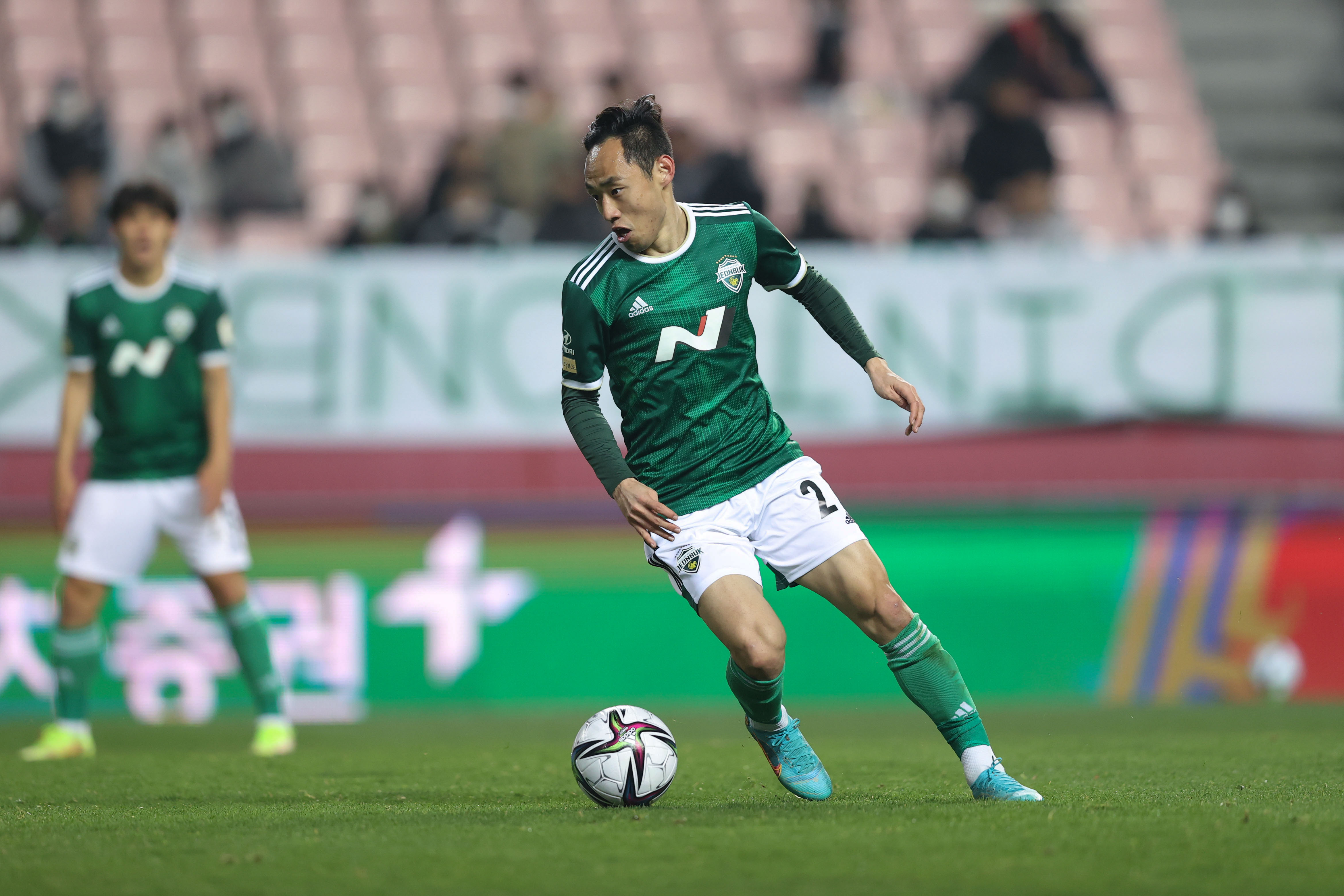 Jeonbuk controlled the first half and had their chances to score, but the Vietnamese outfit kept them out for the first forty-five minutes. The Korean side had to make a switch after just twenty minutes when Song Min-kyu was taken off the pitch with what looked like a serious shoulder injury. He will likely be out for the match on Monday and will be evaluated in the days leading up to the Matchday Five fixture next Thursday against Sydney FC. Stanislav Iljutcenko came on to replace him. The five-time defending Korean champions continued to turn the screw as the half wore on to its conclusion but they could not find a way through, with Modou Barrow only able to create a few inconclusive chances in front of goal.
The second half followed the same script for the most part, but Hoang did have a good spell of pressure and could have had a look at goal with just under twenty minutes to play, but placed one pass too many and were unable to fashion a meaningful chance. The hosts suffered a blow with under five minutes to play when their star forward Washington Brandão had to exit the pitch due to injury. The severity of his condition is not yet known, but if he is unable to play in the reverse fixture it will be a handicap for the Group H hosts.
Tempers flared in the late stages of the match when Iljutcenko was shown a yellow card for a rash challenge on Hữu Phước Lê, but the drama would not end there as Moon Seon-min would snatch a late winner for Jeonbuk, as he controlled well from a headed clearance following Kim Jin-su's lofted ball into the area and rocketed his effort into the top of the net. With the win, the Green Crusaders remain unbeaten and could put themselves closer to booking their place in the next round with a win on Monday.
[READ: "We're the best team in Asia." - Paik Seung-ho]
Branko Belan
K League United Senior Columnist
다음 글 K League in ACL 2022 Matchday 5 Preview
이전 글 "We're the best team in Asia." - Jeonbuk Hyundai Motors' Paik Seung-ho
K LEAGUE