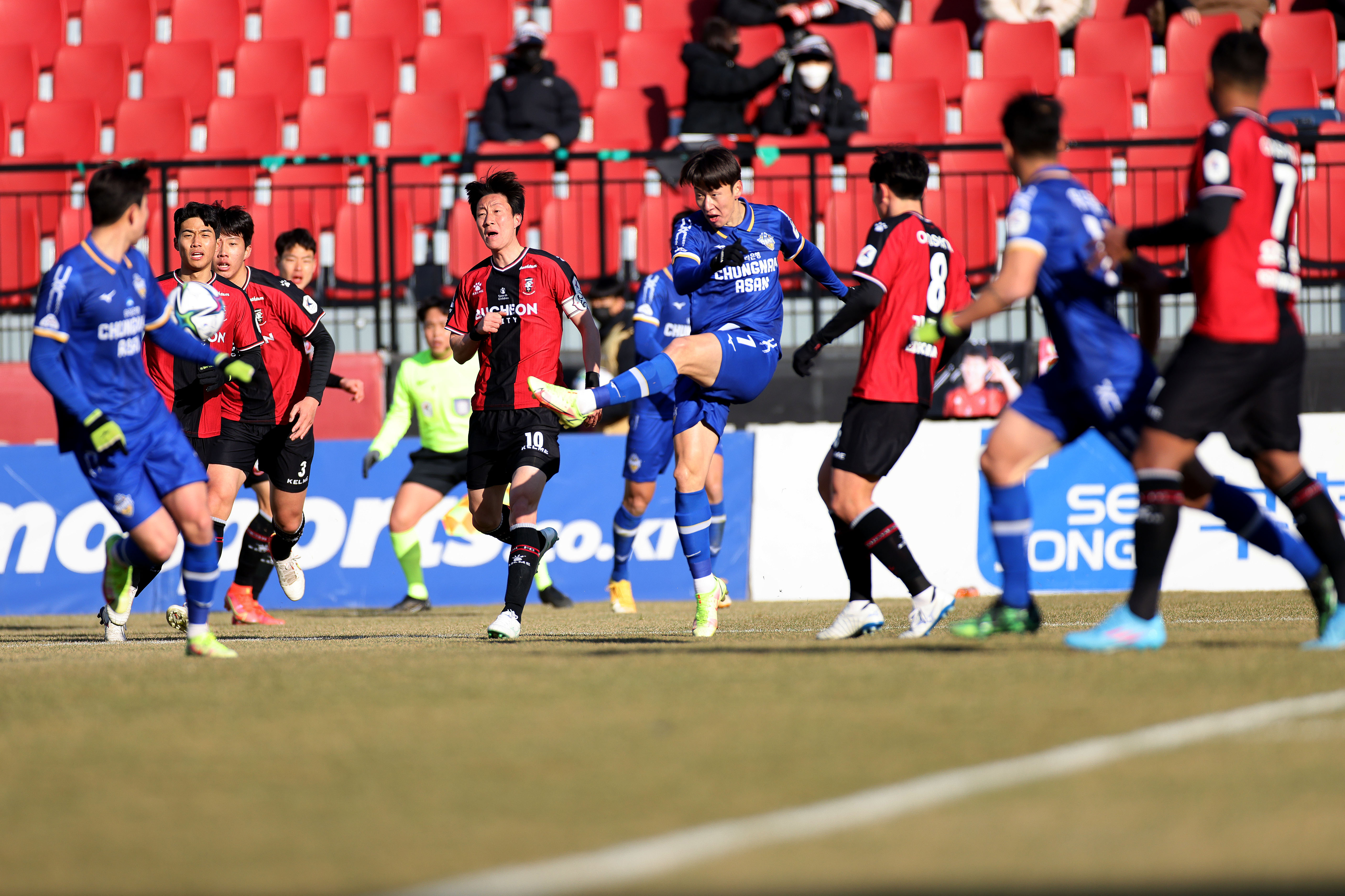 With a quarter of the season in the books, K League 2 currently has two front-runners for the title, and the playoff picture could go in any direction. The fixtures on offer in Round 15 suggest that things will remain as they are at least for another week, but the division has always been known to spring a surprise or two. The coming weekend's slate includes Busan IPark at home to Jeonnam Dragons, Daejeon Hana Citizen traveling to face Gyeongnam FC, and Gimpo FC hosting FC Anyang, all on Saturday. The Sunday fixtures include Gwangju FC at home to Ansan Greeners and Bucheon FC away to Chungnam Asan. 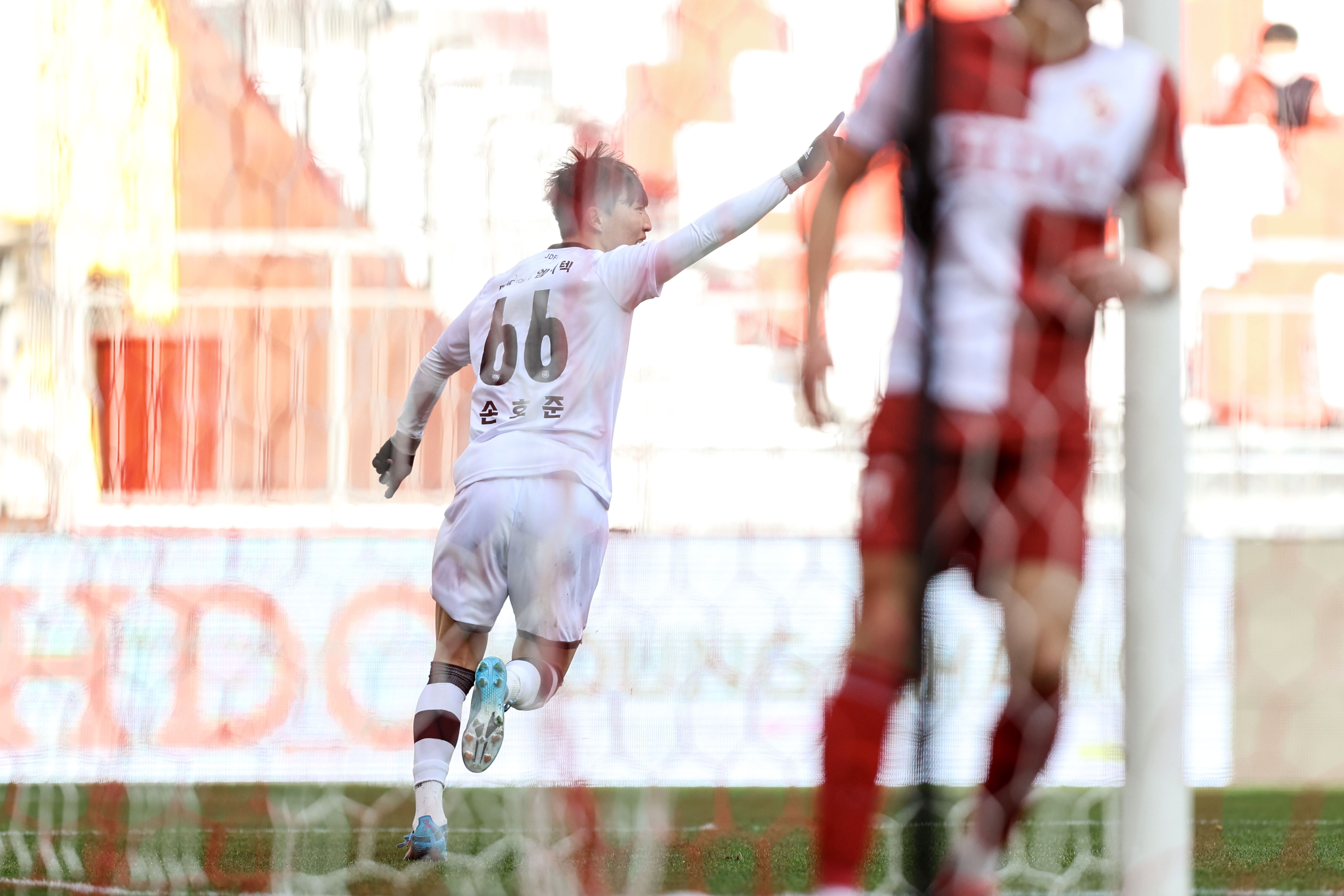 Busan IPark registered just a second win of the 2022 campaign last time out against Chungnam Asan, with Lee Sang-heon scoring a pair of goals while Park Jeong-in added one of his own. They made good on just a shade less than one-third of possession over the ninety minutes and didn't put on a particularly effective passing display overall but still managed to get the job done. The win snapped a five-match winless run in the process.
Jeonnam Dragons marked their return to league action following their group stage exit in the Asian Champions League with a 2-1 loss against Bucheon FC 1995. Goals from Samuel Nnamani and Han Ji-ho were enough to get Bucheon all three points. Leonard Pllana scored the lone goal for Jeonnam. They could have found an equalizer in the latter stages of the match, but Jeong Ho-in was sent off after receiving a second yellow card with under ten minutes to play and will be subsequently unavailable for this weekend's match.
In head-to-head action, Jeonnam have won the past three matches, including the only encounter this season, and eleven overall to Busan's seven, with nine matches ending in a draw. Son Ho-jun and Pllana were on the score sheet when the Dragons won back in mid-March. 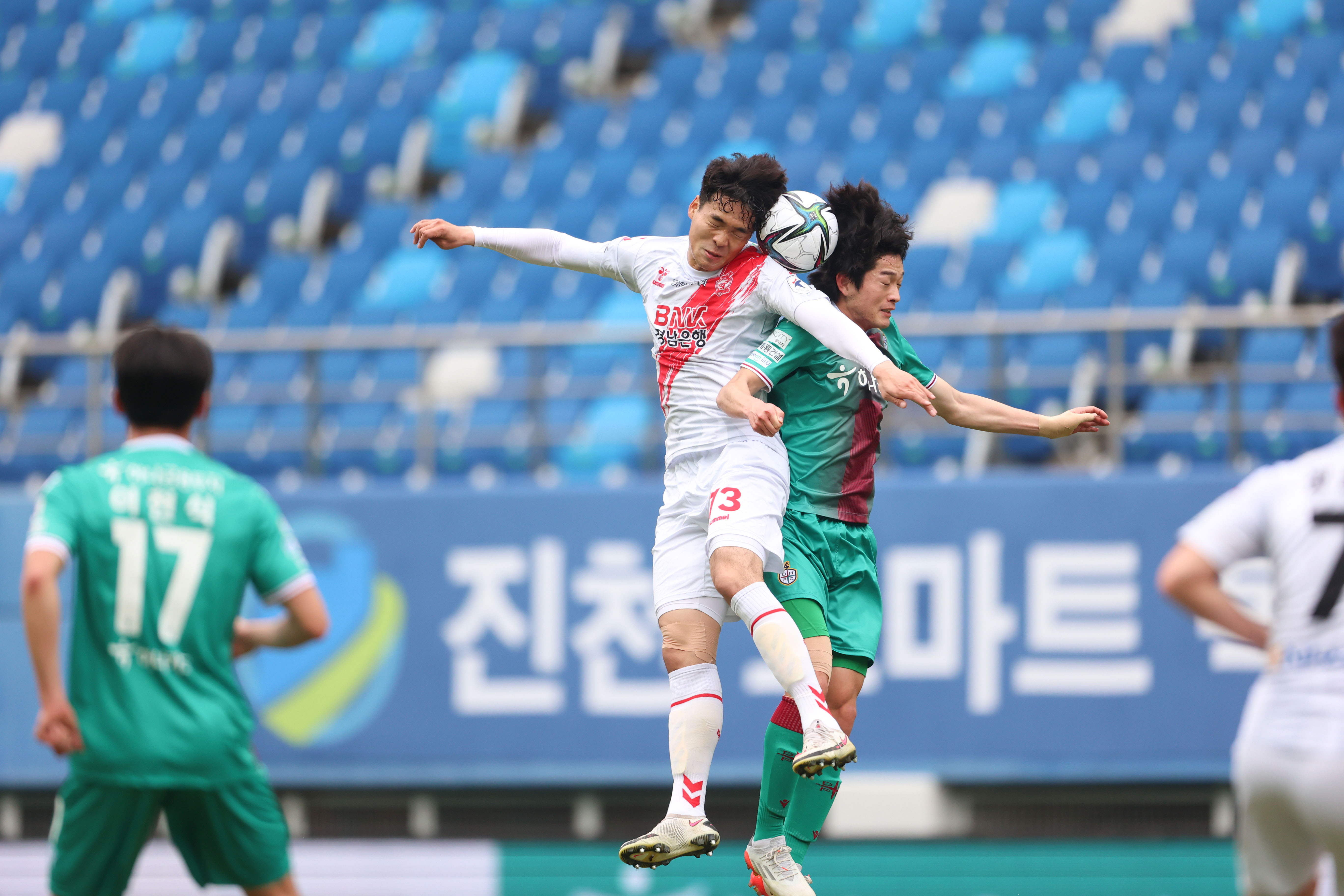 Gyeongnam FC return to action after having the last matchday off, having recorded a 3-2 win against Ansan Greeners the last time they played on May 3rd. Jeong Chung-geun gave them a first-half lead until the match was completely turned on its head with a quarter of an hour left, as the sides traded goals until the final whistle, with Tiago Orobó playing hero with the winner in the third minute of second-half injury time. Currently a mid-table side, they may be able to move up the grid if they can secure points in the coming weeks, with sides in front of them faltering recently.
Daejeon Hana Citizen looked porous defensively last time out, conceding four goals against Gimpo FC, but were spared their blushes thanks to a Masatoshi Ishida penalty with ten minutes to go and a late injury-time equalizer from Kim In-gyun. Daejeon need a bounce-back performance this weekend and must be much better defensively if they are to come away with a result that will hopefully keep them in touching distance of the league leaders. 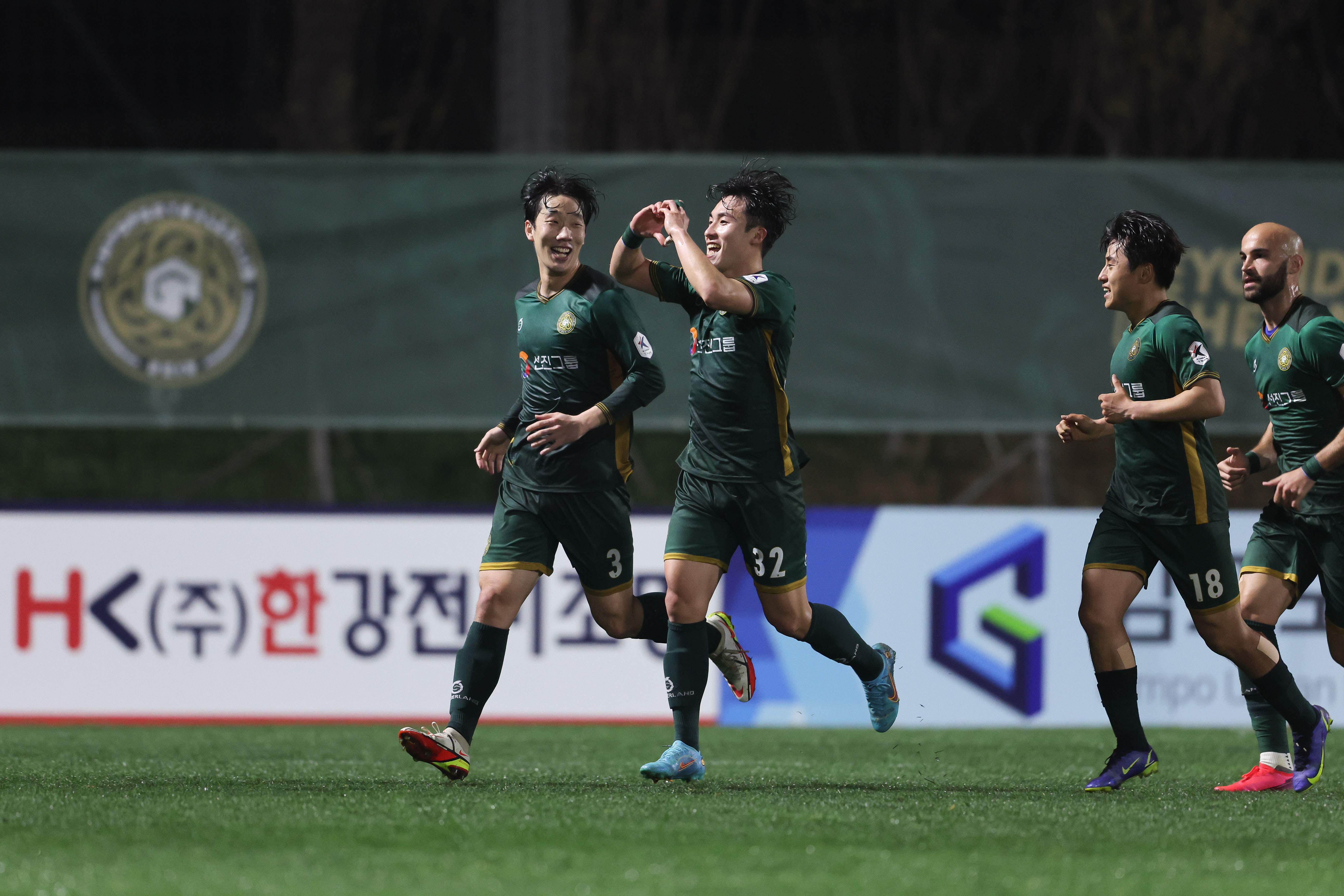 Gimpo FC missed out on a chance for maximum points in their previous match against Daejeon Hana Citizen after being in possession of a two-goal advantage midway through the second half. They currently have the joint-worst defensive record in the division with Gyeongnam FC, as both sides have conceded 25 goals to this point in the campaign. FC Anyang haven't exactly lit up the scoring charts this year with just over a goal-a-game average, but do have the duo of Kim Kyung-jung and Jonathan Moya, who have combined for ten goals between them so far this season.
Anyang last won in the league on April 6th and are in need of a shot of confidence after going winless in their past five matches in domestic competition and being knocked out of the FA Cup by Jeju United in the third round. In the first meeting against Gimpo this year, the Violets walked away 3-2 winners when they met in early April. 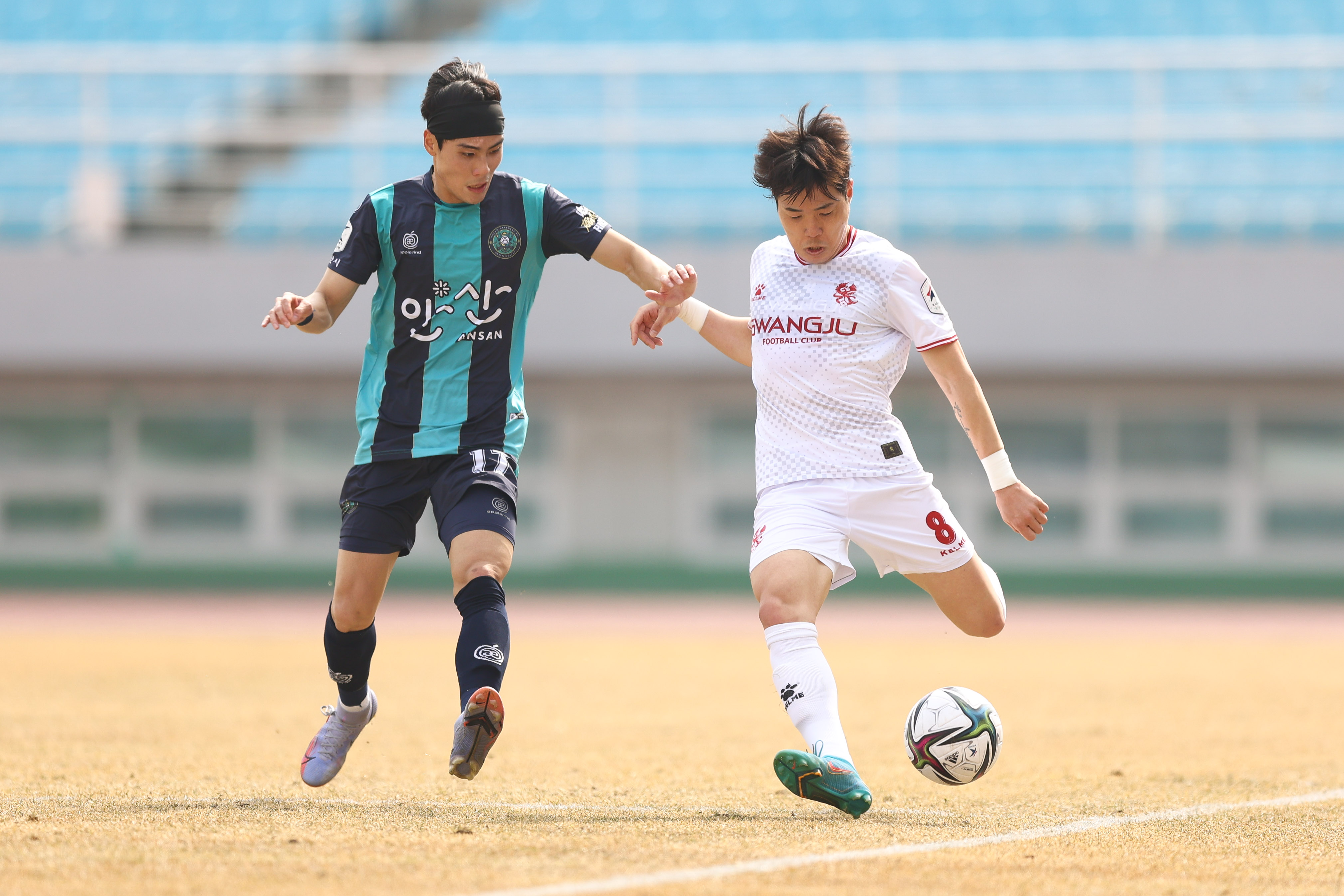 Gwangju remain first in the table following last weekend's narrow win against Seoul E-Land. With nineteen goals scored thus far, the Yellows are one of the highest-scoring clubs in the division at the moment, and their defensive record is quite strong as well, as they have only allowed ten goals in the thirteen matches they have played in. Reis leads the team in scoring with five goals but hasn't scored since a 2-2 draw with FC Anyang on April 18th. He played just the first half last week, so should be fresh and will likely warrant a place in the starting eleven on Sunday afternoon.
Ansan Greeners are still in search of their first win of the season, although did stymie FC Anyang last weekend, picking up a point in a 1-1 draw. Getting a result against the leaders will be a bit of a stretch, as the Green Wolves have averaged less than a goal per match over their winless run. The historical record, however, is quite even, with Gwangju edging the win column by a count of 4-3 with two draws between them. 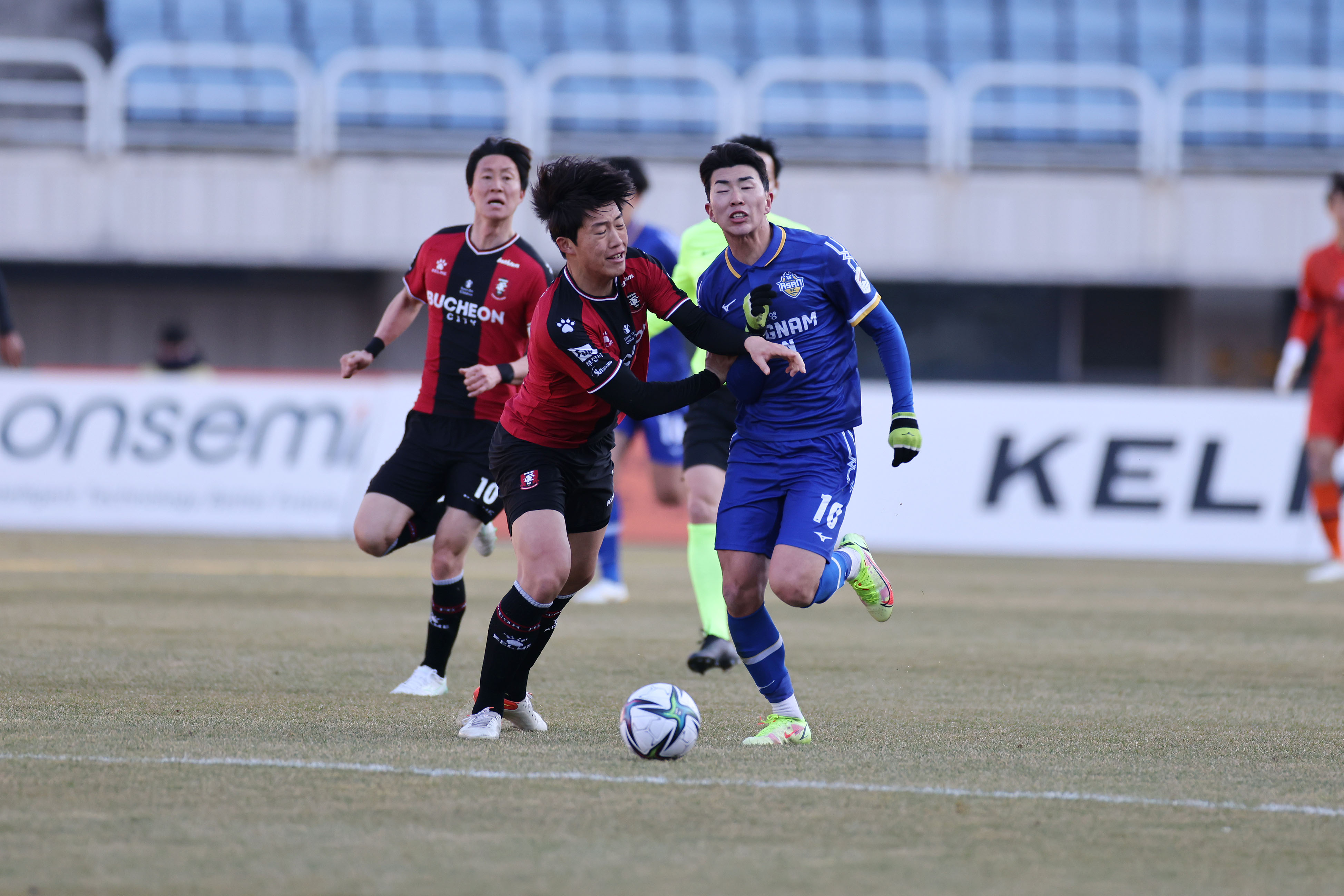 Chungnam Asan will look to bounce back following an unconvincing 3-1 loss to Busan IPark last round. One of their main bright spots this season has been Yoo Kang-hyun, who has found the net on six occasions. He is currently on a three-match scoring streak and will hope to add to his tally on Sunday evening. The Owls enter the match with an interesting statistic, having scored thirteen goals while conceding the same amount in the thirteen matches they have played in 2022. Can they get a win and nudge their goal differential in a positive direction?
Bucheon FC 1995 continued their fine run of momentum last weekend with a 2-1 win against Jeonnam Dragons and remain just two points off the summit. Bucheon have proven to be a completely different side this year. They finished last a season ago and allowed 53 goals over the course of the campaign but currently have one of the best defensive records in the second division thanks in part to a large overhaul in the off-season to improve the club that has provided significant dividends. They will hope to keep pace at the top with a win, but should be wary that their opposition are not to be taken lightly.
Branko Belan
K League United Senior Columnist
다음 글 2022 Hana 1Q K League 1 Round 12 Preview
이전 글 2022 Hana 1Q K League 2 Round 14 Preview
K LEAGUE