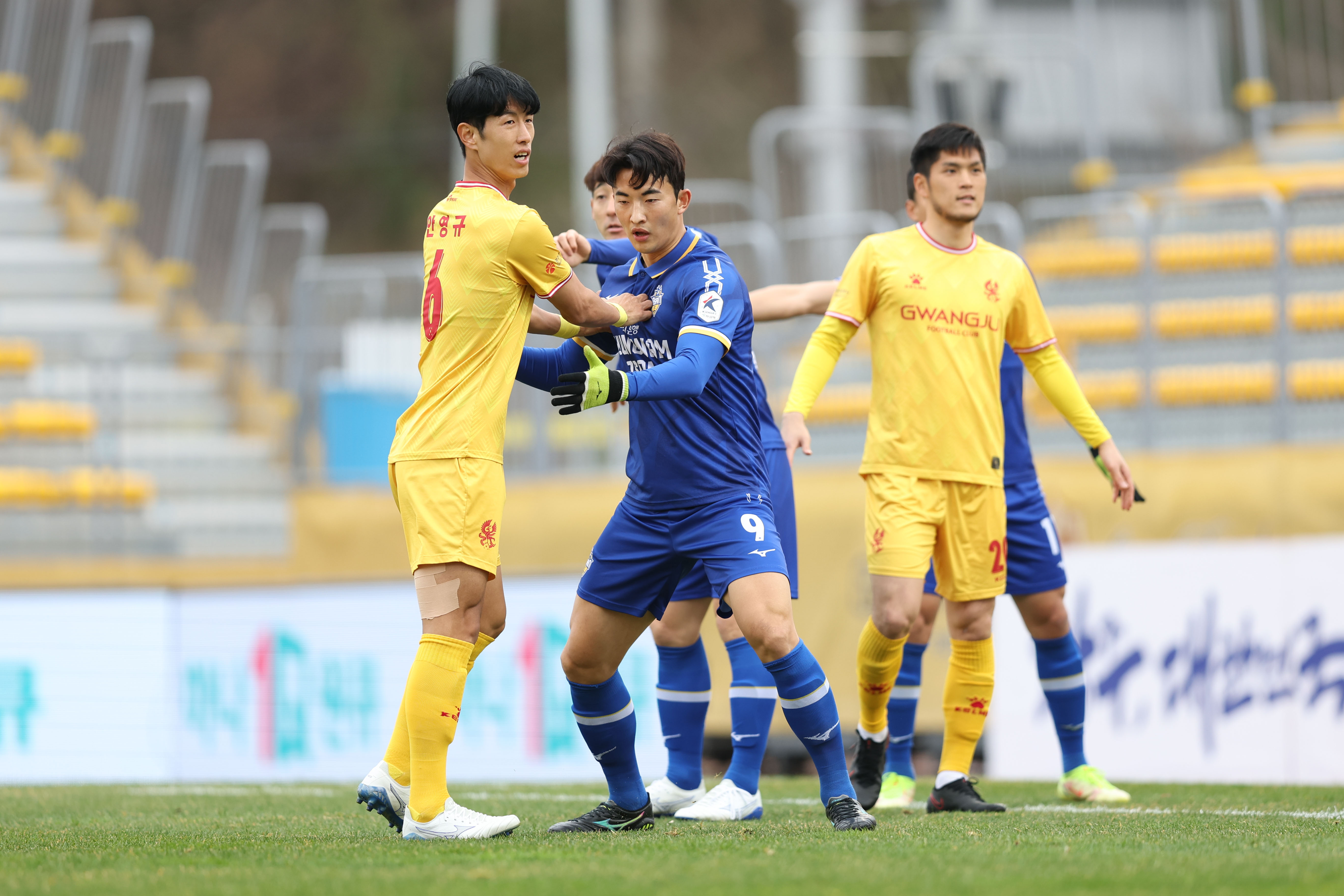 No let-up in the K League 2 action despite the international break with five games coming up this weekend. League leaders Gwangju FC versus another in-form team Chungnam Asan will be seen as the match of the round while Daejeon Hana Citizen, now on a run of nine unbeaten, are the team to watch. Seoul E-Land skipper and star forward Kim In-sung is the player to keep an eye on as three of his 10 combined goals and assists in K League 2 have come against this weekend's opponents, Bucheon. 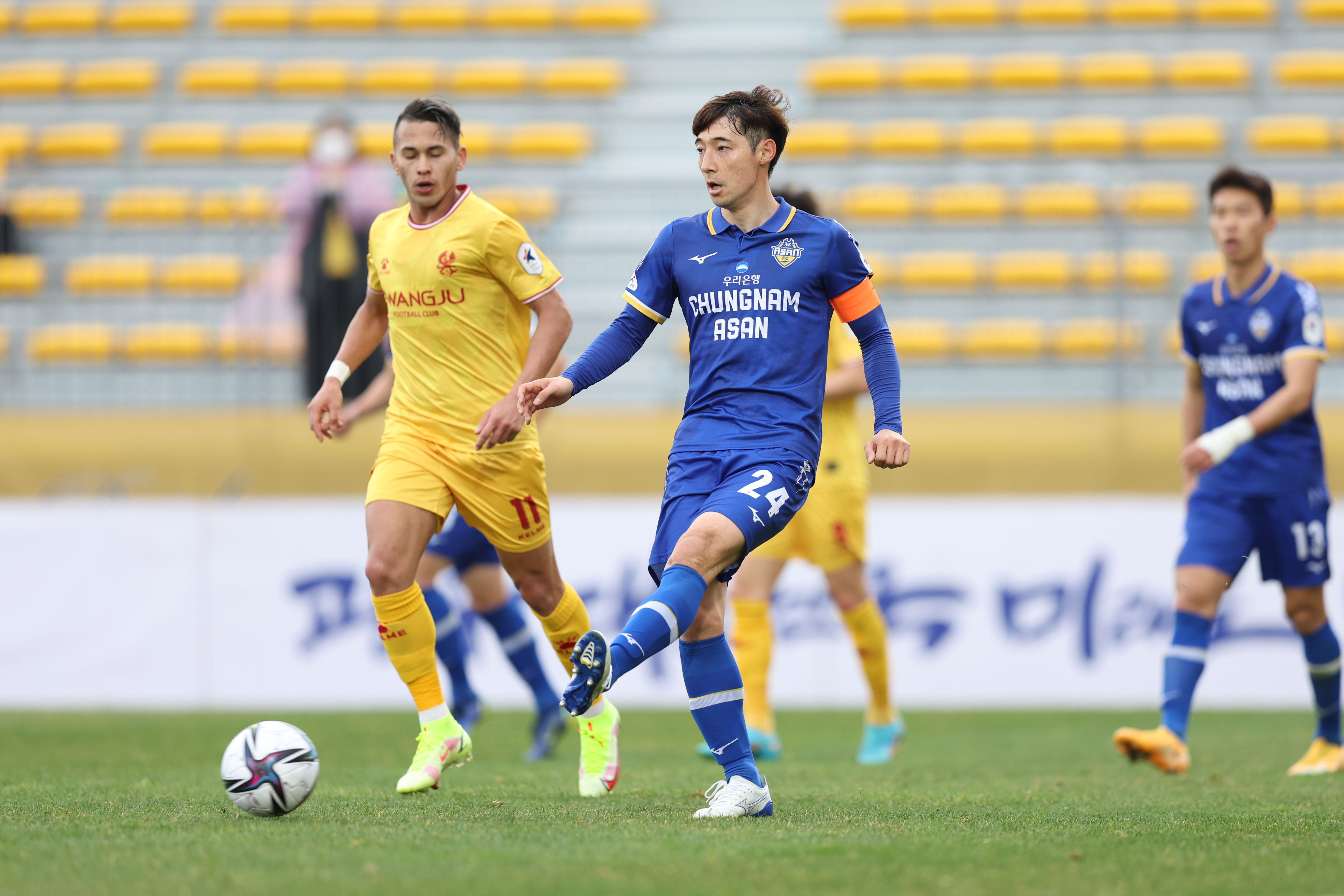 Two in-form teams meet this Sunday evening when league leaders Gwangju FC take on Chungnam Asan FC. Since the last time that these two teams met, back in Round 7 when Gwangju picked up a 2-1 win, the Yellows have been on a run of 11 unbeaten with nine wins and two draws. Chungnam Asan, though, are on a mini unbeaten run of three with two back-to-back wins. The most recent was a 1-0 victory over Jeonnam Dragons which also made it three straight cleansheets. The Owls are now up to fifth and into the playoff spots.
The victors may well be determined by which team is the sharpest in front of goal. Gwangju are the league's second-top scorers with 26, just under two more than the team's xG of 24.28. The Griffins are also second for shots on target with 42.5% of all attempts on goal testing the opposition goalkeeper. Chungnam Asan, meanwhile, are have an xG of 23.7 - the fourth-highest in K League 2, lead by striker Yoo Kang-hyun who has the best xG in the division at 7.83 and seven goals scored. The first meeting of 2021 ended in a 2-1 Gwangju win thanks to a late Reis winner in the 87th minute. A similar result would keep Gwangju's six-point cushion at the top of the league while a result for the Owls could be enough to move up a place into fourth should they win and score three. 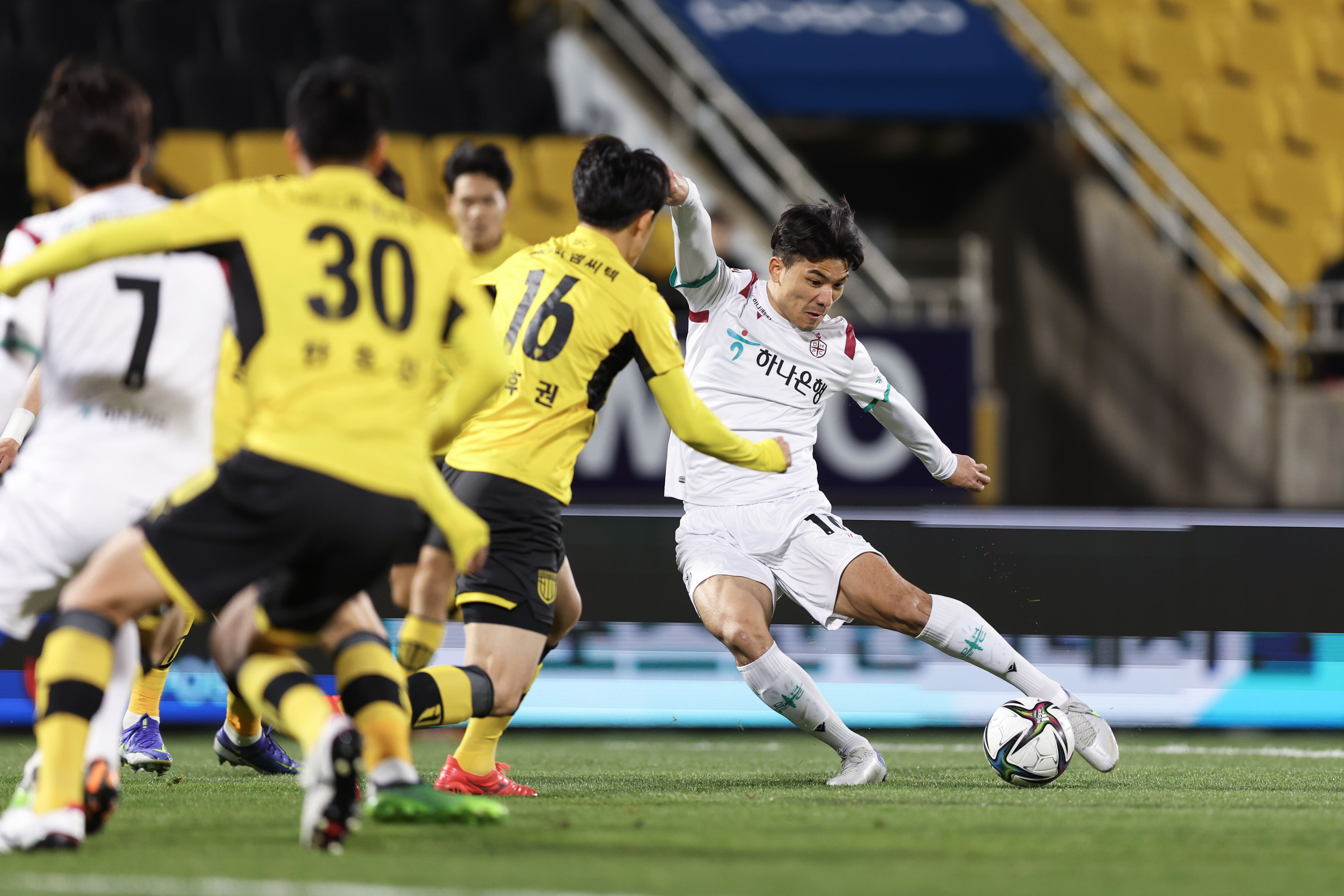 Daejeon Hana Citizen are now on a run of nine games unbeaten with seven wins and two draws. Only table-topping Gwangju have a better record. Daejeon's most recent win was a last gasp victory away to Seoul E-Land with Won Ki-jong's 92nd-minute glancing header enough to seal all three points. After the Round 18 win over the Leopards, all players ranked second to seventh in the Adidas Points were all from Daejeon. The Adidas Point rankings serve as power rankings with data based on performances over the last five matches.
Midfielder Lee Jin-hyun and forward Leandro have amassed 5,123 and 4,637 points respectively to sit third and fourth. In fifth is defender Lim Dug-keun who laid on the assist for Won Ki-jong's winner against Seoul E-Land last weekend. Goalkeeper Lee Chang-geun, who now has two cleansheets in a row, is sixth with 4,467 points. Direct winger Kim Seung-seop is seventh while Cho Yu-min is second with 5,377 points but will miss Daejeon's next two matches due to international duty. The all-action centre back has been called up to the Korean national team squad for the friendlies with Brazil, Chile, Paraguay and Egpyt. Kim Jae-woo could deputise and help guide Daejeon to a 10th game unbeaten when the Purples face Jeonnam Dragons on Saturday. Daejeon emerged as victors when the two teams met earlier in the campaign, winning 1-0 thanks to a 69th-minute strike from Kim Seung-seop. 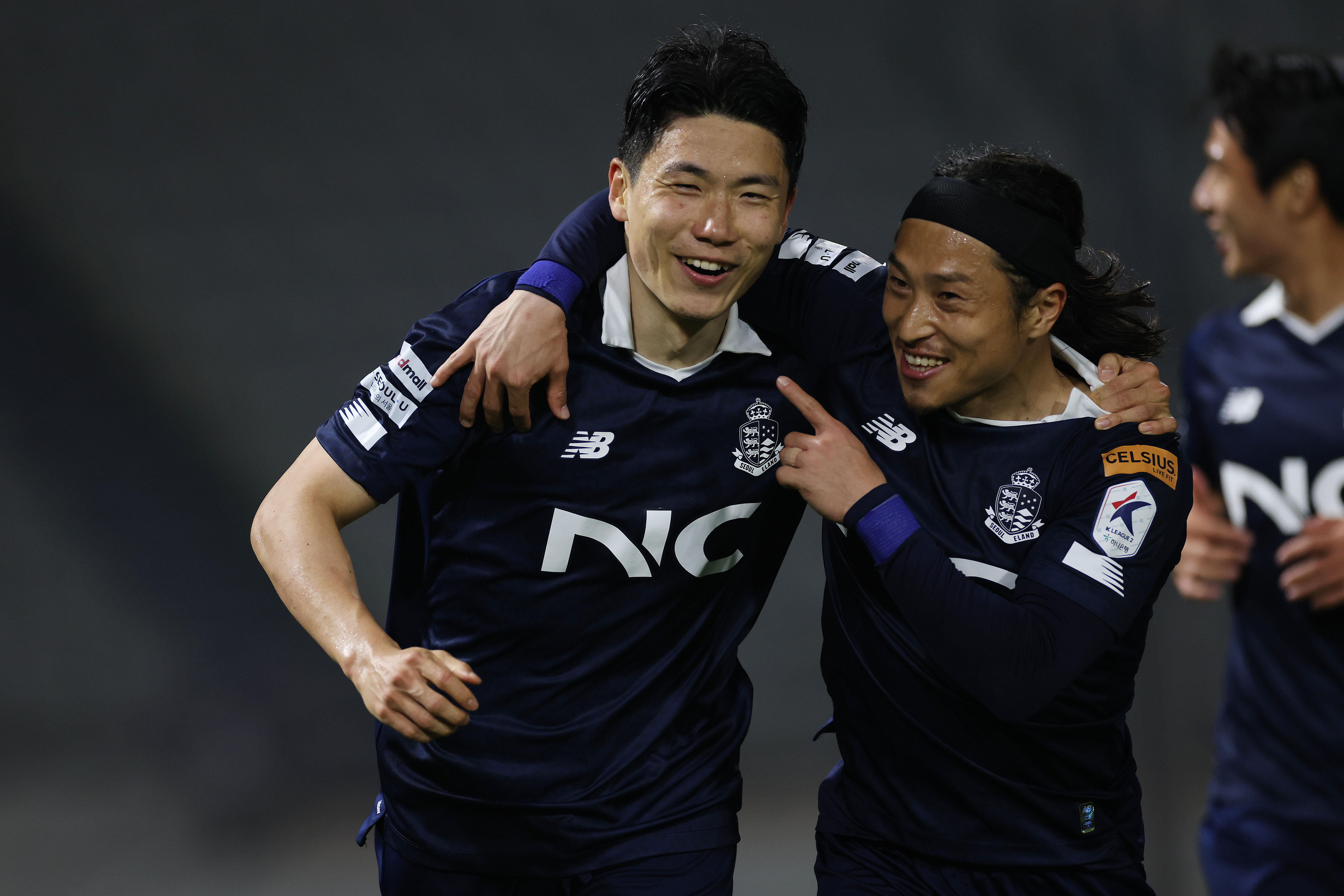 Following the 1-0 loss to Daejeon Hana Citizen last weekend, Seoul are now on a run of just one win in five. Seoul E-Land captain Kim In-sung will be looking to fire his team back to winning ways this weekend when the Leopards take on Bucheon FC 1995. Kim made the switch from Ulsan in K League 1 to the Leopards in the second tier and made 15 appearances last term, scoring six and assisting two. This season, in 13 appearances, Kim has two goals. That gives the 2020 ACL winner 10 combined goals and assists in K League 2 and three of those have come against Bucheon. In Round 29 last year, Kim scored and assisted one in a 3-0 win for E-Land. He also scored in a 2-1 loss to the Reds in August last year. The Leopards take on Bucheon at home this Saturday with an 8PM kick-off.

Elsewhere in K League 2 Round 19

Elsewhere, Busan IPark begin life without manager Ricardo Peres who left the club earlier this week. The Royals in 11th place could move off the bottom of the table should they be able to pick up all three points on Sunday against Ansan Greeners in 10th. But both teams have just one win in their last five outings and the previous meeting this term ended as a 1-1 draw. On Saturday, Gyeongnam FC take on Gimpo FC looking for a first win in three. Gimpo, meanwhile, are unbeaten in their last two and have moved up to eight. A win against Gyeongnam could move them up a place.
[READ: "K League's U22 rule has been a great help to me": Goh Young-jun] 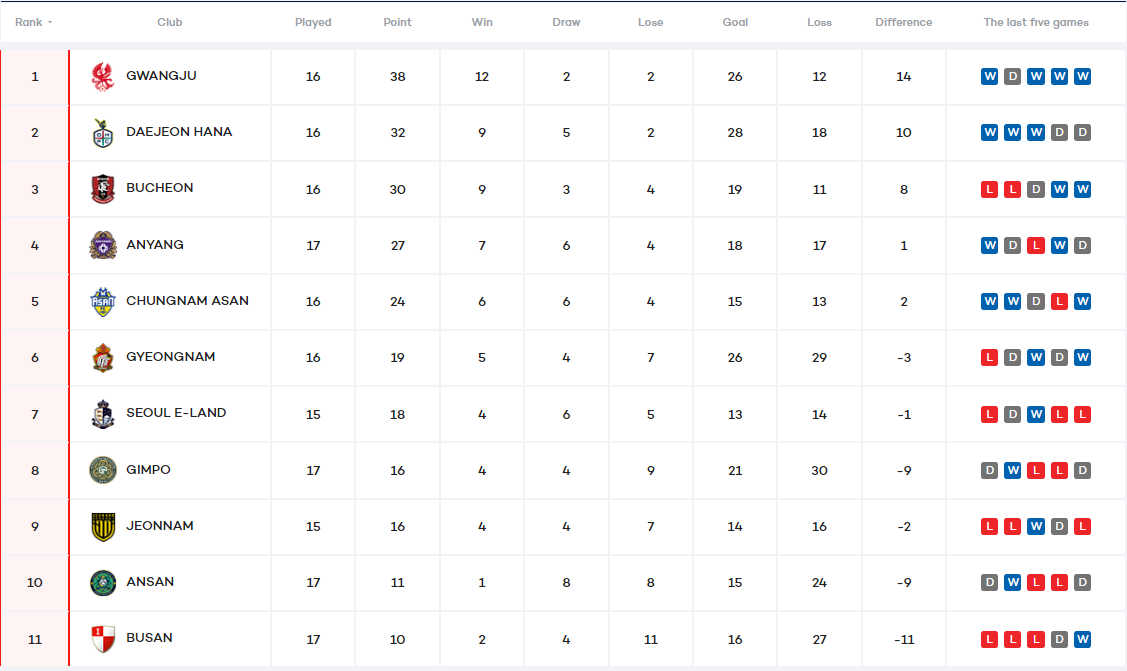