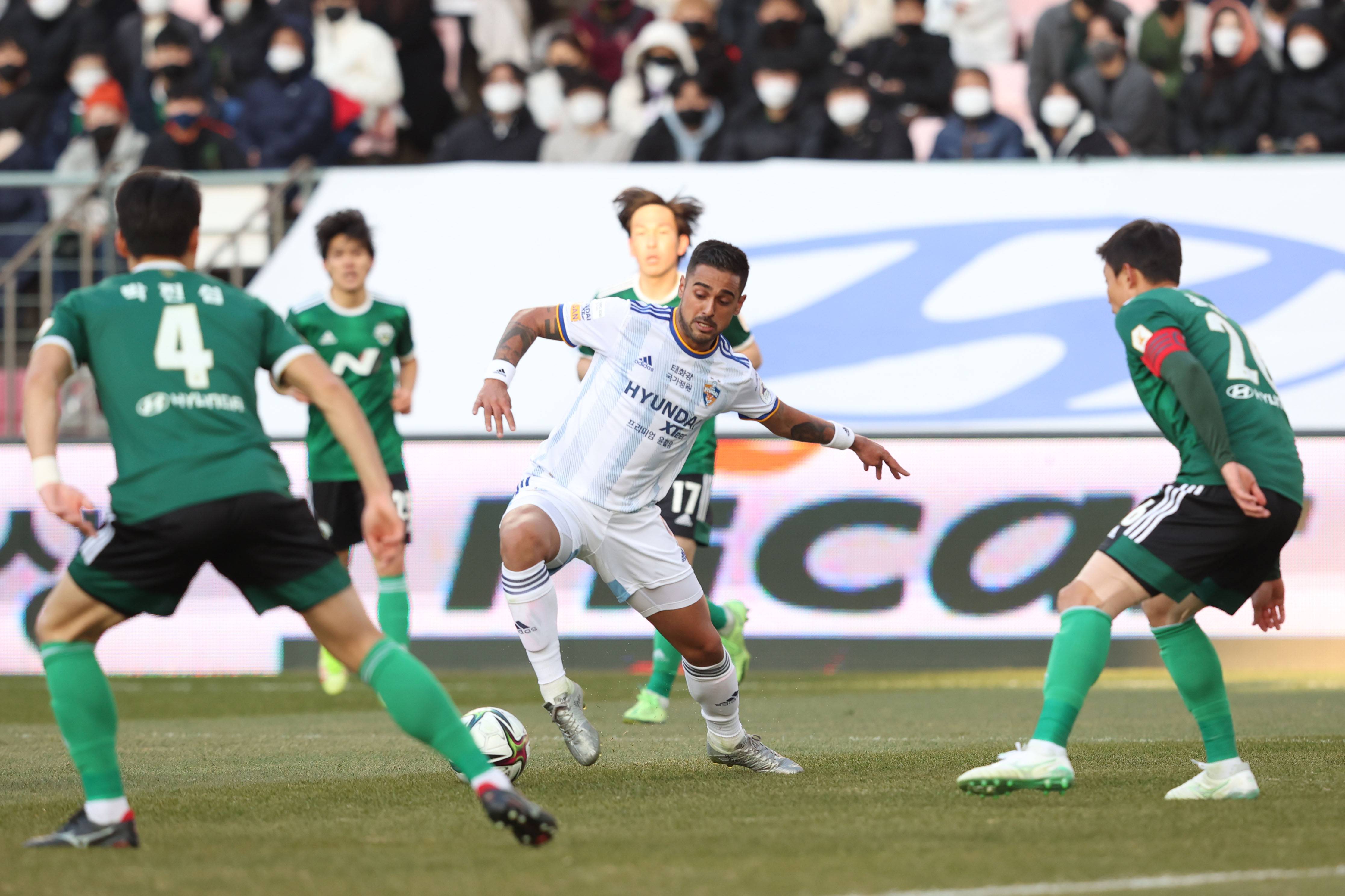 K League 1 returns from the international break this weekend with Round 16. Headlining the set of fixtures this Sunday evening is an enticing clash between runaway league leaders Ulsan Hyundai and reigning champions Jeonbuk Hyundai Motors. With the points gap between them set to shift to 14 in the event of a Horangi win, Sunday represents an opportunity for Ulsan to further underline their title credentials or a last chance for the Green Warriors to keep in the race for the title.

Ulsan Hyundai entered the break in winning form, tasting victory in their last three league outings and going unbeaten in five. Round 15 saw Ulsan travel to face Suwon FC and were required to show their resilience once more as they fought from a goal down. Second-half goals from Vako Qazaishvili and Jun Amano cancelled out Lee Seung-woo's opener and ensured that the Horangi head into this weekend with a ten-point lead at the top.
Prior to the break, Jeonbuk Hyundai Motors saw their unbeaten run of 16 games across all competitions come to an abrupt halt as they were beaten by, and also leapfrogged by, high-flying Jeju United. Despite the undefeated streak, consistency has been hard to come by for Kim Sang-sik's side and Round 15's defeat is set to only raise further questions of Jeonbuk's title defence.

Both sides are set to welcome back a number of players to the fold who have been absent on international duty. Ulsan's returnees include Jo Hyun-woo, Kim Young-gwon, Kim Tae-hwan and Um Won-sang. Meanwhile, Jeonbuk's national team contigent was comprised of Song Bum-keun, Kim Moon-hwan, Kim Jin-su, Lee Yong, Paik Seung-ho, Kim Jin-kyu and Song Min-kyu. Given the regular use of the outfield players across all four friendlies in the last fortnight, both managers will have to assess their team's fitness and if some rotation is required.
However, the sides will not be at full strength. Whilst away, Jeonbuk's Song Min-kyu was reported as testing positive for COVID and will not be available this weekend. Despite this, both managers are set to have nearly their full squads at their disposal.

Sunday's encounter represents the 101st encounter between these two sides across all competitions with Jeonbuk dominating the fixture by 42  wins to 34. However, the Green Warriors have found things increasingly difficult against Ulsan in recent encounters, falling to a 1-0 defeat in the reverse of this fixture earlier in the season thanks to a Leonardo goal.
The Munsu Stadium has also not been a happy stomping ground for the away team in recent clashes, with both sides failing to score there on two occasions last season.
[READ: K League 1 Round 16 Preview]

What to Watch
Um Won-sang

Despite having been in action for the Korean National Team, it seems likely that Um Won-sang will feature in this encounter in some capacity for the hosts and, when he does, will be expected to excite fans again. Since signing from Gwangju in the winter, the young winger currently has six league goals and four assists to his name and has recently built on this reputation with some solid showings from the bench for Korea after being a last-minute call-up to the squad, providing Son Heung-min the assist to equalise in their match against Paraguay.
Having also spent time these last two weeks getting to know three of Jeonbuk’s full-backs better whilst on international duty, Um will be hoping to impress once more on Sunday evening.
Jeonbuk's Aerial Threat

The title defenders have found goals and results somewhat harder to come by this campaign, with forwards Gustavo and Stanislav Iljutcenko continuing to search for the form that saw them both finish in the top four scorers for last season. However, Jeonbuk have been prolific in their crosses this season, delivering the fourth-highest amount in the league with the second-highest accuracy.
Furthermore, the Green Warriors also have entered the fourth-highest number of aerial duels this season with the division’s highest success rate. Gustavo also ranks first in the league for his aerial ability and could provide a threat to Ulsan in this manner come Sunday.