Gwangju FC defender Aaron Calver admits that, with his team sitting top of the K League 2 table and with a comfortable lead, that the season has panned out better than he expected. The Australian, who signed from Perth Glory in March this year, says that the task at hand is to go up to the top division and stay there.

Calver joined in March but was eased in gently, having to settle for a place among the substitutes at first before eventually making his full debut in the 4-0 win over FC Anyang on 11th June. More recently, Calver got himself on the scoresheet as the Yellows ended a run of four matches without a win, getting the opening goal in the win over Bucheon FC 1995. With almost all of the second half of the season still to go, the 26-year-old is expected to feature heavily Gwangju look to seal an instant return to the top flight.

Paul Neat: You got the win [last] Tuesday, after a run of four games without a win. It's been lucky, though, for you, because teams like Daejeon have been also drawing and losing at the same time. Had you been paying attention to their results or the other teams throughout that run?

Aaron Calver: "I's hard not to but we've tried to just focus on the way that we play football. We did go four games without a win but it's in a season of 40 games, you're obviously not going to win every game. You're going to have that little patch somewhere throughout the season so it's just about how quick you can get out of it and kind of get back to winning and get that momentum again. So hopefully, we've done that now and we can keep trying to increase the gap as the season goes deeper."

PN: You've got a very healthy lead at the top of the table at the moment with just over halfway gone. Obviously, you must be very happy with how the team has been doing but are you a bit surprised? Has it gone better than expected?

AC: "Yeah, for sure. I think I joined about round seven or so. So I was kind of keeping an eye on the first few games and I saw that they're doing really well. So coming over they're off to a good start, but I didn't think it would obviously you know,...we've I think we've only lost three games all season so been a pretty good campaign so far. So yeah, a little bit surprised, but once I got there, and learn the coach's style and with the boys we got here, it's not really a surprise, to be honest."

PN: Well, for someone who's played in the ACL, and won the A-League a couple of times. What made you sign for a second division team in the K League? How did the move come about?

AC: "I was at Perth Glory back in the A-League and I've always had ambitions to come to Asia, whether it be Korea or somewhere else. And this opportunity kind of arose just off the back of a few games and obviously, the window lining up and Perth Glory were good enough to let me go for a small fee. So yeah, I just wanted to give it a crack. And so at the end of my career, I can have no regrets, saying that, you know, I didn't try it or whatever. So yeah, that was the main thing, and it's still a very good level of football, if not maybe even better, so yeah. Can't complain at all."

PN: I've been looking looked at your career history and you've played with quite a lot of people who have come over to Korea. Did you speak to any of those people about K League?

AC: Yeah, I did. I was actually playing with Brendan O'Neill, who just recently played for Pohang at the time, he was that Perth Glory with me, and he's a really close friend. So I had a good chat to him about it. Connor Chapman, who I've played with before, and he's been here for quite a few years. There was another one, Matty Jurman who I used to play with as well. So yeah, there's a few boys that I know that they've just said: 'Yeah, mate, you've got to do it'. And even Alex Wilkinson who was pretty successful here at Jeonbuk. I played with him when we won the Grand Final and he's someone that I've kind of tried to imitate my game off, I guess. I had a chat to him about it and he just said to me go so it was a no-brainer.

PN: How much did you know about Gwangju FC before you signed?

AC: "Not a lot, to be honest. I just kind of looked at them when I had the opportunity. I did know that they just got relegated so I thought that they would have ambitions to go straight back up, which they clearly do. Now, hopefully, if we go up this year, it's more just about trying to stay there for as long as possible, I think and doing well."

PN: What's it like being abroad for the first time in your career?

PN: What's been a culture shock for you since you came over?

AC: "I think just the actual football, that how hard they kind of train and how they pretty much live and breathe it. Like I wasn't kind of expecting that side of it. And then obviously, just things like the food and the weather at the moment. The humidity, it's gonna take a bit of getting used to but slowly but surely we'll get there. So yeah, there's quite a few things. But I've been here before for a few games (in the ACL), so I kind of knew what to expect."

PN: Well, I have to ask you about the food. What's your favourite Korean food that you've eaten so far? 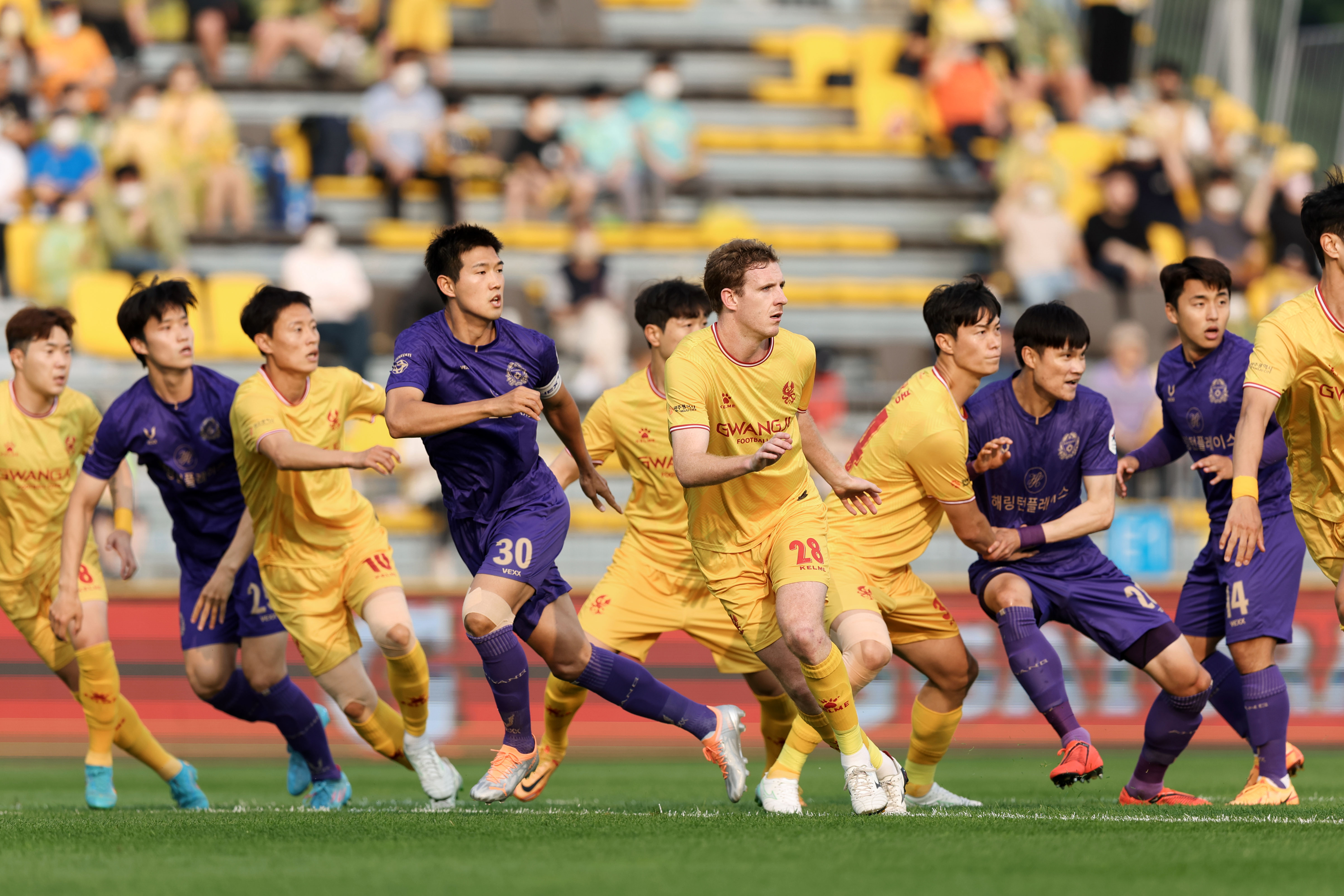 PN: What's the manager like to work with? It's his first season managing at this level so what's he like out on the training pitch and stuff like that?

AC: "He's been really good, he's quite open. I think he's quite modern in his approach to football, having retired not too long ago. There's nothing you can't say to him or ask him and approach him whenever you need so he's very good like that. Obviously, when we're on the pitch, it's intense. It's high quality, it's a million miles an hour, but that's what you need to to be successful. So then, tactically, he's very thorough. He puts a lot of work in, and we do a lot of videos. And he kind of eased me into the minutes that I was playing, which was, at the time probably a little bit frustrating for me, but in hindsight now, it's, left me in good nick for the rest of the season. So I think it's been really good."

PN: You've been playing on the right-hand side of a back three this season. What's that like? Is it something you are quite used to?

AC: "Yeah, I've been used to that actually, the last two years. Or right back of a back four so being outside is not too alone for me so I feel quite comfortable there. And the coaches kind of give me a bit of a licence to attack a bit more, which is a bit of fun and nice. So yeah, I'm enjoying it. It's a good formation and for us it's working."

PN: What do you think is the main differences are then between the K League and the A-League in terms of style of play?

AC: "The speed. The speed and intensity of the K League is obviously higher. But I think that A-League is a bit more controlled, position-based - kind of a bit more tactical, I guess. Here, it's a bit more of a, not every game, but some games are just like a fight if you understand that."