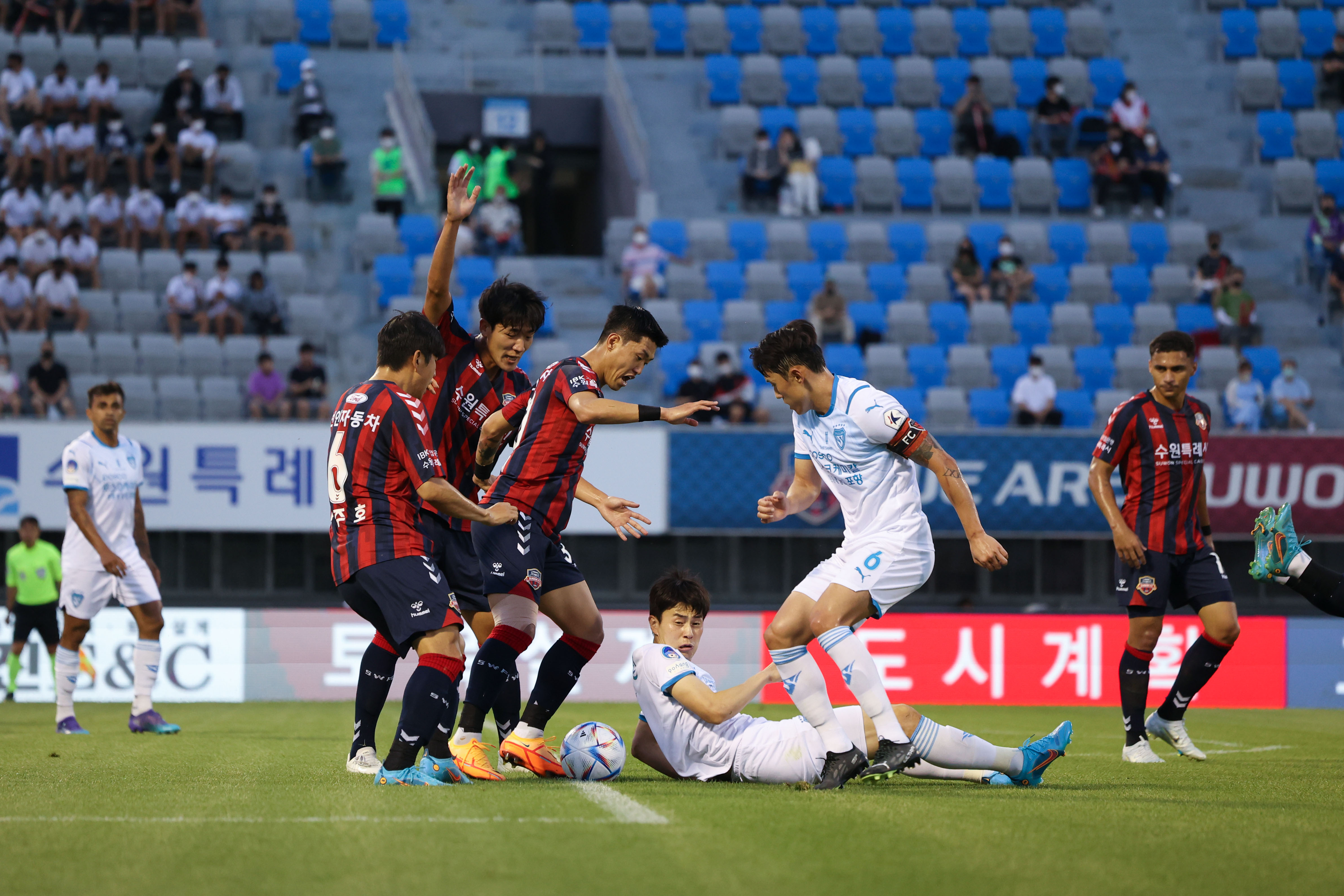 The penultimate round of midweek fixtures in K League 1 has thrown up some enticing fixtures. Suwon FC host Pohang Steelers, the former are looking to move into the top six while the former will be keen to tighten their grip on third place. Suwon Samsung Bluewings are on the hunt for a fourth win in six matches while Jeju United's Joo Min-kyu will be looking to score for a fourth time against Incheon United this season. All that and more as we look ahead to Round 30 of the 2022 Hana 1Q K League 1 season. 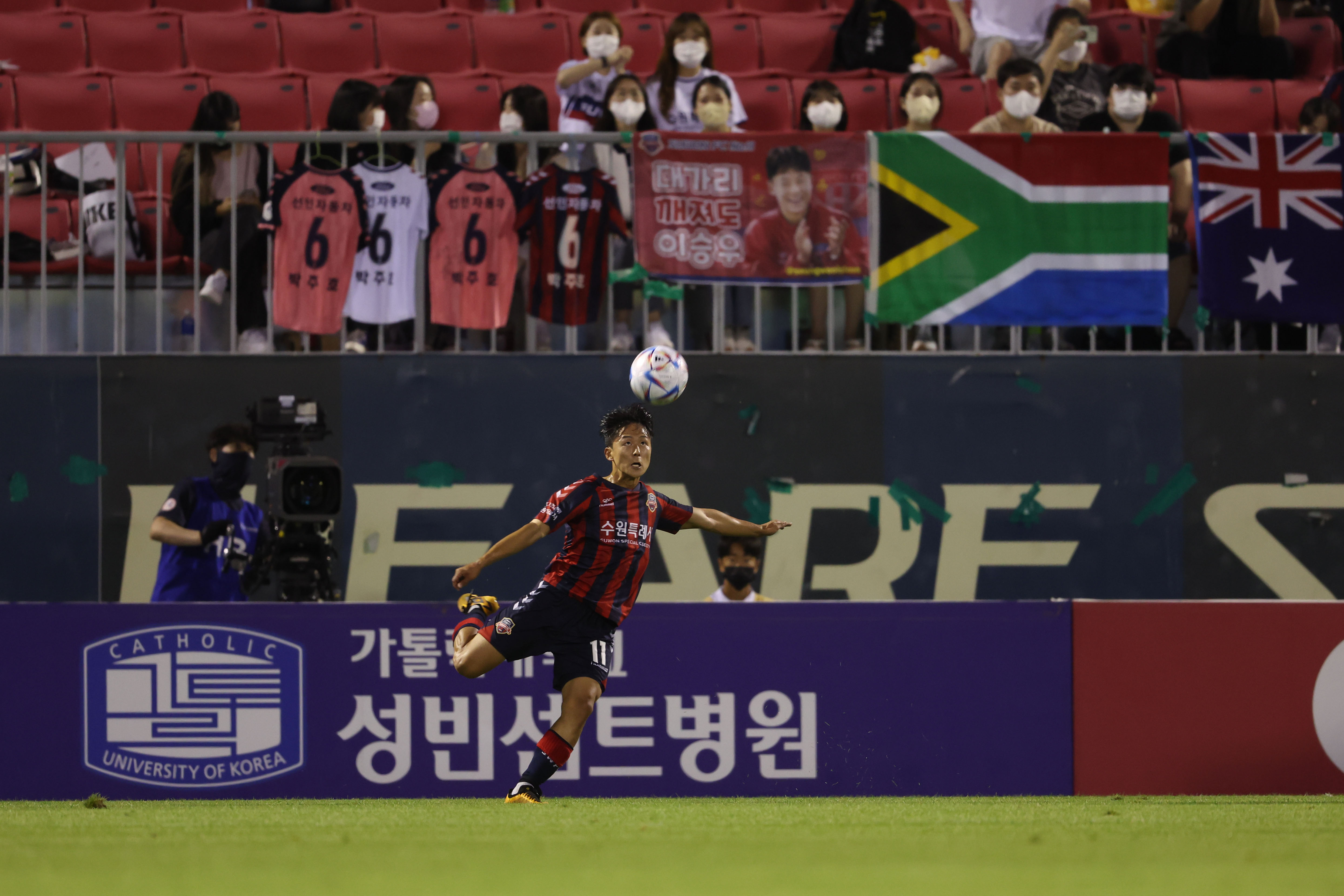 There were plenty of goals when Suwon FC and Pohang Steelers were last in action. Suwon FC picked up a 2-2 draw on Friday night at home to Jeju United thanks to a 90th-minute Kim Geon-ung equaliser while Pohang put four past relegation-threatened Daegu FC on Saturday. With just four rounds to go until Final Round, the objectives for these two clubs is clear: Suwon need three points in their quest to finish in the top half of the table while Pohang, with a four-point cushion over fourth, will be keen to secure a victory as the Steelers look to return to the AFC Champions League.
The two teams are among the top scorers in the division but their recent form has been someone inconsistent. Both have just two wins in their last five but Suwon have lost two, and Pohang just one. Both Suwon and Pohang score highly for their shooting accuracy, the Steelers have the best at 39.5% while Suwon are fourth at 36.6%. From the first two meetings of 2022, each team has one victory. The most recent encounter was in June at Castle Park where hosts Suwon FC picked up a 2-1 win - Lee Seung-woo's stunning goal just after the hour mark was followed up by a Kim Seung-joon strike 14 minutes later.
[READ: Interview with Suwon FC's Lee Seung-woo] 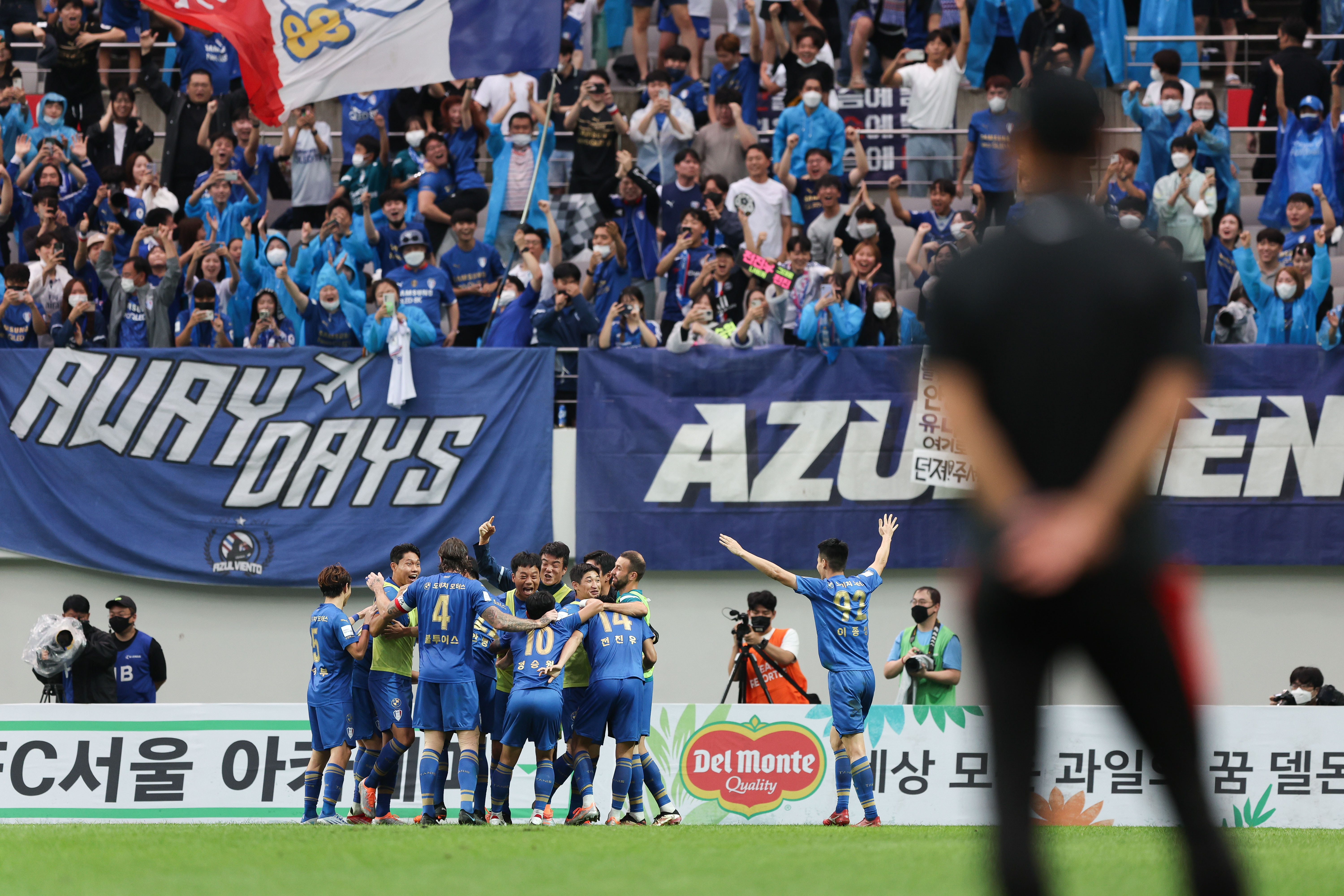 Three wins in five has taken Suwon Samsung Bluewings into ninth place and five points clear of the relegation playoff places. While wins over Jeju United and Seongnam FC will have had the Bluewings faithful in good spirits, the 3-1 away win over bitter rivals FC Seoul will have left them on cloud nine. A brace from young star Oh Hyun-gyu and a first goal in a Suwon Bluewings win for An Byong-jun, secured the Super Match spoils for the first time in four meetings. That earned back-to-back wins for Suwon for just the third time this season. Up next for Lee Byung-keun's men is Ulsan Hyundai who lost to Seongnam FC last time out. 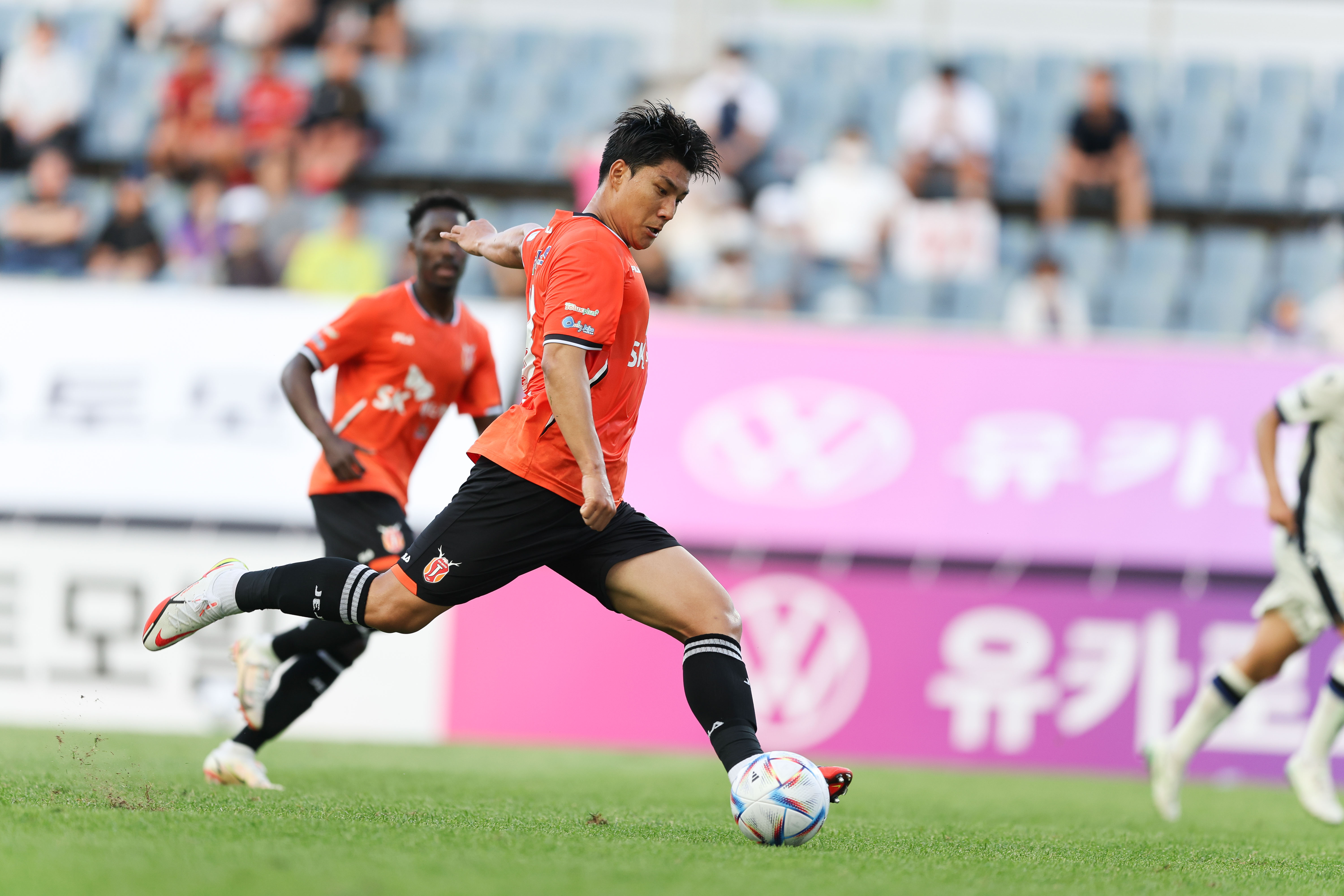 Jeju United striker Joo Min-kyu is, just as he was last year, the league's top scorer. The former Goyang Zaicro, Seoul E-Land, Sangju Sangmu, and Ulsan Hyundai man has 15 for the season following his 34th-minute strike against Suwon FC on Friday to move him to the top of the charts. Some of his goals have proven to be very important. In terms of goals which have turned draws into wins or defeats into draws, Jeju are 10 points better off - the difference in sitting fifth or just above the relegation zone. Up next for Joo and Jeju is a match with their rivals for AFC Champions League qualification Incheon United. Joo has scored three against Incheon already this season. A fourth could help the Islanders get back to winning ways following a run of three matches without victory.

Elsewhere in K League 1 Round 30

Meanwhile, Gangwon FC take on Gimcheon Sangmu seeking a third straight win. Choi Yong-soo's side are currently sixth and have a two-point cushion over Suwon FC in seventh. Gimcheon, too, have moved up the table. The 2-2 draw with Jeonbuk Hyundai Motors on Saturday, coupled with Daegu FC's heavy loss to Pohang Steelers, has moved Kim Tae-wan's side up to 10th on goals scored.
Jeonbuk Hyundai Motors host FC Seoul this Wednesday night having picked up just one win from their last five outings in the league. A late penalty from Kim Jun-beom levelled things up for Gimcheon last time out after Modou Barrow had put the Green Warriors in front. Jeonbuk are eight points behind Ulsan and just three ahead of Pohang Steelers meaning a win over Seoul will be seen as essential. FC Seoul, meanwhile, will be bruised from the Super Match loss to Suwon on Sunday. An Ik-soo's men will be keen to return to winning ways but haven't beat Jeonbuk since July 2017.
Daegu FC's damaging defeat to Pohang on Saturday saw them slip to second bottom of the league. This Wednesday the Sky Blues take on basement side Seongnam FC. The Magpies picked up an impressive win over Ulsan last time out to narrow the gap between themselves and Daegu to just four points. A win on Wednesday and the great escape might well be on.

Suwon FC versus Pohang Steelers and Jeonbuk Hyundai Motors versus FC Seoul have been chosen by K League's overseas broadcast partners. Check local listings for details.
Alternatively, follow all the action LIVE, for FREE and in HD on TV.KLeague.com.