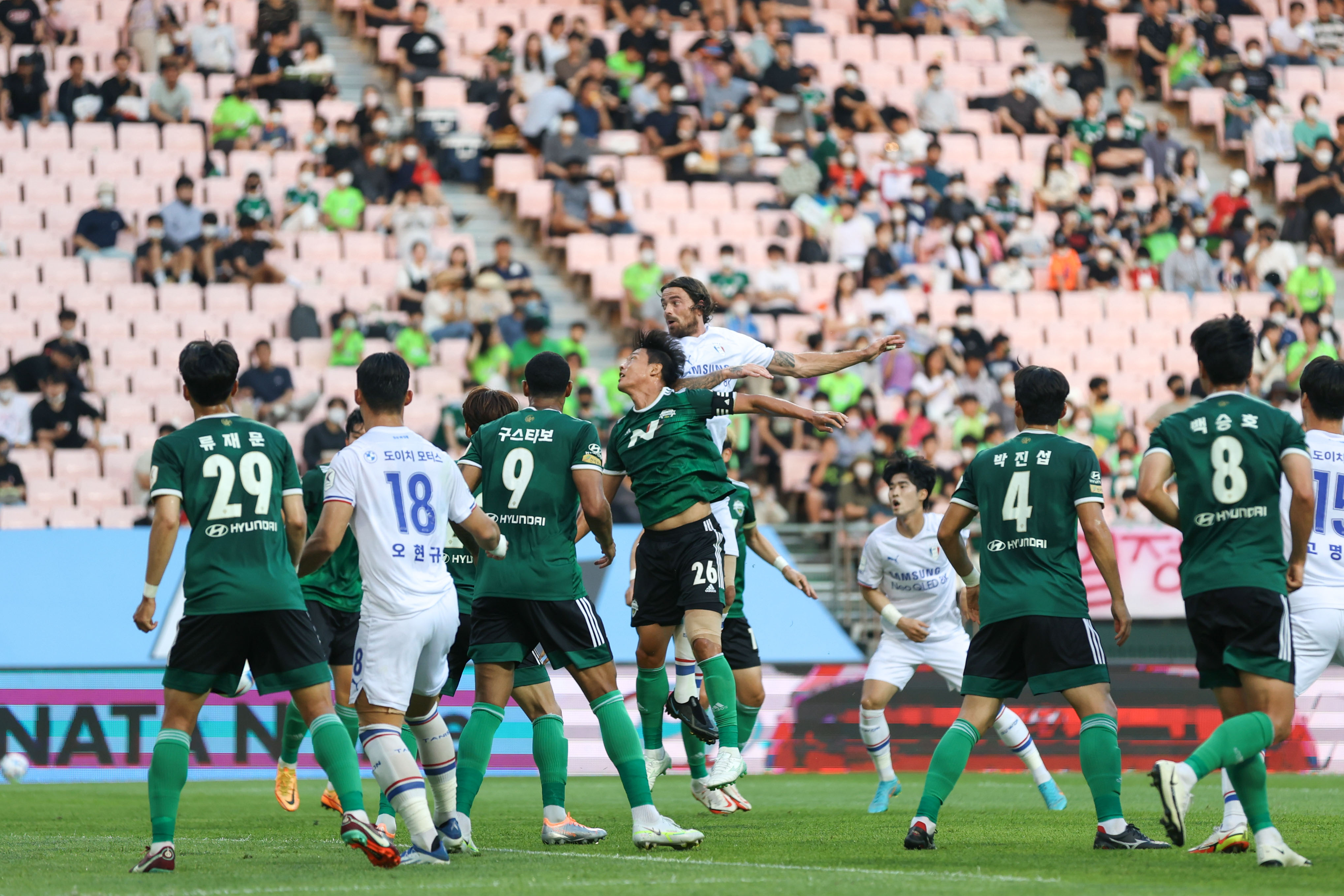 It's Round 33 of the 2022 Hana 1Q K League 1 season meaning it's the last round before Final A and B. Suwon Samsung Bluewings are at home to Jeonbuk Hyundai Motors looking to pull away from the bottom three, Suwon FC are away to Ulsan Hyundai but know that a point might just seal a place in the top six, and Cesinha and Daegu FC entertain FC Seoul looking to try and move out of the drop zone.
All matches kick off at 3 PM KST on Sunday. 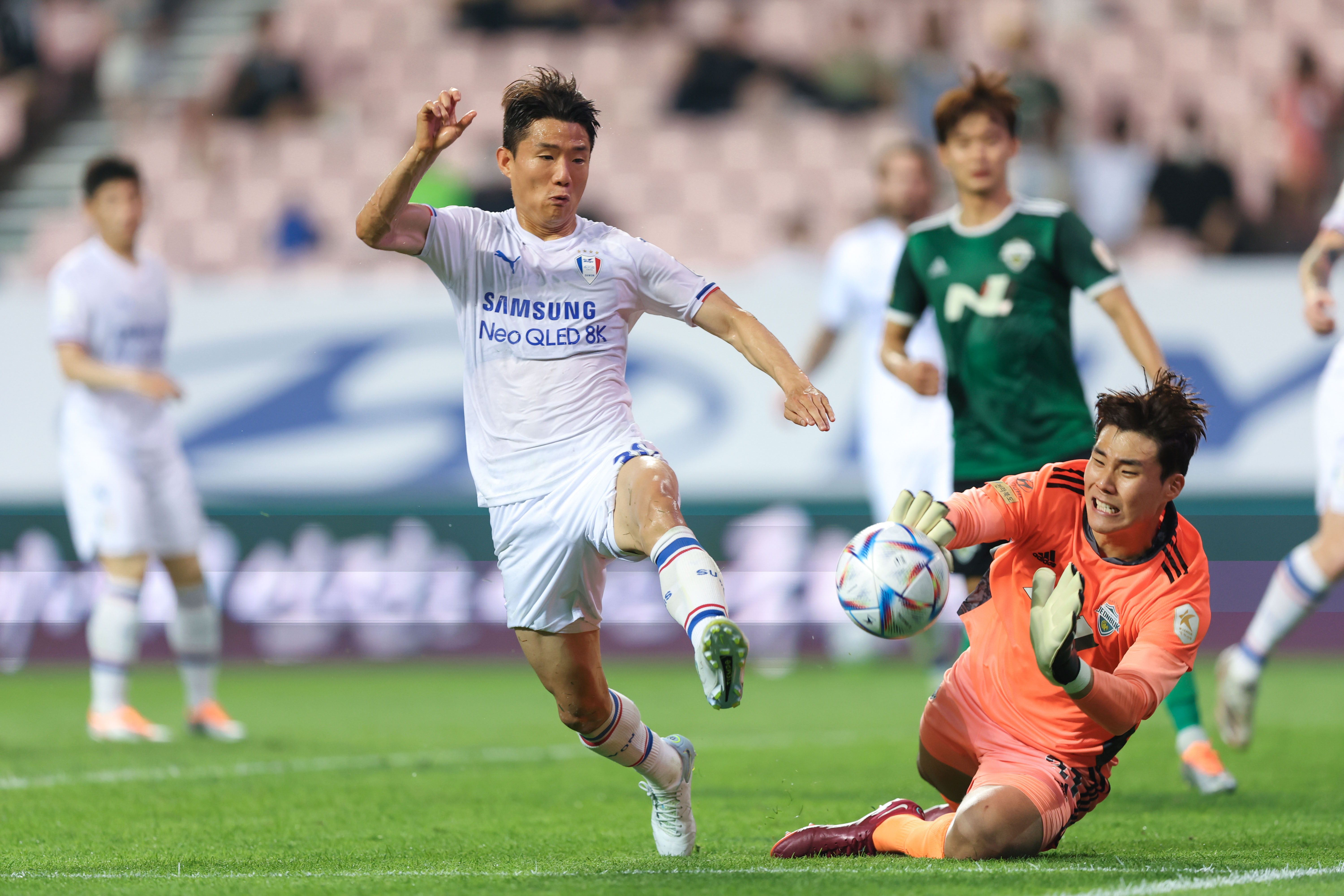 Suwon Samsung Bluewings are not safe from relegation and Jeonbuk Hyundai Motors, while they have managed to narrow the gap to five points, still have work to do in retaining their K League 1 title. The two sides meet this Sunday for what will be an important match for both. Suwon lost to Pohang in midweek leaving Lee Byung-keun's side with just one win in five. Jeonbuk, meanwhile, picked up back-to-back wins - the first a 5-0 thrashing of Daegu FC which was followed by a narrow 1-0 victory over Seongnam. Having been 10 points behind Ulsan just a few weeks ago, Kim Sang-sik and his players will have the belief that the Horangi can be caught.
The Green Warriors will also take confidence in knowing that they've won the last five meetings with the Bluewings in all competitions. In terms of team news, Jeonbuk will continue to be without Hong Jeong-ho and Song Min-kyu due to injury. Kim Sang-sik will also be able to get by the U22 rule due to a couple of his players currently on international duty with the Korea U20 team and so it is likely to be a similar XI to the one that beat Daegu and Seongnam. However, Maeng Seong-ung is suspended having received a fifth booking of the season on Wednesday night. The Bluewings don't have any players ruled out through suspension but Jeong Seung-won and Lee Jong-sung are both just one booking away from a one-match ban. 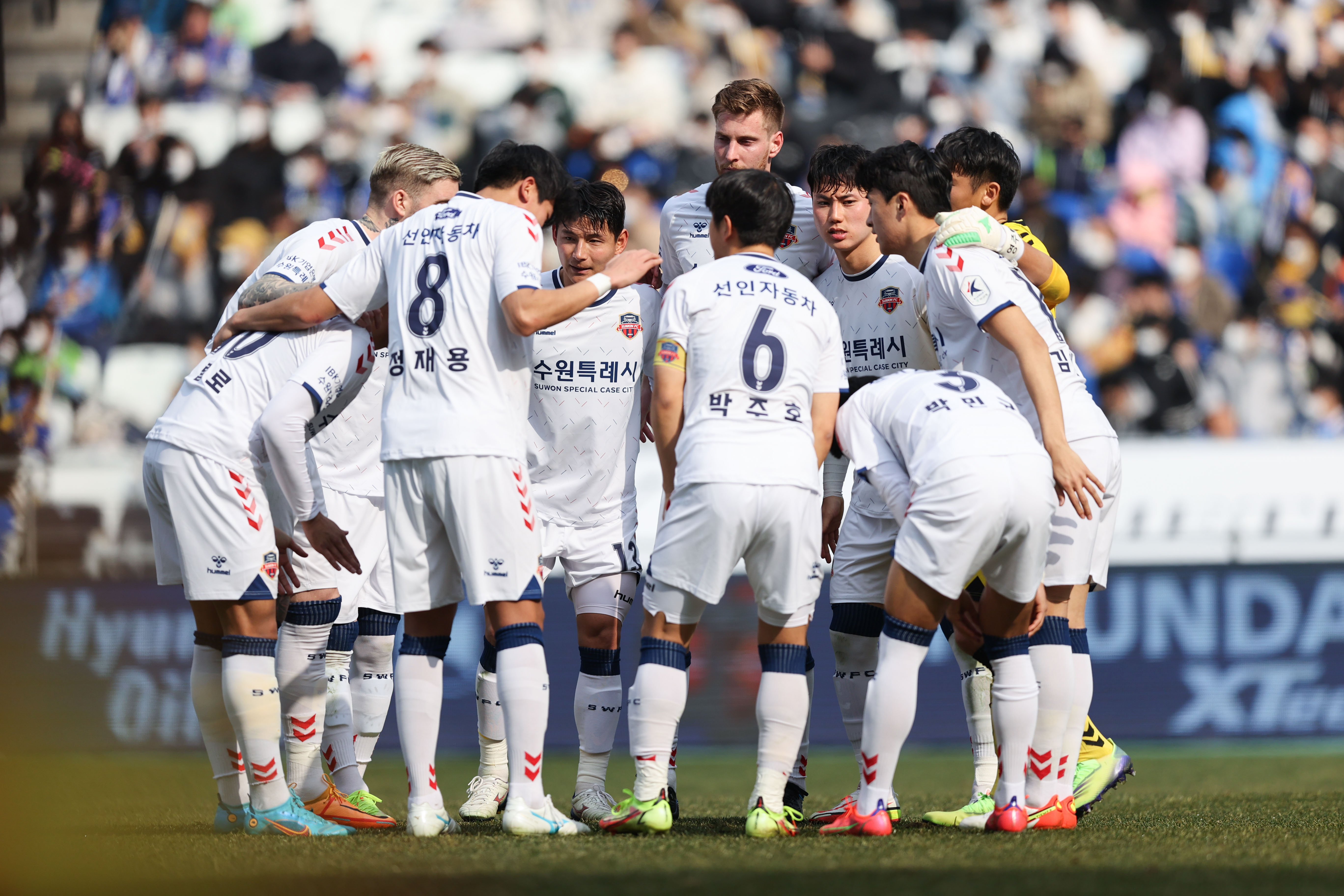 A Lee Seung-woo brace and three points against Gimcheon Sangmu on Tuesday mean that Suwon FC are in the driving seat for sixth place. Kim Do-kyun's side are now two points clear of Gangwon FC and have the superior goals scored tally of 51 to 45 meaning that, realistically, a point ought to seal it. Interestingly, Suwon are the only team in the division to have a goal difference of zero having shipped just as many goals as they have scored - 51. The team's scoring charts are led by Lee Seung-woo with 13 and Kim Hyun with eight but have eight players who've scored one goal and five others who've scored more than one. This has enabled Suwon to be the division's top scorers. Up next for Suwon FC is Ulsan Hyundai away and, after two 2-1 defeats in this fixture this term, will be seeking a winning change. Ulsan are to be without goalkeeper Jo Hyeon-woo due to injury but will have Lee Chung-yong back from suspension. Suwon have to players serving one-match bans, striker Kim Hyun and defender Lee Yong.
[READ: Interview with Suwon FC's Lee Seung-woo] 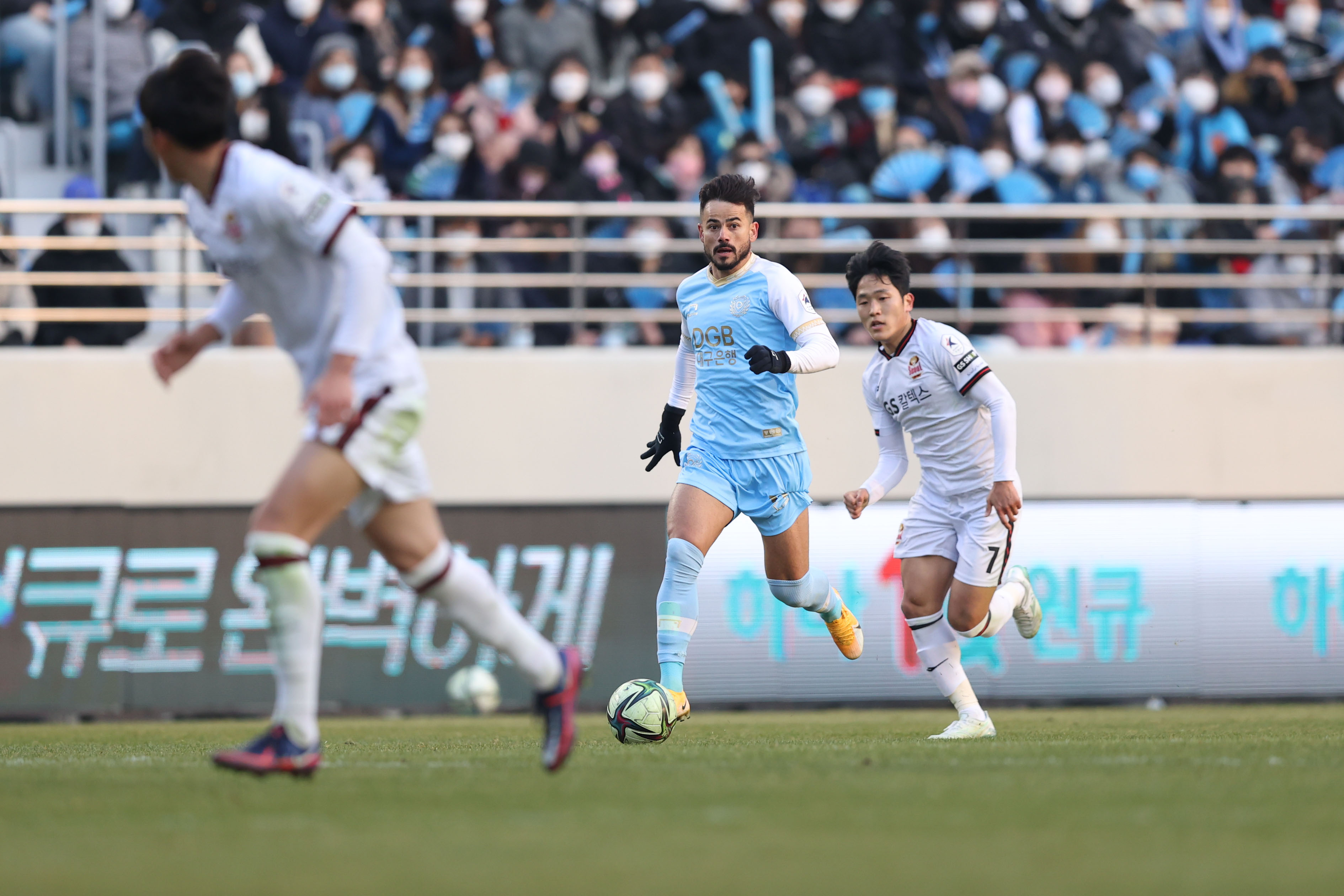 A trademark Cesinha stunner got Daegu FC's comeback up and running on Tuesday night. Trailing 2-0 away to Jeju, the Brazilian ace sent in a beautiful, curling effort into the top corner. It was his seventh goal of the season to bring him just two shy of last year's total of nine. The goal was also his first since August and just second since May with the now club captain having had back luck with injuries. But, with Daegu struggling at the wrong end of the table, caretaker manager Choi Won-kwon will be looking to the 32-year-old to inspire the team to victory this weekend. Daegu take on FC Seoul, a side that did have top six aspirations but now need to win and score 14 goals in order to finish in Final A due to their inferior goals scored tally. A win this time around would be most welcome as the Sky Blues fight relegation. Daegu will be without centre back Hong Jeong-un due to suspension while Seoul will have to do without the services of Stanislav Iljutcenjko who picked up his fifth yellow of the season last time out.

Elsewhere in K League 1 Round 33

The league's basement side Seongnam FC are at home to Pohang Steelers. The Magpies know that anything less than a win could widen the gap between themselves and the playoff places to 10 points. Pohang, meanwhile, will be looking to strengthen their grasp on third place with a third straight win. Seongnam will have midfielder Kim Min-hyuk unavailable due to suspension while Pohang will have to seek other options to Alex Grant.
Gangwon FC are at home to Jeju United and need to win if they are to stand any chance of finishing in the top half. Choi Yong-soo's side also need Suwon FC to drop points while Nam Ki-il's Jeju are seeking a second win in five to get their pursuit of the AFC Champions League places back on track. They will, however, have Jin Seong-wook unavailable for selection due to suspension.
And Incheon United make the long trip to North Gyeongsang knowing that their place in Final A is secure. They take on a Gimcheon Sangmu side that has lost its last two and sits second bottom of the table.
[READ: 2022 K League 2 Round 40 Preview] 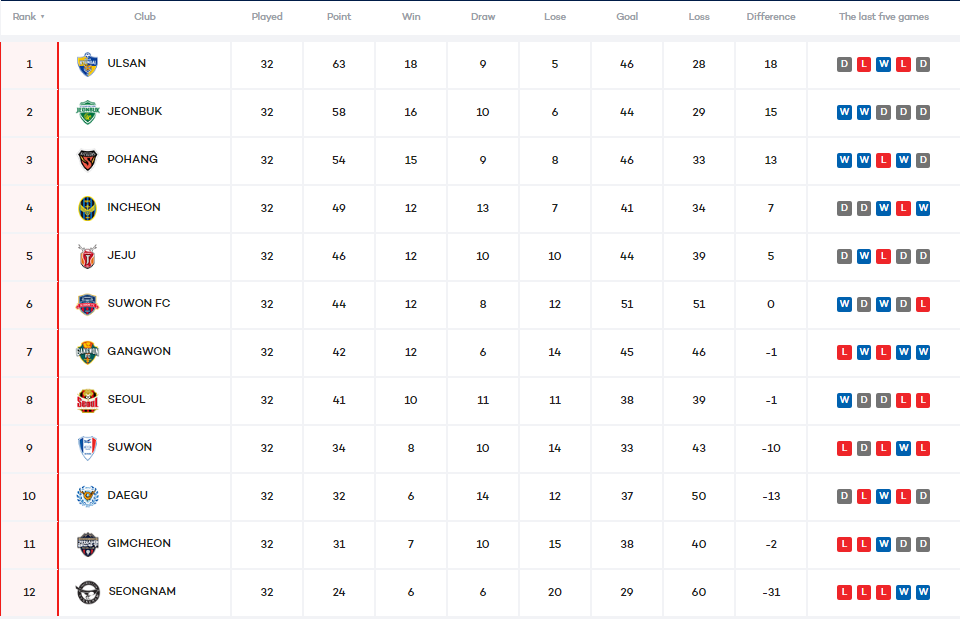 Suwon Samsung Bluewings versus Jeonbuk Hyundai Motors as well as Daegu FC versus FC Seoul are the matches picked for overseas broadcasting.
Alternatively, follow all the action LIVE, for FREE, and in HD on TV.KLeague.com.