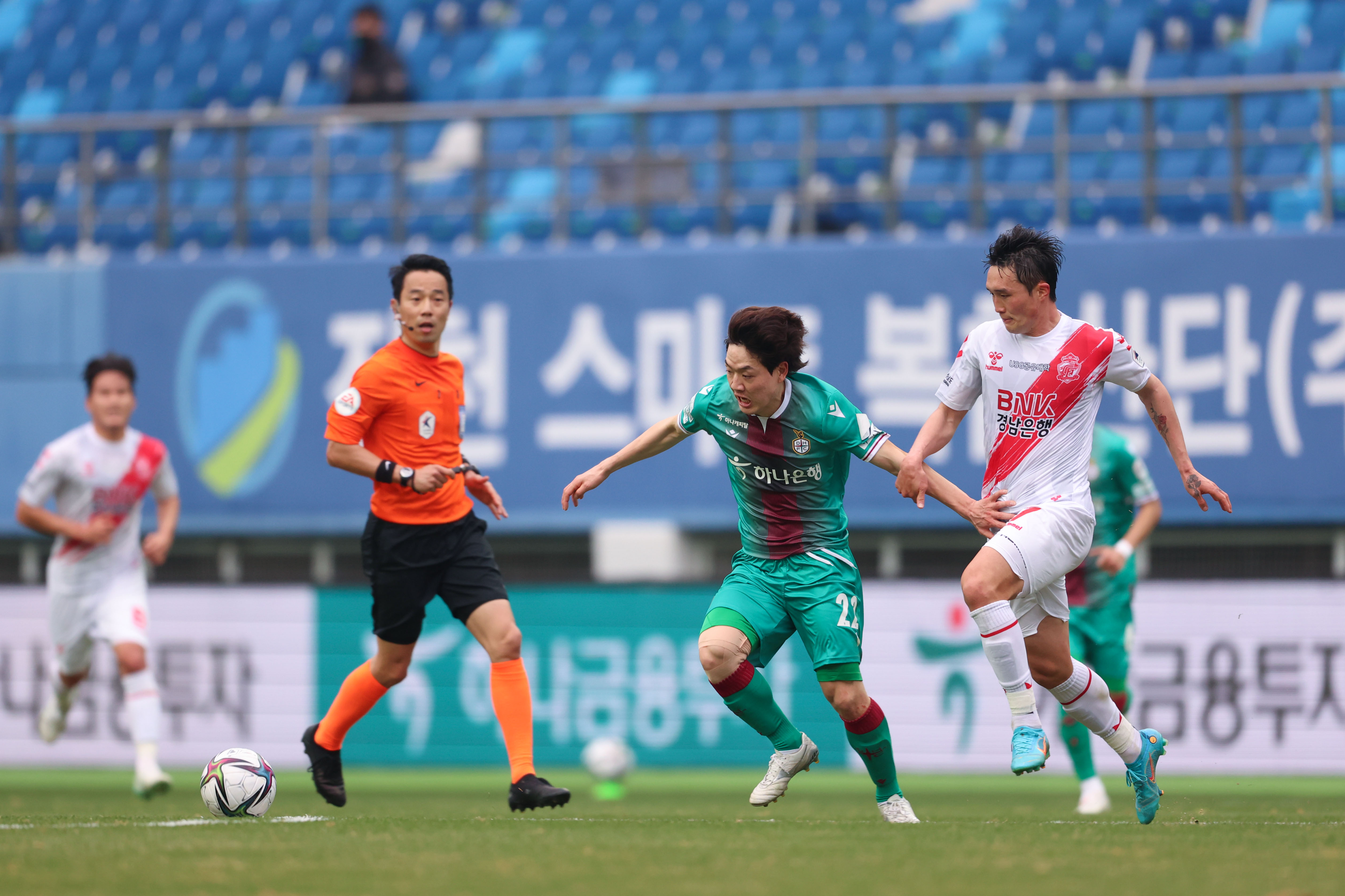 There are just four rounds to go now in the second tier as the 2022 Hana 1Q K League 2 campaign reaches round 44. In the pick of the action there's a playoff clash on Sunday when Daejeon Hana Citizen take on Gyeongnam FC, newly-crowned champions Gwangju FC are at home to Ansan Greeners, while playoff contender Bucheon FC 1995 and Nilson Junior take on Gimpo FC. 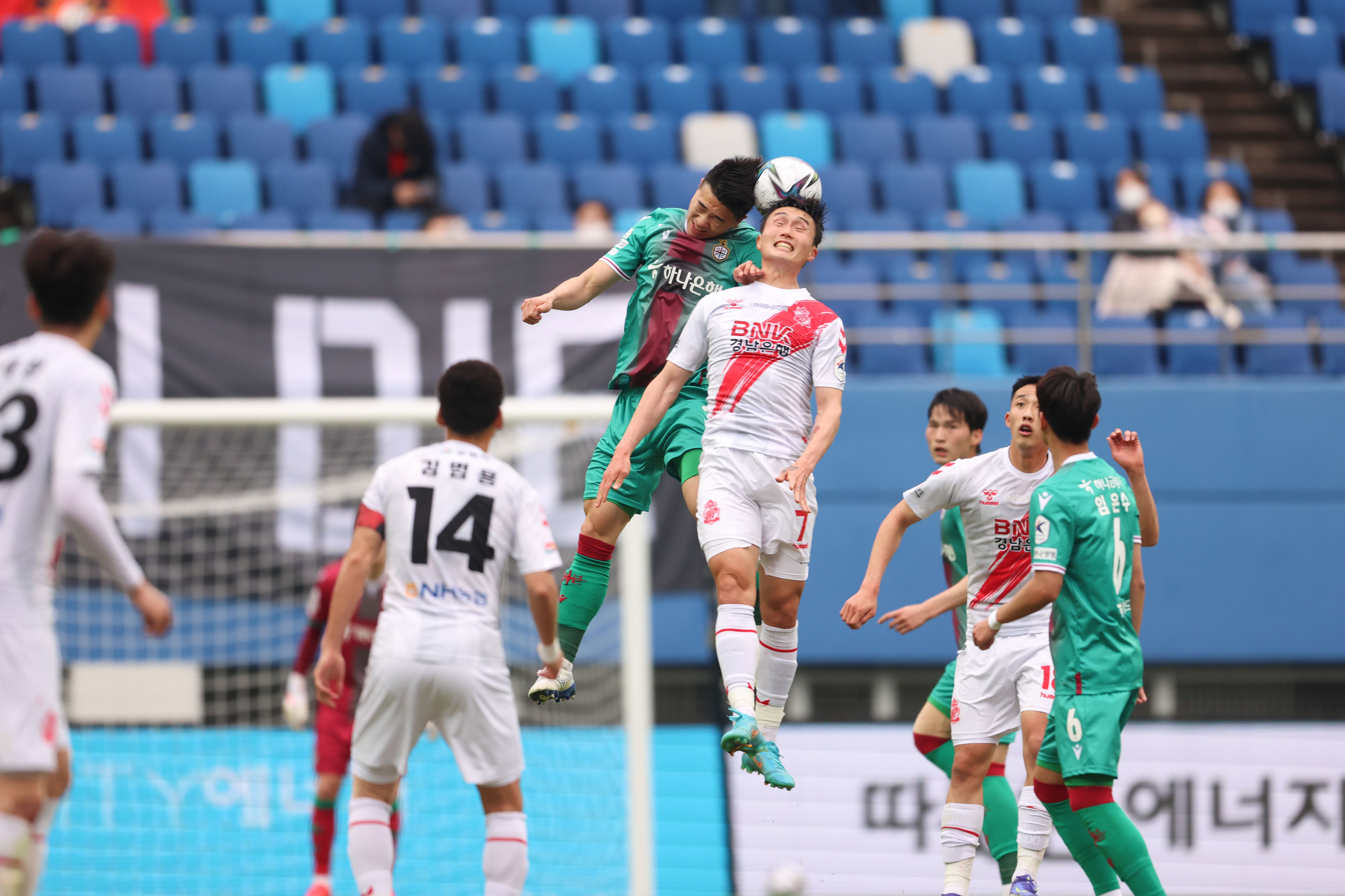 There are playoff implications for both Daejeon Hana Citizen and Gyeongnam FC. Both were in action in midweek, too, taking to the field in the rescheduled Round 28 fixtures. Both picked up wins too and both by a goal to nil. Daejeon's came away to FC Anyang, a crucial win which, given the Purples have a game in hand over the Violets, means that finishing second is in Daejeon's hands. Gyeongnam's win was against Seoul E-Land and was enough to put them back in fifth, two points clear of their main playoff rivals Chungnam Asan.
With the playoffs looming and both teams sitting tentatively in the top five, the task at hand will be simple. For Daejeon, they need to win all their remaining games to guarantee second place. Similarly, Gyeongnam need to win their matches to make sure fifth spot is theirs. The head-to-head between the two teams this season has been dead even - one win, one draw, one loss each. Daejeon won 4-1 back in March, helped in part by a Masa hat-trick, before the two teams played out a 1-1 draw in May. The most recent meeting ended in a 2-1 Gyeongnam win in Changwon after goals from Tiago and Ko Myung-min turned the game on its head.
Both teams will be expected to shoot on sight of goal. Gyeongnam, too, are the league's most accurate shooters with 41.3% of all shots finding the target while Daejeon sit third for shots per 90 minutes at 11.86.  In terms of team news, Daejeon will be without captain Cho Yu-min due to his national team commitments


Team of the Round 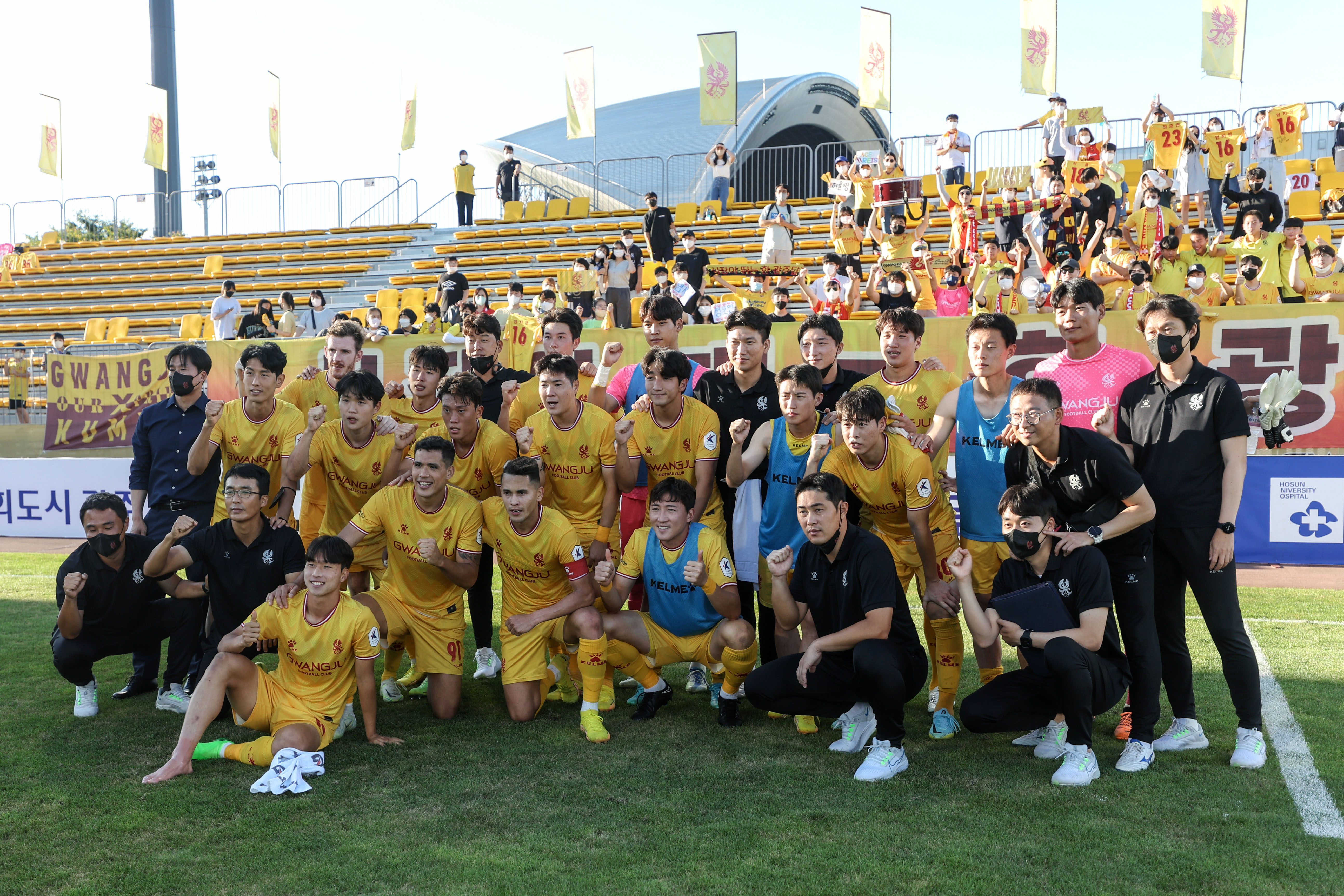 Champions Gwangju FC will take to the field this Monday night for the first time since sealing promotion back to K League 1. Gwangju seal the title with four games to spare after a dominant campaign. Lee Jung-hyo's men have lost just four matches this term and have won 23 out of their 36 matches, six more than Anyang, Daejeon, and Bucheon. They're also the league's top scorers with 59 and have the best goal difference of +29, 12 more than their nearest rivals in that regard, Daejeon. In Round 41 Gwangju are at home to Ansan Greeners, a side that sits eighth in the table and is on a run of three matches without victory. The three previous meetings between these two sides in 2022 have resulted in two Gwangju wins and one draw with three cleansheets. 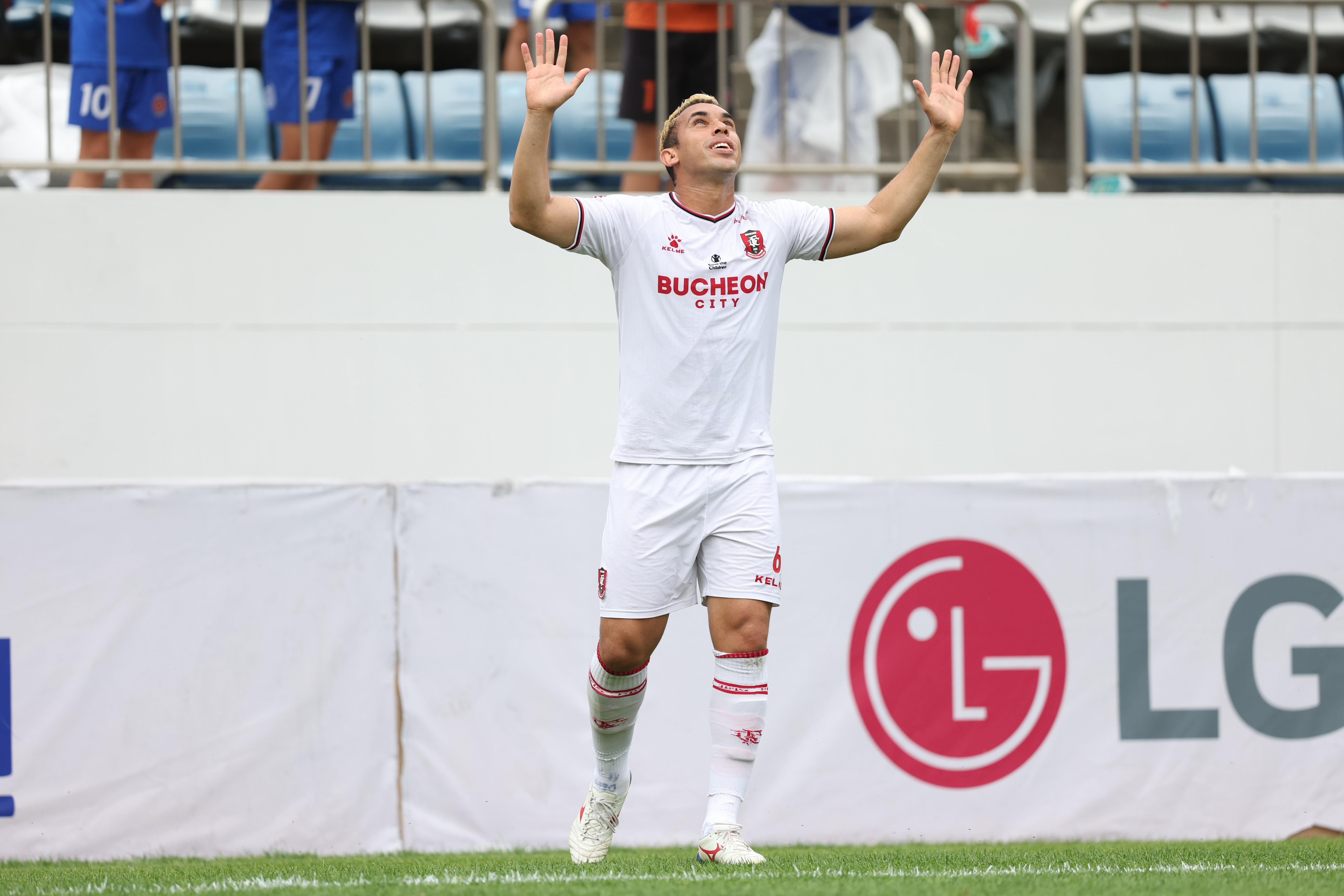 Looking to keep Bucheon FC 1995's pursuit of third place on track is Brazilian defender Nilson Junior. Now in his second spell with the club, the Brazilian has been an important player at both ends of the pitch. The former Busan and Anyang man has two goals in his last three matches and three in his last five. He was on the scoresheet last time out as Bucheon ran out 3-0 winners, grabbing the game's opener in the 10th minute. That took his tally for the season to seven. At the other end of the pitch, Nilson Jr. is third for interceptions in K League 2 this season with 205, second for blocks, and is fifth for through passes. Up next is Gimpo FC at home this Saturday, a side that is on a run of seven matches without victory.

Elsewhere in K League 2 Round 41

There'll be playoff implications in Seoul E-Land's home fixture with FC Anyang but perhaps not in the way that the Leopards will have wanted. After winning four in a row and going unbeaten in five, Seoul E-Land put themselves in the race for the playoffs. But, following the midweek loss to Gyeongnam, the Seoul are now eight points adrift. Anyang, though, are headed for a third playoff campaign in their last four seasons but, like Seoul E-Land, have hit a sticky patch of form. Anyang are now three matches without a win and have played one game more than their rivals for second place, Daejeon Hana Citizen. Anything less than a win against Seoul E-Land, then, could prove fatal.
Meanwhile, at the bottom end of the table there's the battle to avoid finishing 11th. Jeonnam Dragons in 10th take on Busan IPark in 11th this Monday night. Jeonnam have played two games fewer than Busan and so know that it is in their hands to finish above Busan. Two rounds ago Jeonnam ended a 20-match winless run by putting seven past Gimpo FC and then drew 1-1 with promotion hopefuls Daejeon Hana Citizen last time out. Busan, meanwhile, have one win in five and might just see the clash with Jeonnam as one of their last chances to move away from the foot of the table. 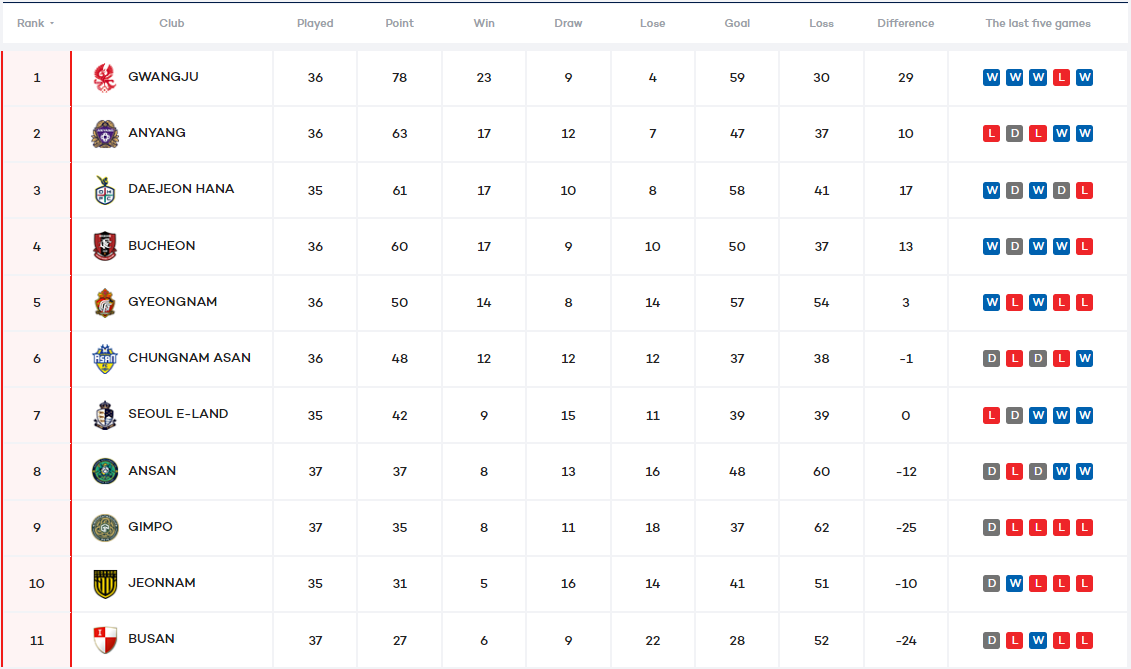