The 2022 K League 2 season is done and dusted. Gwangju FC go up as champions, and following them are Daejeon Hana Citizen who beat Gimcheon Sangmu in the Promotion-Relegation Playoffs. We look back at the season and what it meant for each team in the second tier.

Gwangju FC sealed an instant return to K League 1 after winning the 2022 K League 2 title. Under the stewardship of Lee Jong-hyo, who was managing at K League level for the first time, the Griffins finished the campaign 12 points clear of Daejeon Hana Citizen in second. The title was actually sealed with four matches to spare and with a record number of points with 86. It was Gwangju's third promotion and second second-tier title, the most recent was 2019. Gwangju lost just four matches all season, half as many as runners-up Daejeon who had the second-fewest. Lee Jung-hyo won the Manager of the Year Award while centre back Ahn Young-kyu was named as MVP and winger Eom Ji-sung won Best Young Player.

Daejeon Hana Citizen won promotion to K League 1 following a 6-1 aggregate win over Gimcheon Sangmu in the Promotion-Relegation Playoffs. The first leg at Daejeon World Cup Stadium on October 26th ended in a 2-1 win for the Purples before a 4-0 victory in the second leg three days later. It was Daejeon's second promotion in their history and ensures a return to the top flight for the first time since 2015. Daejeon also ended the season as the division's top scorers with 71 goals. Captain Cho Yu-min was named in the Best XI, as too Brazilian attacker Willyan.

FC Anyang came closer than ever before to winning promotion and were 30 seconds away from a penalty shootout in the Promotion-Relegation Playoff. The Violets held Suwon Bluewings to a 0-0 draw in the first leg at home on Wednesday 26th October and even found themselves on level terms in the second leg too after Maxwell Acosty's header in the 55th minute cancelled out An Byong-jun's 17th-minute opener. However, in the 120th minute, Oh Hyeon-gyu struck to break Anyang hearts. It was Anyang's third playoff campaign in the last four seasons and with 69, their best-ever K League points haul and points per match average (1.725). The Violets had seven players nominated for the Best XI, including Acosty who finished the year as the division's top assist maker.

The Reds competed in the playoffs for the third time in their history but lost to Gyeongnam FC in agonising fashion thanks to a late Tiago Orobo goal in the dying embers. A fourth-place finish for Bucheon FC 1995 was their best since 2019 and joint-second best overall. It was quite the turnaround from last year before when Bucheon finished bottom of the table and third-from-bottom the year before. Manager Lee Young-min was nominated for the Manager of the Year Award, while Choi Cheol-won, Cho Hyun-taek, Park Chang-jun, Nilson Junior, and Lee Si-heon were nominated for the Best XI. 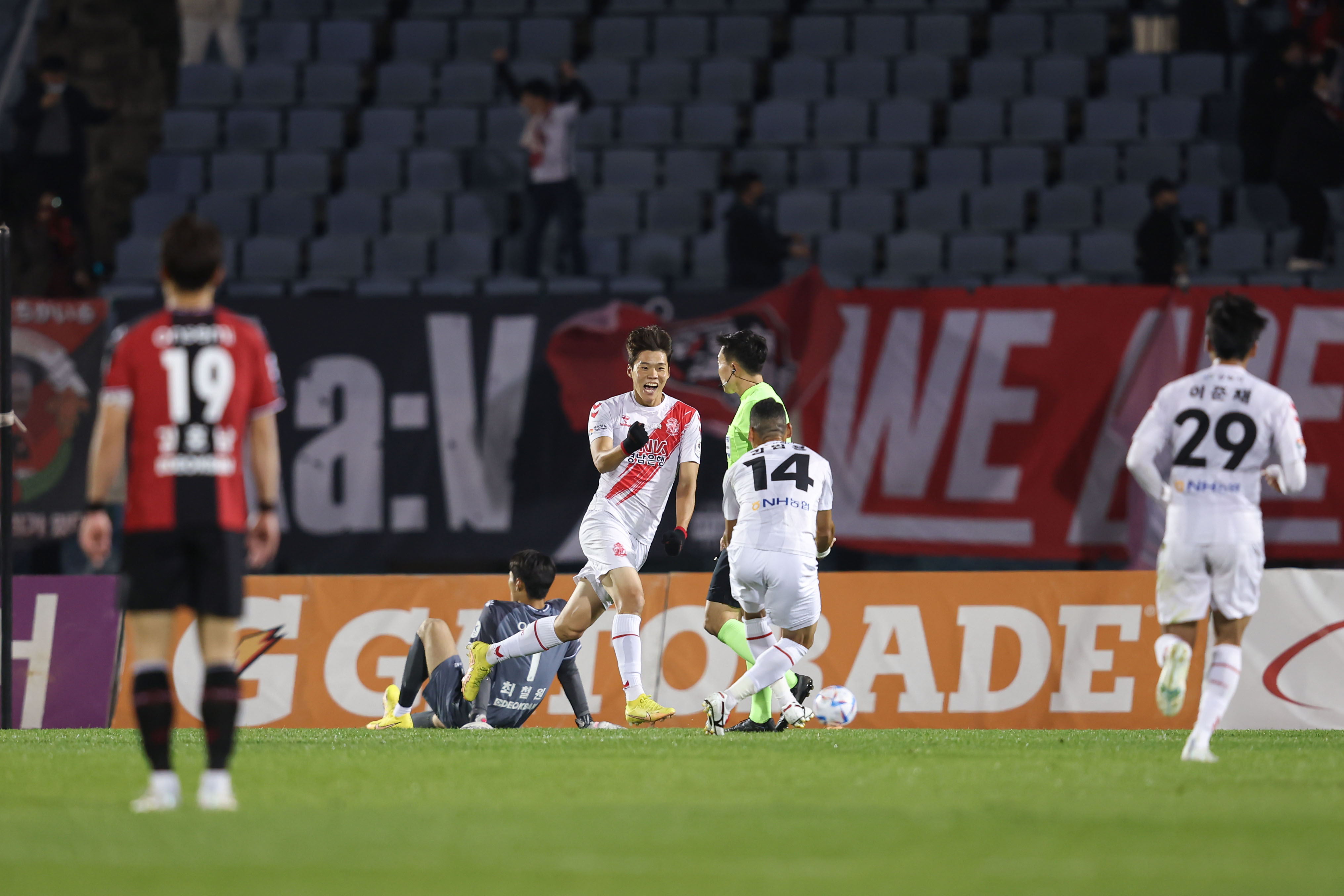 Gyeongnam FC reached the playoffs for the second time in three years but were knocked out by FC Anyang in the promotion final. With the home team only needing a draw, the 0-0 stalemate away to FC Anyang brought their season to an end. However, the Roses were able to record their first-ever win in the playoffs by beating Bucheon 3-2 in the semifinals. Fifth is an improvement on last year's sixth place and the second-best since returning to the second tier in 2020. The departures of Willyan to Daejeon and Hernandes to Incheon will have been mitigating factors for Seol Ki-hyeon but Tiago Orobo had an excellent first season in K League scoring 18 goals and coming very close to winning the golden boot.

Chungnam Asan very nearly qualified for the playoffs in what was a best finish for the team since the re-brand and name change after finishing eighth in 2021 and 10th in 2020. The Owls were sat perched in the playoff places for much of the season, too, first breaking into the top five after Round 12 in April all the way up until Round 33 in August and even moved up to fourth place for a couple of weeks. Striker Yoo Kang-hyun finished the season as the division's top scorer with 19 and as the MVP. The solid showing was enough for manager Park Dong-hyuk to earn a new contract. 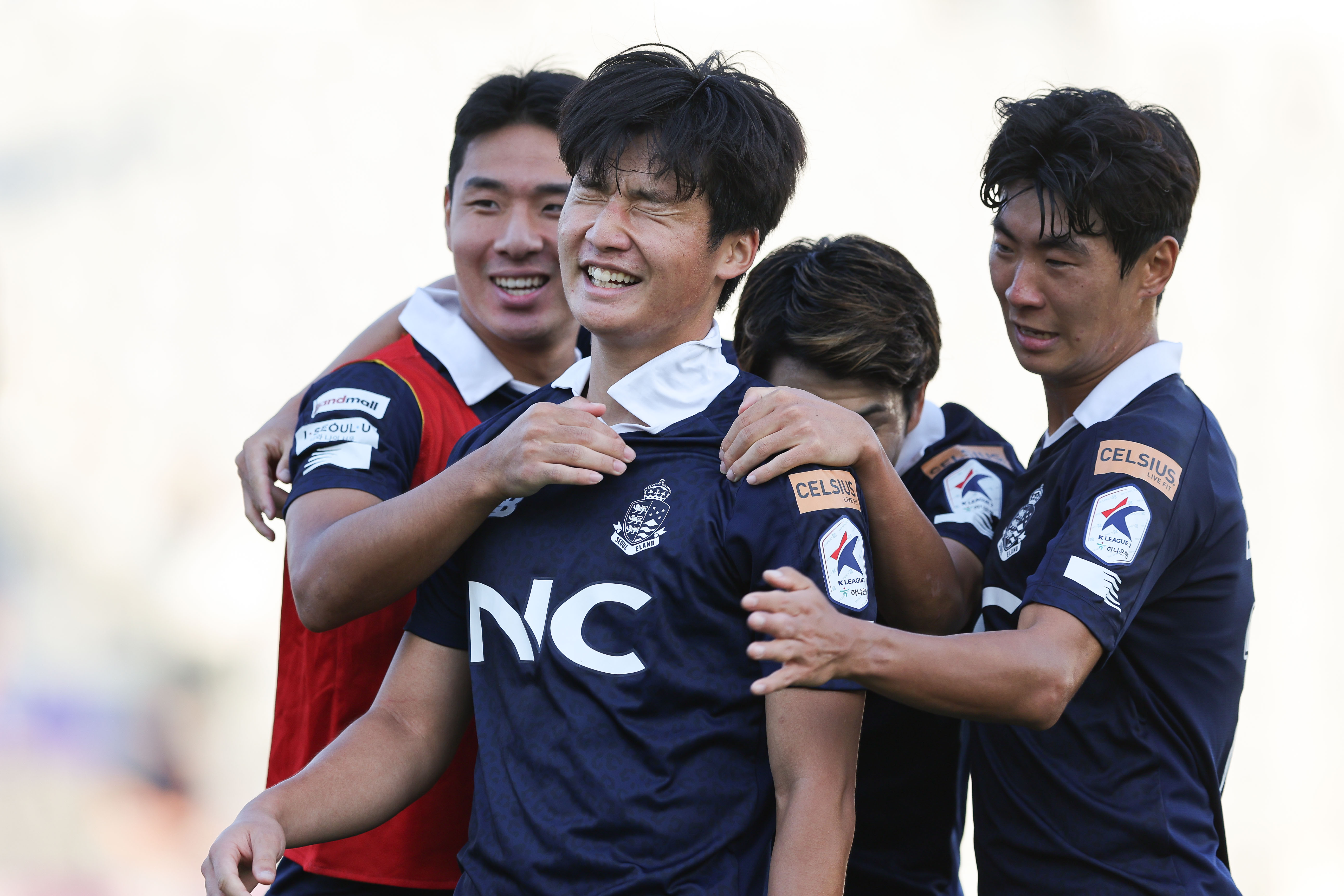 Seoul E-Land mounted a late push for the playoffs by putting together a run of six wins from eight from late August to early October. In the end, the Leopards had to settle for seventh but may take some solace in knowing that they were able to record their second-best finish to a season since reaching the playoffs in their debut year in 2015. Kim Jung-hwan, Lee Dong-ryul, and Felipe Cadenazzi were all nominated for the K League 2 Best XI. The latter was the team's top scorer with 10 goals in what was his first season in K League.

Gimpo FC's first-ever season at K League level proved to be a productive one, finishing eighth and well clear of the battle to avoid the so-called "wooden spoon" that is last place. Their first win came on opening day, defeating eventual champions Gwangju FC 2-1. Of Gimpo's 10 wins in the league in 2022, six came away from home - including the win over Gwangju. Gimpo also recorded scalps over Bucheon, Chungnam Asan and Gyeongnam - all teams that finished above them in the table. Yun Min-ho and Son Suk-yong ended the campaign as joint-top scorers for the club with eight, both were nominated for the K League 1 Best XI.

Ansan Greeners end the season in ninth place. The Green Wolves have finished in ninth twice before - 2017 and 2018. Like other teams in K League 2 in 2022, Ansan had a change of manager. Cho Min-gook left and in came Lim Jong-heon. Choi Geon-ju ended the season as the club's top scorer with seven. But Brazilian winger Róbson Duarte provided the most goal contributions with 11, four goals and seven assists. Meanwhile, Indonesian star Asnawi Mangkualam, who was in his second season in K League, scored two and assisted two, progress from the one assist the wing back recorded last year.

Busan IPark endured a tough 2022 campaign by recording their lowest-ever K League finish but did manage to avoid ending the year at rock bottom of the table. The Royals had been sat in 11th from Round 27 to Round 43 but a 1-0 win over Seoul E-Land on the final day, coupled with Jeonnam Dragons' draw with Bucheon, saw them move up to 10th. Busan had a change of manager mid-way through the campaign with Ricardo Peres departing and former Gwangju and FC Seoul boss Park Jin-sub coming in. Lee Sang-heon was the team's top scorer with seven and with three assists, provided the most goal contributions in the team - it was the best return in front of goal of his career.

Jeonnam Dragons record their lowest-ever finish to a season by ending the campaign in 11th. The Dragons had a change of manager too with Jeon Kyung-jun departing and in coming Lee Jang-kwan. Jeonnam won six league matches, three home and three away including a 7-1 demolition of Ansan Greeners which brought a 20-match win-less run to an end. Jeonnam, having won the FA Cup in 2021, entered the AFC Champions League Group Stage and came close to making the knockout stages. Park In-hyeok, who joined from Daejeon over the winter, along with Jonathan Balotelli ended the team's joint-top goal scorers with seven, Leonard Pllana was second with six goals. Lim Chan-wook picked up the most combined goals and assists with 10, five of each.
[READ: 2022 Hana 1Q K League 1 Final B Season Review]
다음 글 2022 Analysis: Expected goals in K League 1
이전 글 2022 Hana 1Q K League 1 Final A Season Review
K LEAGUE