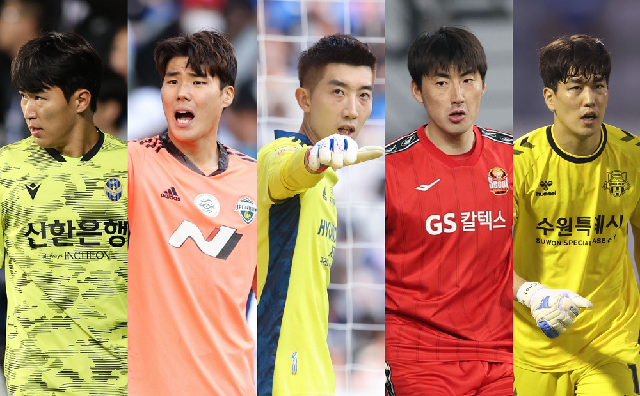 With the year coming to a close, it's time to take a look back at some of the standout performers in K League. Starting with the goalkeepers, we look at the top three performers in an array of categories from total saves and prevented goals to punches and catches.
The last line of defence, an iron wall, and, quite often, the difference in a team winning or losing. K League is spoilt for choice in terms of standout goalkeepers. Some went to the World Cup in Qatar, others were unlucky not to but all are appreciated by the clubs.

Naturally, some goalkeepers will be busier than others. Their teams might cede position more than others, some might just not have the strongest of defences in front of them. The result will be similar in that they will face more shots and, therefore, be needed to make more saves.
FC Seoul's Yang Han-been sits top of the total saves table with 106 which works out at just over three per 90 minutes. Yang also performed well in terms of cleansheets with nine from 35 matches which was the fourth-best in K League 1.
Behind Yang is his namesake Yang Hyung-mo of Suwon Samsung Bluewings and Oh Seung-hoon of Daegu FC who both made 103 saves. Yang's eight cleansheets was enough for him to sit eighth in the division while Oh's nine put him in sixth.
Rounding off the top three is Kim Dong-jun who made 98 saves for Jeju United from three games fewer than his contemporaries in this category.
1. Yang Han-been, FC Seoul (106)
2. Yang Hyung-mo, Suwon Samsung Bluewings (103)
2. Oh Seung-hoon, Daegu FC (103)
4. Kim Dong-jun, Jeju United (98)

The top three for saves per 90 minutes looks a bit different, however. This metric shows exactly which custodians were the busiest, on average, in matches that they played. What can skew this stat is that players with a low number of appearances will rank near the top. But, the table-topper in this one is Gimcheon's stopper Hwang In-jae who needed the season as the army team's first choice. Hwang, who will return to Pohang at the end of this year, with 16 appearances, made 3.79 saves per match on average. Behind him was Yoo Hyun with 3.56 from 11 appearances, while Incheon's Lee Tae-hui 3.55 from 12 appearances.
The trio's cleansheet records perhaps showed how busy they actually were as Hwang managed three (18.8% of games), Yoo Hyun two (18.2%), and Lee Tae-hui two (16.7%).
1. Hwang In-jae, Gimcheon Sangmu (3.79)
2. Yoo Hyun, Suwon FC (3.56)
3. Lee Tae-hui, Incheon United (3.55)

All K League games are on television or streamed online so it's not as if some 'keepers are pulling out the acrobatic saved for the cameras. For some, it comes naturally. Hwang In-jae, for instance, who as we have already seen was one of the busiest 'keepers, had the best reflex save accuracy at 68.75%, Seongnam FC's Kim Young-kwang, who conceded the most goals in the division with 58, is next at 67.61% while FC Seoul's Yang Han-been makes up the top three with a little of 66%. The most accurate reflex savers were, interestingly, playing in Final B this season.
1. Hwang In-jae, Gimcheon Sangmu (68.75%)
2. Kim Young-kwang, Seongnam FC (67.61%)
3.Yang Han-been, FC Seoul (66.04%)

Prevented goals has one clear winner and that's Incheon United's Kim Dong-heon. Kim took the number one shirt at Sungui Arena Park, both figuratively and literally, and became a key part of Jo Sung-hwan's side that earned a spot in next season's AFC Champions League. He ranked third for cleansheets with nine from 25 matches, which is actually the best percentage among goalkeepers who'd played more than 25 matches at 36%. His prevented goals metric is an incredible 11.04.
Behind Kim are Jo Hyeon-woo with 6.37 whose performances in goal for Ulsan Hyundai helped earn the Horangi a first K League crown since 2005, and Gimcheon's Hwang In-jae at 5.01 who was one of the army team's better performances in the latter half of the campaign, despite relegation. In this metric, Hwang is the only player from Final B whereas Kim and Jo finished in the top four.
1. Kim Dong-heon, Incheon United (11.04)
2. Jo Hyeon-woo, Ulsan Hyundai (6.37)
3. Hwang In-jae, Gimcheon Sangmu (5.01)

Sometimes a 'keeper needs to leave their goalmouth or penalty area in order to make a key intervention. Some are better at timing these onrushes than others. Some goalkeepers do so reluctantly so not to get stuck in "no man's land", while others are keen to show their burst of pace. Whichever category Gangwon FC's Yu Sang-hun falls into will be up to him to say, but he does sit top in K League 1 for leaving his line having done so 69 times and five times more than Seongnam's Kim Young-kwang and six times more than Daegu FC's Oh Seung-hoon.
1. Yu Sang-hun, Gangwon FC (69)
2. Kim Young-kwang, Seongnam FC (64)
3. Oh Seung-hoon, Daegu FC (63)

The phrase a "safe pair of hands" is often used to describe a reliable and steady goalkeeper. Being able to catch the ball is a fundamental skill for any goalkeeper. Some, though, are better at it than others. Kim Dong-jun of Jeju United, for example, who sits top of K League 1 in this record with 55. He made give more catches than Ulsan's Jo Hyeon-woo, and 11 more than Song Bum-keun and Yang Hyung-mo who both made 44.
1. Kim Dong-jun, Jeju United (55)
2. Jo Hyeon-woo, Ulsan Hyundai (50)
3. Song Bum-keun, Jeonbuk Hyundai Motors (44)
3. Yang Hyung-mo, Suwon Samsung Bluewings (44)

In an ideal world, you'd want to get a firm grip on the ball and bring it into your chest and into safety but that's not always possible. In some situations, such as a crowded box or when you want to try and get the ball back up field as quickly as possible, punching is the best thing to do.
There isn't an awful lot separating the top three for punches but FC Seoul's Yang Han-been is first with 58, Daegu's Oh Seung-hoon second with 56, and Suwon Bluewings' Yang Hyung-mo is third with 54.
1. Yang Han-been, FC Seoul (58)
2. Oh Seung-hoon, Daegu FC (56)
3. Yang Hyung-mo, Suwon Samsung Bluewings (54)

The opposition win a corner as a last throw of the dice, their fans sense that this might be the moment their team finally gets on the scoresheet. But your goalkeeper rises up above everyone else in a congested penalty area and calmly clears the ball to safety. There's a sigh of relief and the feeling that the game is yours now.
Jeonbuk and Daegu fans will have had this feeling more than others judging by how many aerial claims Song Bum-keun and Jo Hyeon-woo made this season. With 35, they're top but only just as both Kim Dong-jun and Yu Sang-hun are joint third with 34.
1. Song Bum-keun, Jeonbuk Hyundai Motors (35)
1. Oh Seung-hoon, Daegu FC (35)
3. Kim Dong-jun, Jeju United (34)
3. Yu Sang-hun, Gangwon FC (34)

While strikers can be judged on their xG, or expected goals, goalkeepers can be judged on their expected goals xGC conceded, or expected goals conceded.
Incheon United's Kim Dong-heon had an xGC of 29.35 in the league last season but only conceded 22, that's a difference of 7.35 - the best among the goalkeepers in K League.
Behind Kim is Jeonbuk's Song Bum-keun who has a difference of 6.55 from an xGC of 40.55 and just 34 actual goals conceded.
Rounding off the top three is Jo Hyeon-woo with 2.52 having conceded 33 from an xGC of 35.52. 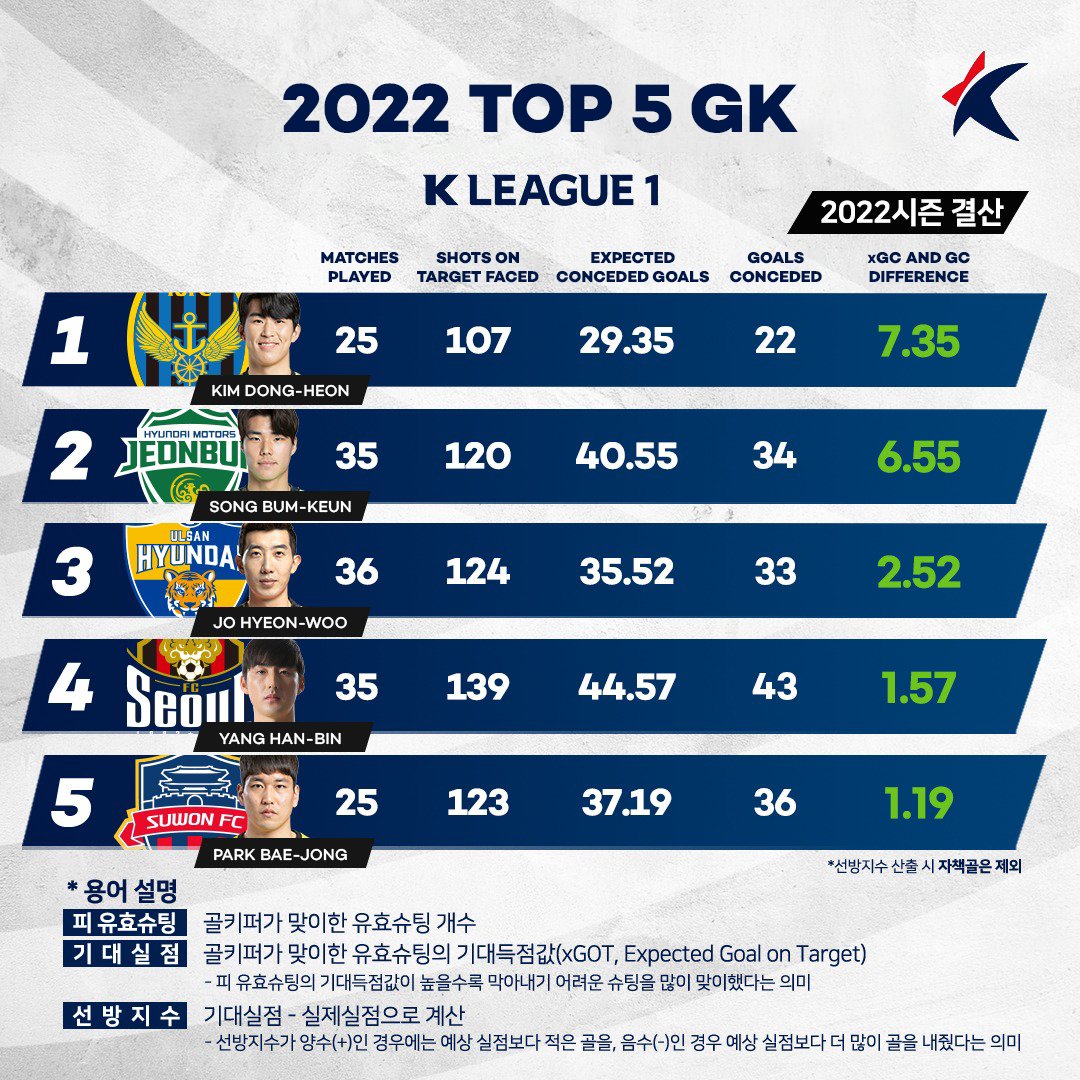