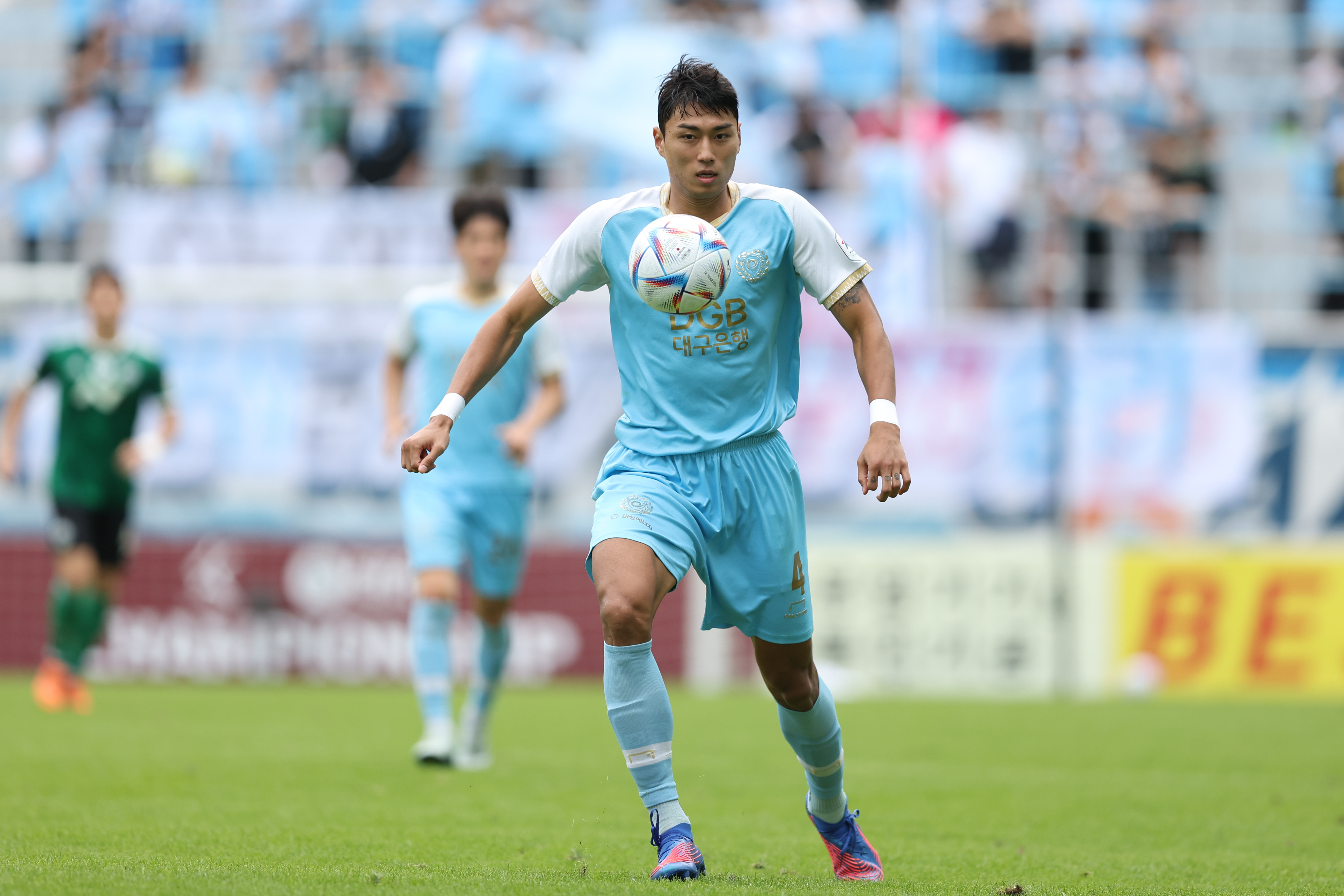 The modern-day centre back is expected to be able to head, tackle, and block shots and try to stop the other team from scoring but also be part of a team's build-up play. Some of today's top centre backs can be seen threading balls through to the final third - K League's best are no exception. We take a look at the top three centre backs in different areas to see who comes out on top.

But first, let's take a look at the defensive side of a centre back's game. Defensive duels are their bread and butter and Kwak Yun-ho of Suwon FC was the best in that regard in 2022. He won 76% of all of his defensive duels to sit second overall, just ahead of Jeonbuk Hyundai Motors' experienced central defender Yun Young-sun who won 75% to sit third overall. What's perhaps most impressive about Kwak Yun-ho is that he was playing in the third tier with Gangneung City just under two years ago. Rounding off the top three is Suwon Samsung Bluewings' Ko Myeong-seok who became a mainstay alongside Dave Bulthuis at the heart of the Suwon defence.

Likewise, a centre back needs to be able to get up and head the ball away. Daegu FC's Jo Jin-woo was the best at that, both as a centre back and overall, winning 71.93% of his aerial duels. Kim Kee-hee of Ulsan Hyundai was second with 70.42% and Jeonbuk Hyundai Motors' Park Jin-seob third with 69.64%. Park started his career as a midfielder but played for Daejeon as a centre back in a three in 2021 and slotted in their with great distinction for Jeonbuk last season - enough for him to earn a place in the Best XI

A team might get pinned back, unable to get out of their own half, or have to face a barrage of crosses into the box. If that's ever the case for Daegu FC, Pohang Steelers, and Suwon Samsung Bluewings , and they have to win aerial duels in their own 18-yard box, then they have the personnel to withstand it.

The modern centre back reads the game well too and can smell danger. Interceptions can also help turn defence into attack. Daegu FC's Jeong Tae-wook made the most interceptions as a centre back last season with 215, followed by Gangwon's ever-reliable Kim Young-bin at 207, and Incheon United's Australian international Harrison Delbridge with 198.

Ideally, you want your team to be able to regain possession and try to work the ball up the pitch and into an attacking situation. Sometimes, this just isn't possible and you have to punt the ball into Row Z or as far away as possible.

Italian football legend Paolo Maldini once said that "If I have to make a tackle then I have already made a mistake." That may be true but the top three sliding tacklers in K League probably won't mind too much if it helped with their cleansheet bonuses.

Incheon United's Kim Dong-min made the most as a central defender, although he did tend to play on the right-hand side of a three and so could be considered a kind of full back. He made 42 tackles, 10 more than Daegu's Lee Jin-yong who was 10th overall but second as a centre back, and Park Ji-soo with 25 who was 22nd overall.

Sometimes, all you can do is put your body on the line and try to get in the way of a shot. It's too late to make the interception or even get a tackle in as the attacking player has already lined themselves up to shoot.

Moving into the transition phase of play when a team has regained possession, centre backs will usually make the most passes in the team. These are often side to side or even back to their goalkeepers but they still need to be accurate.

Kim Ju-sung of Gimcheon Sangmu and FC Seoul had the best as a centre back at 93.89% and third overall. Kim only played 12 times, though, seven for Gimcheon and five for Seoul. However, his FC Seoul teammate Lee Sang-min played more games - 25 in fact - and showed 93.28% passing accuracy, seventh overall. Min Sang-ki of Suwon played 24 times and ranked eighth overall with 93.18%.

Accuracy of passes to final third

The passes, of course, need to be accurate. Kim Ju-sung had the best accuracy but having played just 12 matches this was too be expected. But just behind his 86.54% was teammate Lee Sang-min with 83.24% and Yun Young-sun at 81.79%.