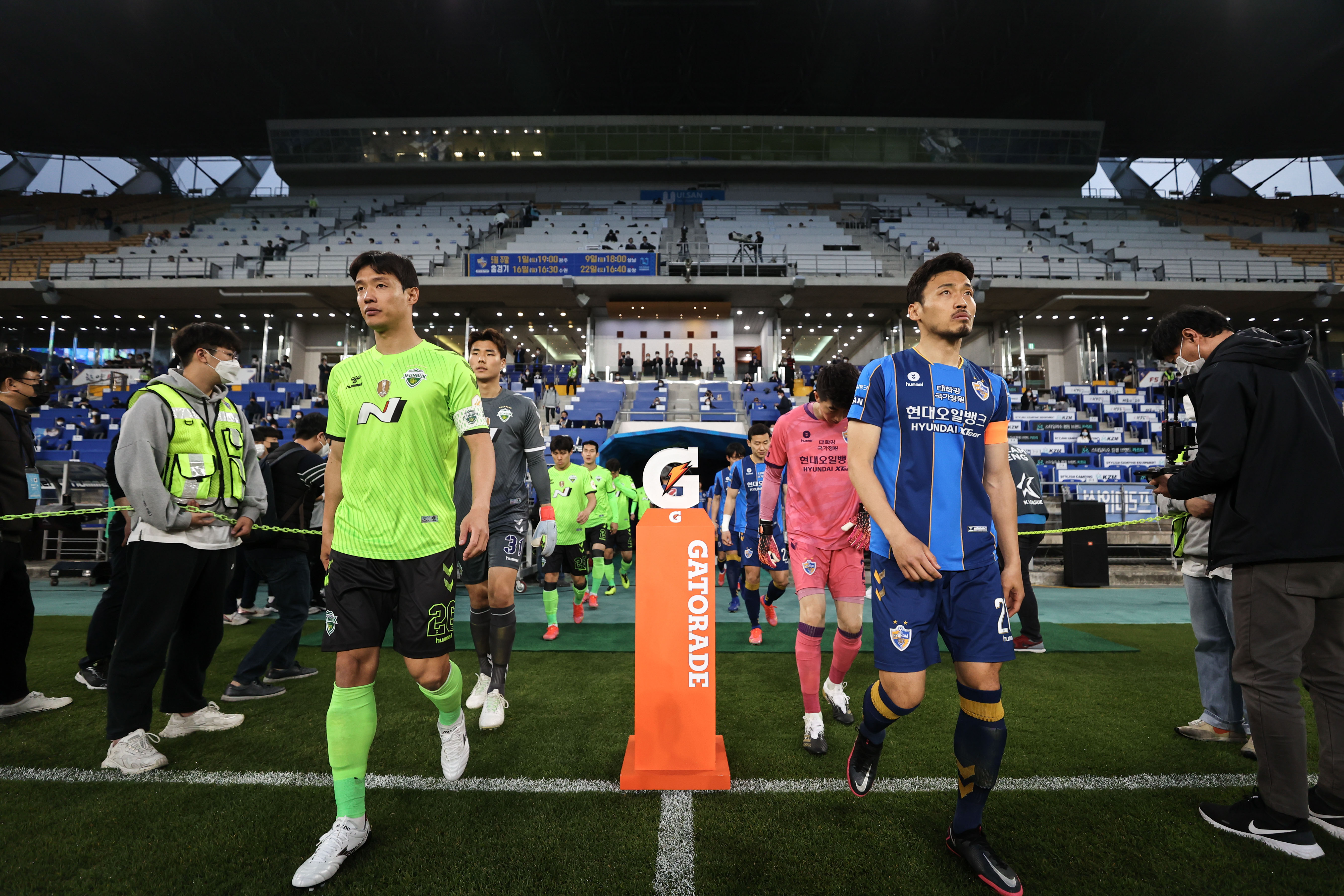 Friday football returns in emphatic fashion as K League 1's top two sides come face-to-face in Ulsan in a match that could have a significant say in this year's title race. Reigning champions Jeonbuk Hyundai Motors head east to face league leaders Ulsan Hyundai knowing that a defeat could see them fall to seven points from the summit and hand the Horangi a significant advantage. K League United's Head of Editorial Mattthew Binns previews this clash.

Ulsan have been able to enjoy an international break and recoup with just three of their players being required for their National Team. Heading into the break, the Horangi were on a run of seven games unbeaten, drawing two and winning five. Their last outing saw them come out 3-2 victors against an in-form Incheon United side, going three-nil up before two late Incheon efforts made for a nervy few final minutes.
Unlike Ulsan, Jeonbuk Hyundai Motors have been active throughout this international break as they looked to make up on fixtures still outstanding. A 1-0 defeat to Pohang Steelers in Jeonju saw them fail to take advantage and apply further pressure on the Horangi with Sunday then threatening to see them do the same as they found themselves having to fight back in Sangam against FC Seoul. Fortunately for Kim Sang-sik's side, their relentlessness paid off with centre-back Hong Jeong-ho scoring a 93rd-minute winner to see the Green Warriors come out on the right side of a 4-3 victory, leaving them four points behind their opponents going into this Friday.

Ulsan Hyundai manager Hong Myung-bo has close to a full squad to select from and will be hoping his international players Jo Hyeon-woo, Hong Chul and Lee Dong-gyeong all return from their time away with the Korean squad ready to feature from the off on Friday.
Jeonbuk Hyundai Motors have a number of injury concerns heading into this fixture. While he may have returned to action and found himself on the scoresheet on Sunday, Stanislav Iljutcenko is still recovering from what was initially set to be a lengthier layoff and could find his minutes reduced here as a precaution although he is still expected to feature. Having been absent from the squad at the weekend, there are also question marks surrounding the fitness of left-back Kim Jin-su but it is thought he too will be available for Friday's game. However, the Green Warriors will certainly be without Modou Barrow and Choi young-joon who are requiring longer to recover, with the latter's absence likely meaning that either Paik Seung-ho or Ryu Jae-moon, or potentially both, will start in central midfield.

Friday will be the 98th encounter between the two sides across all competitions with Ulsan having won 32 to Jeonbuk's 41. While recent seasons have tended to favour the Green Warriors, the Horangi have fared better than their North Jeolla counterparts this season having picked up four points from the two meetings. Ulsan won the last clash between the pair, coming out 4-2 victors in an enthralling affair in Jeonju back in May. However, their meeting at the Munsu Stadium proved a more cautious affair, with both sides failing to score in a tightly contested stalemate. 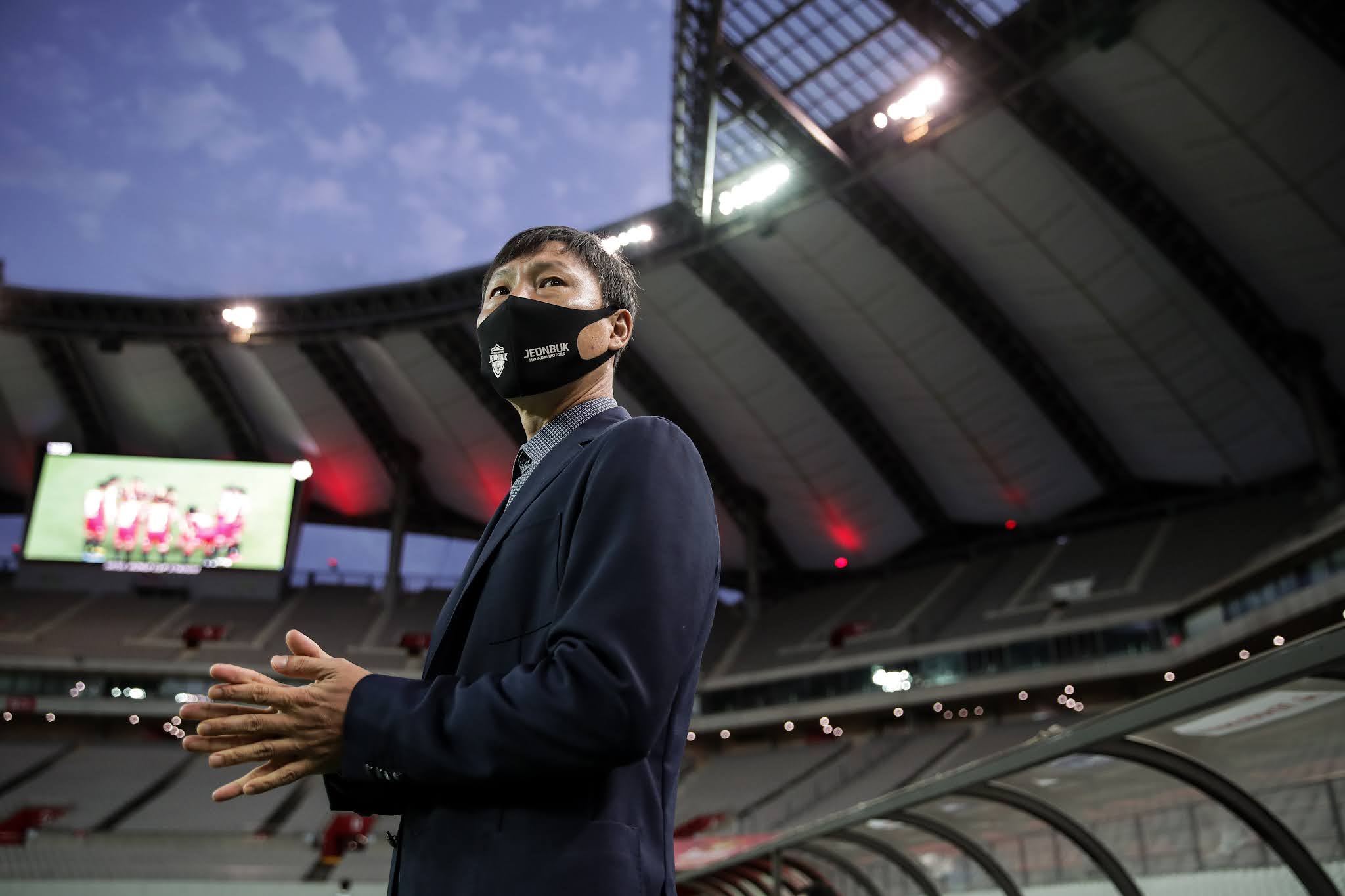 Having had the upper hand in this fixture and the coinciding title races with their opponents, Jeonbuk Hyundai Motors have been unable to get the better of the Horangi this season and could fall seven points behind them if they were to lose this Friday in what could be a damaging blow in retaining their status as K League champions. Both clubs appointed new managers at the start of the season and evidence from the first two encounters suggests they are still trying to figure each other out.
Their first encounter this season saw a goalless stalemate in which just 11 shots were recorded between both sides, and only one finding the target, as they sat back waiting for the other to make a mistake. A month later, however, both teams found themselves locked in an engaging affair that swung from end-to-end as they blew caution to the wind, finally finishing 4-2 in Ulsan's favour.
With Ulsan sitting four points clear in first, holding the upper hand, the impetus is on Jeonbuk to find the win. With defensive midfielder Choi Young-jun reportedly sidelined, the Green Warriors are left with two options; Ryu Jae-moon and Paik Seung-ho. Ryu was given the nod in the 4-2 defeat due to his distribution ability and, while the result was not favourable, could be the visitor's best chance of finding a way through Ulsan's resolve.
Ulsan may field an intimidating creative central midfield combination of Won Du-jae, Yoon Bit-garam and Lee Dong-gyeong if they so choose, but could opt for Lee Myung-jae to further reassure the defence. For Jeonbuk, while defensive solidity will be of high importance, their best defence may come in their own attack. If Kim Sang-sik can have his players move the ball with pace and purpose, they could well exploit an Ulsan defence that has been breached seven times in the eight games since the mid-season interval. 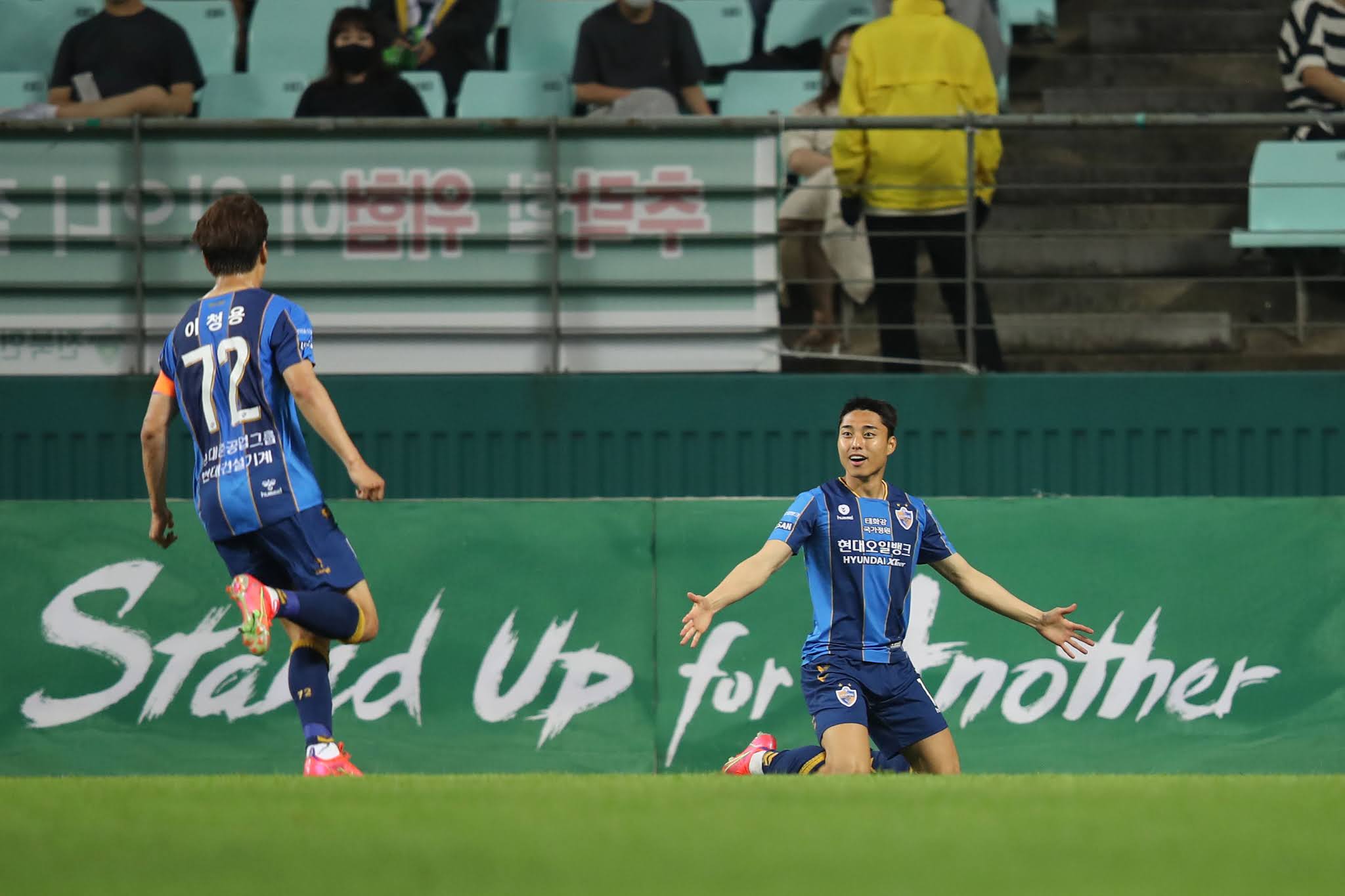 While the centre of the park may prove key to distribution, one player vital to the attack will be that of Ulsan winger Lee Dong-jun. Having signed from Busan IPark at the start of the season, the 2019 K League 2 Young Player of the Year has taken to his new surroundings in emphatic fashion, causing havoc on the flanks and posing questions of nearly every defence he faces.
Against Jeonbuk, Lee will likely be up against two of Korea's strongest full-backs; Lee Yong and Kim Jin-su. However, having bested them in recent seasons for Busan and Ulsan to both score and create goals, Lee Dong-jun could have a say in turning this tie in the Horangi's favour.  Lee has scored nine goals this season and assisted twice, making him the top scorer in the side and also fairing well in the league's scoring charts. Could his influence prove to be the difference on Friday evening? 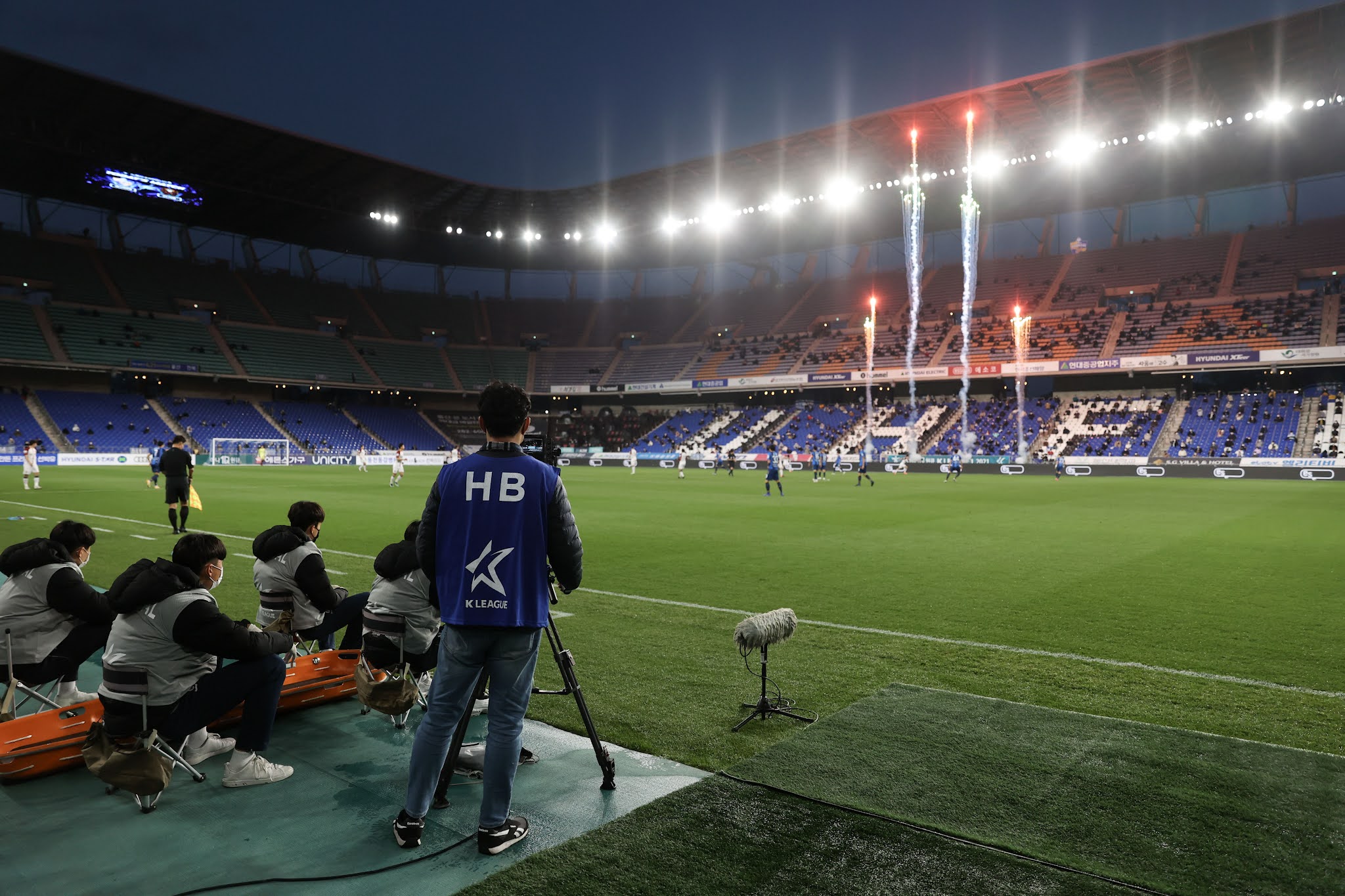