"We have to set the tone straight away": Alex Grant ACL Interview 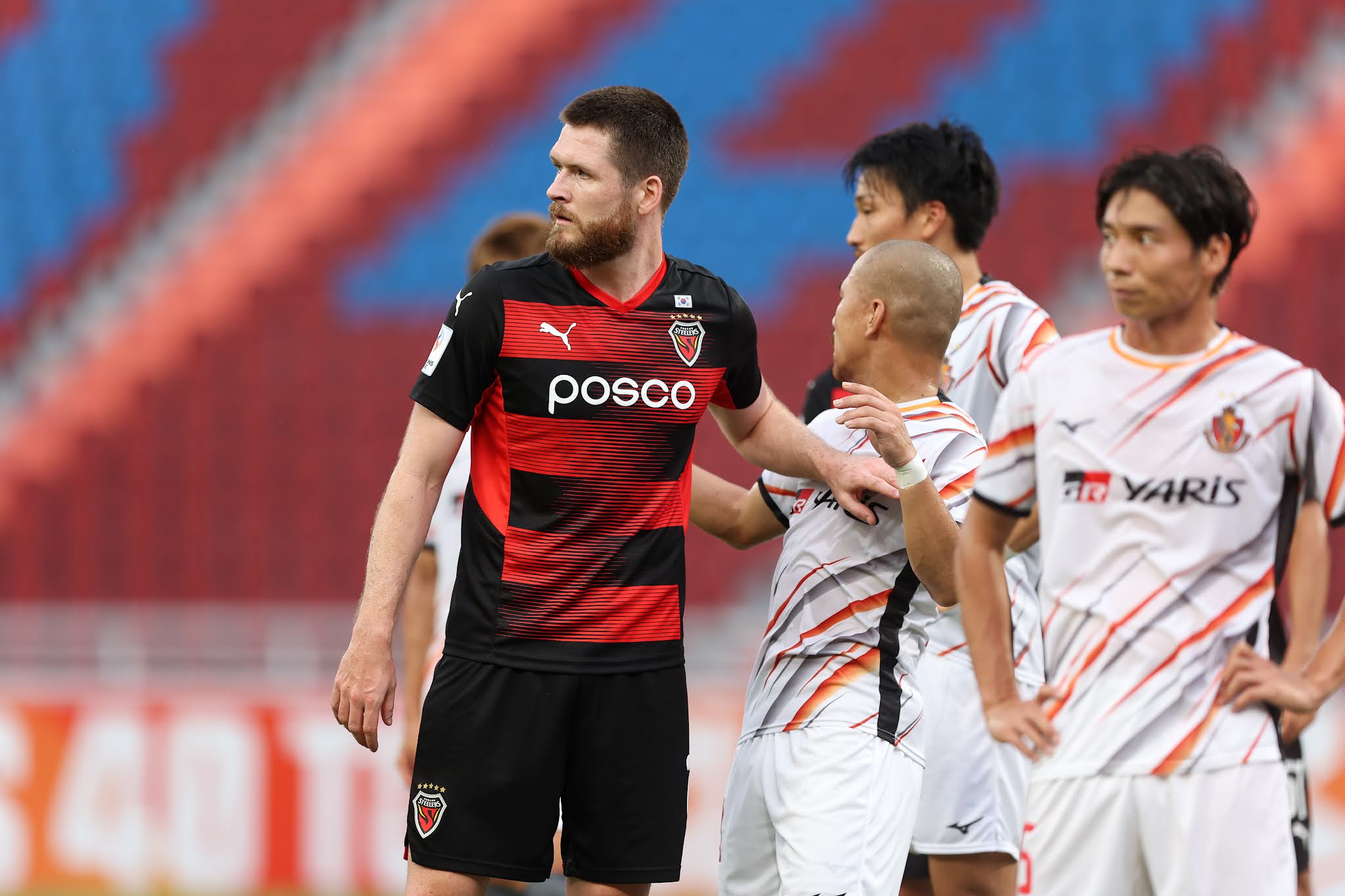 Pohang Steelers are competing in the AFC Champions League for the first time since 2016 and after finishing second in Group G, made it to the knockouts for the first time in 2014. Up next for the Pohang is a quarter-final clash with Nagoya Grampus, a side which the Steelers have faced already this season. Defender Alex Grant says the onus will be on Pohang to set the tone early on to ensure a place in the last four.

Thoughts on the season so far:

"I think probably not as good as what we would have liked and what we would have hoped if I'm honest, and I think that the start we had was promising and we definitely showed glimpses over the course of the season but just, unfortunately, we've just not been able to maintain the consistent levels of teams above and it's probably killed us in a sense in regards to our position in the league. I think we've let ourselves down in a few games and everyone in the squad can probably hold their hand up and say, you know, at some point here or there, they've made a mistake and that's football, footballers do everyone makes mistakes but we've not always been able to bounce back from those mistakes.

"You've seen over the last month we lost four on the bounce before the Gwangju game and it was great character from the lads to turn that game around. So I think that's been probably the most disappointing thing, the fact that we haven't been able to maintain that consistency but there's definitely been promising signs and good areas of the season which we can look back on and be proud of. 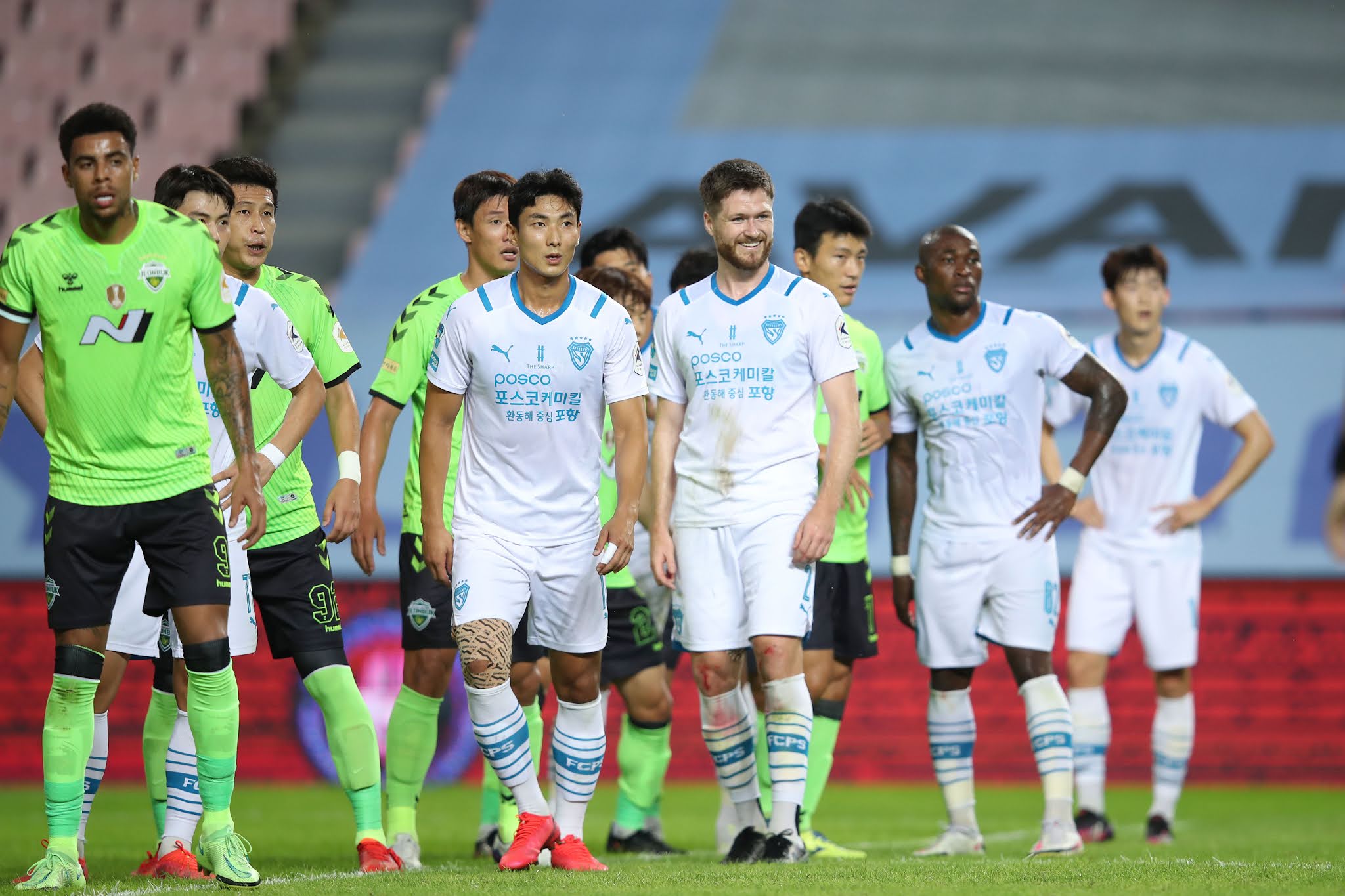 "Obviously there's games that come to mind, the one's that I played in, Jeonbuk away was a good win. And there's been a few more as well, especially at the start of the season. I think the boys grinded out some really good results and played really well. We've had injuries and I'm not using that as an excuse but the squad has probably chopped and changed a bit more than what we would have liked and that's probably been a contributing factor as well as to where we are in the league.

"But one thing I've noticed in Korea since I've been here is the fact that it also always feels as though any team can be anyone on the day and it all depends on who shows up. I think that the playing styles of the majority of the teams are all pretty similar. I think, just going into a game with the right mentality and the right attitude and the desire and hunger to win definitely is a real key factor I think in winning in the K League for sure. "

Returning from injury in the ACL:

"We weren't anticipating it to be a lengthy stay out on the sidelines but unfortunately that was the case and to get back to the Champions League was kind of my goal towards the end of my my rehab. When I come back to play in and I think I have my set and the Champions League and the club, the manager, everyone was good with me and wanted me to get back for the Champions League. We had a lot of games and a short schedule so the minutes I got were really good to be fair, and didn't just throw me in and play me 90 minutes every game, would have more than likely broke down again. So it was good that they managed it well in that respect. 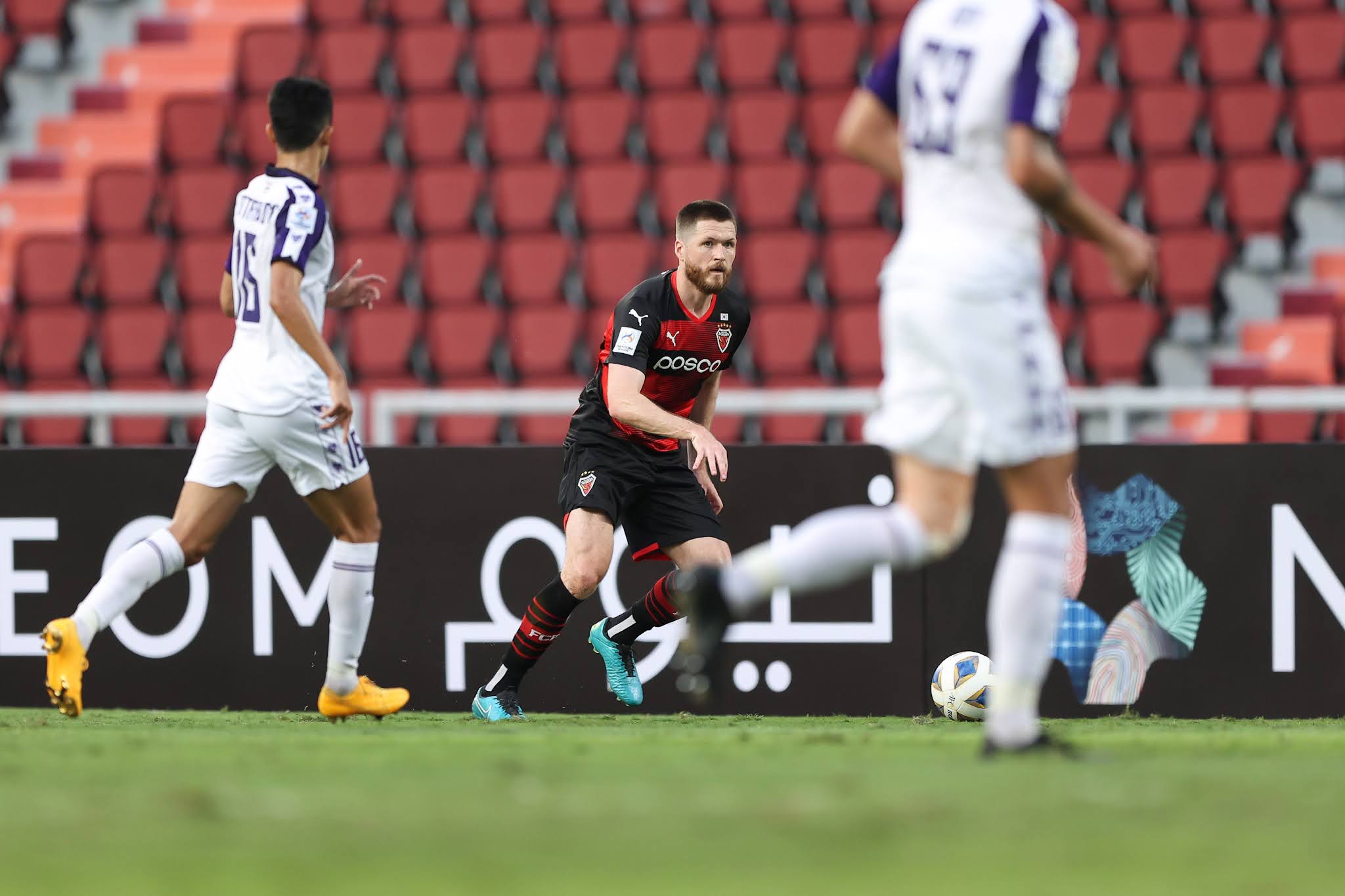 "Since I've been back, I feel like I've been playing well. The results haven't been the greatest over the last month or so but we have picked up some important wins. The team can play brilliant football and I think one thing that we have shown Pohang especially is the resilience and how we've been hard to beat over the course of the season. I think teams find it very hard to break us down and we've defended really well. Before the last few weeks, we probably had the best defence in the league so that's been definitely a positive. The one area that we need to look at is creating more chances and scoring more goals to push us up that table."

[READ: "It's our turn to win and get payback:" Kang Sang-woo]

On Pohang's targets in the ACL this season:

I think the way the Champions League games were scheduled, and I think the qualifying rules this season have been slightly different compared to last season's where, even if you finished second, it wasn't a guarantee. I don't think we were aware of that going into the tournament and it was one of those things we kind of find out last minute. That was one thing that was probably going against us because I felt we did have a tough group, obviously, Johor the Malaysian champions who you know we're a very good team and Nagoya they've obviously proven over the years how strong they are and they probably were the best team in the group and deservedly so and even Ratchaburi, they fought for a tough 0-0 draw against us late in the group as well. 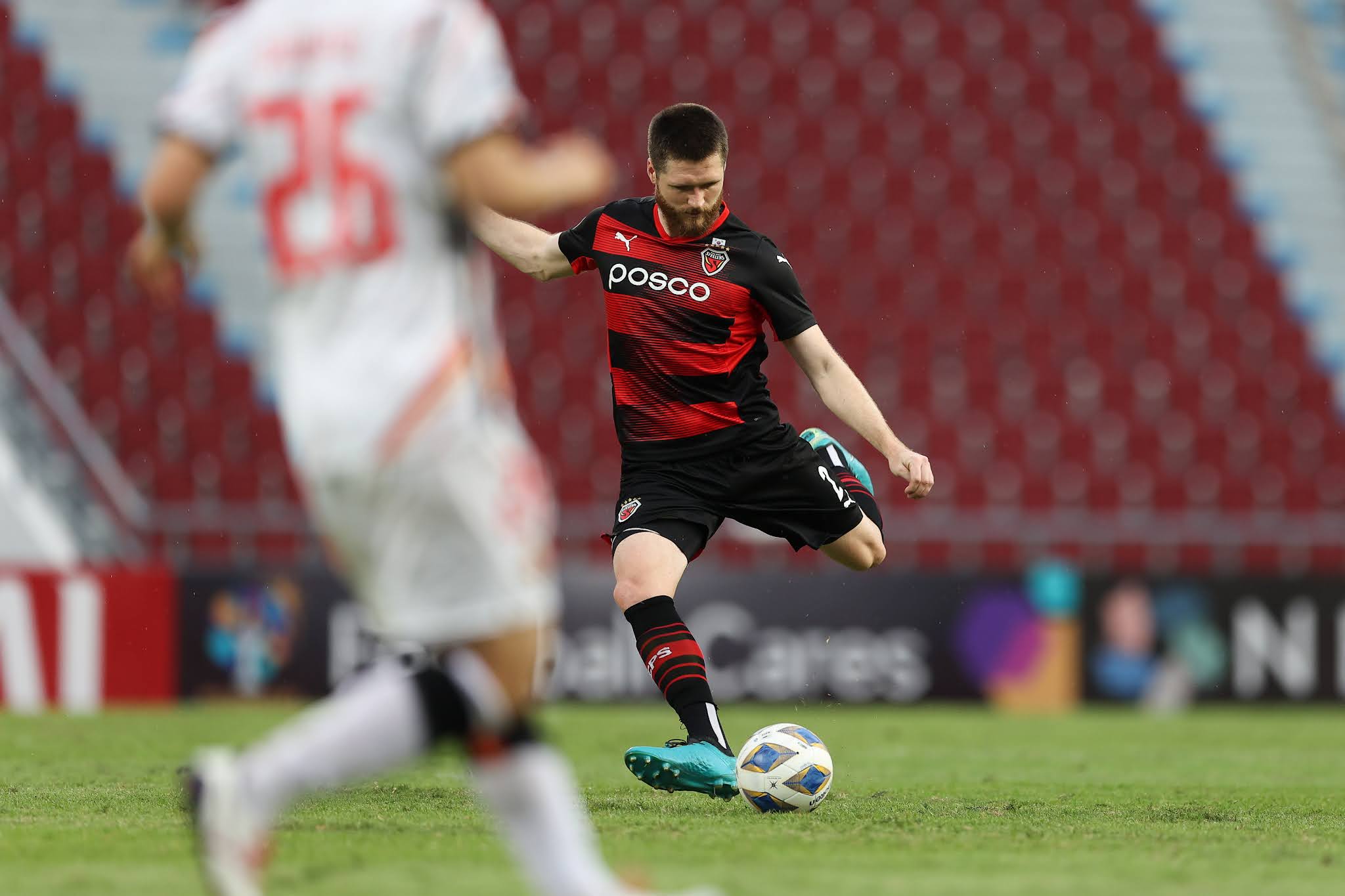 "We were always optimistic about getting through the group. I think, when you compare the other groups, we definitely had one of the toughest ones and especially with the Aussie teams dropping out and a couple of Chinese teams as well, it made it easier for some of the other teams in the other group. But we were solely focused on the job that we had and I think we did well over there. We played really well and that 1-1 draw against Nagoya in the last group game was a really important result and now we are in the quarters."

Thoughts on playing Nagoya Grampus again and over one leg:

I think we've definitely got the hardest fixture. Ulsan and Jeonbuk, they're familiar with each other as we are with them as well. But I guess we're lucky in that respect that we've played Nagoya already a couple of times, we kind of know their style of play, we know how strong they are. But, if we turn up on the day there's no reason why we can't get a result and get through. It's a one-off game which can work to our advantage in a stadium that we're sort of familiar with so I'm confident that we can get a win and I'm happy that we don't have to go to Japan if I'm honest because I don't think I could do another two weeks of quarantine or isolation. It's done as a favour, the AFC, in that regard. I think the boys are looking forward to it and then we've had a good 10 days or so before the game to prepare, that's going to be really important."

"It's almost like a final, so whoever turns up on the day and goes for it. It's like when we played Osaka the other week, you could tell within the first 10 minutes that we wanted it more, that we were going to get the result and so we have to set the tone straight away, I think."