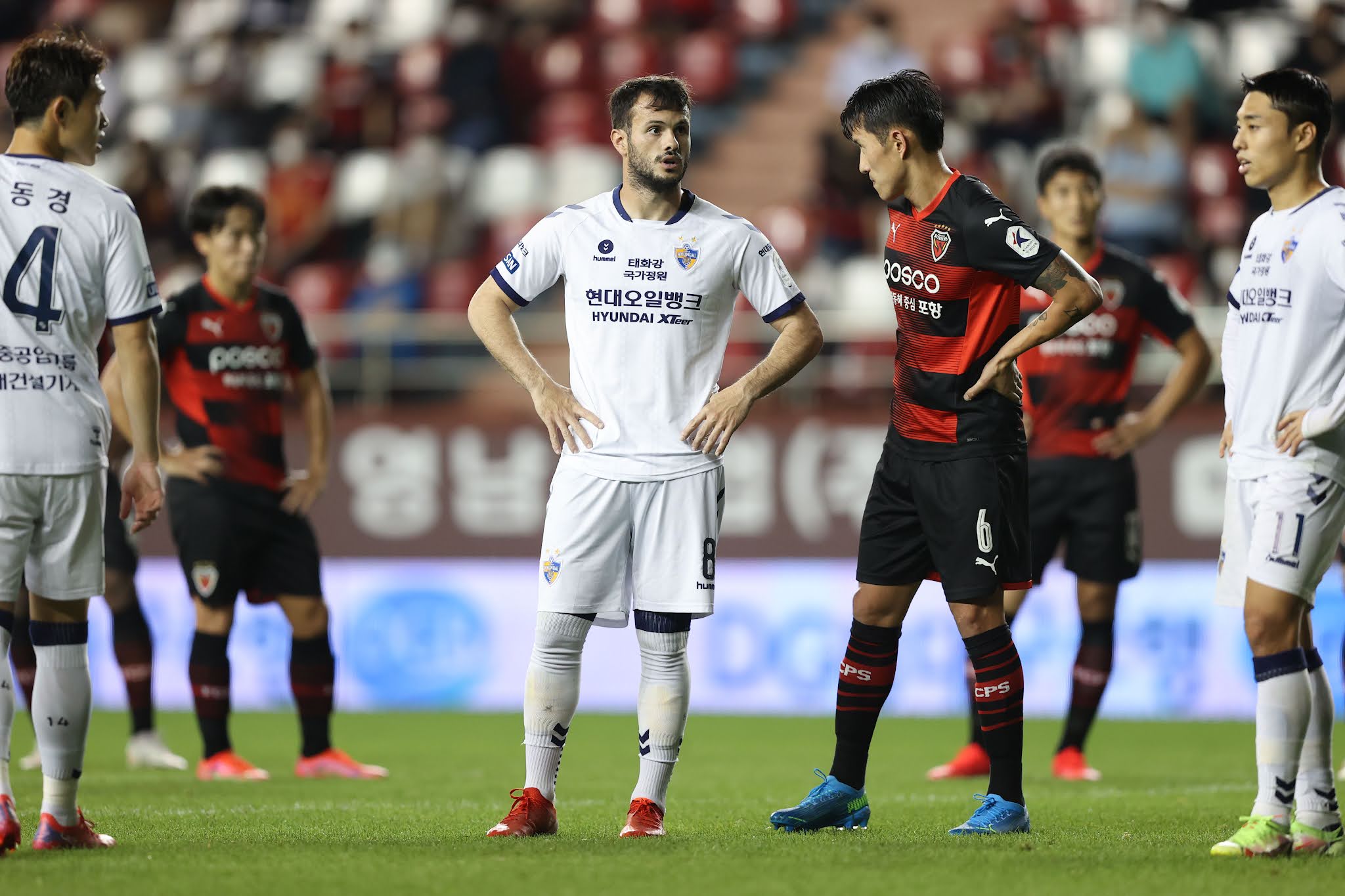 An East Coast Derby but with a difference, instead of just bragging rights on the line, there's a place in the AFC Champions League Final up for grabs when Pohang Steelers take on Ulsan Hyundai this Wednesday night.

K League was guaranteed to have one of its teams competing in this year's AFC Champions League Final after East Coast Derby rivals Pohang Steelers and Ulsan Hyundai both booked their places in the final four on Sunday at Jeonju World Cup Stadium.
A 3-0 win over Nagoya Grampus sealed Pohang Steelers' place in the semifinals before Ulsan Hyundai beat Jeonbuk Hyundai Motors 3-2 in extra time at 'Jeonju Castle' to book theirs.  Pohang and Ulsan don't have to wait long as the semifinal match will take place this Wednesday at Jeonju World Cup Stadium with a seven o'clock kick-off.
Much like the East side of the competition, the West sees two teams from the same country going toe to toe with Al-Nassr and Al Hilal from the Saudi Professional League both competing for a place in the final.

With the most recent victories, Pohang were able to end a run of three straight losses with two wins on the bounce. In league play prior to the international break, Pohang struck late to pick up a valuable 3-2 away win over Gwangju FC. Lee Ho-jae bagged two in seven minutes to turn a 2-1 defeat in a 3-2 victory with what were the 21-year-old's first goals as a professional.  Then, the 3-0 win over Nagoya on Sunday was the first time Pohang had scored three goals or more without reply this season, and the first time since the 4-0 East Coast Derby win October 2020. The Steelers have four wins from their last 10 outings and six from 15.
Ulsan Hyundai went into extra time on Sunday night in the Horangi's 3-2 win over Jeonbuk. Valeri Qazaishvili's close control and tidy finish gave Ulsan the lead on 13 minutes before Han Kyo-won levelled four minutes before the interval. The first period wasn't done there, though, as Yun Il-lok restored Ulsan's lead deep into stoppage time. Takahiro Kunimoto made it 2-2 two minutes into the second half with a goal that eventually meant the game would go to extra time. The winner came via an Lee Dong-gyeong screamer in the 101st minute. Prior to the ACL quarterfinals, Ulsan had won three straight matches in the league and are on a run of four straight wins in all competitions with just one defeat in 15.

Pohang Steelers versus Ulsan Hyundai is one of the oldest rivalries in K League with 152 previous meetings in all competitions. The overall head-to-head record reads Pohang 58 wins, Ulsan 52 and 42 draws. This season, Ulsan have gone unbeaten against the Steelers with a 2-1 win at the Steelyard in September and a 1-0 win at the Munsu in May following March's 1-1 draw. The two giants met in the FA Cup semifinals last year with Ulsan winning on penalties following a 1-1 draw. However, Wednesday's clash will be the first-ever AFC Champions League East Coast Derby.
In terms of each team's records against fellow K League opposition in the ACL, from five meetings, Ulsan have won three and lost two. Pohang, meanwhile, haven't faced K League opposition in the ACL since 2014 when the Steelers beat Jeonbuk in both legs of the Round of 16 before eliminating FC Seoul on penalties following two goalless draws in the quarters. In terms of outright ACL wins, Pohang Steelers have three (joint-most) while Ulsan have two, the second of course came last year. 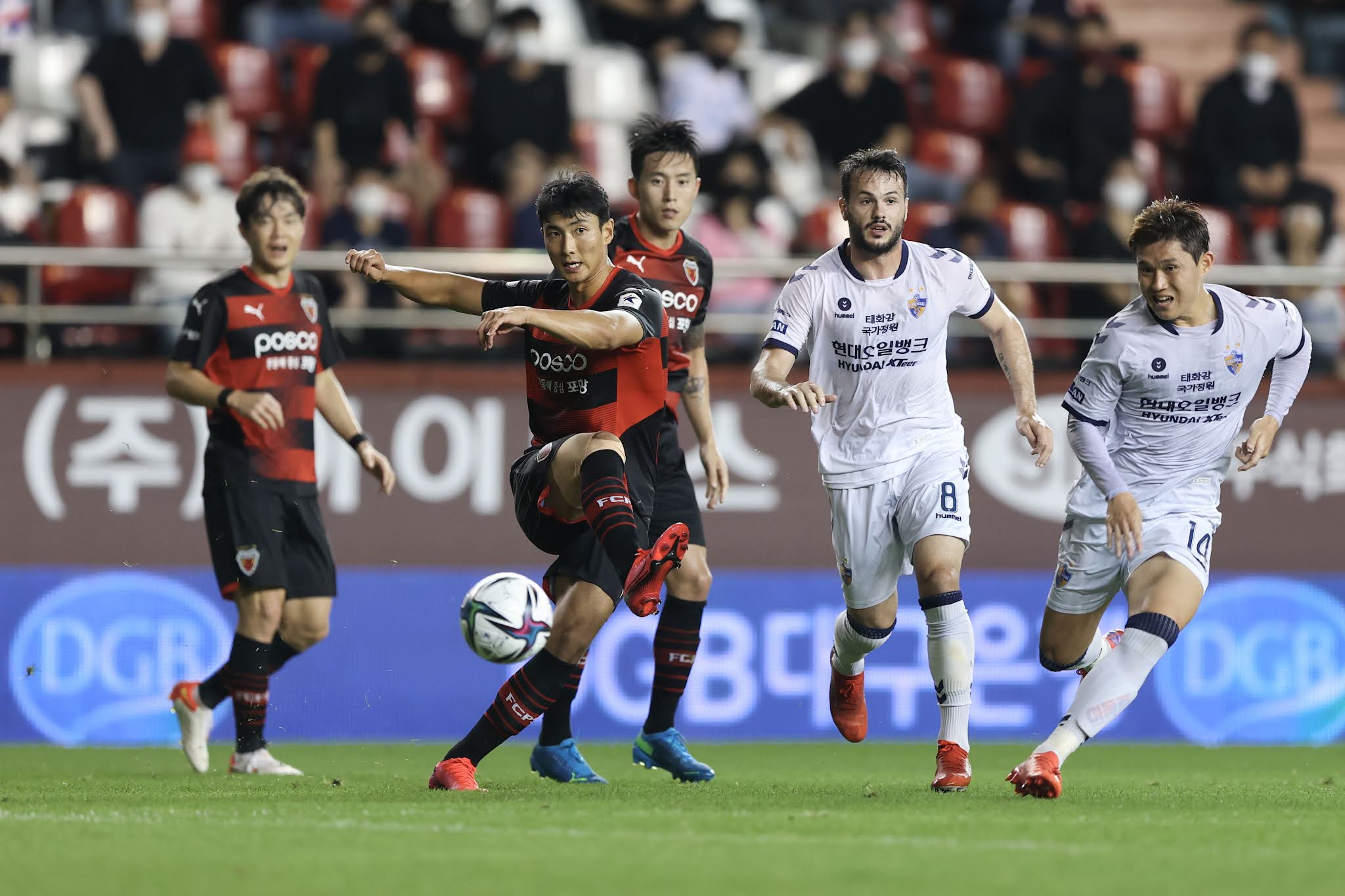 Both Pohang and Ulsan booked their places in the semifinals after moments of individual brilliance and special goals. For Pohang, Lee Seumg-mo's half-volley into the top corner to make 2-0 against Nagoya came at a time in the match where the Steelers were in total control and made their possession count. It was also a spectacular strike that showed that Pohang are finding a way to win, despite notable absentees, and were determined to make it third time lucky against Nagoya. An Lim Sang-hyub brace with goals either side of Lee Seung-mo's stunner sealed the win, the second in particular was a joy to behold for the traveling Steelers faithful. Lim has a good record in the ACL having scored two last year for Suwon Bluewings.
Ulsan, too, pulled out all the stops in their own quarterfinal clash. Valeri Qazaishvili's opener in the 13th minute set the tone, showing close control and composure to find the far corner. Ulsan's third of the night against Jeonbuk came in emphatic fashion via substitute Lee Dong-gyeong. The Korean international fired in a sensational winner in the 105th minute after picking the ball up from Yoon Bit-garam towards the touchline, sending in an arrow of a shot straight into the top corner from 20 yards out. Both teams are capable of producing moments of brilliance and, given that it is an East Coast Derby, it could be a very tight affair and may just take a moment of magic to won it. Wednesday's clash is likely to be one for the ages.

Ulsan Hyundai are playing in the semifinals of the AFC Champions League for the fourth time in their history, equalling Jeonbuk’s record for a South Korean team. Pohang Steelers are in the semifinals for the second time and first since 2009 when they went on to win the competition.

Wednesday’s clash is the 16th all-Korean affair in the AFC Champions League and the fifth in the semifinal stage. In all four previous all-K League semifinal matches, both teams have managed to score. Ulsan are undefeated in 18 consecutive matches in the ACL, winning 16 and drawing two to further extend a club record and is also the longest current unbeaten streak in the competition. Pohang have scored each of their last 27 goals in the AFC Champions League from inside the penalty area. Pohang have scored and conceded 14 goals in their 10 league meetings with Ulsan since 2019, no other team has won or scored more against Ulsan during that period.