Jeonnam Dragons face an unenviable task as they travel to Ulsan Hyundai in the KFA Korean FA Cup semi-final. A one-leg game at the home of the Asian Champions, second-tier Jeonnam must defeat current K League title contenders Ulsan to progress to a final against either Gangwon FC or 2018 Cup winners Daegu FC. One man who has been integral to the Dragons success of late is Samuel Nnamani with the 26-year-old one of the first names on the team sheet as Jeon Kyung-jun's side sit fourth in K League 2, readying themselves for a potential play-off campaign.

With a three-year spell in Sweden heralding a 36-goal haul, there will have been few surprised to see Samuel Nnamani's name spearheading AFC Eskilstuna's line-up in the 2019 Swedish cup final. Ultimately beaten in the showcase event, a semi-final victory over 13-time Swedish champions AIK saw Nnamani lead the line against the likes of former Premier League and Bundesliga stars Sebastien Larsson and Tarik Elyounoussi at AIK's Venue Friends Arena. Speaking to K League United about their memorable victory on penalties, Nnamani said: "We had a similar situation (to Jeonnam) when we got promoted and played the cup final as a smaller team. That year we played against the best team in the country in the semi-final. We played well and it went to the penalty shootout. They missed a lot, we scored a lot, so anything can happen."
Promotion that same season, a double he would love to replicate in Korea, saw Nnamani attract the attention of Jeonnam as he looks to fire another provincial club into the top flight. While there are parallels between Eskilstuna and the Nigerian striker's new home of Gwangyang, both similar size coastal cities with football teams flitting between the top two divisions, Eskilstuna is more famed for handball and rock music than the steel production hub of Jeollanamdo. Climate is another change of surroundings that Nnamani has had to swiftly adjust to as he scored the only goal of the game to defeat K League 1 side Pohang Steelers on a balmy 27c Wednesday evening on the south coast in the quarter finals.
The Other Side of the Coin
Nnamani and his Jeonnam teammates do not have to cast their mind back far to recall the spirit of the underdog in the Korean FA Cup. While Daejeon Korail went all the way to the final in 2019, the Dragons faced another third-tier side in Busan Transportation Corporation at the Gudeok in May this year. In an end-to-end encounter, Nnamani netted his first goal in Jeonnam colours to take the game to extra time and another penalty shootout victory.
[READ: September 2021 K League Newsletter]
Nnamani said: "I felt very happy to score in that match after playing a lot of games. It was really tough mentally, you know, but I was really motivated after that goal. In sport the most important thing is that we have to keep trying and here we are in the semi-finals waiting to play the best team in Asia."

Nnamani's timely goal as Jeonnam were themselves on the brink of becoming 'Cupset' victims, sparked belief that this year could herald an unlikely fourth FA Cup trophy. Further extending Jeonnam's incredible run of form on the road, Jeonnam returned home to host their second K League 1 opposition of the campaign in Pohang Steelers, having already dispatched of Suwon FC in the second round. The 26-year-old striker said: "I felt really good during that period of time. I think since August, I felt good playing wise, energy wise and have these feelings of scoring goals."

The Prospect of Ulsan 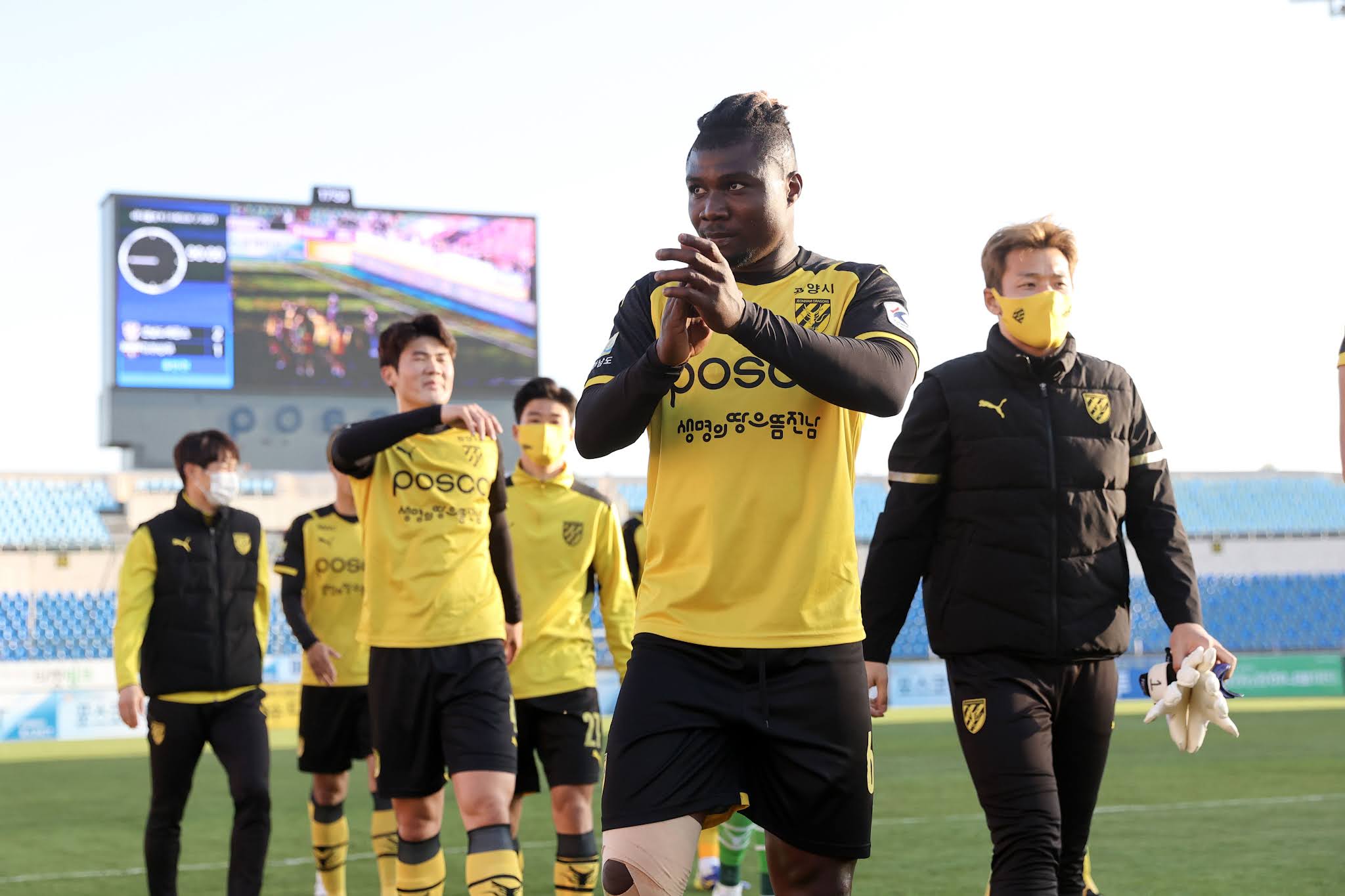 Nnamani is well-versed in the nuances of playing against different types of opposition and contrasting styles in the top two tiers. During this cup run he will have played against semi-professional players through to the best on the continent. He said: "The second division is always very intense, you don't get this freedom... sometimes you get two players on you and there's always someone behind you hitting you hard or something. It's totally different. Playing against K League 1 teams there is a lot of space. It's more free. When I get this freedom then I feel dangerous."

While a visit to the Munsu Stadium may be daunting for Jeon Kyeong-jun's side, three-time champions (2007, 2006, 1997) Jeonnam will take plenty of heart from their incredible form on the road. Defeat at Daejeon Hana Citizen in September was the Dragons first since July 2020 at the hands of eventual FA Cup winners and holders Jeonbuk Hyundai Motors. While K League leaders Ulsan pose formidable opposition this season, history may be the on Jeonnam's side winning the last FA Cup meeting between the two on penalties back in 2007, while Lee Sang-heon potentially earned himself a move to Ulsan by bagging the winner for the Dragons in the last league meeting between the two in 2018.

Ahead of the trip to Ulsan, Nnamani said: “Honestly I can't wait for this game to come. Of course, we have very important games coming up in the league, but I'm still looking forward to it because playing against the Asian champions is amazing and a great experience. We want to win to show the whole country that we can do it, you know, that we have the ability to do it."