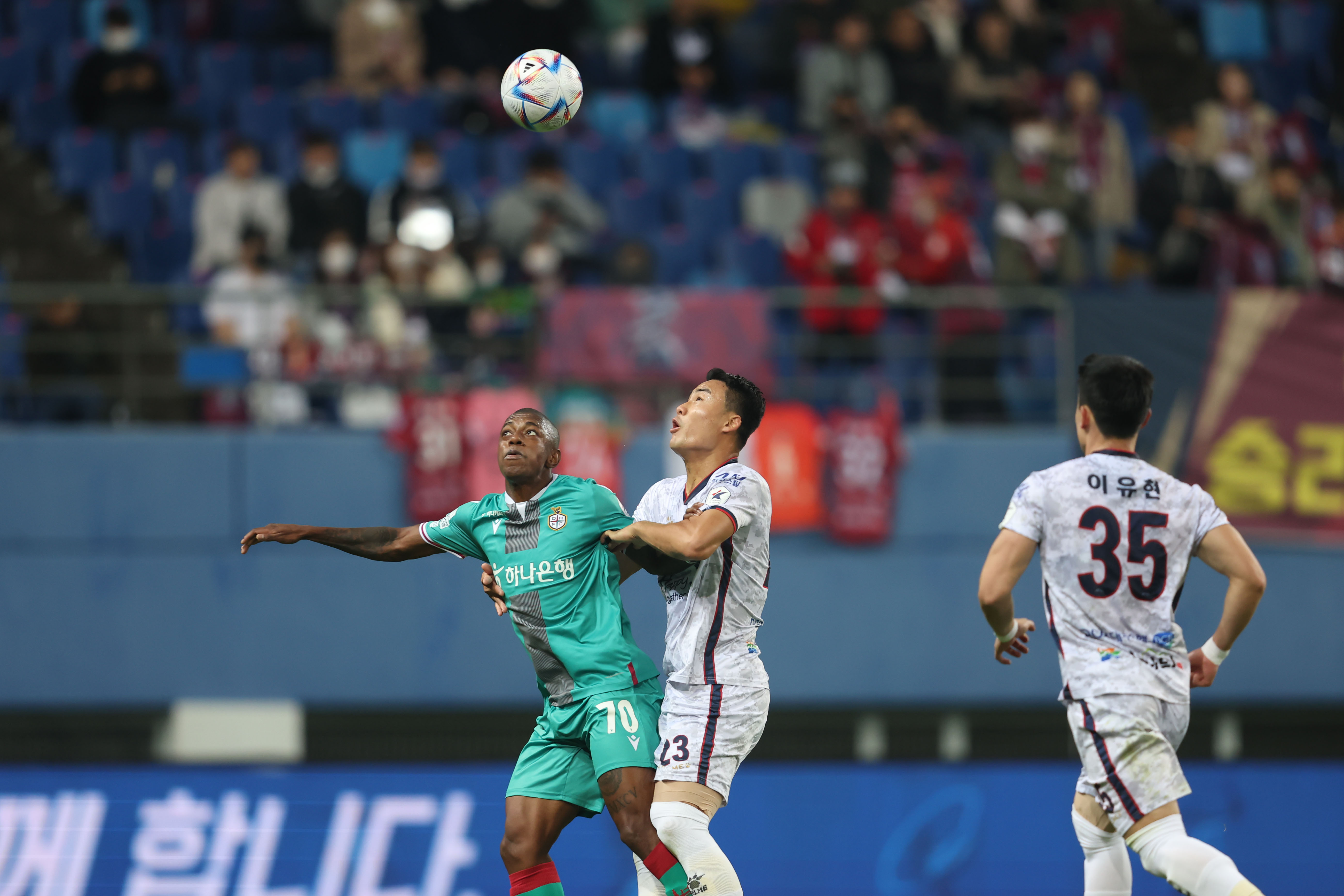 With a 2-1 aggregate lead, Daejeon Hana Citizen head to North Gyeongsang this Saturday for the Promotion-Relegation Playoff second leg against Gimcheon Sangmu. The Purples will be keen to right the wrongs of last year, having also led the tie after the first leg.

Daejeon Hana Citizen came back from a goal down to earn a 2-1 victory over Gimcheon Sangmu in Wednesday's first leg. Gimcheon skipper Mun Ji-hwan found himself unmarked in the box to nod home a Lee Young-jae corner in the 22nd minute to put the army team in front but Cho Yu-min restored parity from point-blank range on 36. The match-winner came in the 74th minute, Masatoshi Ishida poked a loose ball into the path of Ju Se-jong who rifled the ball in from close range.
Highlights

Daejeon Hana Citizen ended the 2022 K League 2 season in fine form and with a run of nine unbeaten with six wins including three on the bounce.
Gimcheon Sangmu, meanwhile, ended the regular season on a run of five matches without a win. The army team's last win came on 18th September at home to Incheon United.

This is Daejeon's fourth K League promotion playoff campaign, the third of the Hana era and the third in as many seasons. Daejeon's first attempt in 2018 ended in a 3-0 loss to Busan IPark in the promotion final stage. In 2020, a 1-1 draw away to Gyeongnam FC wasn't enough for Purples to advance and last year's heartbreak of losing 4-2 on aggregate to Gangwon FC, despite at one point in the tie being 2-0 up, will still hurt. Daejeon's overall playoff record reads played seven, won three, drew two and lost two.
For Gimcheon Sangmu this is a first foray into the playoffs but the army team actually competed in the first-ever K League promotion-relegation playoffs. Sangju Samgmu won promotion to the top division in 2013 following a 4-2 aggregate win over Gangwon FC. Sangju also took part in the 2017 playoffs and beat Busan IPark on penalties following a 1-1 draw on aggregate.
Away goals do not count extra in this tie. If the score is level after 90 minutes the match will head to extra time and then penalties if necessary.

In the post-match press conference on Wednesday, Daejeon manager Lee Min-sung was asked about Brazilian duo Willyan Barbosa and Renato Kayzer who both missed the first leg. Lee said that he and his staff would have to assess their overall condition before Saturday's second leg but he has faith in the other players he has at his disposal to get the job done.
Gimcheon midfielder Ko Seung-beom appeared to pick up a knock and could be a doubt for the second leg. Kwon Chang-hoon, meanwhile, will be hoping his busy performance off the bench was enough to earn a starting berth.
[READ: Suwon Samsung Bluewings vs FC Anyang Preview]

Daejeon's win on Wednesday was their first ever over Gimcheon. The two teams met four times in 2021 in K League 2 with Gimcheon winning three including 4-1 and 2-1 wins at Purple Arena and drawing one.
Daejeon's record against the army team overall, including the Sangju Sangmu and Gwangju Sangmu eras, reads played 34 won 13, lost nine and drawn 12.
[READ: Interview with Gimcheon Sangmu's Lee Young-jae]

Holding a first-leg lead, Daejeon Hana Citizen have been in this position before. The Purples, though, shipped four goals away to Gangwon in the second leg to eventually lose the tie. A lot has been said about wanting to avoid a repeat of last year and so how Daejeon will approach the trip to Gimcheon will be interesting.
One reference point could be the way Lee Min-sung set his team up against FC Anyang away in September. Daejeon needed to win that match in their quest to finish second in the table. On that occasion, the Purples were set up in a 3-4-3 with wingbacks as part of the midfield four, an industrious striker leading the line and with pace either side.
There is, of course, a chance that the formation and tactics would be similar to Wednesday night as Coach Lee made no personnel changes from the team which beat Ansan Greeners on the final day. Away from home, Daejeon's commonly used formation was a 3-5-2 (22%), followed by a 4-4-2 (13%), and a 3-4-3 (9%).

Gimcheon, meanwhile, have to respond to Wednesday's loss if they are to preserve their top-flight status. At home, Kim Tae-wan has set his side up in a 4-3-3 for 36% of the time, a 4-1-4-1 18%, and 3-4-3 for 15%. Kwon Chang-hoon was bright during his 68 minutes on the pitch. He had three shots, two on target, was successful in four out of six of the dribbles he attempted, provided two key passes, and completed 19 of his 26 passes. The on-loan Suwon Bluewings man will be looked to for inspiration on Saturday.