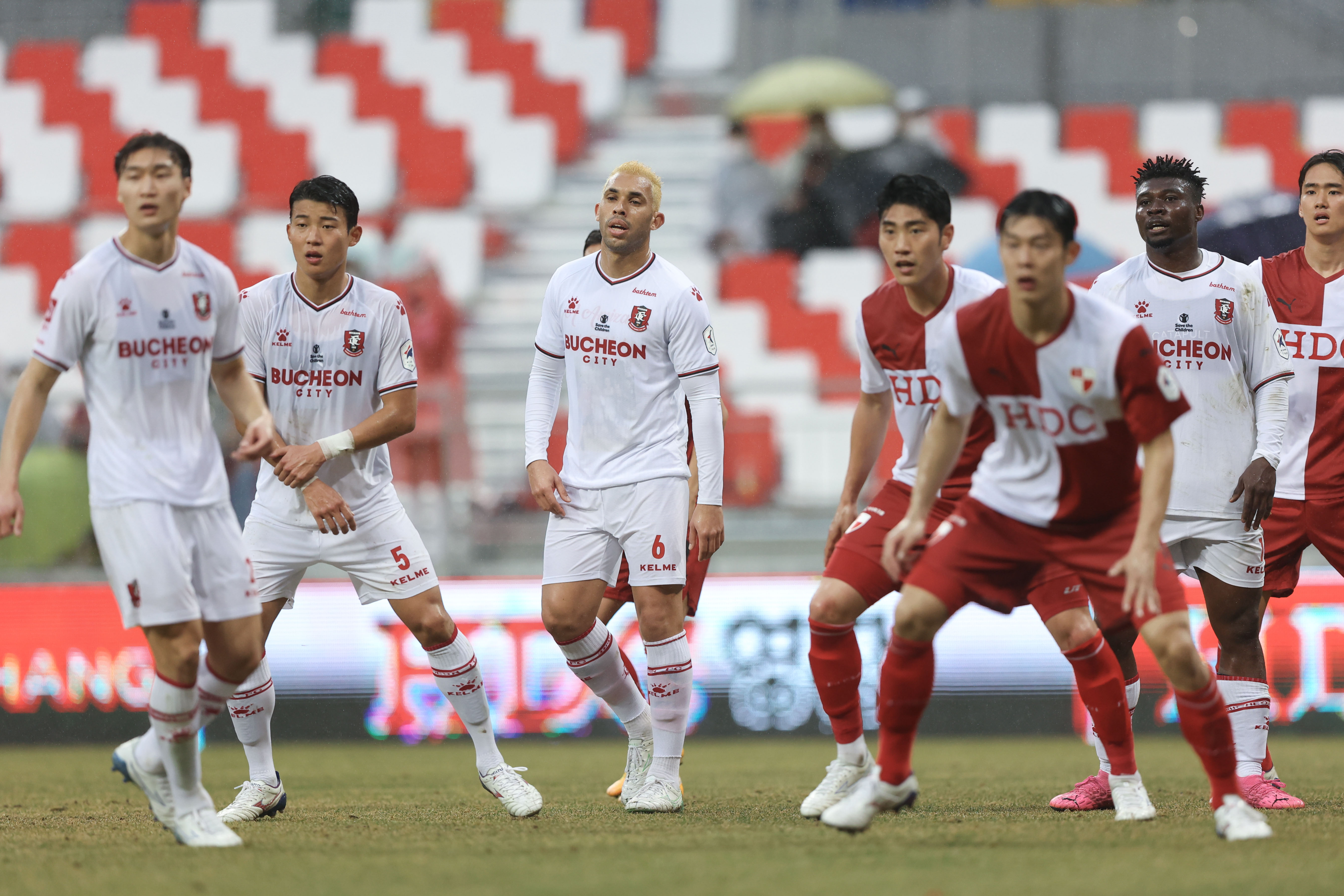 Midweek K League 2 action returns with four games across two days. Bucheon FC 1995 host Busan IPark on Wednesday looking to return to the top of the table, Gwangju FC will be looking to exact revenge on Gimpo FC for the opening day defeat, while FC Anyang take on Chungnam Asan with Maxwell Acosty looking to build on last week's late equaliser. 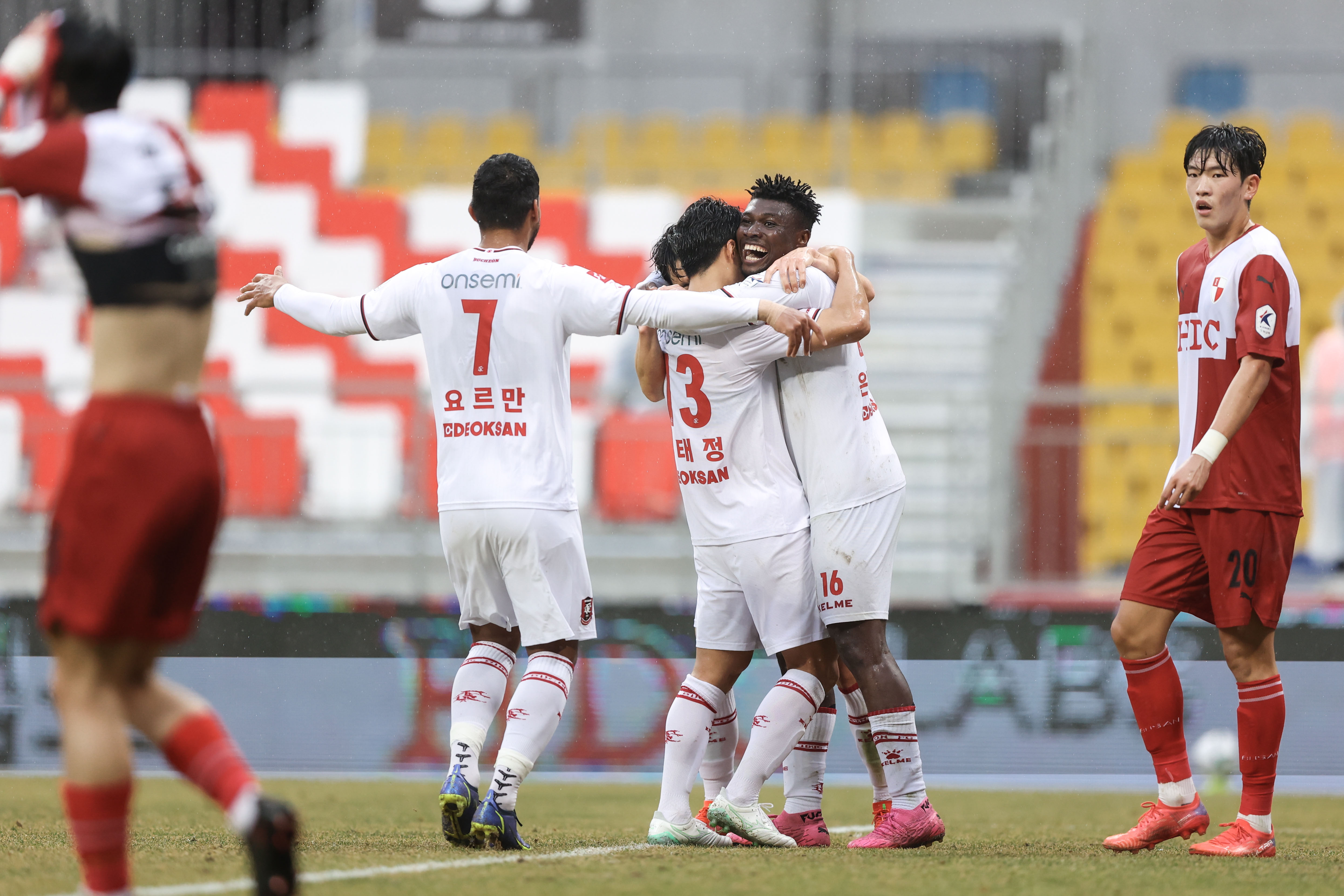 After suffering defeat to Gwangju FC in their last K League outing, Bucheon FC 1995 bounced back in the FA Cup last Wednesday to displace K League 1 side Suwon FC with a 1-0 win. The victory will give Lee Young-min's men confidence heading into this Wednesday's match with Busan IPark who were knocked out of the cup after a 2-0 loss to K3 side Ulsan Citizen. The Royals are now five matches without a win in all competitions and sit 10th in the league, level on points with Ansan Greeners who sit bottom. A win for either team would be crucial, even at this early stage of the season. For Bucheon, anything less than three points could open the door for the rest of the chasing pack. For Busan, a win could help narrow the gap between themselves and the playoff contenders.
Busan will be looking to improve their shooting accuracy, with a rate of 30.3% enough to place them second-bottom in that regard. The Royals have had the tendency to shoot from outside the area and have made the second-highest number of shots from outside the 18-yard box in the division. Bucheon are proving themselves to be something of a passing team with the second-highest tally in K League 2. The first meeting of 2022 ended in a 1-0 win for Bucheon thanks to a late, Han Ji-ho goal. Han, of course, spent 10 seasons with Busan before departing in 2020. Wednesday will be the 23rd meeting in total, from the previous 22 Bucheon have seven wins to Busan's eight and seven draws. 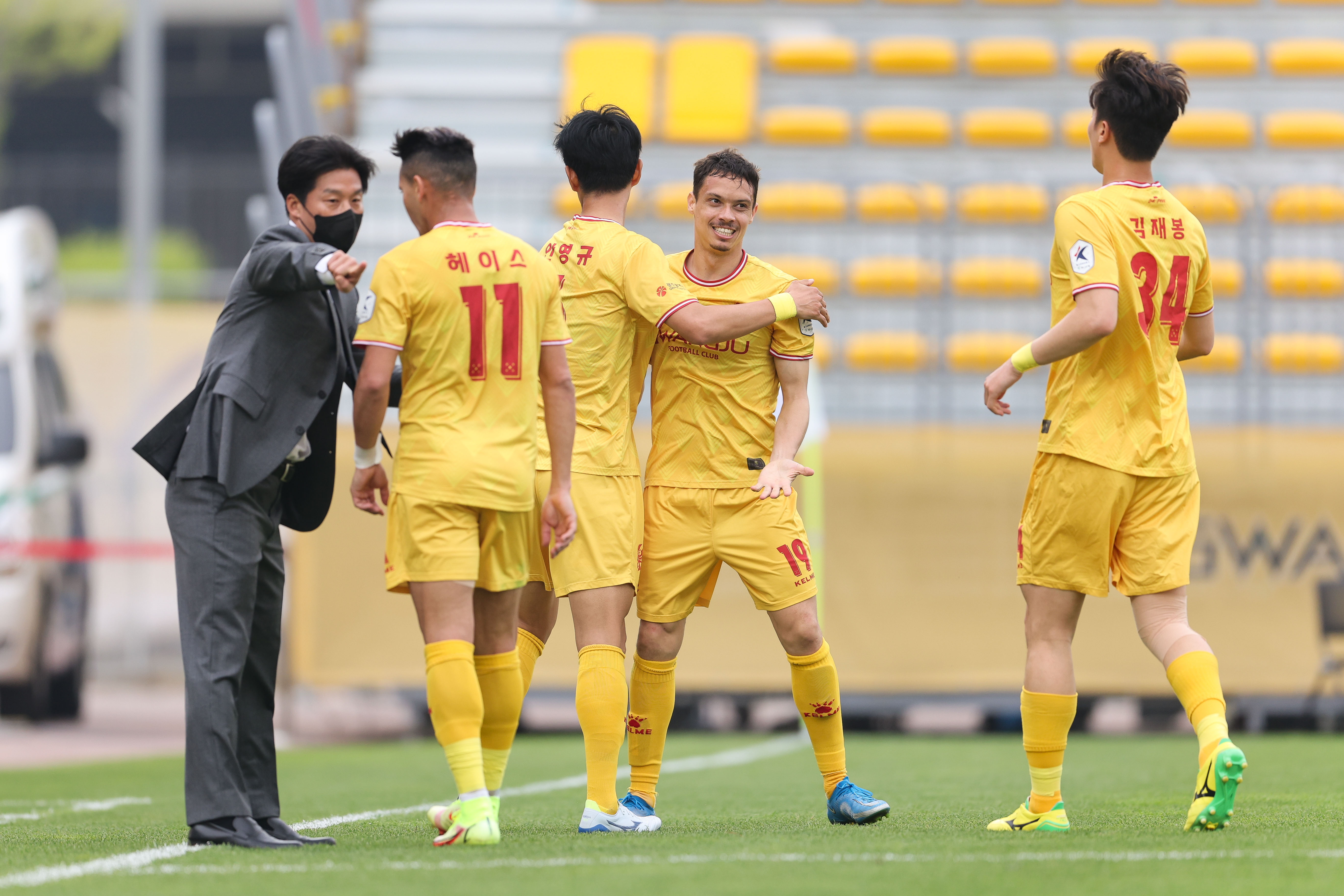 It has been a good couple of weeks for Gwangju FC. Not only do the Yellows sit top of K League 2 following a run of five unbeaten, but they also booked their place in the FA Cup 4th round last Wednesday after an incredible 6-1 win over K League 1 side Incheon United. Gwangju's league record reads eight wins, one draw and two losses from 11 matches played. In all competitions, Gwangju are seven unbeaten with six wins. But Gwangju's 2022 campaign began with a defeat and to their opponents this Wednesday, Gimpo FC. Goals from Son Seok-yong and Kim Jong-seok for Gimpo earned a 2-1 win in Gwangju. This will be the first-ever meeting in Gimpo where the hosts will be looking to make it just a second home win in K League.
Gwangju are showing themselves to be a possession-based team under new manager Lee Jung-hyo with 56.5% on average so far this season, the most in K League 2. They also sit in the top three for shots made, shots on target, and headed shots. Top scorer Reiss has five for the season so far, his most recent earned Gwangju a draw away to FC Anyang. 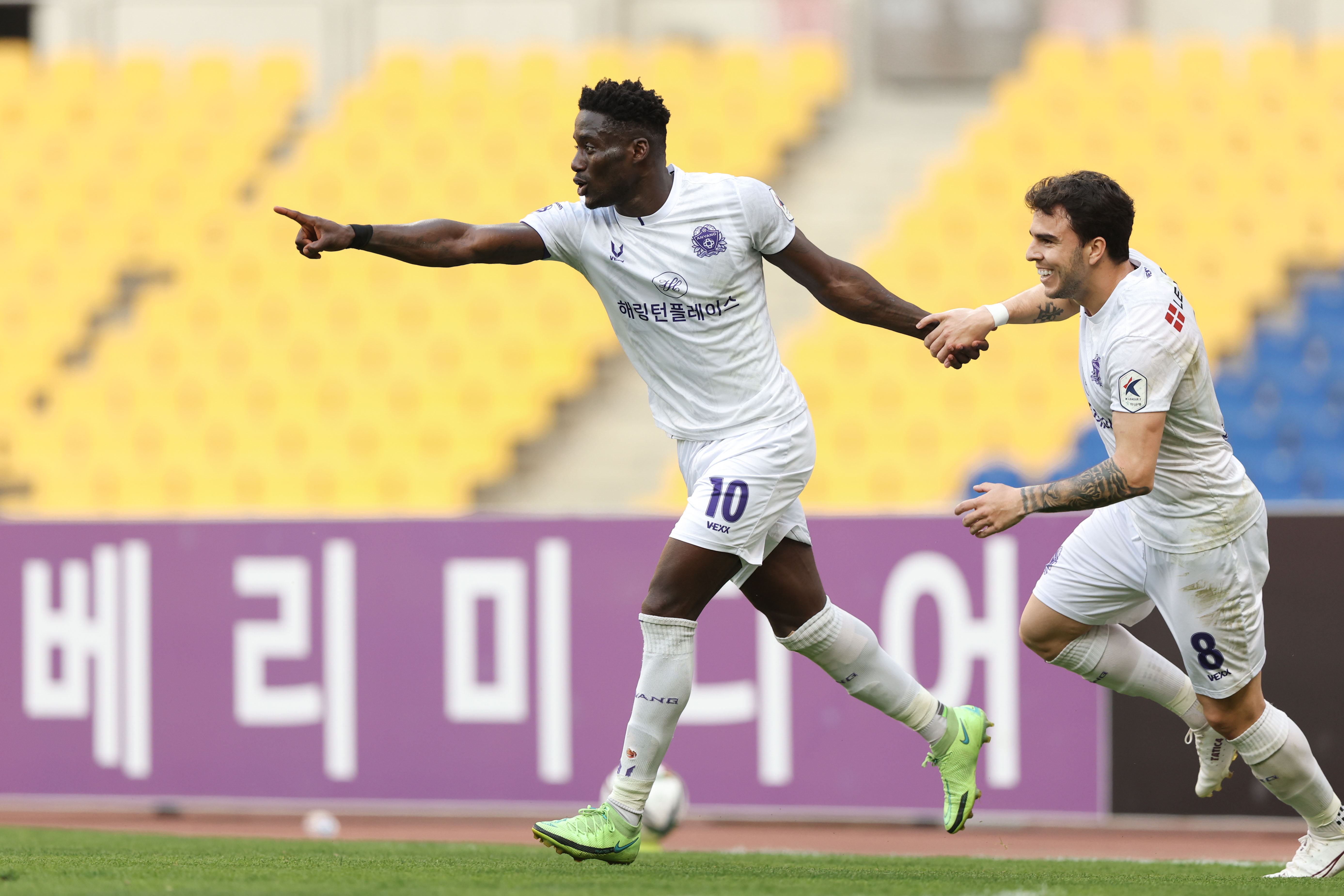 With a point-earning equaliser against Busan IPark in FC Anyang's last league outing, Maxwell Acosty ended a seven-week barren spell in front of goal. The Violets' number 10 headed home a Kim Kyung-jung cross at the back post to see the spoils shared at the Busan Asiad Stadium. Acosty actually sits third in K League 2 in terms of the number of shots dispatched with 25. Per 90 minutes, Acosty is eighth at 2.93, and with 48% accuracy is knocking on the door of the top 10. His last goal came via a header and was one of six headed shots he has had the season, the seventh-most in the division. And with 11 attempts on goal from outside the area, Acosty is fourth in K League 2. This Tuesday, Acosty and FC Anyang take on Chungnam Asan looking for a first win in five in all competitions.

Elsewhere in K League 2 Round 13

With Seoul E-Land vs Jeonnam Dragons postponed until Wednesday 8th June, the only other match taking place in K League 2 Round 13 is Ansan Greeners versus Gyeongnam FC. Ansan sit bottom of the table and are still looking for a first win of the season. Gyeongnam, meanwhile, are the league's top scorers but have also conceded the most. The first meeting of 2022 ended 2-2, Ha Nam's brace had Gyeongnam two goals to the good but a Greeners fightback and goals from Thiago Henrique and Lee Samg-min earned Cho Min-gook's side a point. A win for Ansan could take them off the foot of the table while three points for Gyeongnam would take them up to sixth place. 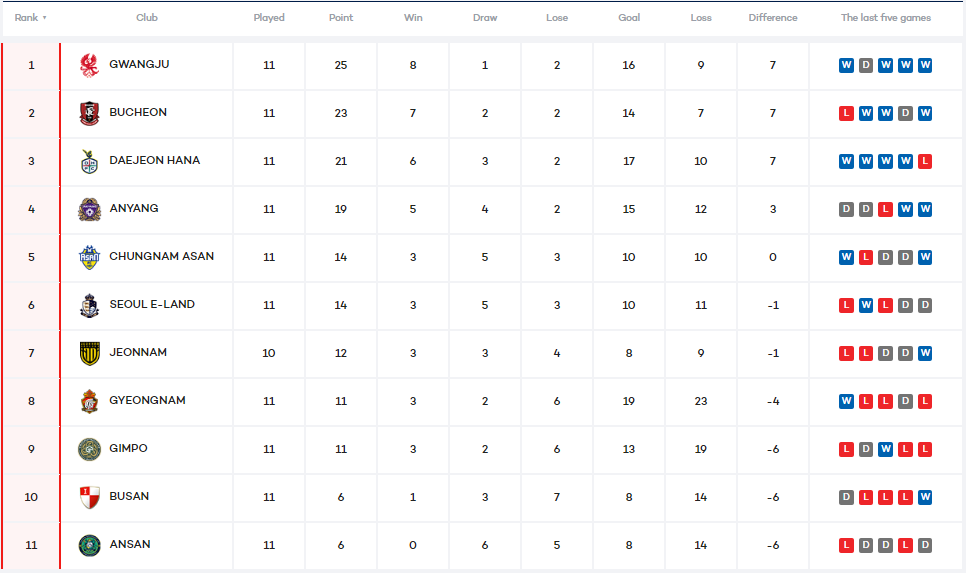