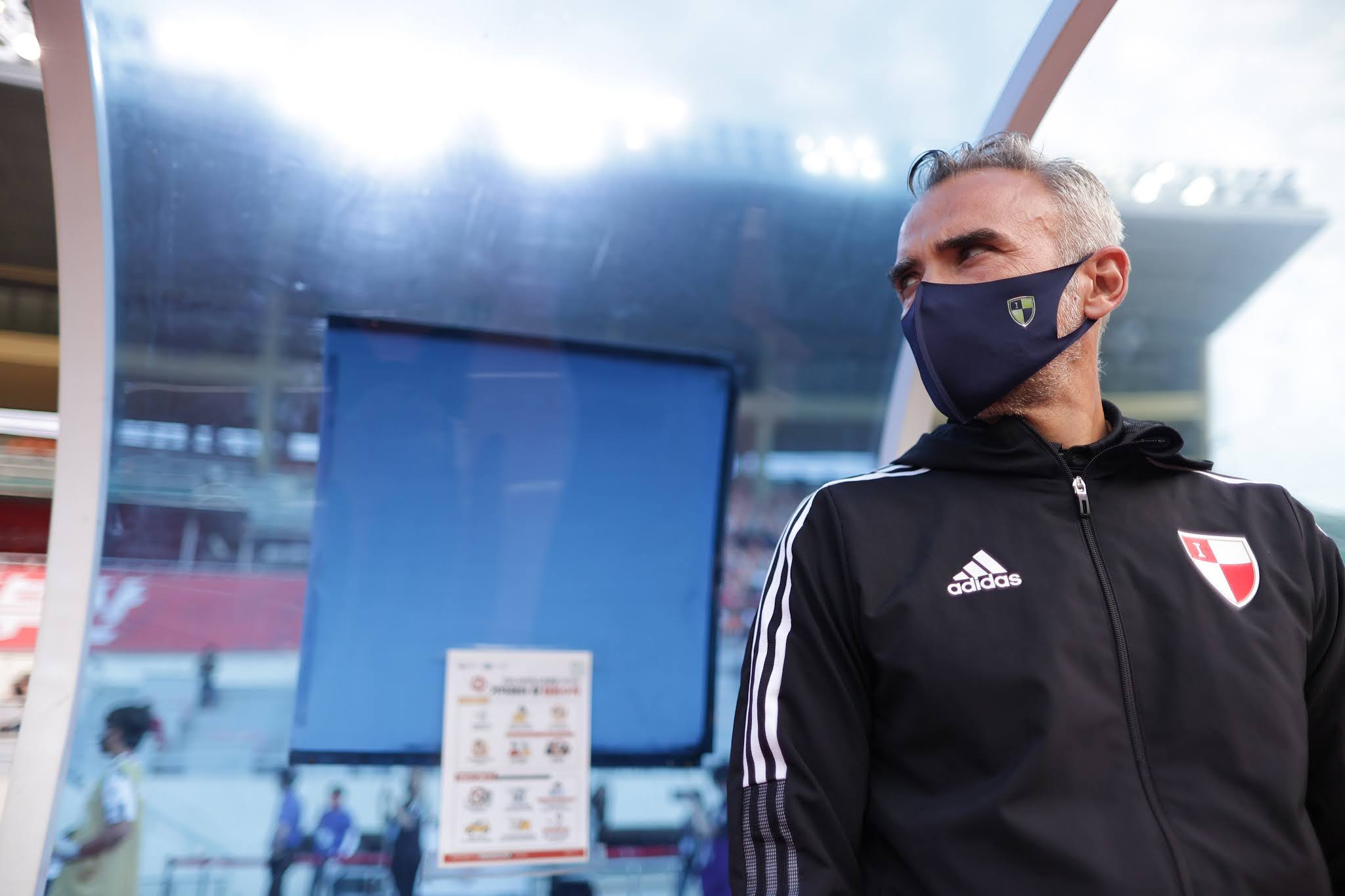 In November 2020, Busan IPark chairman Chung Mong-kyu responded to the disappointment of relegation with the appointment of Ricardo Peres, Busan's first foreign head coach since 2007, and the only foreign manager currently plying his trade in the K League. The Portuguese coach has had a promising start to his time at the club, leading his side into contention for a playoff spot in an extremely competitive K League 2.

The Portuguese manager sat down with K League United columnists Lee Dowon and Todd Wilde to talk about his first few months at the club, and begun the interview by expressing his happiness at settling into life in Korea's second city.

"For my family living in Busan, it's like we are feeling at home, we have fallen in love with the city, since there are many places here that are similar to Portugal. My children are very happy. They are at an excellent school, their friends often come to our place, and [from them] we learn more about the Korean culture. Peres also was appreciative of the Korean football community's support. "I appreciate how my colleagues, and the other Korean coaches, have welcomed me to Korea. I feel very happy here".

Peres was approached directly for the role by IPark and KFA President Chung Mong-kyu, who was looking a coach that could replicate the philosophy, professionalism and training methods being utilised within the National Team set up (led by Paulo Bento, who Peres served as assistant at Greek giants Olympiakos). Peres tells KLU how "we talked for 45 minutes about my ideas and proposals. He said I will call you in two weeks if you are interested... Two days after, he called me, and it was very easy for me to come here. I heard many good things about Korea before coming here, so I didn't hesitate when offered the job".

A major attraction of this project for Peres was the opportunity for a 'fresh start', as an IPark side reeling from relegation and the loss of several star players searched for a new identity. Peres has implemented an attractive, passing style of football that is somewhat unique to K League 2, as Busan have become renowned for free flowing, attacking football, however it is his extensive use of young talent that has grasped many supporters' attention. 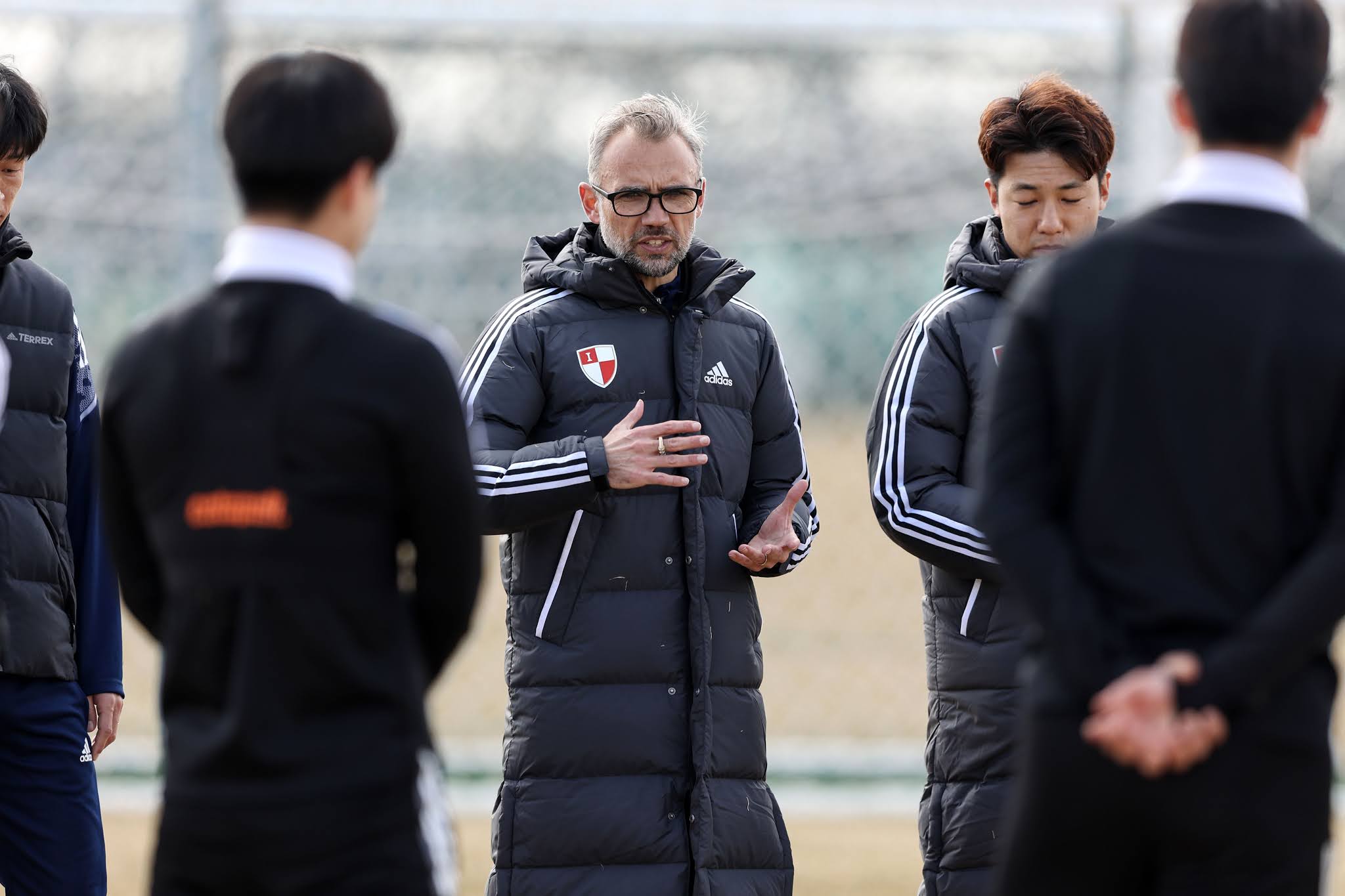 One key pillar of Peres' philosophy is the development of young players, with the likes of Park Ho-young, Choi Jun and Lee Ji-seung breaking into the first team this season. It is clear that the Portuguese coach takes great satisfaction from seeing his young charges learn from their more experienced teammates, as they develop experience and confidence. "It is rewarding when you start to see a team play in a consistent way, and you see your under 18 right back play like a mature player, alongside an experienced player that leads him according to the philosophy. Here you see the sacrifice of players for others on the pitch".

Peres has brought significant innovation into the club in his short time at the helm. The Portuguese's relaxed demeanour hides a serious and technical side to the coach, who has introduced the use of advanced data analysis and modern technology to Busan. From the use of GPS tracker vests to the introduction of a defensive zonal marking system (where players are positioned based upon the 'zone' the ball is currently placed), innovation has been at the heart of Year One of the new project.
Peres notes that "a very strong group of professionals for performance" analyse the GPS data after every training session. This informs the direction of future training sessions and conditioning plans as players are set up to peak on matchdays. The data analysis team also analyses the effectiveness of warm up exercises before the game. This has allowed pre-game warm ups to be adapted over the season, as the club looks to find the correct formula that allows players to be competitive from the first whistle, ensuring that players do not have to 'feel' their way into the match.
Technology has also made its way into the dressing room, with the introduction of in-game analysis. "We have an analyst, who is able to cut images during the game, which allows us to show images at half time on a TV in the dressing room. This can help us find trends and areas of improvement, which we can use in the second half". Peres cuts his own videos of match day analysis after games, as he personally breaks down the team's performance, always with a focus on the improvement of players to aid their development.
"Even the gym, we've changed. We found old machines that only worked on individual muscles, but our philosophy is to work all the body in each training session, so we had to change the tools for that". Peres believes that players have only recently finished the base of their training, and given the nature of the long term project, he believes that players are "a little bit far from their physical peak". Peres has lured compatriot Francisco Calvete to become the club's fitness coach after a seven year spell at Benfica, as the club aims to implement specialised strength and conditioning programmes for individual players, under specific training plans. Under previous management, players were left to their own devices to make their own training plans, which had contributed to Busan's lengthy injury list in the 2020 season.
This radical shift in thinking is very much in its infant phases. There are plans to introduce other technology used at top clubs in Europe, such as smart trackers that can improve players' sleep cycles. Peres believes that IPark can also learn from current innovations in other sports. Busan IPark are set to co-operate with the city's KBO side, the Lotte Giants - another side which has hired foreign staff, including an American head coach and R&D team - as they look to learn from each other's operations. One example cited by Peres as being utilised on the pitch is the 'three corridors' counter-attacking method, which was first used by the German National Team in 2012, but directly adapted from the tactics of professional basketball.
Extended version available on KLeagueUnited.com